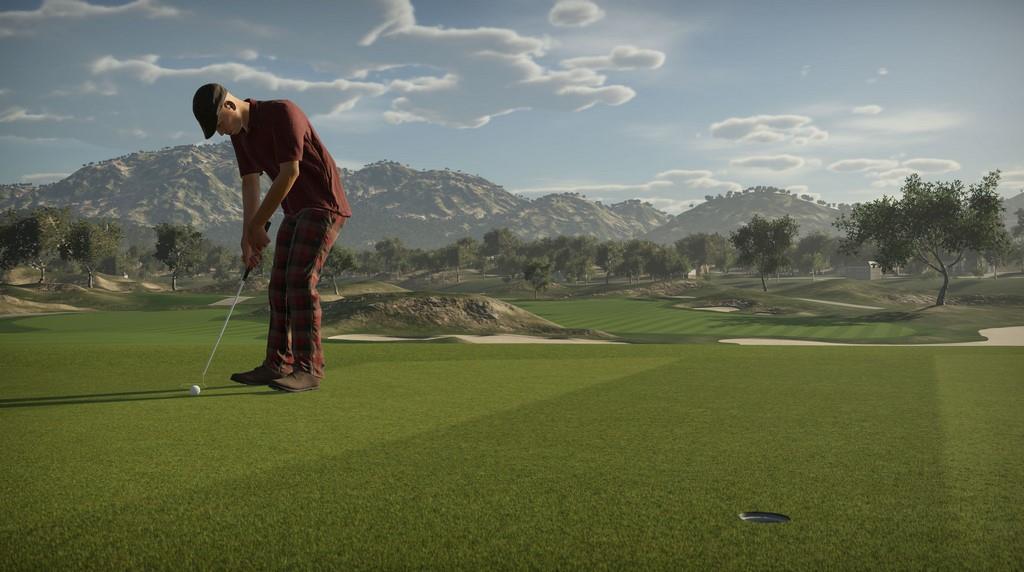 Starting up The Golf Club 2, you are asked “right thumb to swing, or left thumb to swing”. Without too much worry (even though I should have been) I selected "right" and the game moved on. The Golf Club 2 then throws you straight into a learning tutorial that you must complete to move forward. The game goes over how to swing for driving the ball; the way to chip; how to putt; and how to spin the ball. All of these things seemed like good helpers to get things going, but I was a bit concerned about the lack of control for most of the shots I was being taught.

After you finish the 10 minute tutorial, it is time to make your character. This is a strong point for the game as there is a lot of customizing here. Everything from differing clothes selection for each round, to shoe style, country, and so on. There are also new designs and items to unlock as you make money from playing. You can change the club types in your bag as well.

There are 2 one-player game options. One is the play option that allows a round without counting toward the season. The other is the  season option allows you to either set a tournament with multiple rounds or a season template of multiple tournaments. Either way gets you right to the heart of the game (the multiplayer was unavailable, but would be turn-based like the co-op play that I did with my son - which was good). There are 8 courses to choose from and all of them are rather pretty, though not the sharpest graphics in gaming. There are also no pro golfers here, so if you came to see Tom Kite, forget it. Once you choose the settings for the tournament, it’s over to the first hole. The game also has a five level difficulty setting, but as far as I could tell, the only difference is how good the computer scored. So far the game is very straightforward and seems like an easy game to hit a few balls. Unfortunately, this is where everything goes very bad.

Where I wasn't worried about the thumb sticks at the beginning, I I used 3 different controllers and for the life of me, I couldn’t consistently (and by that I mean I was 1 of 3 typically) hit the ball straight. Didn’t matter what club, or what tempo, the ball was almost impossible to hit straight consistently. By the end of 2 rounds, I was basically aiming right to hook the ball into the fairway. The back and forth stick was so broken that you couldn’t rely on any shot on the entire course. Most golf games have a setting to do an arc swing with the push of a button to make the shot, but this one is determined by a hope that the stick is calibrated correctly and none of mine seemed to be. The inability to have consistent good shots also hurts when putting it together with the inability to judge power. A putt that was five foot can still be an issue if you don’t hit it straight and it is downhill after the shot. You swing and are rewarded with a 14 foot shot back to try and save par. There is also no way to “crush” the ball as well. If it is a 4 iron that is good for 200 yards, you cannot hit it 215 by hitting into a red “overpower” area, it is just 200 yards. In the same respect, it is almost impossible to take a little off the shot at times because there is no way to know how far back will give you 10 less yards. Some games are a little too precise whereas this one is complete luck. 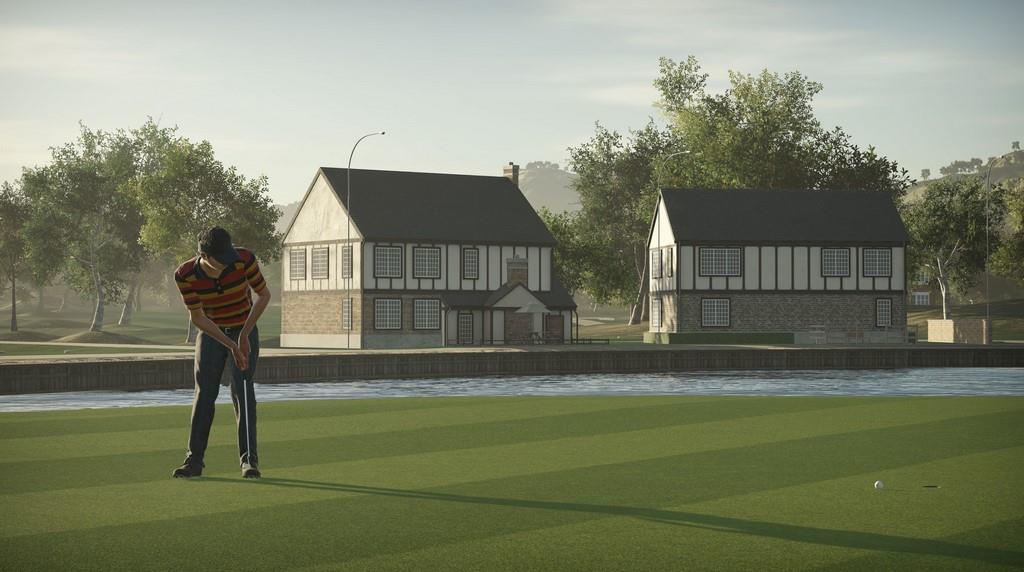 Another problem that goes along with the stick issue is there is no power bar to show how hard your swing is. Your back-swing starts and you have from rest to a point somewhere along the very top of your swing. That would be bad enough, but then it varies from club to club as to how hard a certain point on the swing is. Now take that and add 5 different shot types (chip, punch, etc) and you have a mess of possibilities. This sort of works ok for the drive, but it is lousy for chipping and putting…. and fairways… and bunkers… you get the idea.

There were problems with being in the short rough as well. It should change your shot by a couple of yards, however it can turn into 30-40 yards or more. Some of the deeper stuff can make a difference in your shot, but the shorter stuff should be at most another club higher. The worst flub in The Golf Club was the glitches in the game. The fans don’t scurry when hit at and the ball goes through them. You can also find yourself standing INSIDE a tree while hitting a golf ball... INSIDE a tree... that then ricochets backwards because it hits the other side of the tree. There were also a few times where the ball bounced in different directions than the lay of the land showed. The physics are just broken in places.

There are other small things that give pause with the nuances of the game. The music is very mediocre. There is really only one or 2 tunes in the game and it is repetitiously plain. Also, the announcers are awful in every way possible. There was one point I drove the green and because I went into the real short grass just behind the hole, the announcer said “well, I was wrong, that’s in the rough”. . Getting just off a green in one shot from anywhere on a course is a point of congratulations, but not in this game. He adds to the awful by mispronouncing iron incorrectly - saying “i-rin” instead of "i-earn" as seen in Websters Dictionary. The crowd also reacts kinda lame if you get a birdie or better. The cheering is quiet and weak and even though their are “golf-claps, most of the time a birdie gets a lot of celebration. Your golfer also doesn’t give a care that you just birdied for the first time in 27 holes (and sometimes it feels it). The greens are unreadable as well. You can’t read them well for the breaks and figuring the speed of down and up hills are dang near impossible. 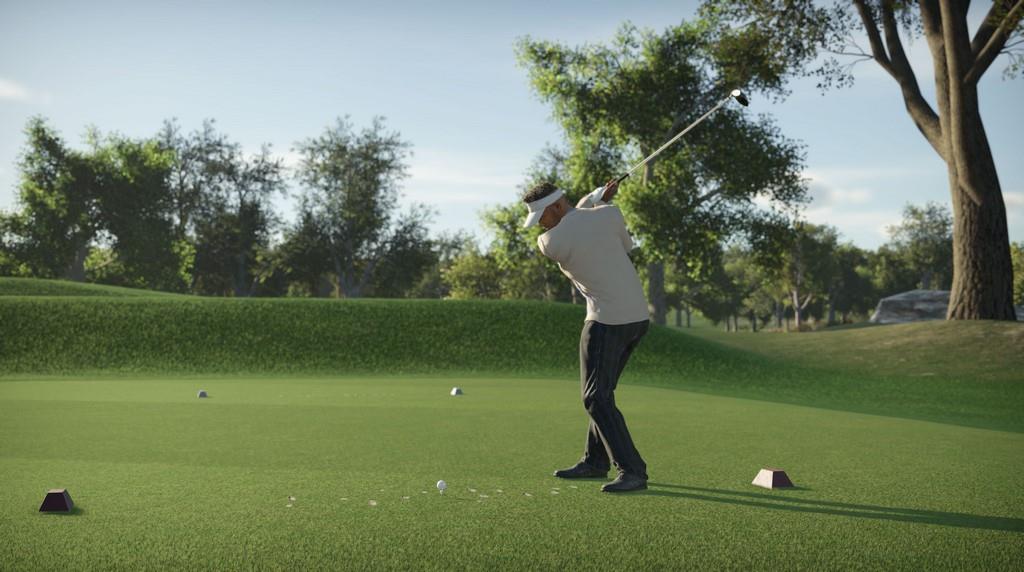 By the end of 4 tournaments (some 80 holes of golf), I was frazzled and annoyed. The best round I had was still +9 and the second 3-round tourney I played I ended with a +37. There is a lot of positives here to come away with, but the game definitely needs a lot more work. Every good thing about the game has 2 or 3 bad things that leave questions about the design and function. Why is there no power bar to help with shot distance? Why do they start you off with a 7 iron on some holes when you can easily hit a 3 or 5 wood? Why is the swing system so erratic? Why is the rough so unforgiving? In the end, you end up playing the type of golf that you can easily better at the local golf course.

The Golf Club 2 could have been a non-sponsored, better priced game as an alternative to the full-pro games out there, but it really needs a good shakedown to be a valid option. A better swing system, a better putting system, and an overall touch-up to the aesthetics (crowd, graphics issues, player) would make this a viable alternative to sponsored games costing 20-30 dollars more but have a fancy name on the cover.