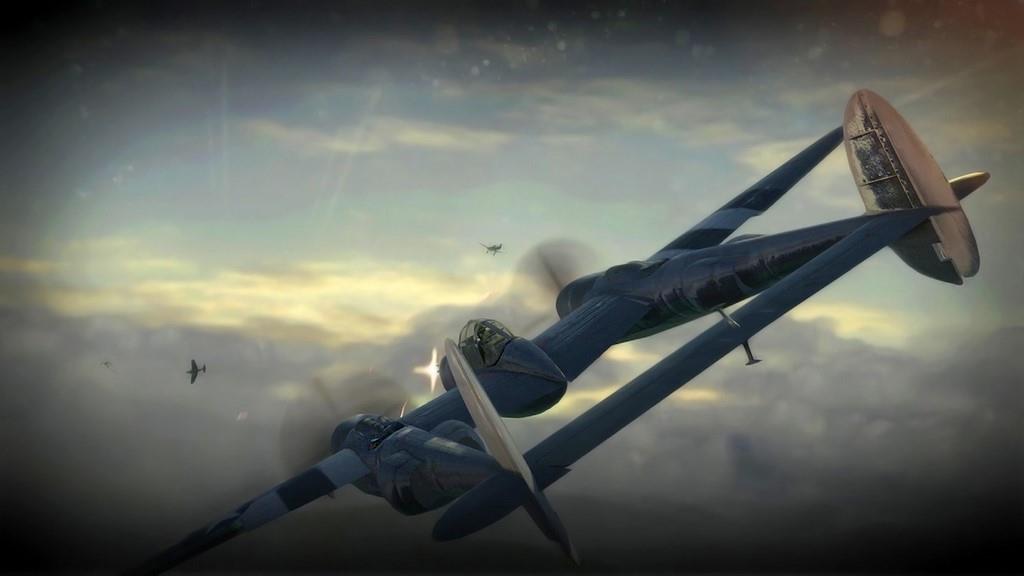 It was a close call.

I was this close to just giving up and calling it quits, which would have been a first when it comes to air combat arcade-style games, but after just shy of two hours of just trying to get through the tutorial, me and Iron Wings were just about done with each other. It was a lucky shot that finally got me through stage 3 of the tutorial missions and into the campaign missions.

I’m not sure that I wouldn’t have been better off quitting.

Story-wise, Iron Wings tries to do too much, what with the combination of paying homage to two very deserving groups: the Tuskegee Airmen, and the WASPs.

The Tuskegee Airman, also known as the Red Tails due to the distinctive paint scheme on their airplanes, were African-Americans that fought honorably and well in the air over Europe during WWII.

While these brave pilots deserve recognition, the cutscenes and in-game commentary weren’t up to the task. Much of the voice acting was stilted and so poorly done that I made liberal use of the Skip button. It’s not that it was all bad - there was what seemed to be a recorded interview with a former Red Tail that was interesting, but those scenes were mixed in with others that did their utmost to rub my nerves raw.

To be fair, I may be a bit harsh in my judgement as my pitiful performance in the tutorial levels caused an extreme amount of repetition in the same cutscenes and comments as I tried and retried each of the “easy” missions over and over and over. What might have only been mildly irksome scenes when seen once quickly became horrifically irritating from the constant repetition. Hence my use of the Skip button. 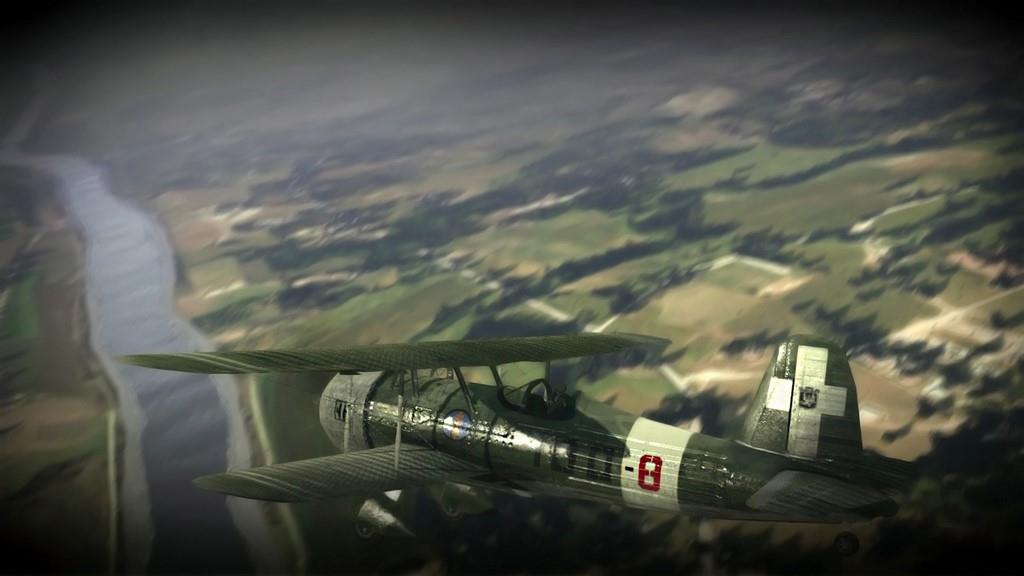 As long as I’m getting criticisms out of the way, I also had to grind my teeth at some of the historical inaccuracies. P-38 fighters are single-seat airplanes. A scene with two pilots sitting side-by-side in a P-38 caught my eye, yanked it out of my head, and stomped on it. Given that, you can probably guess how I felt about a P-51 taking off from an aircraft carrier.

This kind of thing is not unusual, but it is the kind of thing that makes pilots and WWII aircraft aficionados want to pull giant handfuls of hair out of their scalps. I have none to spare.

With the whining about inconsequential stuff out of the way, I can now pass along a good bit of news: Iron Wings scenery is top notch. The rain effects were particularly cool and I could have flown around in Free Flight mode just looking at the beautiful rendering of New York City for quite awhile, although it doesn’t take long to go out of bounds by doing so. Or worse, flying too low, getting scolded, and being gracelessly placed back to a higher altitude.

As far as game play, there are some nice features, one of which allows the game to be played in what is almost like a co-op mode. Some of the missions actually insist on it. For example, in one mission I was flying with a full load of ammo while my wing-woman was carrying the bombs needed to destroy the target. In true co-op you would just have the other pilot do it, but in Iron Wings you can jump over to the other plane to do the bombing. I think it might have been possible to order the other plane to do the bombing, bit the pace is so frenetic that I found it easier to just do it myself. 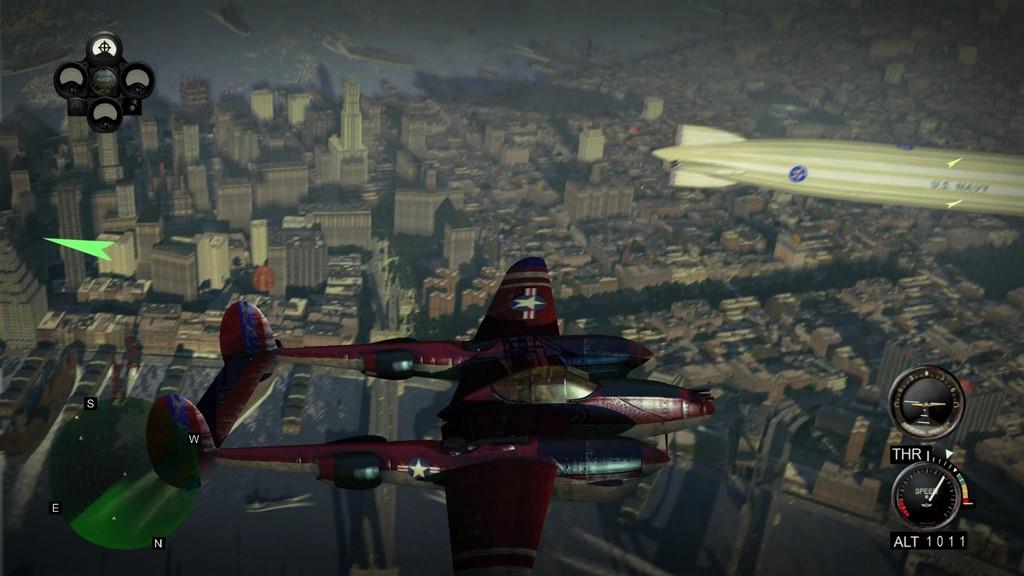 It was the same in dog fighting; it was easier to just do it myself. Note, however, that ‘easier’ is not synonymous with ‘easy.’  I found the flight controls to be very difficult to adjust to, and configuration options were notably shallow. Part of the difficulty came from being forced to use the left stick on the controller for primary control, and I very much prefer to use the right stick for that. There was also quite a bit of inertia in the flight modeling. By that I mean that it took awhile for the plane to respond to my control inputs, and equally bad, it also took too long for the plane to stop responding.

There is also a significant deadzone at the center of the stick, which exacerbated the problem described above significantly, but that could be more a factor of  the Xbox controller I was using than the game itself. In any event, it was the classic setup for PIO, or Pilot Induced Oscillations, which is when the pilot over controls and ends up bouncing the plane’s nose up and down. Practice helped mitigate the PIO to some degree, as did setting the sensitivity down in the limited config options, but I never really did get a good, solid feel for the airplane.

Another interesting novelty was the ability (and requirement) to be able to sniff out pertinent data by monitoring ground-based radio stations. This added something of a puzzle aspect to some of the missions in that the details required to satisfy the mission goals could only be retrieved by these means. Unfortunately, I found this to be rather irksome - it requires orbiting the radio station at a low altitude while fiddling with the controls to adjust the frequency of the plane’s radio receiver. This probably wouldn’t have been as difficult as it was if it wasn’t so dependent on precise control of the airplane, but in the event these types of missions were far deadlier to me than dogfights. 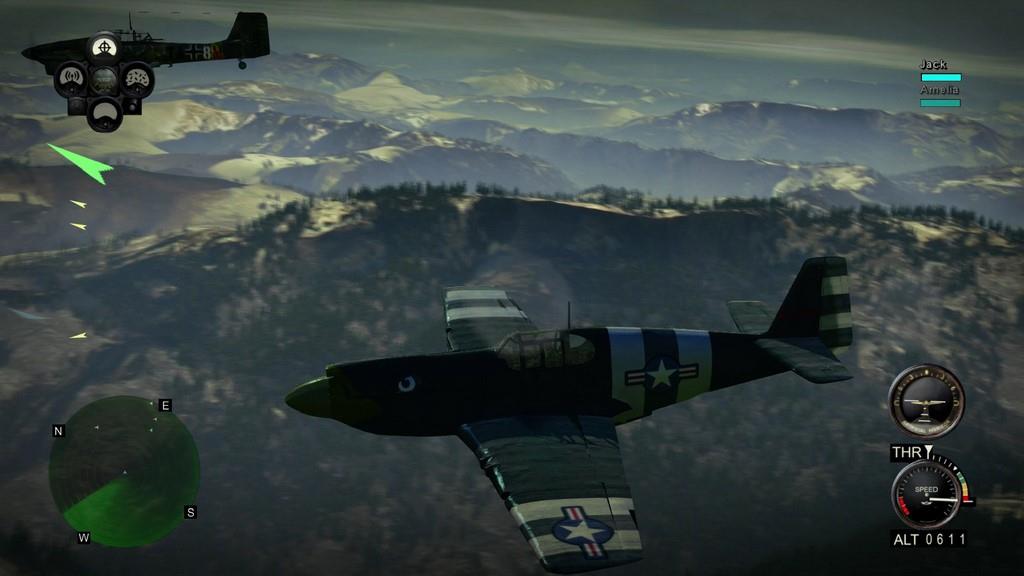 I also struggled with the way precision (down to the individual soldier on the ground) shooting scheme wherein you just keep the trigger pulled until either the gun overheats, or it zooms in to a close-up, bullet-time mode that allows for targeting single targets. I generally did better just by aiming in the general direction of what I wanted to kill and wiggling the controls a little bit until enough bullets hit it to kill it, but on the odd occasion when I was able to get the precision aiming to work, I liked it. I think my difficulty in getting the precision aiming to work arises from my affinity for 1st person mode - it seemed to work better in 3rd person mode.

At the end of the day, though, the thing that added the most difficulty was the timed missions. I hate timed missions. Early on on the campaign it was not uncommon to run out of time with just one or two enemies left to kill. I eventually realized that the best way to complete the dogfighting missions without running out of time was to simply ignore my teammate. It was very easy to waste time trying to focus the other pilot on an enemy when I could just shoot it down myself. Having the allowed time set so short negated any benefits that could be derived from using the more advanced targeting and wingman interactivity features. 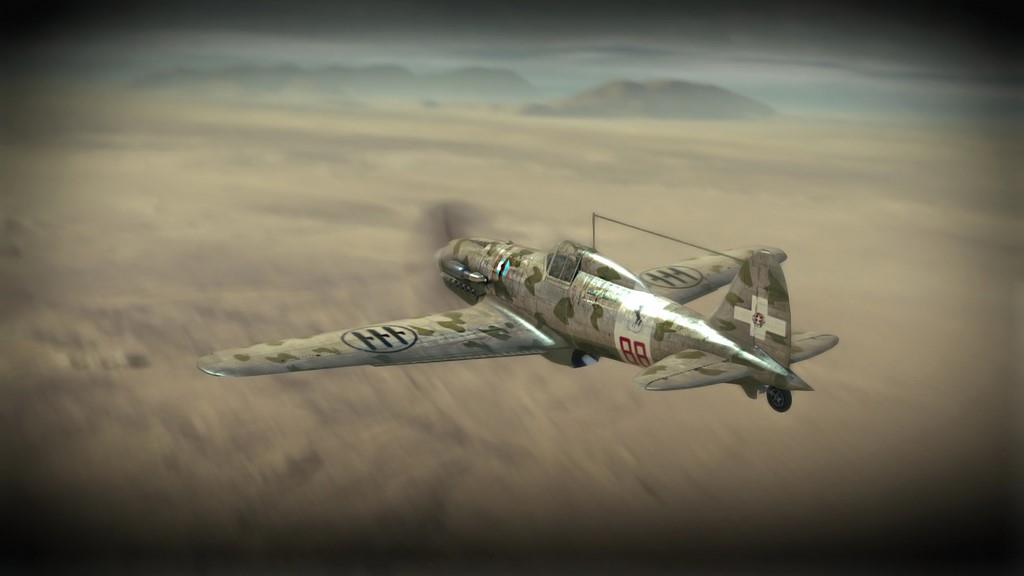 Another huge time waster was the target lock-on which seemed perversely interested in locking onto enemies behind me. Getting turned around to face those guys was time consuming and, if I happened to be in the 1st person mode, it was also a great way to crash the plane. This is a problem that I’ve always had with a padlock view, but it’s even worse if you can’t adequately control the airplane.

While I like where this game could be headed, the timed missions, difficult controls, and the amateurish narration kept me from truly enjoying it. Of those three issues, only the poor voice acting/writing is not fatal, albeit only because there is a Skip button. Even the timed missions could be made more bearable if they weren’t so overly restrictive. The ill-tuned controls and mushy flight physics, though, are hard to overcome.

Iron Wings shows a lot of promise, but is in need of some redesign of some of the more important game elements. The graphics are fast and beautiful and there are some interesting new twists to the air battle arcade model, but the current balance between challenging vs. downright frustrating leans to heavily towards the latter.