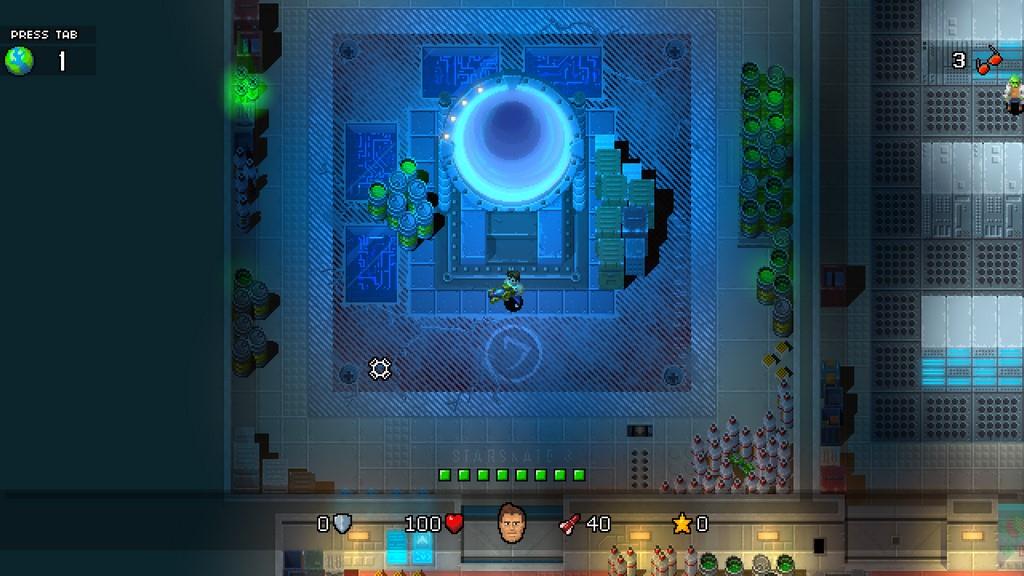 Written by Sean Colleli on 6/20/2017 for PC
More On: Serious Sam Bogus Journey

Serous Sam apparently likes to keep busy. Although he still hasn’t achieved his ultimate goal of killing the interplanetary alien conqueror Mental, Croteam’s affectionate parody/tribute to the action flicks of the 80s (and the first person shooters of the 90s) doesn’t let that small setback discourage him. Sam “Serious” Stone is the working man of the shooter genre; he’s appeared in four main-series entries, but in between those banner releases he’s showed up in a turn-based RPG, a 2D side-scroller and recently even VR. A twin-stick shooter seemed inevitable, and I’m surprised it’s taken this long. After all, Sam’s been doing his thing for nearly 17 years now. It’s sobering to consider, but Sam has been doing Duke Nukem’s job for him since when Y2K was a legitimate concern.

Serious Sam’s Bogus Detour is the twin-stick shooter the Sam franchise has always needed. Developed by Crackshell Studios and published by Devolver Digital, it recently made an appearance in Devolver’s mercilessly self-aware E3 2017 “press conference” where they were working on a way for you to purchase the game by throwing dolla dollaz straight into your screen. I think that prototype went off the rails a bit, but Bogus Detour survived unscathed, it’s out now and you should definitely consider spending your hard-earned cash on it.

You would think that an FPS and a twin-stick shooter wouldn’t really mix, and normally I’d be inclined to agree, but the Serious Sam series has a number of elements that make the fusion work surprisingly well. For one, Sam’s FPS outings differ from the typical corridor crawl in that they put you in a massive open space and then throw dozens, even hundreds of enemies at you at once. There’s nothing quite like splattering a mob of Gnaars with a well-placed rocket, or shattering vast herds of galloping Kleer skeletons with sustained minigun fire, and Bogus Detour replicates that action perfectly. It really doesn’t feel all that different from the main games, at least to a longtime Sam fan like me; it’s just played from overhead this time. 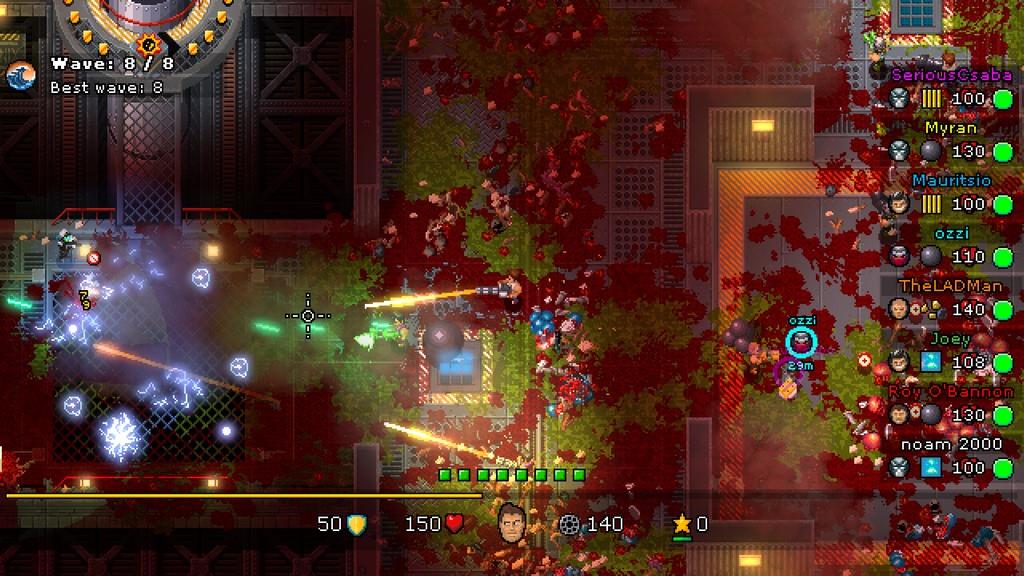 Sam is once again stuck in ancient Egypt at the beginning of the game, which is a bit frustrating as we’ve seen it so many times in the series, but the pace is eventually broken up by some tech bases and Mediterranean locales. The important thing is that these levels are huge—typically taking over an hour each to complete—and they lend themselves well to the insane mass-scale battles that Sam is known for. Each level is also packed with little secrets that lead to better weapons, armor, health bonuses, XP boosts or even full level-up points, feeding back into the understated but permeating exploration element that is present in all the first person Sam games.

Speaking of leveling up and gaining XP, Bogus Detour adds an RPG-lite mechanic that lets you build out Sam with a multitude of abilities spread out over three categories. These buffs range from dealing more damage when low on health to gaining penetrating bullets or giving all firearms minor splash damage. It reminds me of the persistent leveling in Shadow Warrior or last year’s Doom reboot, and while I acknowledge that this kind of thing annoys some old school FPS players, I honestly wouldn’t mind seeing it show up in the main series Sam shooters. That said it feels like it takes too long to gain leveling points, so some re-balancing would be welcome. 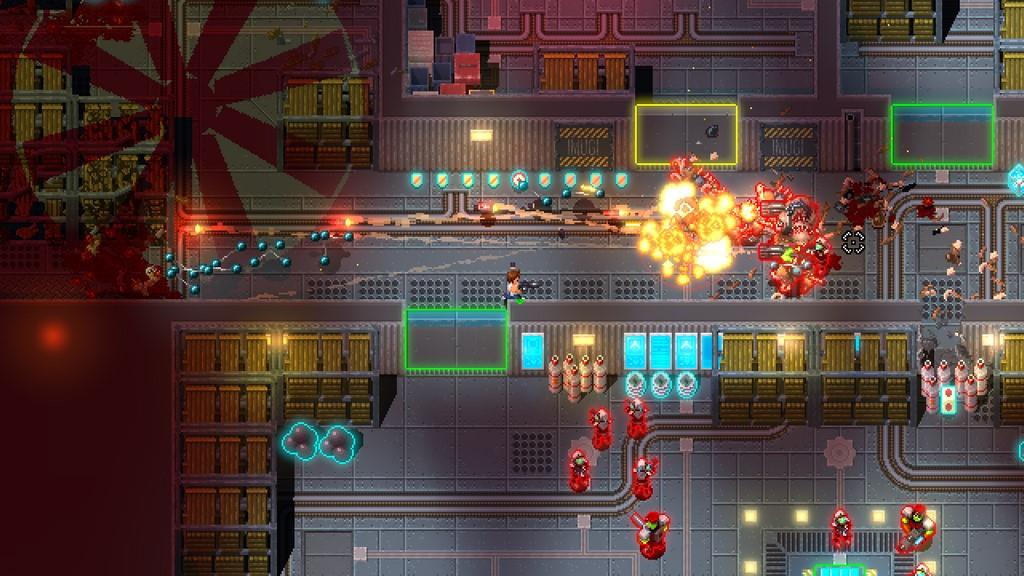 Longtime fans worried that too much RPG emphasis is junking up the Sam formula need not worry. This is still a game about decimating vast armies of enemies with frankly ludicrous amounts of overkill, and that means guns, guns, guns. Serious arsenal stalwarts like the double shotgun, laser blaster, flamethrower and gigantic cannon make a return, but there are some welcome additions as well. I won’t spoil too much—half the fun of these games is encountering crazy new weaponry—but there’s a new gun simply named “the Shaft” which fires a thick column of lightning that can fry a biomechanoid from across the map.

My only minor issues with the game seem to be holdovers from the twin-stick genre, namely an over-emphasis on hardcore difficulty. Bogus Detour is hard; it’s easy to get mobbed by a lowly group of Gnaars and torn to shreds in seconds. The main Serious Sam games are no slouch in the difficulty department, but Sam can take at least a few lumps and keep moving. It wasn’t until very late-game in Serious Sam 3 that I was feeling overwhelmed, whereas I was chafing under the difficulty of Bogus Detour’s first level on “normal” mode. Maybe I’m just slowing down, but the game also uses a checkpoint system and a limited number of lives. To an FPS fan, this is anathema—I kindly request my quick-save key, dammit. 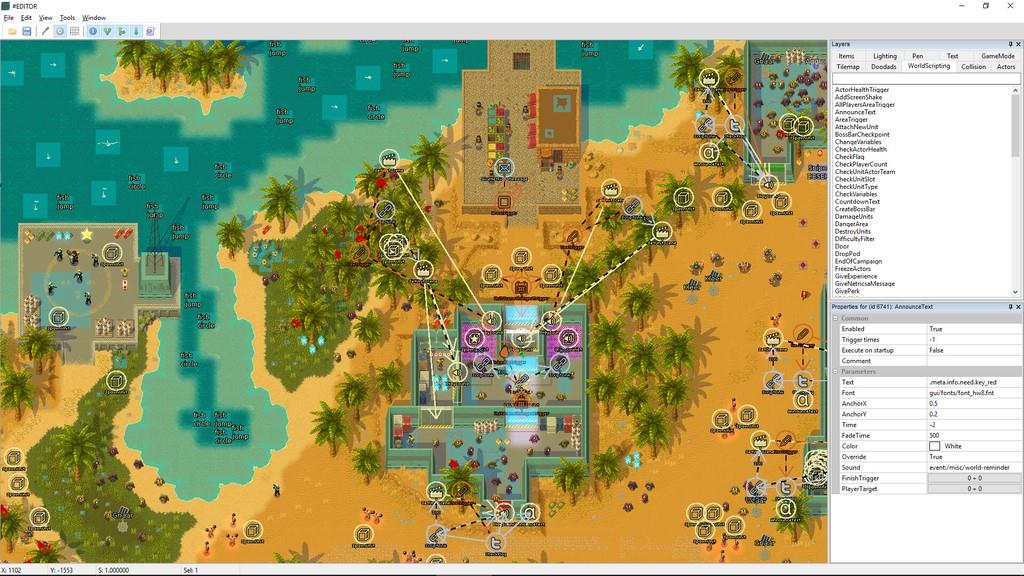 Difficulty and checkpoint annoyances aside, Bogus Detour is a ton of game packed into a very affordable package. Aside from the lengthy 10-level solo campaign, you can play the whole thing in 4-player co-op, which is just as insane as you imagine. In addition to that, there’s 12-player deathmatch, which flows well in terms of framerate but the action with that many players wielding such a colorful arsenal is positively bonkers. If that’s still not enough for you, Bogus Detour ships with a fully-featured level editor. This editor is no stripped-down toy either; it lets you build full campaigns and entire packs of multiplayer levels. I’d really like to see Doom’s Snapmap turn into something as formidable someday.

This whole package is wrapped up in a lovingly crafted pixel-art homage to the classic Sam games. Every weapon, enemy and environment is recreated in adorably chunky sprite art, and it all animates smoothly. You really feel like you’re playing some long-lost Serious Sam game from back on the Sega Genesis, or on PC from back in the Commander Keen days. The gravelly-voiced John Dick, DJ by day and Serious Sam by night, is back to growl out some humorous lines for Sam to quip upon encountering new guns or monsters. I’m glad the dude is still getting work; he’s a working man like Sam.

What it boils down to is Crackshell have imitated what Croteam, and Serious Sam, are best known for: quality and quantity. These games typically have a ton going on both on the surface and under the hood, and Crackshell has admirably translated that into a twin-stick shooter. We might be waiting for Serious Sam 4 for a while yet, but Sam’s Bogus Detour is a satisfying diversion that scratches that itch by putting a welcome spin on it.

Serious Sam: Bogus Detour does a fantastic job of distilling the Serious Sam formula down into a twin-stick shooter. While there are a couple hitches along the way, the game is a surprisingly robust package and a lot of quality content for a great price.