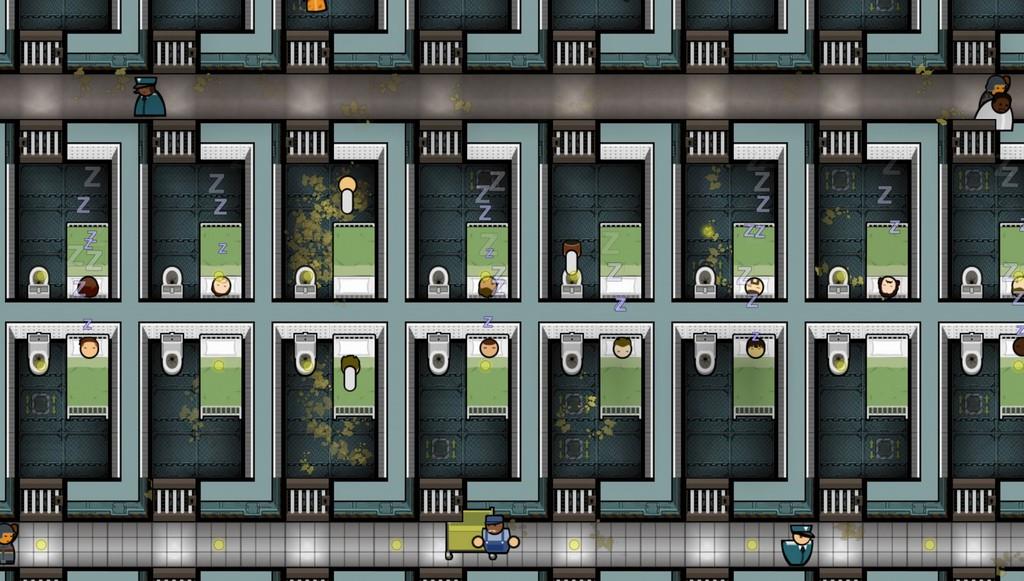 Written by Randy Kalista on 7/7/2017 for PS4
More On: Prison Architect

As the late, great rapper-philosopher Notorious B.I.G. used to say, “Mo’ money, mo’ problems.” That is precisely the risk/reward ratio you encounter in Prison Architect’s Psych Ward DLC. Psych Ward introduces a new level of inmate psychology to your prison: the criminally insane. Along with this new volatile personality, however, comes a corresponding bump in income and building options. But, as B.I.G. implied earlier, albeit in more eloquent terms: Increased revenue invites commensurate complications.

I wasn’t sure what would bring me back to Prison Architect. I’d run the gamut of prison operations. What more could I do with dudes in convict jumpsuits? I’d gotten ‘em in the door, gotten ‘em reformed, or gotten ‘em the chair. Not everybody’s end was so absolute. Depending on how awake I was during construction and expansion, some didn’t even have to do their whole time—some ran for it, finding a chink in the fence, or slipping out in some vaguely glitchy manner, out wandering through parts of the compound they didn’t belong. It still happens sometimes. You’ve got a bird’s eye view, but you aren’t the hand of God. Some things are just going to go awry, no matter how tightly you think you’re structuring things.

Psych Ward’s criminally insane convicts introduce a new top tier of crazy into your lockdown utopia. They’re on a level with maximum security prisoners, but even more volatile. More so than anyone else, the criminally insane constantly feel repressed, constantly feel on edge. They’re all ticking time bombs. One particularly short-fused stick of dynamite, let’s call him Johnson, came in through reception, spent one comfortable night in my newly built padded holding cell, then was escorted to his personal cell, likewise padded. The guards had barely shut the door before he was hopping mad. Within minutes he’d done hundreds of dollars in damages to his cell, not to mention himself, punching everything he could until he fell unconscious from his wounds. Johnson was just the first guy, on his first full day, and already the nurse was hoofing his dead weight to the med bay.

On the bottom rung of your prison are minimum security prisoners; clad in gray, these inmates are well-behaved and shouldn’t make too many demands on your staff. Above them are medium security convicts; they’re the orange-is-the-new-black inmates, keeping things, as their name implies, running at a medium difficulty. Maximum security prisoners get a red jumpsuit, pulling in double the income of your orange guys, and making you earn it, too. Then there are death row inmates, the men in black (which is probably not a color any warden would ever put a prisoner in in real life), but it works for simplicity’s sake in a visually uncomplicated game like Prison Architect. 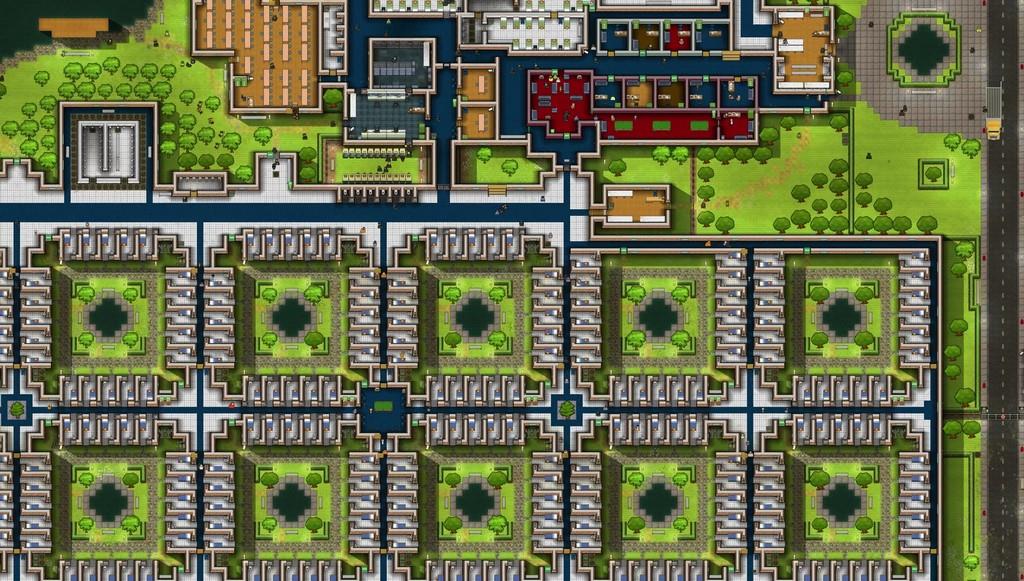 Criminally insane prisoners come clad in white and pull in as much income as death row inmates—but you can request a larger number of them than the death row guys. It’s a cool $5,000 per month to house the criminally insane, though it requires “insane security” to keep them in line. Dressed in white, the color of their prison uniform implies the chemically unstable nature of this new tier of prisoners, and hints at the white straitjackets these troublemakers could find themselves wearing.

Not easy bringing them into your facility first thing, though. The criminally insane require a separate wing. They require those nice, white-padded walls. You can’t even put them in a regular holding cell, let alone a regular prison cell. They’re probably already going to knock the toilet out of the wall, the bed out of alignment, and even tear the drain out of the floor, but those padded walls help (not prevent, but help) them from injuring themselves too much.

But building padded cells is the easy part. You need to work on the criminally insane's reformation and high-maintenance needs immediately. Again, they’re already at a boiling point, and they only cool off a few degrees when everything is going perfectly. Every little thing sets them off. And, by definition, they pretty much don’t care if they have to shank people in the lunch line in order to communicate their feelings. Hire a psychiatrist—not just a psychologist—in order to get these dudes on a couch to start unpacking their emotional baggage. 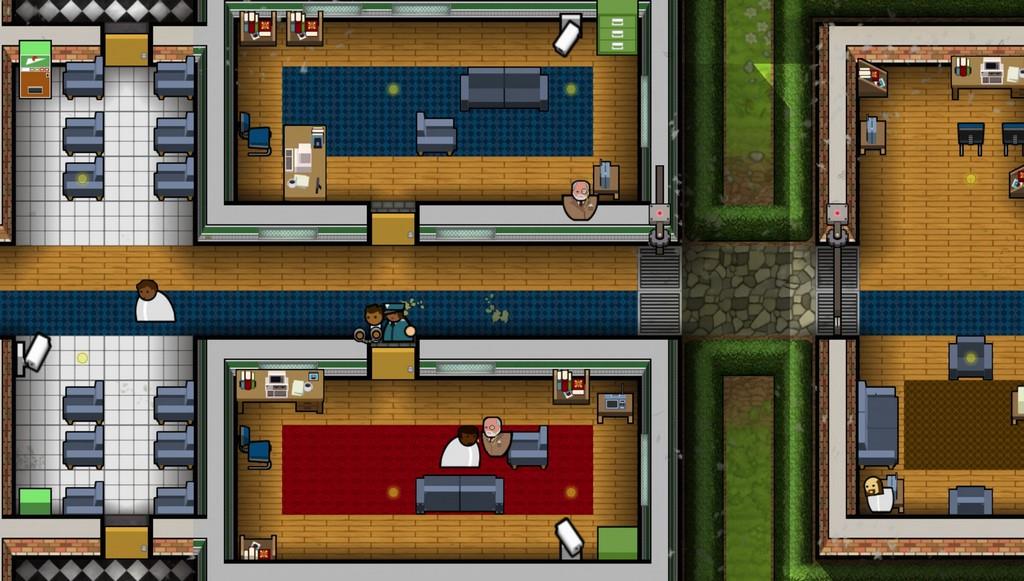 There is a new warden in town, too. Dr. Slugworth. Cutting a slender profile in his own white lab coat, Slugworth is more willing than most wardens to bring the criminally insane under his wing. Sure, the psychiatric appointments his prisoners attend are 20 percent more effective than other wardens'. But you’re population intake is also going to get a higher percentage of the criminally insane to deal with.

When they arrive, take a look at them. Your average prisoner might have one or two quirks in their Reputation. They might be strong, for instance, or fearless. But just click on one criminally insane character and you’ll have a whole fun house full of crazy going on in that prisoner’s head. Take Adam Leversedge. He just got off the bus yesterday, and his Reputation is already packed from left to right. He’s stoical, criminally insane (of course), an insomniac, he’s depressed, he has outbreaks, and has an addiction to deal with, all on day one. Why can’t you be more like Samuel Ryback, Adam Leversedge? Ryback is a max security inmate, but at least he’s taking out the trash; he doesn’t even have a Reputation.

One of my personal favorite features of Prison Architect are the biographies each prisoner arrives with. Pysch Ward doesn’t expand on this feature, though. There’s still only the few Mad Libs-like write ups for each prisoner. There’s the plain old write up that simply states what they’re in for and how long. There’s the “_____ was caught in a _____ wearing a _____ and wielding a _____” kind of bio. And there’s still the special bio for prisoners that engage in software piracy. Cheeky! But there’s nothing new about the biographies for the criminally insane. Not that I’m seeing, anyway. Too bad. 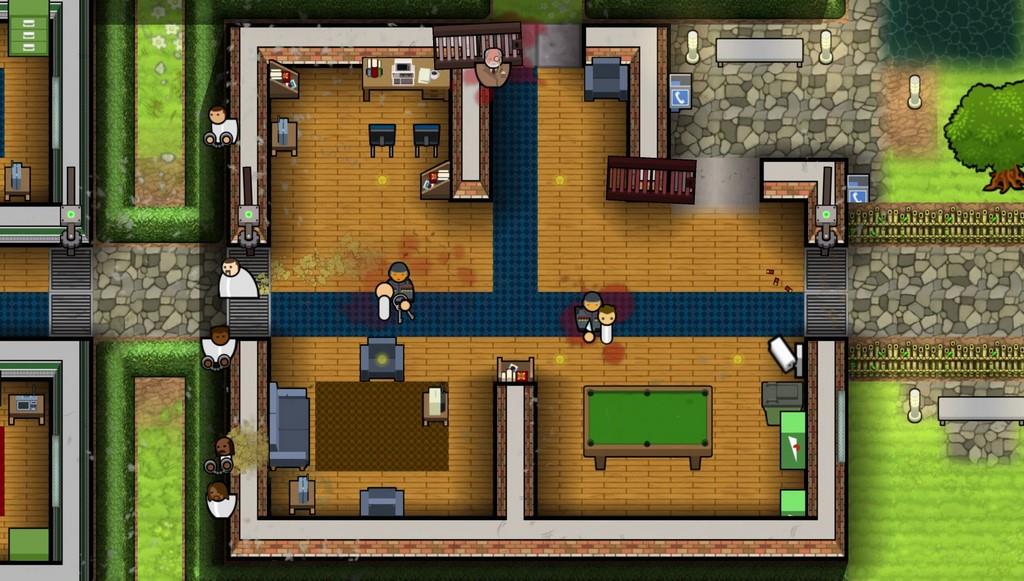 So, Psych Ward pumps up the difficulty level with lucrative but highly dangerous criminals. If you just slap them in with the routines of your existing convicts, it may go poorly, since these new guys may straight up feel suppressed and do absolutely nothing when guards are even around. Or your regularly scheduled lockdown hours may prove too much for them, pushing them over the edge when your lower security prisoners were doing just fine.

Psych Ward tests your capabilities as a prison architect, but it’s doable. You’ll need to pay closer attention to individual criminally insane prisoners, sure, but that’s exactly where Prison Architect needed to expand. The convicts’ biographies aren’t anymore entertaining. But inviting the criminally insane into your complex give you an excuse to construct a fresh wing of your prison, just for them, and to really dial in to the hour-by-hour procedures of how you run things, and the minute-by-minute reactions of your insane security prisoners. It’s not tough hiring a couple psychiatrists and wrapping a few cells in white padding. It is tough, however, making sure these new, volatile prisoners don’t rock the entire boat because they’re ready to riot at a moment’s notice. You may even have your seven-year-old come into the room and say, "Dad, should you pause? Because a bunch of new prisoners just showed up and somebody is already dead."

Psych Ward can feel small, but its intent is to draw you back in to the even smaller lives of the criminally insane. Likewise, you'll have to make small but important design shifts that require more attention than your regular prison wings. But if you build with purpose and intent, you just might be able to reform the toughest customers introduced to Prison Architect yet.