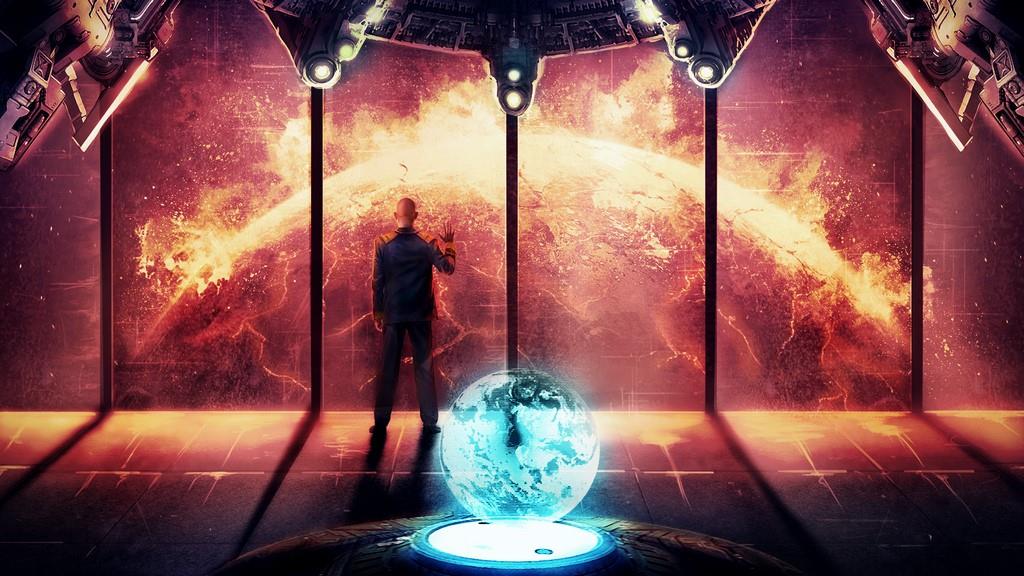 There is a certain sweet spot that 4x games (eXplore, eXpand, eXploit, and eXterminate) should always be striving to hit. It's that balance between tedious micro-managing vs. being left with too few infrastructure options coupled against the pace of an exploration balance that forces you to reach out into the unknown vs. having everything you need come too easily. That sweet spot varies slightly player to player, some might really enjoy the city/settlement building aspects of expand and exploit while others want to get on with the exploration of every corner of the map and the extermination of every opponent therein. For the most part, Dawn of Andromeda rests comfortably around that sweet spot. It is well polished and well paced.

The basics of the game is one played across maps of galaxies broken down into connected nodes of small planet clusters. Scout ships are used to map out the terrain and discover new worlds and resources, research vessels and mining ships to exploit resources, colony ships to settle new habitable planets, space stations to protect those colonies, and armadas of warships to conqueror opponents. There are internal politics to sort out as your various governors give bonuses and penalties across and array of social and economic points. There are external politics to sort out by balancing your relationships across all of the other factions of alien races and pirates populating the map. Each of those factions have their own relationships and actions can have rippling effects across allegiances and enemies. Win conditions can vary from merely surviving a given length of time, to eliminating a specific faction among the many on a board, to some other special goal. For all of the politics and maneuvering, the end game often involves military force. If not to crush your enemies and hear the lamentations of their women, then at least to have a strong enough military to fend off any challenge attempting to hear the lamentations of your own.

The first thing that impresses me about Dawn of Andromeda is that, for a smaller studio, Grey Wolf Entertainment really put together a well presented game. Menus, maps, controls, everything is laid out well with a seemingly effortless presentation. It is as easy to navigate the world as it is to jump around the menus juggling your infrastructure, army, relationships with other factions, and even internal politics. For the most part. The soundtrack is pretty much cosmic elevator music and I do have a quibble with the general development of colony infrastructure but we'll get to that. 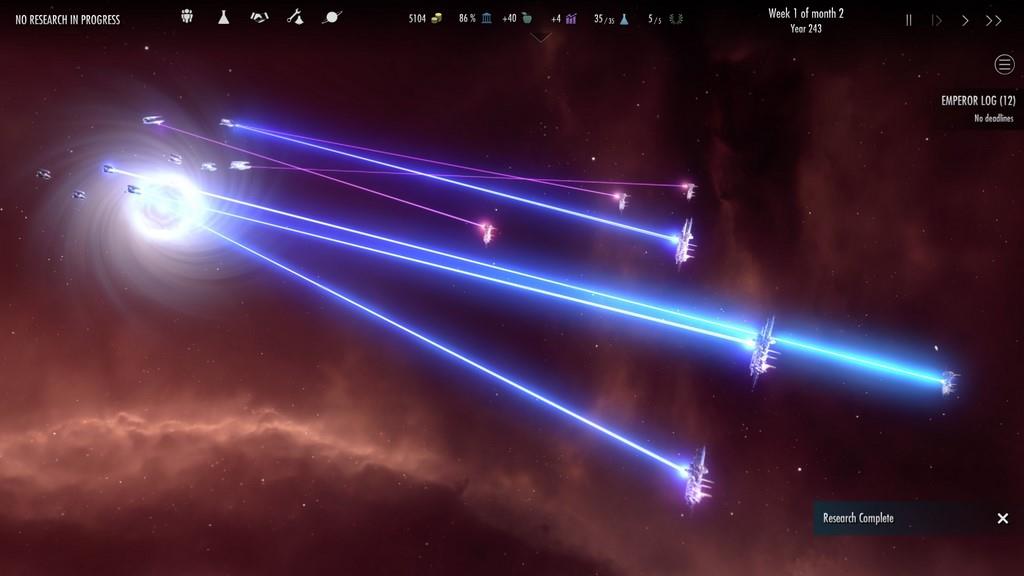 There are also plenty of options for each playthrough to stay fresh. One thing I think Grey Wolf really pulled off well was the story mode, or "Eras." There are a series of eight different predefined maps populated by a progression of factions that weaves an over-arching narrative throughout these ages. Each Era stands on its own and there is a natural difficulty progression as the factions increase, maps grow larger, and available technologies increment from each Era to the next, along the passing of time. Within these Eras you can choose which faction to represent offering an opportunity to re-tackle the challenges from a different perspective, with different advantages and win conditions. And there there is the free play mode where a few option screens open up any type of game you'd like. Load the map with factions or limit to a few. Set the opponents aggressiveness and tendencies. Start with home planets or colony ships. Play across the expanse of a massive map or enjoy the claustrophobic chaos of smashing everyone together on a small one. There is also a decent measure of random and side quests and stories interjected into each game. The options to load up a game are plentiful, and then how you play once that game is loaded is up to you. For the most part.

While the game offers plenty of avenues to achieve your objectives, there is a basic strategy that seems nearly impossible to deviate from with any success: build up an army quickly. Exterminate is a pillar of a 4x game, after all, and in a way this warning is probably a testimony to the effectiveness of the enemy AI. Because if they catch a glimpse of you with an underdeveloped military no matter how early into the game, they seem all too eager to wipe your race from existence, despite any of your adept political machinations. In the end I found much of the eXplore, eXapnd, and eXploit was just window dressing for the eXterminate. There was definitely a notable benefit to the other X's, but could only be realized in the context of having a strong military as quickly as possible. Exploration could lead to leaps and bounds in research and research times affording end game weapons quicker than any foe, but without that strong early military presence you'd never have time to build those guns before each colony was plucked from underneath you. Colonies themselves seems a waste of resources. Your well developed home world on which you begin is usually lucrative but the time and cost it takes to actually colonize, build up a planet, and get a significant revenue stream from it, it is much easier and quicker to prep a few dreadnaughts and just take someone else's that they put all that effort and expense into. 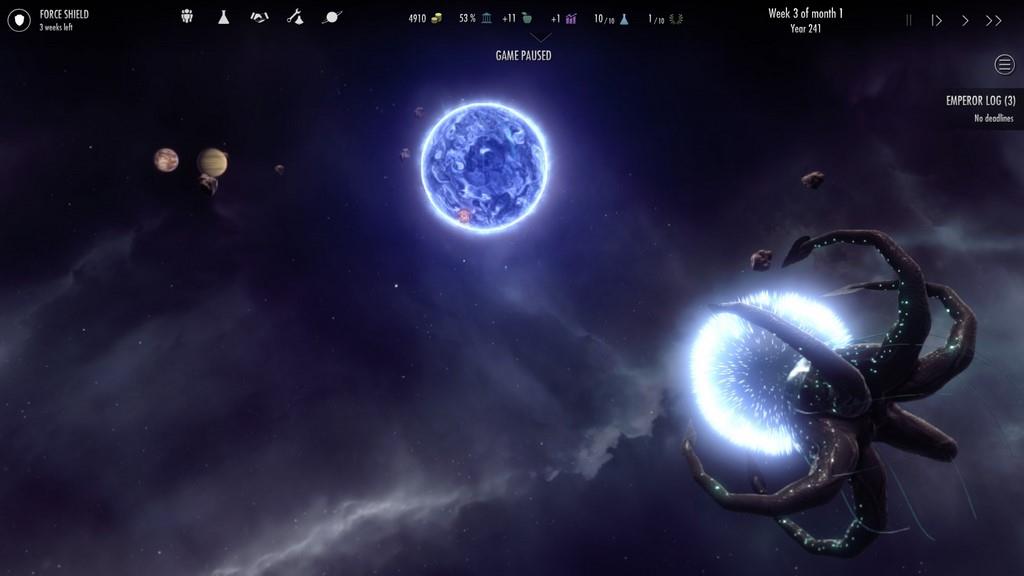 Also, building up a colony, infrastructure, productivity, housing, all of these fiddly bits are never really explained in the context of this game. Maybe they borrow from core 4x concepts, maybe they differ slightly, but the game is loathe to clue you in on it. There is a helpful tutorial that interjects naturally as you navigate the world and brings a natural flow to the learning curve. That bit is done very well, however it is only an effective tutorial for the most part, because it completely glazes over the nitty gritty of colony management and development.

4x games live and die by finding that sweet spot: give me something to do but don't make it tedious or too easy. For the most part Dawn of Andromeda hits that spot. Though unexplained, the micro-managing of colonies and infrastructure doesn't bog the game down. The Relationships and politics provide bonuses and set the stage but don't overwhelm the arena. The AI is clever. They expand, build infrastructure, form relationships and alliances, and pounce on perceived weakness. I guess it's a shame that I found much of the game elements just seemed to support warmongering. In the least that military is essential to keep the jackals at bay, but it also end sup a much more effective and efficient strategy to expand an empire. I would have liked to see relationships and politics as a more viable option, and perhaps in the hands of a better player it is, but that wasn't my experience.

With smooth gameplay, a well constructed narrative, and AI that is sufficiently intelligent; Dawn of Andromeda offers enough to overcome its learning curve and keep replays fresh. There will be a learning curve because much of the nitty-gritty of managing settlements never really grace the tutorial or hints, but after a few matches, likely leading to a few annihilations, much of the game management, must-do's, and politics fall into place. It errs a little heavy on the necessity for a strong early military, but I guess that's just the proof that it exists in the space of a hostile galaxy.