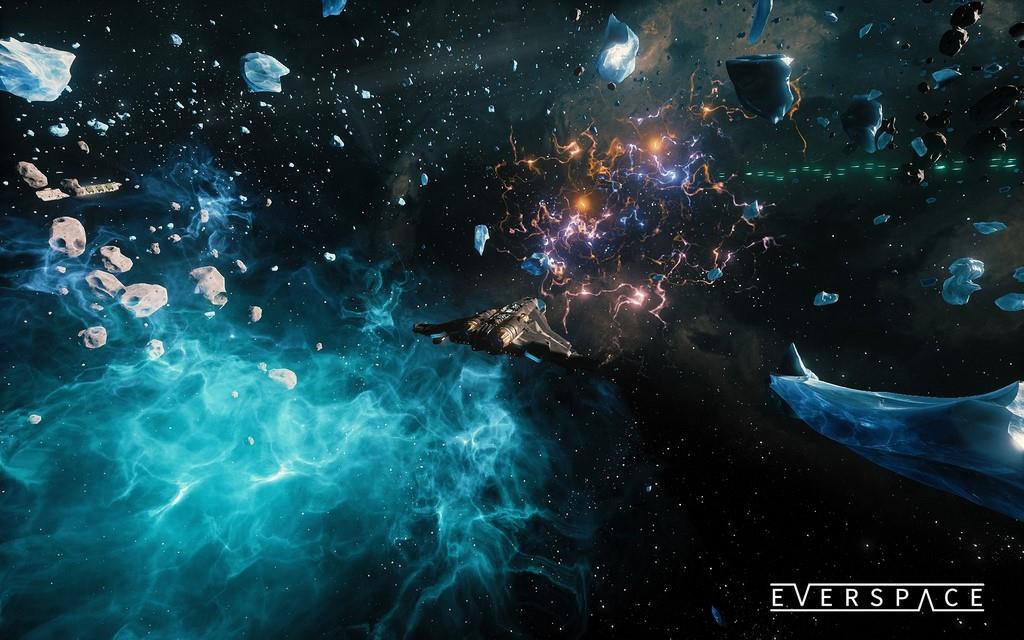 The hardest part of writing about Everspace is that playing the game is significantly more fun than writing about it. Every time I would pick up the review I would need to fact check something, which lead to more hours with the game, which took me away from writing the review. This isn't a complaint as much of an excuse as to why this review is so late.

One, Everspace is one of the leanest, most focused games that I have ever played.

And two, Everspace is a game that continues to surprise me, even after 40 hours of gameplay.

As someone who supports software development teams, I appreciate it when development teams do a lot with a little.  Everything in the game has a purpose and there is a high level of refinement and polish that is rare in modern gaming. Usually this means that once you've played the game for a bit, you've seen everything. But ROCKFISH Games keeps things fresh long after you would expect everything to go stale.

Everspace is a space combat game with roguelike elements. Think of it as a combat-focused version of Elite Dangerous—but with all of the boring trading and mining bits removed. You are Adam, a scientist who wakes up in a cloning center with no memory of how or why he got there. He sets out to recover his memory, which means traveling the galaxy looking for clues as to who he was and what happened to him. Along the way he has a friendly AI to guide him and to offer the occasional one liner.

I was surprised at how good the dialogue was between Adam and his AI cohort.  It's not going to win a lot of awards, but there are good lines, and the dialogue doesn't wear itself out.

As you journey across the universe you will run into four different species: Okkar, Outlaws, G&B, and the Ancients. The Okkar are a reptilian race that was at war with the human Colonial forces. You will find remnants of this war in almost every sector you traverse. Outlaws are ragtag bandit force that will pick a fight with anyone. G&B is a mining organization that is usually friendly and indifferent to you unless you upset them. The Ancients are a surprise that I don’t want to ruin, but let’s say they are another group you don’t want to upset.

Everspace lets you pit these enemies against each other. So if you are ever overwhelmed you can always boost away towards another group, then let those two fight it out. This is important as the game throws more and more enemies at you. This includes larger capital ships which are almost impossible to take down by yourself.

To regain his memories, Adam must travel across seven sectors of the galaxy. Each sector is made up of six or more nodes. Jumping from node to node requires 20 units of fuel. You can jump with less but your ship will sustain damage when you try. Fuel can be found from blowing up enemies, mining resources, and from raiding G&B fuel depots. You don’t have a lot of time to dally in each system, though, as there is a massive Okkar force in hot pursuit. There are a few systems where you are safe, but you usually only have five minutes in a system before they show up.

This series of constraints is why I love Everspace. Each node is a race to scavenge resources to upgrade or repair your ship while making sure you have enough fuel to make the jump to the next node. Attacking a G&B fuel depot is always a last resort, but sometimes you have to do what you have to do. I found that luring Okkar/Outlaws to a depot and then hiding behind a fuel tank would cause them to blow up the tank and allow me to stay on G&B’s good side. 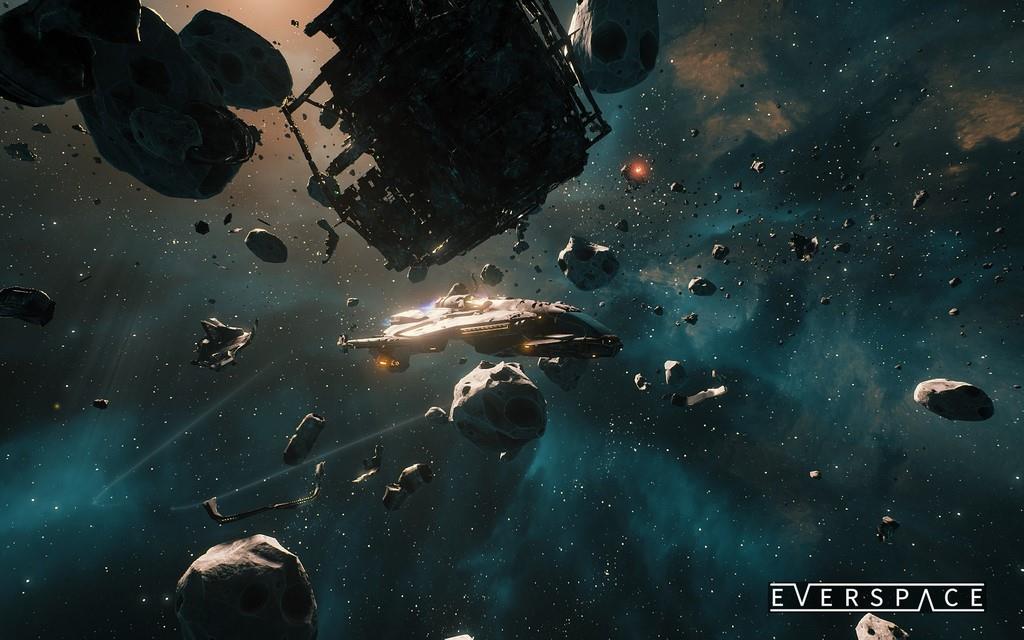 You are going to die…a lot. And this is where the roguelike elements come in. Each death is the loss of a clone and the transfer of Adam's consciousness to another clone. This resets your progress through the universe but you pick up things that can help you on your next trip. Depending on the difficulty you select each trip will take between 10 and 90 minutes to complete. Thankfully you can save the game at any point, in case you need to step away.

Another thing that helps Everspace stand out is that some nodes have the hulks of old Colonial ships floating around in them. These are mini-puzzles where you can unlock caches of weapons and resources. These can be a source of great rewards, but they are lined with turrets and mines so you will have to balance out the rewards of exploring one with the risk of having to start over from scratch.

You earn credits which can upgrade your current ship, unlock the other two ships, and buy new pilot skills. You will also find blueprints which can be used to construct new weapons and accessories for your ship. The amount of credits you earn will depend on which of the three difficulty levels you choose. Picking the easiest will decrease earned credits by about 25 percent, while playing on the hardest level will net you 25 percent more credits. There are times when you will want to grind credits via the hard mode, while there are other times you'll want to grind through the story via easy mode. Personally I played most of the game on the medium setting as it was a nice balance between the two.

One of the few things I didn’t like about Everspace is that you have to spend all of your credits before starting a run through the galaxy. Sure they were only a few hundred credits, but over time that could have added up quickly. It’s an interesting constraint, but the money-saver side of my personality found it grating.

Everspace is easily one of the prettiest space games on the market. ROCKFISH does a great job of showing off what Unreal Engine 4 can do. The universe is bright and well rendered. The development team went for more of a pretty universe than one based in reality (unless space lightning is a thing I don’t know about) but the result is incredible. The game is pretty much space porn, if you are into that kind of thing, and the game includes a camera mode that allows you to capture some of that beauty. As a matter of fact, all of the screenshots for this review were captured by me using the in-game camera. 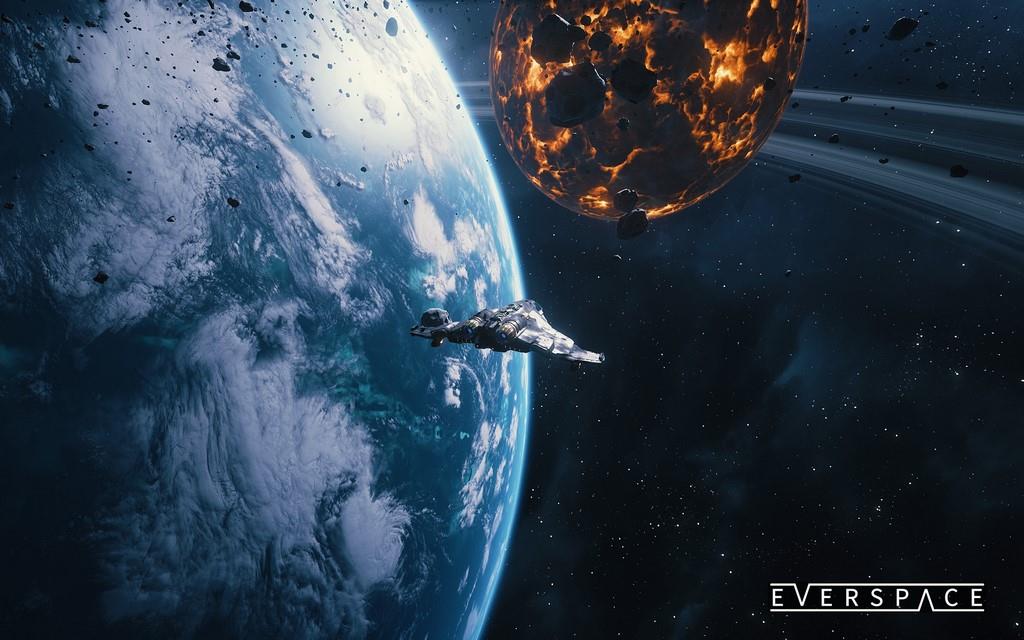 You can play the game with a third-person view or two cockpit views. Personally I found the third-person view to be the most helpful, especially when maneuvering through asteroids and ship wreckage. If you have a compatible VR headset, the game does have an outstanding VR mode, but you will need to use a mouse and keyboard, controller, or HOTAS to control your ship.

While we are on the subject of controls, I have to say that Everspace has some of the best and most precise controls of any game I’ve played. You have a complete six degrees of freedom to control your ship, which allows you to pull off some crazy stunts. This is especially true when dogfighting enemy opponents as you can accelerate towards them and then instantly strafe or reverse direction when you get closer—all the while keeping them in your gun sights. Honestly I haven’t played a game with controls this great since 1994's Decent.

If you like space combat games you should be playing Everspace. The game is a lot of fun, well written, and is a model of perfect execution. One benefit of having a review come in late is that you get to see how a company supports a game post-launch. The team at ROCKFISH has already released a few patches, which fixed a few issues and added a new hard mode. At $29.99, this game is a steal as it delivers value that other games just can't touch.

Everspace is one of the best space combat games on the market today.  It's fun, beautiful, and a blast to play.