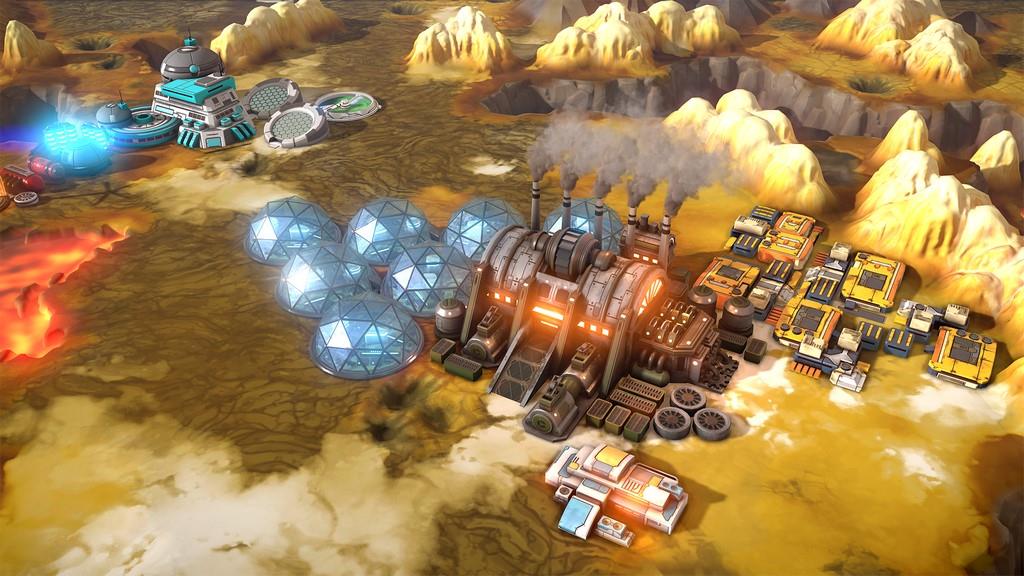 Written by Randy Kalista on 6/21/2017 for PC
More On: Offworld Trading Company

Offworld Trading Company, I like you. Admire you, even. But it seems that no amount of liking and admiration is ever going to get the two of us completely comfy. I understand that’s your intention. You released the Jupiter’s Forge downloadable content because you don’t want anyone getting too close. You want to shake things up. You want to mess with the winning formulas that players have concocted over the year since Offworld’s launch. You want to thoroughly disrupt those tried-and-true strategies—because without challenge, where’s the reward? And without reward, what’s the point?

Jupiter’s Forge sails past the inner planets and out to Jupiter’s moon of Io. Io is the fourth-largest of 67 known moons circling Jupiter, that Greek god of the sky and thunder. Also, Io has the least amount of water of any known astronomical object in the solar system. When it comes to humanity’s survival, that’s as bad as it sounds. If you thought Mars was a tough sell, wait until you’re pounded into a pulp on Jupiter’s Forge.

Jupiter’s Forge intimidates me. It’s difficult even mustering up the courage to play this expansion. After a year away from Offworld Trading Company, I knew I was not in fighting shape. I spent hours reacquainting myself with the basics, enjoying the well-written tutorial one more time, and going several rounds with the vanilla Martian campaign before even cracking open Jupiter’s Forge.

Power is prevalent, but water is indeed scarce, making basic necessities both a trial and a tribulation to produce. But as a counterpoint, due to that compiled level of difficulty, producing food can be even more lucrative on Io than it ever is on Mars. Here’s one example of how supply chains are royally messed with in Jupiter’s Forge. To build a greenhouse farm, you need power and water. Good luck finding raw water resources, however, so you’ll likely have to build a water processor. A water processor requires oxygen and fuel to run. Of oxygen and fuel, oxygen requires a solar condenser which must be built on ice, which also turns off at night, and for two hours every day when the sun is eclipsed by Jupiter itself. And the fuel requires an ion collector, which is subject to radiation storms (plus 100 percent production, but minus 50 percent shipping capacity). And then there are a ton of variables that can affect every structure, like the aforementioned earthquakes, not to mention the entire black market that runs rampant with piracy, labor strikes, and even less subtle acts of subterfuge. But that last part is all part and parcel to the Offworld experience. If you happen to do well and attract the negative attentions of your three opponents, it’ll be a long 42-hour Io day getting wrecked. 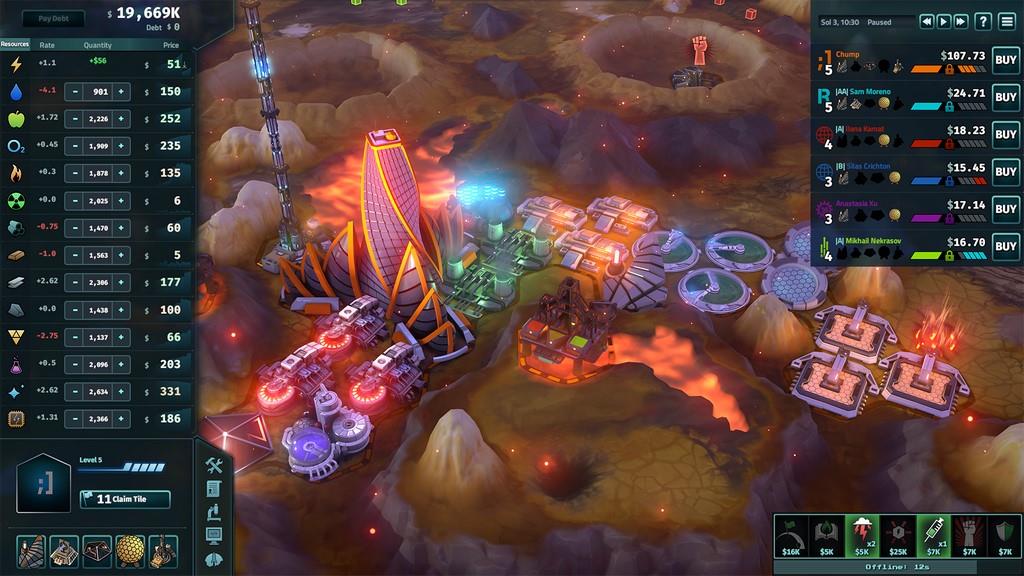 Jupiter’s Forge also introduces diminishing resources. Which is, ugh, fine, great. Resources are scarce enough in certain campaign scenarios, making it devastating when your low-resource hexagon suddenly flattens out to nothing. So punishing. But Jupiter’s Forge introduces two new playable CEOs with different ways to compensate.

Ezra Hoang of The Penrose Collective is crazy. Well, he’s not psychologically crazy, but his playstyle is. He drops not one, but two, HQs onto the map at the start of the round. This reduces commute times for traveling resources, and the two headquarters upgrade simultaneously. He even gets a freebie when it comes to swapping out hexagons that are no longer good for business. Ezra Hoang is wonderfully mobile because of this, and I enjoyed pulling up my tent pegs and moving onto better locations when my double- and triple-stacked resources diminished below acceptable standards.

Philippa Ndiaye of The Diadem Trust is a tougher nut for me to crack. Her biggest draw is that she can research any patent at any time, regardless if another character has already researched it. That’s huge. All her advanced buildings, like hacker arrays and pleasure domes, pump out a few more advantages than the other characters, too. I’m not good enough to take full advantage of all of them during any one round. But getting an extra land claim from the optimization center is always nice. And having the hacker array create a shortage and surplus at the same time is doubly effective, though I’m personally not the greatest market manipulator when it comes to that kind of thing. 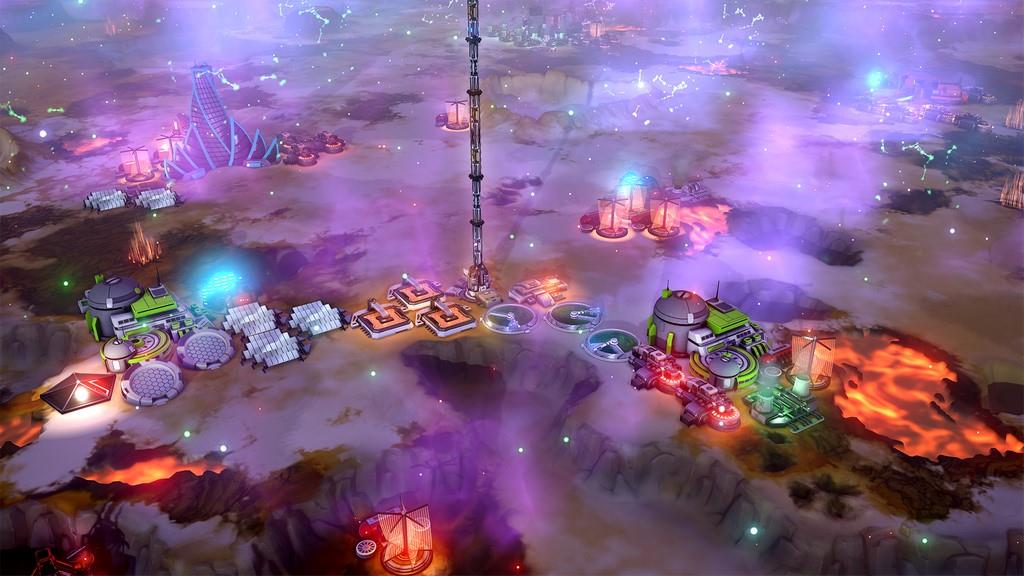 What’s remarkable to me, however, isn’t just the game of Twister these two bring to the table. It’s their stories. As in, they actually have a story. The other CEOs up to this point had backgrounds, sure; they had prevalent philosophies that informed their abilities. But none of them has the amount of words written for both Ezra Hoang and Philippa Ndiaye. Even for a story hound like me, it might even be a bit much. There are hundreds of words written about The Penrose Collective and how Ezra Hoang is a source of hope and inspiration amidst the crisis of North and South Korea, and how he takes deep breaths in order to refocus after I lose a round. There are hundreds of words written about The Diadem Trust and how Philippa first follows her father’s footsteps and then successfully steps out from under his shadow, not to mention her focus on close personal friendships.

Sure, these two new factions have some catching up to do, as far as making themselves known to Offworld players. But it’s a bit overbaked, even for my tastes, and I love me some good short fiction under any other circumstances. This sudden word attack also feels imbalanced in light of the older corporations not being given the same treatment. I like this introduction of deeper storytelling into Offworld’s sometimes economically dry narrative. I simply think more moderation is called for.

Jupiter’s Forge also adds an endless mode, with leaderboards spanning the Offworld community. Well, it’s not entirely endless: it’s a 1,000-map challenge, seeing how long you can survive Io’s death march before the environment and your opponents halt your progress. Pulling off a first-place win just once is hard enough, let alone surviving Io for hundreds and hundreds of maps.

Jupiter’s Forge is for the long-time players. It’s not an entry point. It adds a brutal new set of maps to play. It adds a brutal new set of conditions to work beneath. It adds two new intriguing corporations to play, both of which play very differently from the existing corporations. Plus, my favorite addition—even though I think it’s already too much of a good thing, in one sense—is a renewed focus on storytelling when it comes to surviving on Io and what brought the two new factions to Jupiter’s Forge in the first place. What this DLC says loudest, however, is that newcomers need not apply, and only players with a solid grasp of Offworld's fundamentals should brave this new landscape.