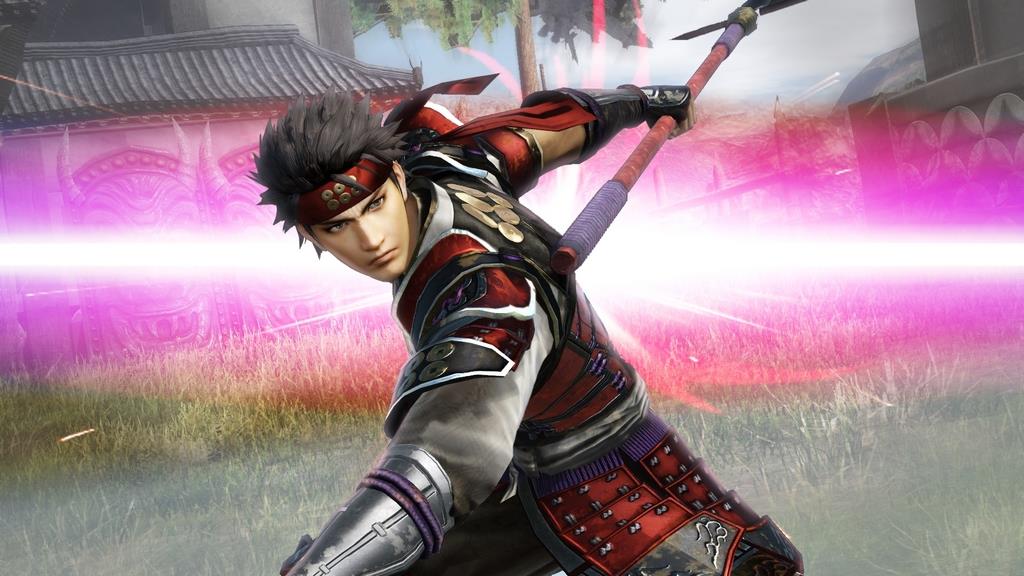 Written by Nathan Carter on 7/13/2017 for PS4
More On: Samurai Warriors: Spirit of Sanada

There are tons of games in Koei-Tecmo's Musou series of games. From Dynasty Warriors, Samurai Warriors and endless spinoffs, one would probably get bored of these games by now. I myself really enjoy most of these games. Yes, they are arguably the most repetitive games of all time, but they are an incredibly fun kind of repetitive and taking down thousands of grunts in seconds is always exciting. That said, it's nice to see them trying new things and Samurai Warriors: Spirit of Sanada does exactly that. The story of Spirit of Sanada is a pleasant and welcome change of pace from the typical Samurai Warriors formula, but keeps it familiar enough that Musou fans should feel right at home. It still maintains the signature 1 vs 1000 gameplay, but focuses more on story and RPG elements, making it another great game in the Musou series of games.

When booting up Spirit of Sanada for the first time, one would probably expect the same ole thing from a game in the Dynasty or Samurai Warriors franchises, but the game quickly shifts gears by presenting a story which focuses solely on the Sanada clan. Due to this, we are presented with a story focusing on Masayuki Sanada and the one person that most people are familiar with in the Samurai Warriors series, his son, Yukimura Sanada. By focusing on a smaller group of characters, and there are still plenty of other characters to play as throughout the story, this has allowed them to tell a story spanning decades that shows the rise of the Sanada clan. It's certainly an interesting take on the story compared to other Musou games which the story usually takes place through text or narration in between fights.

One of the first big differences you will notice is that when you start the game, and in between battles, you will make your way around your home base where you can talk to towns people, obtain side quests, obtain main quests and there are also mini games like farming and fishing which can be used to gain materials which can be used to sell to vendors, or be used to buy materials. Here you will also be able to buy new weapons and upgrade the ones you already own. Weapons can be upgraded in a variety of ways that fit your play style such as increasing the range of the attacks, the attack speed, or by generating more of your Musou gauge with successful hits. 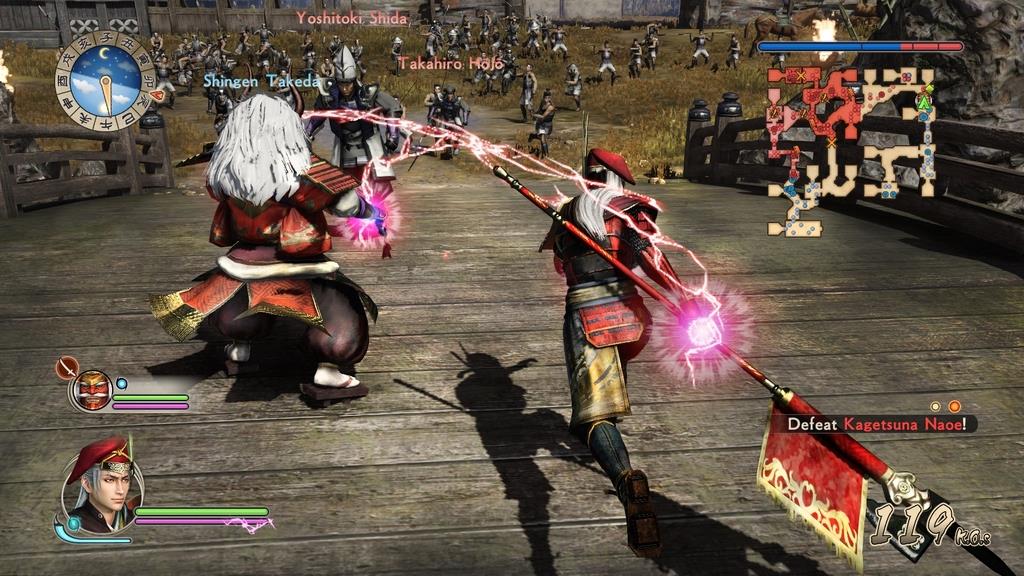 Battles in Spirit of Sanada are a bit different this time around. First off, there are various towns around the map that you can visit whenever you please. When traveling around these towns, you will usually end up running into enemies which are blocking certain locations. You can also spend this time looking for various materials that you will need to create or reinforce new armor and weapons. These missions are timed however and you will be forced back to your home base if you stay too long. I am assuming this is to prevent players from just staying in one of these towns and farming items forever. After a bit, you will be forced back to your home base where you can prepare for the next mission. Preparation is key and you will need to complete various tasks when playing through the game in order to earn "Strategems". Strategems have been present in other Musou games and with these you will be able to shift the battle in your favor when you are out on missions. For instance, during a mission you may be able to use a Strategem which then halts the enemy from gaining new reinforcements.

Spirit of Sanada switches things up by adding multi-tier battles into the game. These multi-tier battles are the familiar 1 vs 1000 hack and slash gameplay that you may be familiar with in other Musou games where you have to run around the battlefield, take bases, eliminate generals, and the battle usually ends after you defeat the boss for said battle. This time around there may be three or more different battles that need to be completed in order to proceed though the story. The game keeps things interesting by not always having the same type of battle each time. One battle may be having to stop the enemy from receiving reinforcements. Another battle may be to take out certain generals. 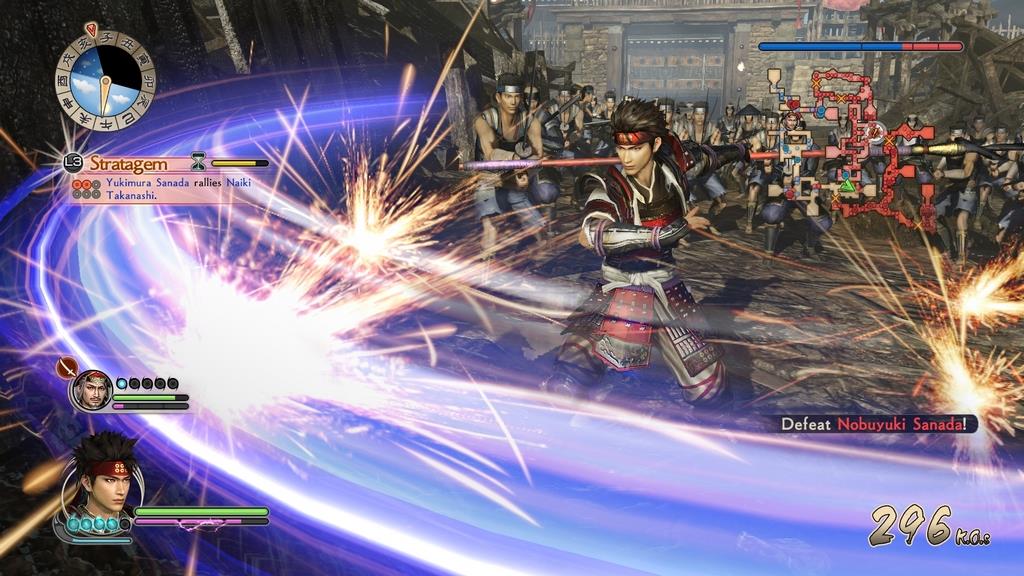 Then there are stealth missions, and these are absolutely horrific. Some of these will involve having to sneak around the battlefield while not being seen by scouts that will alert the base you are attacking. The problem is that if you are caught, you have no way of stopping them. Now correct me if I am wrong, but I don't think they had walkie talkies or cell phones during this time period, so I don't understand why you can't at least attack the scout that sees you if you are caught when you can do so in other missions. Even worse is that it's not exactly clear where you can hide. I will be standing behind a rock and I get spotted by someone on the other side. Prepare for some major trial and error with these missions. That said, it's a nice change of pace to the traditional formula.The traditional hack and slash format is still as fun as ever where you can eliminate hundreds of grunts in seconds and use super moves to wipe out the battlefield instantly. Of course there are the bosses that show up at the end of each of the battlefields and they are more relentless than ever before. Leveling up your characters is crucial and there are going to be plenty of times when you are going to head into battle, get to a boss, get cocky, and then you get destroyed in two seconds. Thankfully there are plenty of ways to farm for XP and you can even stack XP and quickly level up characters outside of battle in your home base.

By focusing on a single family instead of throwing hundreds of different characters into the game, this allowed for Koei-Tecmo to focus more on story and if you are someone that loves story in the Warriors games, then Spirit of Sanada will be right up your alley. It's a nice change of pace from the traditional formula and I would love to see if they made more Musou games in this style going forward. For those who have grown bored of the series, I would say that this is a great game to get back into with as there is more to do than just traditional style battles for the entire game.