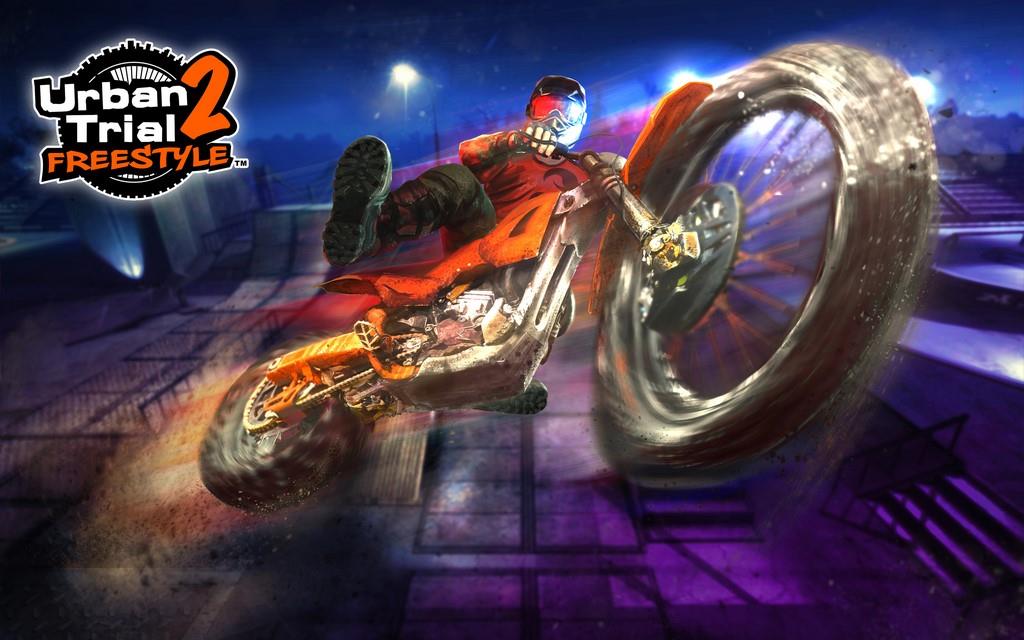 Back in  September 2013 I reviewed Urban Trial Freestyle, a motocross game where the goal was to complete each stage as fast as you can while also setting high scores for certain tricks.  When I first played it I thought it was okay, but nothing ground breaking as there were other motocross games out there.  Well here we area three and a half years later and I now have the chance to check out Urban Trial Freestyle 2 and see if any improvements were made from the original game as well as see if I’m any better at riding a motorbike.

In Urban Trial Freestyle 2 you play through several different areas with eight stages each in either a Time Trial or Stunt Mode.  In Time Trial the goal is to just complete a stage as fast as you can.  The faster you finish a stage the more stars you get (from one to five).  In Stunt Mode you’ll come across a few sections that will have you either jumping a large distance or jumping a certain height.  The better you do the more points you score which, again, gets you more stars.  Controlling your bike through each stage is rather simple: you can accelerate and brake when needed and you use the circle pad to balance yourself forward or back on the bike.  It will take a bit of time to get used to how the bike controls but before long you’ll be racking up those stars.  There are also times, similar to the original, where if you don’t take a certain obstacle just right you’ll crash and burn, such as trying to ride through a scaffolding where almost any angle you take it at will result in a wreck.  I even had a wreck just after a checkpoint because I took the pipe after it a little too fast and banged my head on the inside of it.

So what do the stars do exactly?  Earning an average of at least three stars across all eight stages in an area in either Time Trial or Stunt Mode will unlock the next area where you have eight new stages waiting for you to ride through.  If you earn at least a four star average on three specific areas you’ll unlock a new bike you can purchase in the shop (one new bike per area).  Finally, earning an average of five stars on every area in the game unlocks new challenges which I have no idea what they are because I have yet to get a five star average on any area in either Time Trial or Stunt Mode.  Similar to the original game, to get five stars on a stage you have to be pretty much perfect, get to the end of the stage as quickly as possible or learn how to pull off some insane jumps, and not crash once.  Each crash will deduct one hundred points off of your total when you finish and it’s already tough enough to get those points to begin with. 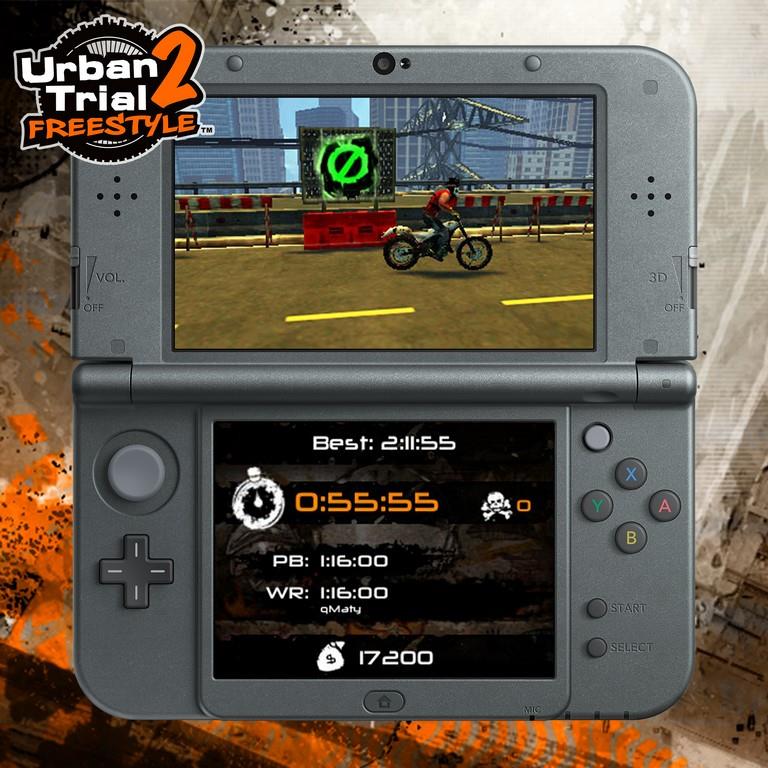 During a stage you can find some money bags lying around.  If you’ve already done well in the two modes, you might just want to explore the stage a bit and look for some money.  While the game does take place on a 2D plane, there are different routes you can take if you can pull off some of the bigger jumps.  You can use the money you collect to purchase new parts for your bike, purchase a new bike you’ve unlocked, or buy some new clothes.  Unless you really like the default parts on your bike, you might want to focus on that before getting some new clothes.  Each of the different parts will improve your bike a bit in terms of speed and handling.

If you played the original Urban Trial Freestyle then you know what to expect here in terms of gameplay and mechanics as not much has changed in those regards.  There are twice as many stages in UTF2 as there was in the original as each area now has eight stages instead of the original’s four.  However, one major improvement was in the track editor.  Before writing this review I actually re-read my review of the original and when talking about my “cons” so to speak, the way I worded it was kind of cringe-worthy as I noted the lack of anything online, be it uploading your tracks or any form of multiplayer.  Well there’s still no multiplayer, but I’m fine with that because a game like this doesn’t really need it.  I think I accidentally used the term “multiplayer” when discussing the online functionality in general.  Thankfully there is online functionality this time around so I have no reason to make that mistake again. 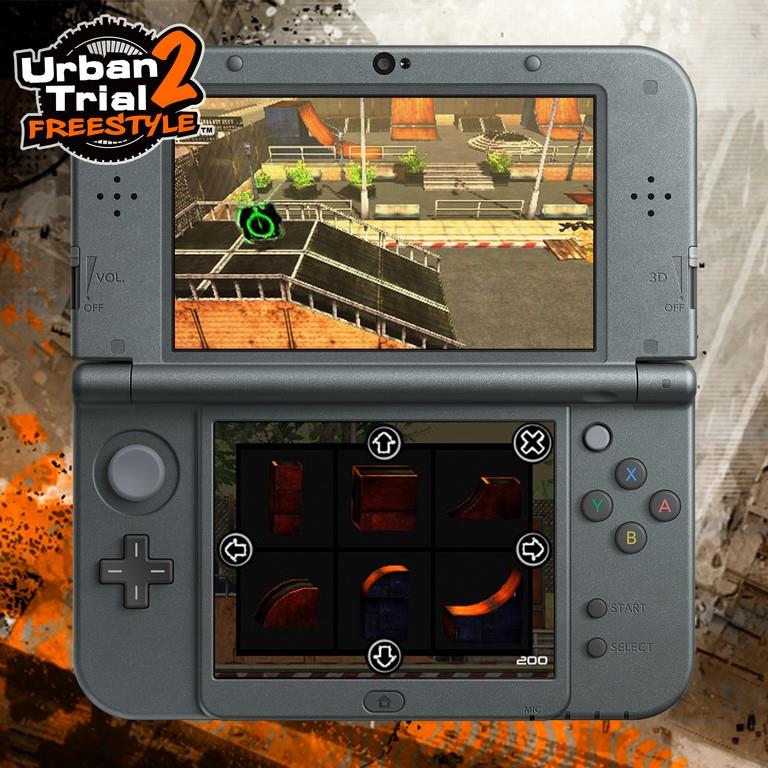 The track creator in Urban Trial Freestyle 2 is fairly similar to the original’s; you pick your scenario to create your track on, the stage is already laid out for you, and you just have to plop down the obstacles wherever you wish.  In UTF2 you also have more obstacles to choose from than in the original game, though the stages are already pre-set in terms of starting and ending points; you just have to set the obstacles.  However, a major drawback in the original game was you could create a couple dozen tracks, but you couldn’t share them with anyone as there was no online functionality aside from leader boards that I saw.  If you could upload your creations I couldn’t figure out how.  In Urban Trial Freestyle 2 you’re now free to share your creations with the world as you can upload your creations for others to check out.  Naturally that also means you can download tracks from other players…but there’s a bit of an issue or two with that.

First off, instead of just searching for a track based on the stage or difficulty or some other searchable thing, you have to have the track’s “track code”.  Granted I’m sure that’s not too difficult as people probably post their track codes all over the place online, but it still seems like a bit of a hassle instead of just searching for tracks.  Second, you can have thirty custom tracks on your 3DS, but that includes both your tracks and tracks you’ve downloaded.  Plus you have to actually navigate to an open save slot in the track builder to download a track to begin with.  Finally, and this is the big one, I’ve been having issues getting the internet connection to stay stable, and it seems to all stem from putting my 3DS in sleep mode.  If I close the system up and then come back to it later, the internet connection is suddenly gone.  Sometimes it doesn’t even help if I back out of the game and go back in; I have to completely shut down my system and turn it back on.  To make things even stranger, I’m guessing it’s the game itself that has the issue because I can get into the eShop just fine after hitting the Home button when this issue is present.

Overall, Urban Trial Freestyle 2 is an improvement over the original, but not by much.  There are a lot more stages now to explore and dominate leaderboards, and you can actually upload tracks for others to check out, but beyond that it’s basically more of the same.  Now don’t get me wrong, I did enjoy Urban Trial Freestyle 2 and if it’s not completely broke, don’t fix it.  It just feels like it’s not quite there in terms of internet functionality, especially with the connection issues I kept having.  However if you enjoyed the original game then you’ll enjoy this outing.

Urban Trial Freestyle 2 makes a few improvements over the original, but it’s not quite there in terms of network functionality.  The connection issues I kept having as well as needing to type in a code just to download a track made that a bit of a hassle, but at least you can now share your tracks online.  If you enjoyed the original game, you should enjoy the second outing with twice as many stages to dominate and more obstacles to trip up players with in the track builder.