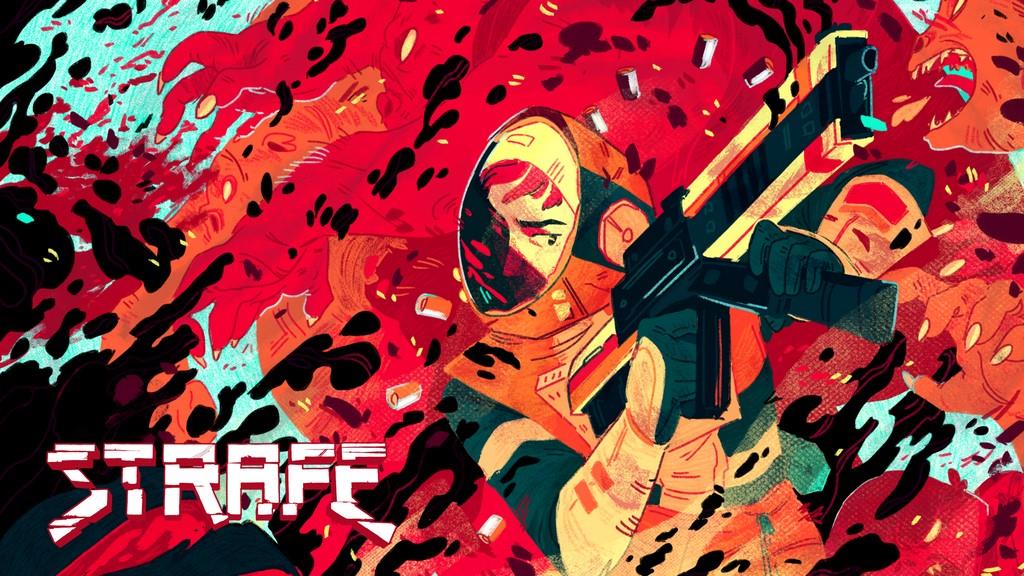 Strafe is not what I was expecting. Developer Pixel Titans billed it as an homage to mid-90s shooters, particularly the original Quake, and while Strafe is exactly that stylistically, in terms of gameplay it’s a whole different animal. This threw me off quite a bit, as I was essentially expecting a modern take on Quake after watching Strafe’s evocative and cleverly-cut trailers. To be honest it also disappointed me, which makes reviewing Strafe a challenge. Is it wrong to dislike a game just because it’s not what I wanted or expected? I’m not sure, but while I can acknowledge Strafe’s inherent value and the care and craft that went into making it, to say I wasn’t really let down by Strafe would be a lie.

Strafe looks just like it could be a “Quake clone” circa 1997. The visuals are composed of simple, angular polygons and the textures eschew any kind of filtering, as if Pixel Titans have never even heard of a Voodoo 3D accelerator card. It’s an art style that I have a lot of fondness for, as I basically came of age during gaming’s first foray into texture-shaded polygons and 3D environments. It’s clear that Pixel Titans has a lot of love for that era of gaming too, as there’s so much care put into the art direction and general feel of the game. Any schmuck with Photoshop can crank out sprites and claim their crowdfunded game is “retro”—Steam is saturated with such lazy half-measures—but it takes real skill to master this minimalist pixel art form. Strafe accomplishes this in spades.

The main issue is that Strafe is billing itself as something that it is not. It looks like Quake and at its most basic level it plays like Quake, but in reality it exists in a completely different genre. In fact its core gameplay conceit is fundamentally at odds with how those old 90s shooters were played. Shooters like Quake, Shadow Warrior or Duke Nukem 3D were at best based 50% on raw skill; the other half was about memorization, and a kind of instinct you developed from playing levels over and over again, both in single player and deathmatch. 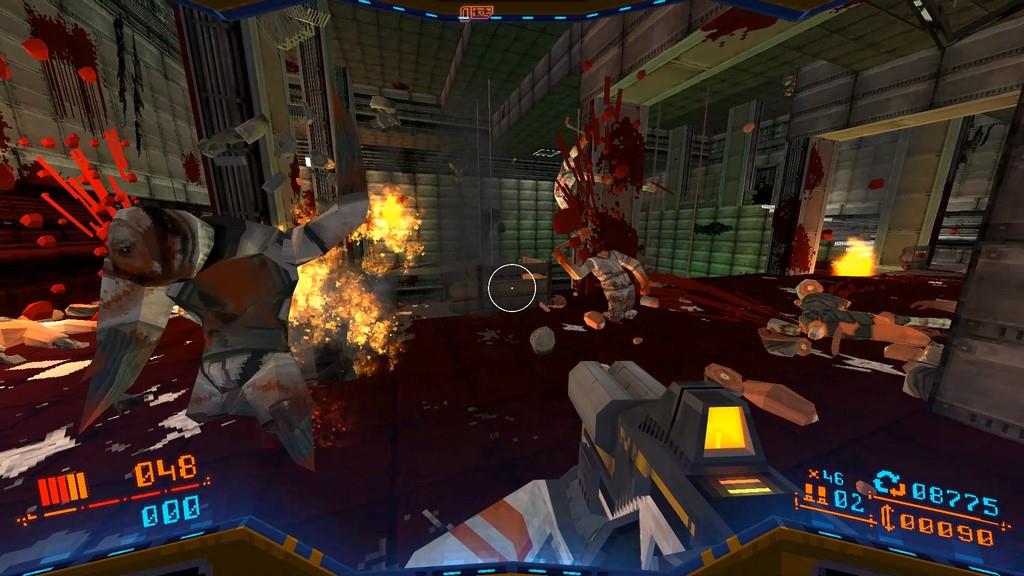 But Strafe isn’t a memorization-based throwback to 90s shooters, even though it is a first-person shooter. Strafe actually belongs to a much, much older genre: the roguelike. Its levels aren’t meticulously constructed labyrinths, but procedurally-generated random arrangements of lovingly crafted prefab modules. This can have advantages and it can even work for a shooter, but Strafe adopts a few more mechanics from the roguelike genre which ultimately undermine Strafe’s playability.

For one, in the tradition of most roguelikes, Strafe is fairly obtuse. It has a beautifully nostalgic tutorial, where a sexy model dressed in a labcoat details the gameplay basics, on what looks like a set for a trashy, low-budget scifi TV show. It’s basically a corporate onboarding video for fresh employees, or “scrappers,” tasked with retaking a mutant-infested space station. As the sultry host tactfully euphemizes the grimness and long odds of your new job, the video is intercut with playable tutorial segments where you learn how to move and shoot, collect items and buy upgrades. The whole thing—even the gameplay segments—is filtered to look like a scratched up old VHS tape. It’s beautifully done for a tutorial, but it isn't all that informative; as I got into the meat of the actual game, I still wasn’t quite sure how to manage inventory, use my map or buy upgrades. The tutorial also completely omits the item shop you’ll encounter between levels. 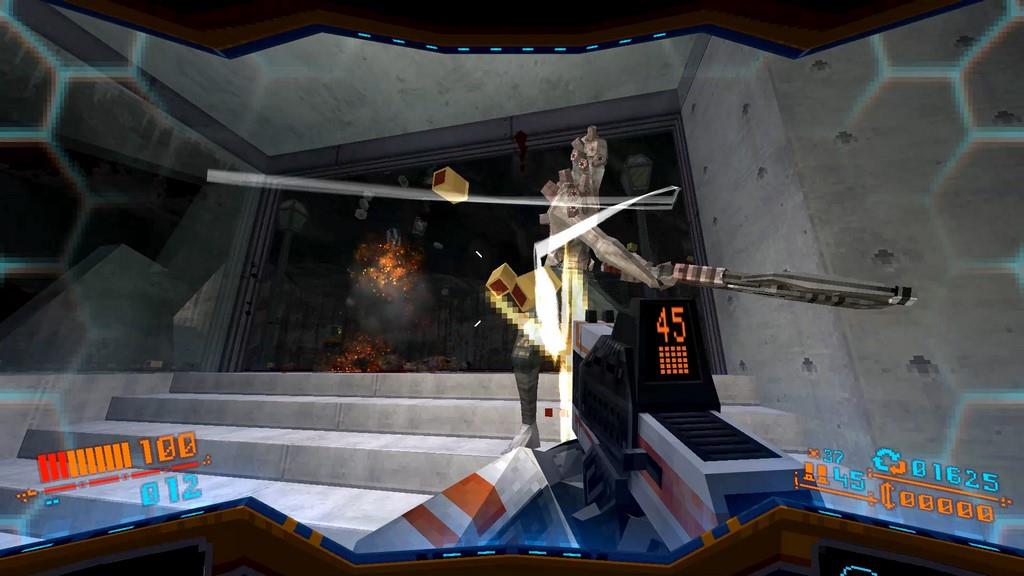 Strafe’s second big problem is something else it takes wholesale from the roguelike genre: it’s obnoxiously unfair and exasperatingly difficult. Doom on nightmare mode was difficult, yes, but every level was littered with health, armor, ammo, new weapons and godlike powerups if you knew where to look for them. With enough knowledge and practice a skilled player could eventually dust Doom even at its meanest. Strafe presents an altogether different format.

Strafe’s campaign consists of a procedurally generated “run.” At the beginning you must choose one of three primary weapons: a machinegun, a shotgun or a railgun. Each gun has a secondary fire mode, and can receive a number of upgrades. Once you’ve made your selection, you teleport over to the infested space station to begin your run. You are immediately assaulted by a variety of implacable monsters, robots and cyborgs as you make your way through the level. So far so good, but Strafe is shockingly unforgiving of anything but razor reflexes and indomitable will.

Each level contains only one health station with a measly supply of medpacks, a weapon upgrade station and a workbench for building armor and ammo. Strafe has two types of currency: scrap for use at the aforementioned workbench, and cash for spending on special-use items at the shop you visit every couple of levels. Since each level is random, it’s anyone’s guess where or how far into the level you will find these life-saving amenities. You can also collect one-off weapons from scrappers who have fallen in battle, but you can’t build or collect any more ammo for them. Once these extra weapons are empty, that’s it. 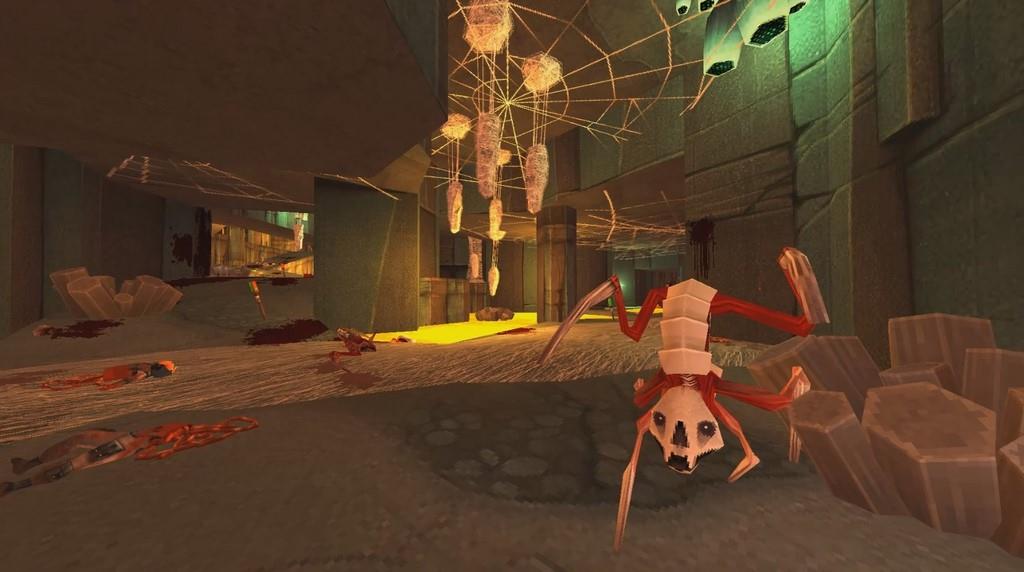 Using a weapon upgrade station to trick out your main gun is also risky, because you never know what you’ll get. For example I was cruising along, doing pretty well with my basic shotgun, but once I upgraded, it turned into a triple-grenade launcher, which is extremely dangerous to use in tight corridors. The only way to get back to your basic weapon mode is to find a bench and revert; you can’t swap between shotgun shells and grenades, for example. You can also nab stat buffs from crates that improve your health capacity, ammo stores and general damage, but it never seemed to help much. I would have gladly taken reliable old medkits and ammo dumps over these random upgrades; something, anything to help as my health dwindles and my ammo supplies ran short. Strafe’s fundamental gameplay philosophy seems to be “hey, you get what you get,” and while I understand this is a staple of the roguelike genre, as a FPS player it really got on my nerves.

Strafe imparts a kind of panicked desperation. I’ve been playing old-school shooters on ultra-nightmare or the equivalent difficulty since before I went to high school, but again there is a fundamental difference between how 90s FPS and roguelikes handle difficulty. Something like Quake or Rise of the Triad encourages you to map out each level, so you know exactly where to go for health or ammo, how to duck into that secret room for some quad damage, or double back and catch your breath if you’re getting beat up. Strafe’s randomly generated levels simply don’t allow for this. The whole game is dependent on twitch reflex skill, which can be fun for a while but after a time it gets exhausting. To add insult to injury, enemy behavior is unbalanced. Monsters will swarm you from all angles as soon as they’re aware of you, but the enemies are totally silent save for death grunts; this makes situational awareness a real chore. 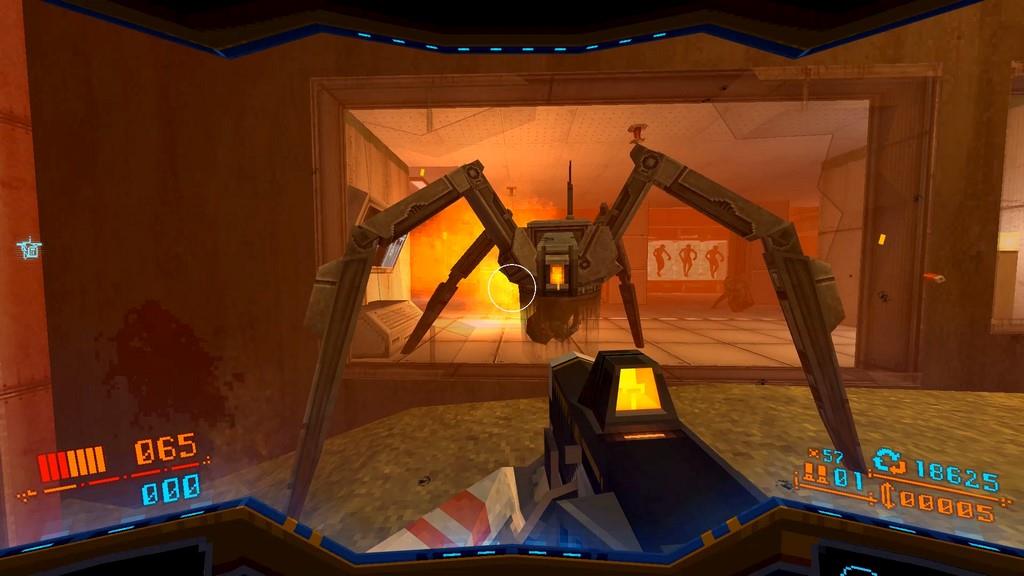 You can’t even stop a run midway. You have to play the whole campaign start to finish in one sitting, turning my $1200 gaming rig is an NES or some other such nonsense. Strafe is not a long game; you can finish a four-level run in a couple hours, but it gets so absurdly unfair early on that you’ll grind dozens of hours just getting good enough to finish a single run. I’ve been playing the game for two weeks and I never made it out of Strafe’s third level alive. A single episode of Quake or Duke Nukem can be comfortably cleared in a lazy afternoon, but I can quicksave; even most roguelikes these days, punishing as they are, at least allow you to place a one-time continue point so you can take a break to make a sandwich or do some housework. Not Strafe! It’s unfair, and you have to beat it in one go, like it or not. Pixel Titans apparently don’t remember id Software advising you to “save early and save often” in the Doom manual.

I really, really, really wanted to love Strafe. On the outside it’s everything I want from an FPS throwback. Its visuals capture 90s polygons perfectly, its FPS action is fast and tight, and its soundtrack is some of the best synthwave I’ve heard in years. Sadly, Strafe’s beauty is only skin deep. Under that veneer is a brutally unforgiving roguelike masquerading as a spiritual successor to Quake, a meatgrinder that will chew you up and spit out the pixelated remains. No doubt some players will thrive on this, but for an old codger like me, it just got old fast. Some gameplay balancing could go a long way to making Strafe a challenging but fun shooter: more health and ammo pickups, fairer prices at the workbench, and at the bare minimum a suspend point save. Strafe evokes my best childhood FPS memories, but ultimately it left me yearning for another nightmare run of last year’s Doom. At least that game played fair.

Strafe is a game where you need to know what you’re getting into before jumping in. It looks like Quake but it absolutely is not; it’s a roguelike FPS with a retro art style. It’s a harsh mistress, and masochistic players will love that, but Strafe personally left me frustrated and cold.