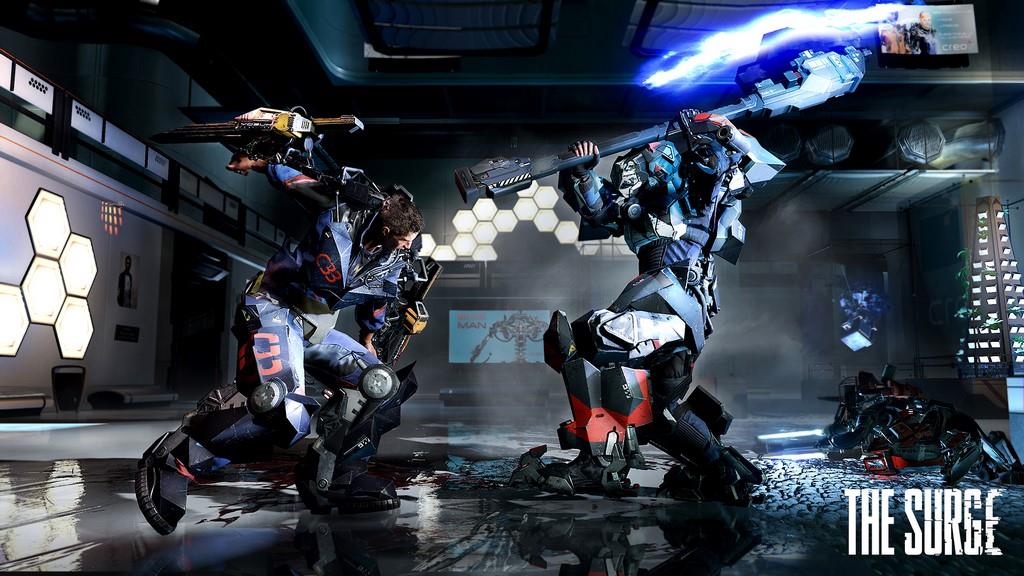 The Surge is a new action-RPG by Deck13 Interactive that involves the kind of gameplay elements popularized by the Souls games, something Deck13 explored in their 2014 game Lords of the Fallen. There’s weighted melee combat that values player skill over stat increases, open exploration with no minimap, prioritization of backtracking and memorization, very little music with the occasional ambient ditty. A lot of this game’s vibe and playstyle feels directly lifted from the Souls games. What largely separates it is where the game takes place – a destitute, post-apocalyptic near-future factory, where workers are fused with tech, and the tech has, of course, malfunctioned.

What results is a mostly good third-person action game that sacrifices itself on the altar of sameness in order to uphold its quality. Whenever The Surge gets you hooked on a tricky enemy in one location, it’s a joy to get their pattern down after hours of grinding – but when no location feels particularly curious, it can feel like you’re stuck in a cyberpunk limbo.

The Surge opens up with Warren, a wheelchair-bound man on a train to a facility run by CREO – a sort of Silicon-Valley-esque dystopian company controlled by techbro-dullards who wear Armani glasses and believe in “making the world a better place,” that has been instrumental in helping the world through devastating climate change. Warren’s wheelchair-bound days are soon over after he gets an exoskeleton brutally inserted into his flesh, giving him the ability to walk. The contrast between wheelchair-bound and exoskeleton-bound becomes clearer once many of those who have been similarly enhanced by the exosuit become mindless murder machines, killing workers across this CREO factory. Warren is one of the few who has not been corrupted, and is compelled to explore what happened and solve the problem. The game isn’t that interested in exploring the ideas behind this travesty in any interesting way outside of standard scifi dystopian story, but juxtaposing the cold, bloodied factory landscape while cloying tech-guru prattle emanates from the monitors does a fine enough job underscoring the central irony.

The Surge is gorgeous, and it actually, again, takes a lot of cues from the Souls games in this regard. The detail and mood of the environments are striking and consistent. The score is light to non-existent, and the silence is generally deafening in a good way. The humming and buzzing of a factory that is still somehow chugging along despite everything is not lost on the player. The consistency in graphical textures, and smart (although somewhat byzantine) level design keeps me hooked into grinding through tough enemies for hours at a time.

It is littered with details that suggest something went wrong, and the glossy near-future horror of the environments is really, really fresh. The winding pipes, lifts, detritus and scraps along with the dead workers who punctuate the landscape are interesting on their own, but they’re elevated by the games’ insistence on maintaining its beauty. What could just be a run-of-the-mill wasteland setting becomes way more interesting, although ultimately too same-y (more on that, later).

The enemies, although not particularly diverse, are scary, and disturbing, without being gory or overly upsetting. These were once men, now their minds are destroyed, and they want to kill you. They scream, sprint, lurk, and are a general delight. Some of the robotic enemies are tough and have really cool, varied attacks, but most of their design isn’t nearly as inspired as the exo-suit guys.

The combat in The Surge is also excellent. It takes the Souls formula and reapplies it to the sci-fi setting. The weight of the weapons, and the general physics of the mechanics, are spot-on, and the sound design when a hit connects is precise and mixed beautifully. Each hefty clank and whack of your attacks (horizontal and vertical attacks, a really neat way to change up the light/heavy attacks typical to these games) feels so good and doesn’t get old. There’s also a little drone buddy you can get who is helpful for strategizing and drawing attention of certain enemies. That’s neat.

However, coolest part about The Surge’s combat is also its least realized – targeting and dismemberment. You can attack an unarmored or armored part of an enemy for different goals. Attacking an unarmored part will more likely cause the enemy to recoil, and will do more damage, while attacking the armored part of an enemy will weaken that part so it can be removed and used to upgrade or build your weapons and armor. The idea of targeting different parts of an enemy with each of these goals is really cool, and it adds a layer to the combat I didn’t even know I needed. The problem with this style is that when you get to a certain point in a level, you’re just trying to get through it, and then all you want to do is bashed the unarmored portion of an enemies body, and it’s, for some reason, harder to select than it should be.

The game asks you to use the right analog stick to select the body part you want to attack, and the camera is mostly good enough that this isn’t a problem once you’ve locked on to an enemy. It gets more challenging when you’re fighting a group of enemies, and auto-lock becomes a hindrance (you can turn it off) but it also becomes a pain to select the correct body part. Suddenly I’m scrambling to pick an unarmored body part that will get this two bladed guy to recoil so that the guy with the hammer won’t get the jump on me while I’m dodging a follow up attack, but I keep selecting right arm when I meant to select body. This makes you feel cheated at times, but it’s also more or less a minor complaint for a cool system. 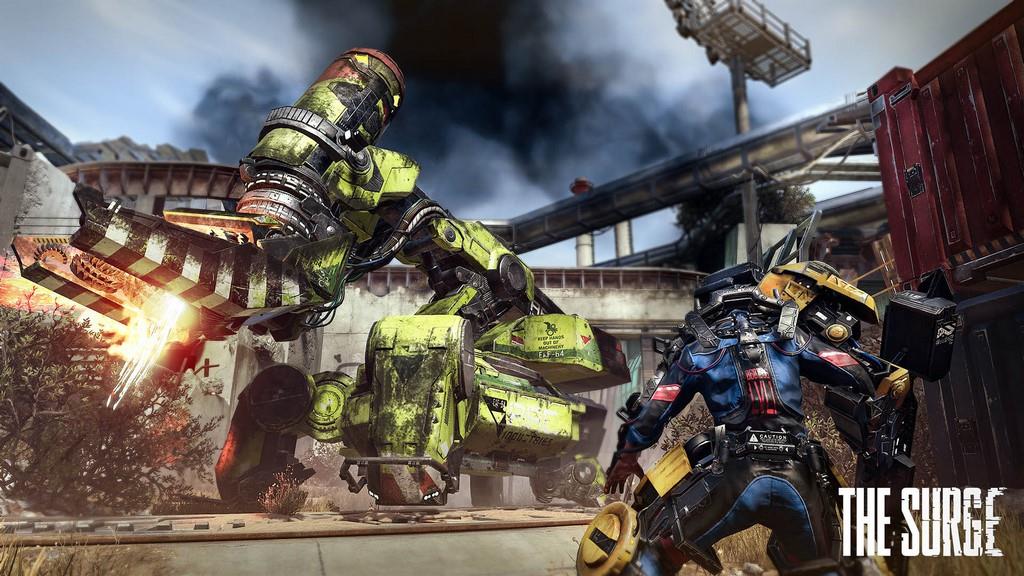 This sort of stems into the RPG elements of the game, which are the mostly bland. While upgrading your stuff is cool, and getting new armor and weapons is fun, there’s so little variation there that it’s just a race to get higher stats as a platonic ideal. And the game seemed more or less intent on doing that, which makes it go down a bit smoother, except when I want to do something other than brutally whack a cyborg to death. The Surge is tough, which means you brutally whack enemies to death a lot, with very little variation on the mode of combat. It’s not that you need to do things another way, it’s that there is so little opportunity to alter your approach that there’s only one way to get good at the game. The combat is so tight and well-paced, but when the game has only so much to offer, even that becomes dull. Some folks might not mind this kind of thing, but while I appreciate the simplicity of the design here, it’s not enough to grab me.

The energy and stamina systems help with the kind of subtle variety that improves other Souls-esque games, even if it’s not enough to totally sate me. With the energy bar, which fills up as you attack, I have to figure out whether I want to summon my little drone buddy to distract an enemy, or use some energy to give me a buff or regain some health. The limited stamina is familiar to anyone who plays a Souls game, but it’s still a really good way to control and elevate combat, and it works really well here too. The Surge also employs a way to duck or hop over attacks that I found cool and mechanically sound but largely unnecessary and too difficult to invest time into learning. Everything about the combat feels so good, and stressing that is important.

The combat, however, does not exist in a vacuum. The Surge has a sameness about it that is difficult to ignore. Where the game feels realized and beautiful in its design, it environments also feel repetitive and endless. This is somewhat by design though, right? You’re in the warped, logical end to the Jeff Bezos era – everything would be the same. But then without a story or characters I find interesting, the beautiful, philosophically sound sameness seems shallow, only stimulating on that intellectual level where I’m reaching so hard to engage. City 17 works as a setting for Half-Life 2 because of everything around it, not just in and of itself (The Surge’s CREO setting is also not as elegantly designed either).

There’s only so many times you can drill the irony into my head of the broken factory and the young tech dude on the monitor yapping about CREO’s decency before I’m asking for something else. I am mostly excited to explore a new area because of its newness, not because of what it will bring, how it will grip me, or what enemy I may find. It suffers from a terrific imagination that has been deliberately curtailed to make everything excel, but cripples my desire to dig into this super vibrant world. 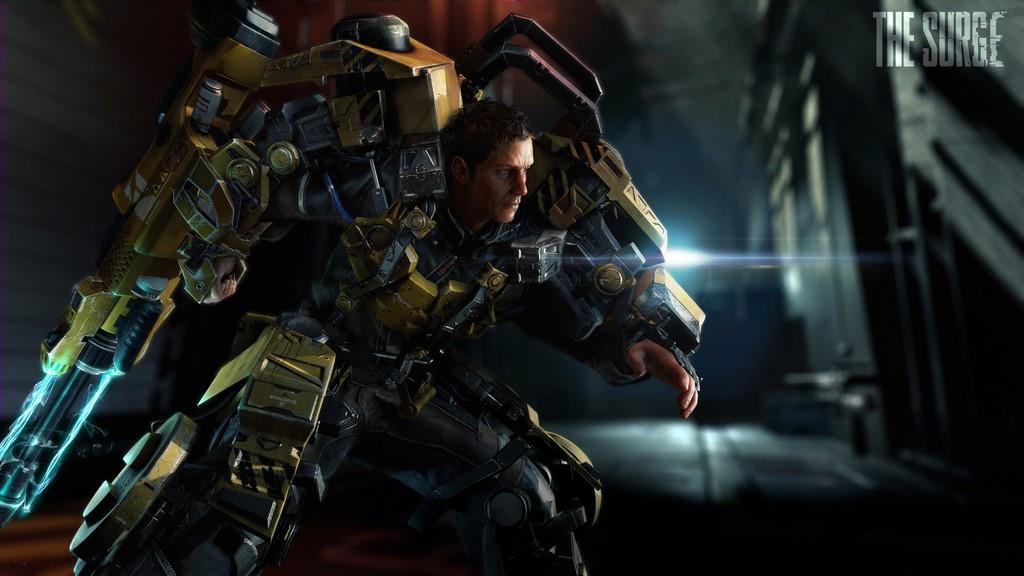 I’ve barely mentioned the plot or the characters because I didn’t care about them, and barely knew who they were. The Surge waffles between a perfectly vague story and one that is too exact. None of the player’s actions are particularly motivated by anything plot-wise, defining plot progression as combat and exploration, with few side characters that are all well-acted but pretty shallowly written. This would be fine if the world was as diverse in what it was trying to communicate as it was beautiful, if it was as varied in its detail as it was consummately so.

The few people who populate the game and haven’t been killed or turned into cyborg monsters are realistically written, but fail to interest me, and feel pointless – but not as pointless as our lead Warren.

Why the developers couldn’t have made the main character some sort of surrogate for the player instead of giving them a name and a dull personality I will never know. Games can be about "boring people," or "normal people," but the game would have to be interested in that for it to work. I just don’t need another boring dude in the lead, and it takes away from the experience that this Warren person is in the way of my immersion – because he might as well not be there.