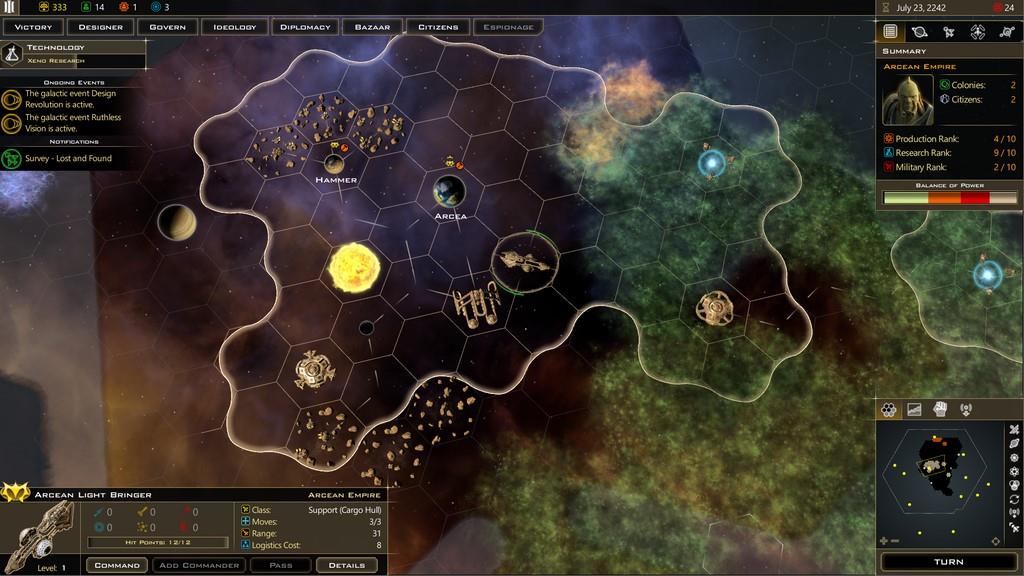 Written by Tom Bitterman on 5/23/2017 for PC
More On: Galactic Civilizations III

“Galactic Civilizations III: Crusade” (GC3C) is a major expansion for “Galactic Civilizations III” (GalCiv3).  And by major is meant “much bigger than one would expect from a normal expansion”.  This edition contains much more than the usual “a couple new races, some new techs, and new challenge maps”.  There have been some serious changes to core game mechanics included.  We will start with the smaller changes, and work up to the big stuff.

There are some new races.  The Terran Resistance is a proud warrior race, courageous and militant.  The Onyx Hive is a trader race descended from worms living near geothermal vents.  The Slyne are giant amoebas that depend on cybernetic enhancements to be the toughest kids on the block.  All in all, the default bunch of races will provide a variety of different opponents for single-player fans.

The economic engine has seen some changes, also.  Planets now often have special goods, which can have different values to different races.  This can lead to interesting trade possibilities, which the AI does a decent job of discovering and using.  The entire engine is friendly and reasonably transparent, and it is easier than before to build a trading empire.

On the other hand, sometimes it is just easier to take what you want.  The invasion mechanics have been overhauled, making it more difficult to plan out an invasion.  It is no longer enough to just draft a mass of your population and put the on attack boats – you have to train legions for that specific purpose.  This tends to reduce the advantage high-growth races had in ground-based combat, at the expense of requiring longer-term invasion planning.  There is a strange new tile-by-tile war map where the ground troops swarm around destroying things and fighting each other.  There was not much in the way of tactics after the battle started that I could see.  Perhaps there will be some refinement of this mechanic in the next installment.

Every race now grows “Citizens”.  A Citizen is similar to the “Great Person” found in some strategy games, in that they provide some sort of bonus to your empire.  When a Citizen is “born” (which happens on a regular basis) it does not have any particular specialty, so the player can partially shape their empire by deciding how to train each one.  A Scientist, for example, will provide a boost to research, while an Admiral can lead fleets of spaceships.  There are many different types of Citizens, so the opportunities for customization are vast.  The old production wheel is gone, and Citizens take its place.

A particularly interesting sort of Citizen is the Spy.  Spies can be assigned to espionage operations against other races.  Factories can be sabotaged, technologies stolen, and other underhanded skulduggery engaged in. 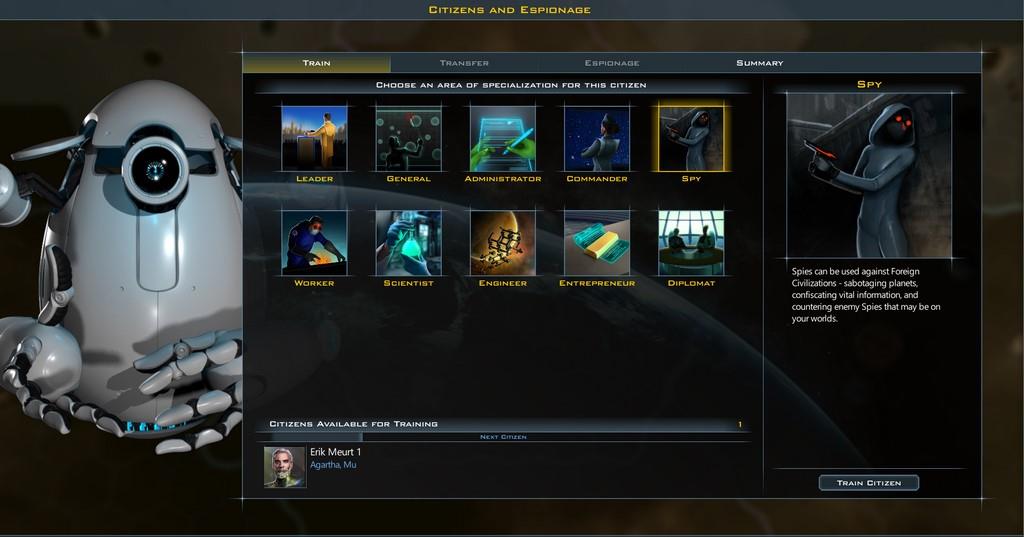 Starbases have finally been simplified.  No more flying constructors out to them in order to build new modules, no more having to build constructors that will then auto-fly out.  Starbases now build whatever modules you tell them to, using whatever funds are available.  Now if only there were an auto-update feature so one did not have to go around to every starbase when a tech unlocks a new module upgrade.

Crusade continues the trend of encouraging customization and sharing.  The ships that come with each race are pretty neat, but there is a ship designer that can create pretty much anything the aspiring rocket scientist would want.  The ship designer is basically its own little computer-aided drafting system, and the ships that players have created are amazing.  Better than amazing, as they can be downloaded and integrated into your game.  Expect a great number of themed sides (and trademark violations) to be produced. 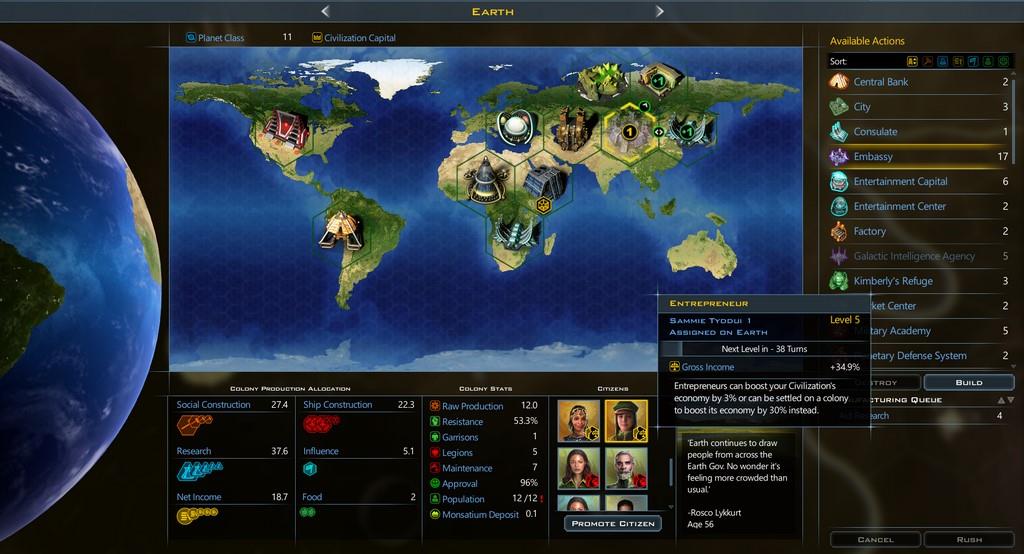 While this is not entirely new, it now has an improved civilization editor to go along with it.  Now one can build a new race from the ground up.  A new race has a certain (small) number of points they can spend on advantages (for example, being likable or growing a lot of food).  Each advantage costs a certain number of points.  If your civilization wants more points, it can take a disadvantage (for example, being lazy or stupid).  There are 23 advantages/disadvantages, so there is a lot of room to try new things.  In addition, each civilization gets two Abilities – for example, being time travelers or sneaky.  Combine great flexibility in race design with all the options in ship design and a serious modder could come up with something really impressive.  I expect a Napoleonic mod by next year.

I am certain that this review has touched on only the highlights of the new features in GC3C, and missed some entirely.  This is definitely a game that one can spend a lot of time with and still not see all of it.

In summary, if you like GalCiv3, you should get this expansion.  If you kinda liked GalCiv3, this expansion is a good excuse to take another look – the game is definitely deeper and more interesting with it.

An example of what a good expansion can be.  Adds depth and breadth to the original.  Worth the 20 bucks, and more.