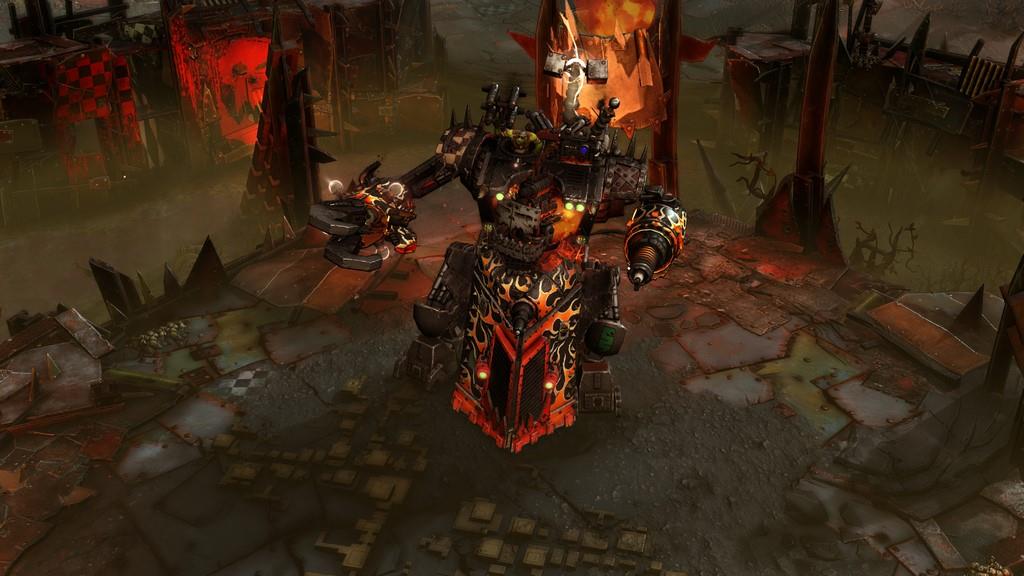 Dawn of War III is a conglomerate of brutal violence and crushing micromanagement. Although the game boasts a host of deadly space marines, dissident Orks scavengers and elitist Eldar enforcers the campaign and multiplayer battles lack rhythm. It certainly feels like a Relic game though, using scattered resource points to control the map and clever level design allowing players more mobility. Dawn of War III does a great job at delivering the crushing Warhammer 40K vibe as death and ruin populate a universe tethering on the edge of collapse. It is a good real time strategy game and it does Relic credit, but it’s not the champion the genre needs right now.

The pace of Dawn of War III is one of patient scouting, impatient manoeuvring and chaotic battle. Capturing resource nodes is a must but inevitably opens into skirmishes which turn into battles. The mix of units make the battle line nigh impossible to read, which doesn’t really matter considering the amount of time micromanaging the units takes up. The narrative is pretty solid but is dumped on the player in the briefings between missions, but the cinematic art style is delicious. It’s difficult to become immersed in the missions and battles, as the dialogue during briefings and incessant rantings of the heroes during battles begin to grate three or four missions in, especially the Orks. I enjoyed the way missions were staggered between factions but the novelty ended quickly as I craved the previous faction whose units I had just become accustomed to. The factions play so differently it takes a few skirmishes to become accustomed to the factions units again.

Saying that I still wish one of the factions was designed to or could facilitate steam rolling strategies. With no need to research or peruse the golden goose of a technology tree the base building element is unconvincing. Research and tech upgrade units and their abilities which is fun, but trying to control a unit's abilities during pitched battle is ambitious. The battle line is drawn up of units flinching from numerous stun and knockback effects and when melee units engage its more about overpowering the opponent rather than clever tactics and sound strategy. I would appreciate the units and their epic individual abilities’ a lot more if I could see the results they produce. Not only is the narrative underwhelming, the micromanagement and lack of pathways to invest yourself in the battle does collateral damage to the overall experience. 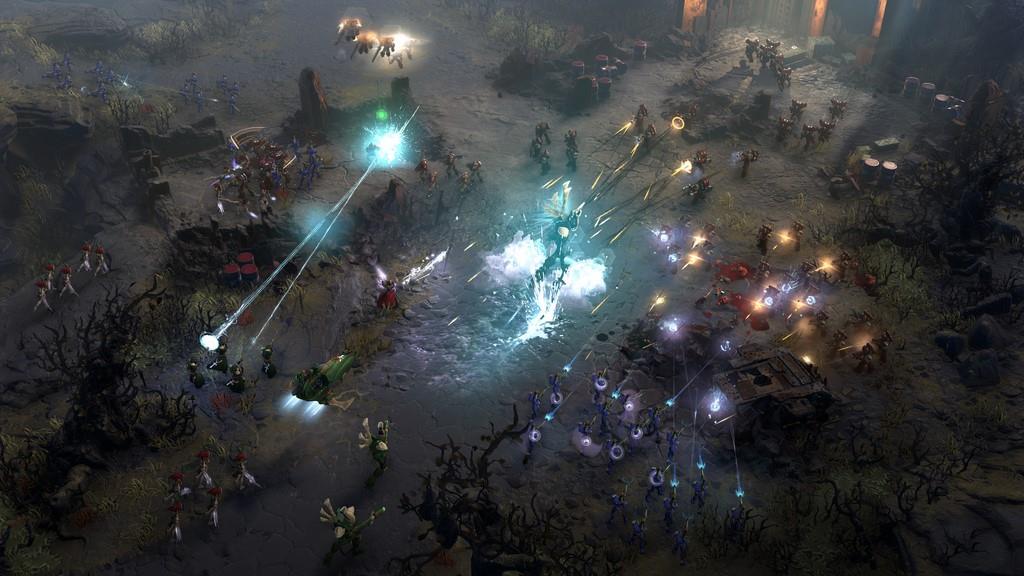 The unit roster and their respective abilities do a good job at balancing the gameplay. It’s not the most practical or glorious methodology, but screening your favorite troops with cannon fodder so you can micromanage their abilities can prove useful when fighting for high or advantageous terrain, or even in general. However, the price of providing cannon fodder for your elite units is costly. Especially considering the cost of recruiting units and resources spent on controlling the capture resource points. Units can be decimated during a skirmish if not carefully position and supported and due to the resource tick rate it can take a while to get reinforcements to the front. Instead, there are resource and health pots scattered across the map enabling players to heal units without disengaging them from the fight altogether.

Amongst the multitude of specialized units to choose from each faction can field three heroes to tilt the battle.  Each faction has its typical melee, support and demi-hero characters. While Gabriel is mainly there to consistently dish out the damage, Gorgutz ‘Ead’unter plays a mix of support and high damage. The character animation for both heroes, elites and general units are really well done. The Orks ramble swiftly, the Space Marines advance and the Eldar glide around the map. Although my favourite hero was Gabriel, the most fun faction in the game has to be da Orks. Nut ‘nly ‘re da boyz ‘ard as stuntie helmetz, dey dus uh’ great job of makin’ ya feel like one o’ da boyz! I’m not sure if it’s the menacing waddle animation or the cheeky taunts but I found the Orks to be the most likeable. You really feel like a member of the war party, one of the boys. Neither the Space Marines nor The Eldar had that going for them. I really like how the superweapons can be countered. The Orks can deploy a nuclear device, which needs to be carried into battle and deployed by a unit. Said unit, can be eliminated by the enemy whom can pick up the nuke and use it against you. The Space Marines can call an orbital laser which they can control on the map. Said uplink node can be captured by the enemy whom can use the pretty laser to shave your whiskers. The idea of such an audacious move is most tantalizing, as committing to such an endeavor could cost the lives of the majority of your fighting units. This mechanic, coupled with the Escalation Phase online makes for some interesting decisions for any armchair general. 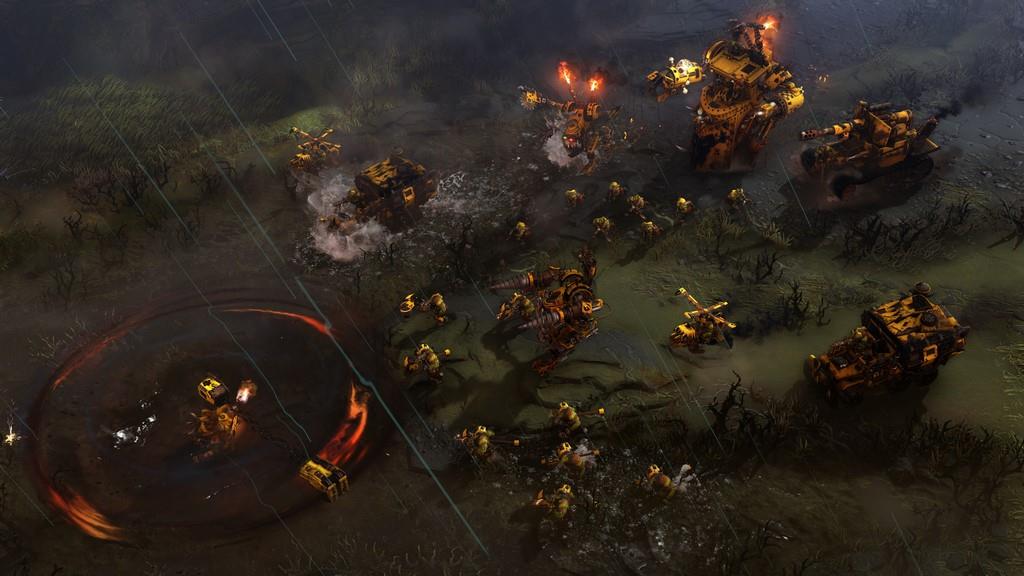 The multiplayer is chaotic and brutal much more so than the campaign. Like the campaign though, the large pitched multiplayer battles are difficult to read or control. More often than not it feels like a mass charge rather than engaging. Not only is the micromanagement aspect even more important, the Escalation Phase mechanic is introduced online. Each step of the Escalation Phase will increase your income and structure health every 10 minutes or so force players to play conservative in the early game and leading to massive pitched battles in the late game. I was severely punished in my multiplayer games as more patient players whittled my ranks down while taking little losses and hoarding resources for the late game.

The MOBA genre has two major influences in Dawn of War III. First, the way heroes are summoned, healed and used to tilt the balance of the battle. Second, during multiplayer battles players are tasked with taking down a shield generator, a turret and then the enemy’s base. It’s far from the reasonable rhythm we can expect from MOBA’s due to small map sizes and 3v3 battles. Much like the campaign though, the large pitched multiplayer battles are difficult to read or control. The most important decision when battling online is when to summon in your elite characters. The customisable elites can deliver some intense carnage if deployed in the right environment. The level of customization is fantastic and probably one of the most time consuming and rewarding aspect of the game. Mix this with the polite nod to its tabletop origins via the army painter and the use of elite doctrines players can develop specialized armies to suit their play styles. Fielding your own custom army of genetically modified super soldiers in tandem with your selection of army doctrines can be very rewarding, especially when they’re looking fly after a visit to the army painter.

Dawn of War III is a great platform with which players can delve into the Warhammer 40K universe. Even though typical and heroic unit types from the universe make an appearance it's difficult to care or become attached to a unit. It's a great addition to the genre, but the staggered rhythm and extreme micromanagement responsibilities do enough to consistently break immersion The multiplayer holds its own, as players forge 3v3 alliances to spill the blood of their enemies. The number of different units and the means with which players can customize their armies with doctrines and elites lends great variety to campaigns and online battles, but the game trips and falls when trying to deliver its narrative.