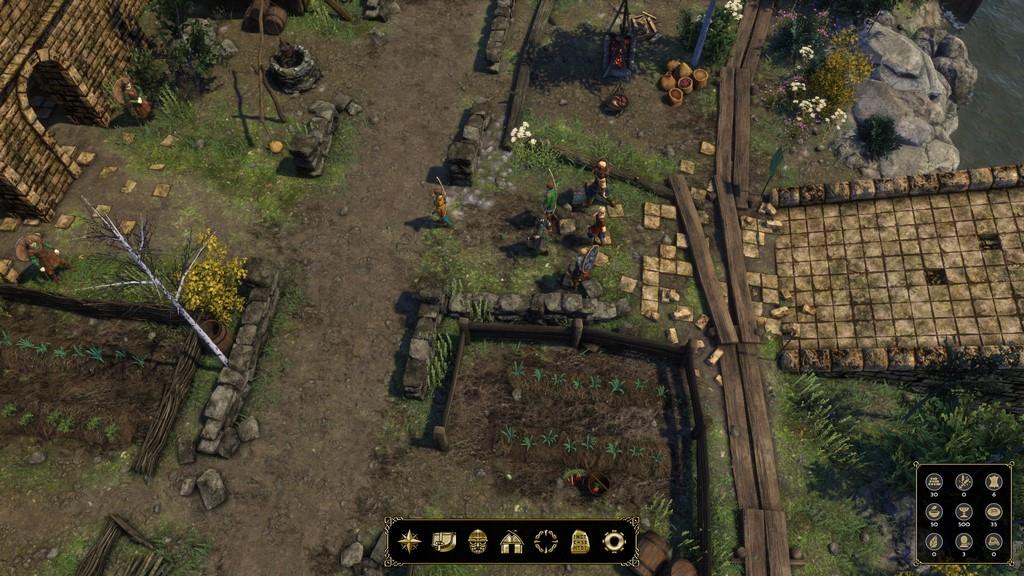 Expedition: Vikings creates an authentic Norse atmosphere populated with rich historical influences and a genuine Viking experience. Set circa 790 A.D. the game opens with the player becoming the leader of a small Norse tribe. From the word go the game throws the player into the deep end of Norse society. Although you lead a small tribe your decisions impact all around you for better and for worse. The game is really quiet pleasant to play and the combat can be very satisfying. The customization of your tribe, called a Hird, is extensive, even down to determining who has the cook or take first guard when camp is set for the night.

Lets get straight to the point here, you’re a Viking so you’re going to want to fight, raid and kill stuff. As the leader of the Hird though, you can’t give into the beserker rage every fight. The combat in Expeditions: Vikings is rewarding and brutal at the same time. The battlefield consists of a hex grid littered with environmental obstacles and barriers through which you lead your Hird into battle. Patience and a clever strategy or two will win most fights though so once you develop strategies which suit your Hird build you’ll rarely struggle. Different weapons and warrior styles keep the Hird varied and balanced. A phalanx or skirmishing archers won’t win much. Abilities like hooking away enemy shields to expose them to attack, the deadly range of spear wielders or forcing infantry into a cluster so your archers can reign death from above leave little space for beserkers on the battlefield. Combat is also about numbers, stats, ailments and buffs to combo and deploy depending on your HIrd build.

After a few battles you begin to develop a bond with your Huscarls and fellow raiders. So after the bloodlust, when the red mist clears from your vision, you may well feel inclined to bestow some of that loot unto the loyal fighters of your Hird. Micromanaging your warriors is key to survival in Expeditions: Vikings. Decking warriors out in various armor sets and builds influenced by their role in your Hird can feel rewarding. I really like that the player always has the option to go for the non-lethal finisher during combat. Clicking the small glowing skull icon on the right of the ability bar can negate any critical damage you do during the fight, but ensures the character lives after the battle with only minor injuries. 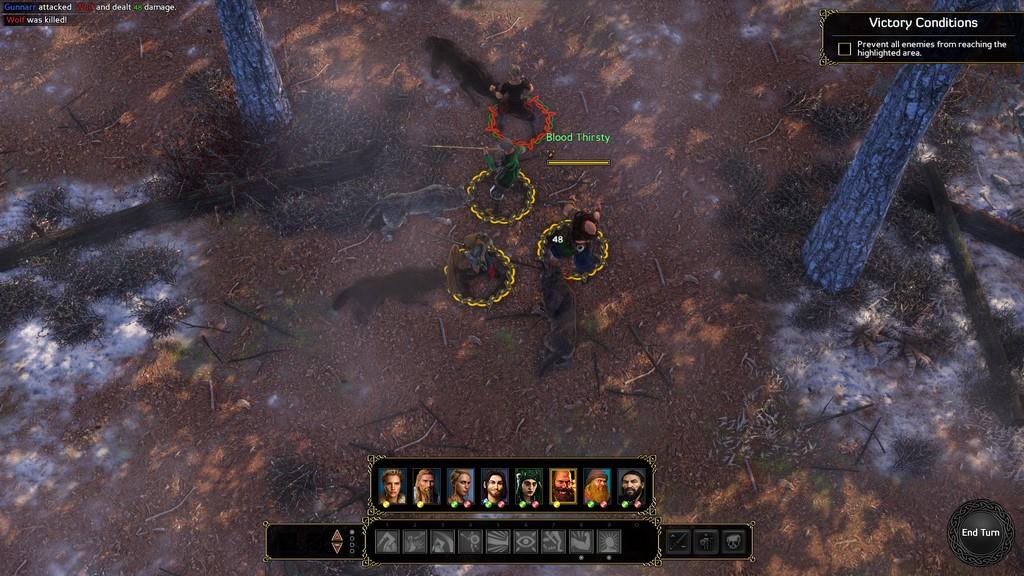 Another nugget of gold is the chance of dismembering your enemies, depending on how incapacitated and if you used a sword or an axe. It screams ancient Viking. So does the shieldwall, a classic Viking tactic deployed in battle. Couple the sheildwall with healers and you can pretty much march across the hex grid battlefield unopposed. Especially late game when your warriors have become specialized killers, who ironically couldn’t bate an egg. A hird full of only warriors will starve rather than thrive. Moving forward its important to have a balanced hird with warriors, defenders, healers and camps people whom can cook, set up camp and keep your warriors in the field.

When you’re not busy raiding and pillaging, there’s a rich world to explore. I thoroughly enjoyed trading the mine field that was Norse society. Living from hardsave to hardsave, I blundered my way through scores of missed dialogue opportunities and NPC’s hell bent on dying. While society in the game pays great homage to the Norse customs, for those of us unaccustomed to it it can become frustrating. Morale is important for you hird, and your actions and dialogue choices can affect how Hird members feel about you and question your right to lead as Thane. Fail to observe Norse customs and you’re guaranteed to make enemies without raising an axe or stealing one or two lousy live stock.

At first I was charmed by the random challenges, duels and pointless bloodshed. Until I was deep into a quest line, so close I could smell the loot, only to be forced into killing an NPC I had spent time and resources becoming amiable with. It also doesn’t help that NPC’s will often have a reactions clearly meant for another dialogue choice which can lead to frustrating encounters with NPC’s you need to deal with. Recruitable characters can be found throughout Denmark and some in Britain. Most will not join your hird by default and will require certain dialogue choices or quest lines in order to gain their loyalty. I thoroughly enjoyed recruiting hirdmembers and allies to my cause. At times I felt like I was Littlefinger playing with puppets tied to strings they might never see. Choices which can influence potential allies and both present and future hirdmembers include historically typical paths, such as abstaining or partaking in slavery, to raid foreign lands or send diplomatic envoys and whether to pray to the old Norse gods or to dismiss them as myths. The game does a fantastic job at creating that foreboding threatening feeling that one could expect from such a brutal and wild world. In these decisions lie the real tests of loyalty and your willingness to obey traditions. Tread to far from the old ways and some of your best hirdmembers will withdraw their allegiance. 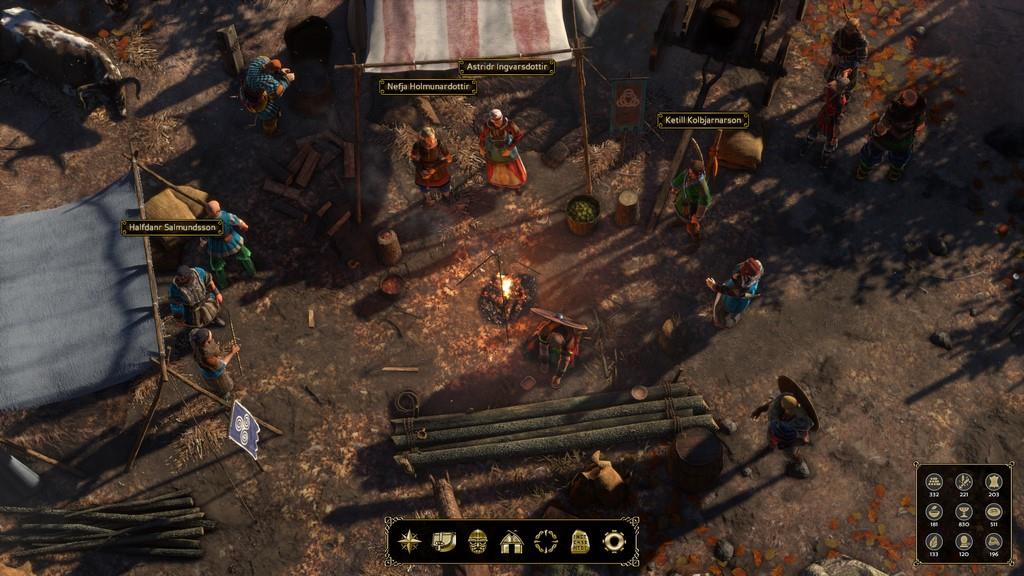 Much like a Viking of old, Expeditions: Vikings is not a pretty game. The graphics belong to an early PS3 game and the lack of portraits and thumbnails really let the game down. I’m sure the developers plan to remedy the lack of portraits, but for now the lack of varied faces means your Hird are more like inbred Viking zombies. You know from their stats and titles that they vary wildly in their builds, but they all look and sound the same. The game is also rude like a Viking. Entering areas from certain directions can be very disorientating when the camera angle fails to react to the players passage. Another small thorn in my experience was the complete lack of notice given to the Thane when equipping items hirdmembers cannot use.

My biggest issue with the game is the HUD. Its like the rear end of a Viking after a successful night toasting with his ancestors in Valhalla. It stinks. It takes up so much room, it’s not aesthetically pleasing and is mildly impractical. Considering this is where you spend a lot of your time micromanaging the Hird, I would have expected it to be comfortable and not cold like a dentists reception room. The cold HUD and generic portraits make it difficult to associate with characters and dilutes the value of such a deep Hird customization path. Because of this the grind is very bland, like boiled chicken. The quests and narratives are well worth doing and quiet rewarding, but the lack of variety to the aesthetic of the NPC's and even certain environment backdrops take away from the generally charming gameplay.

With that being said, I will definitely return for another campaign in Expeditions: Vikings. The combat, historical and social ques are rich and certain moments culminate into those golden moments of triumph. These moments are marred by the old school graphics, clunky game play and impractical HUD. I could only really recommend it for strategy or history buffs who can ration the historical and social value to get through the grind. With a few tweaks and some fresh new faces I could see it as an approachable game for the average gamer though.

Expeditions: Vikings is a fantastic role playing strategy game for those of us whom feel the need to raid and pillage. It creates an authentic social environment where traditions and customs and be enforced or forsaken, much like the gods and myths in the Norse universe. Its a bit clunky, and not very pretty, but neither were the Vikings. With a few more character portraits, and some spit and polish it could be a real gem for any gaming collection.