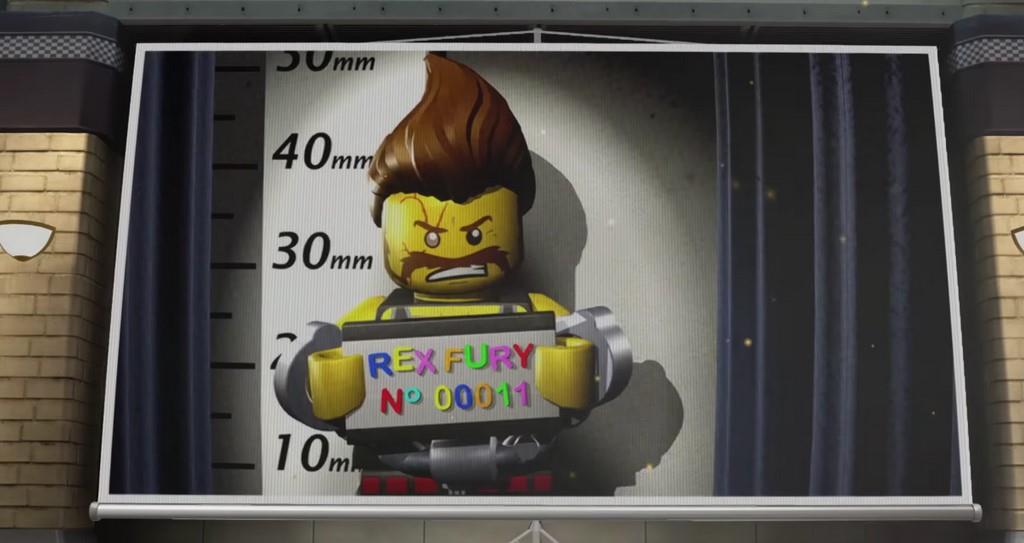 LEGO City Undercover launched to warm applause on the Wii U back in 2014. One of our resident Nintendo gurus, Sean Colleli, wrote a 2,500-word review and gave it a 9 out of 10. That’s no small thing. LEGO City Undercover is fun and funny, it riffs on cops 'n robbers stereotypes, and it keeps you running, jumping, and driving around its bricky open world like a lighthearted Grand Theft Auto. The only thing missing in 2014's version was co-op gameplay—but that was, as it turned out, a pretty big omission. Co-op has been a staple of LEGO games since the late 1990s. In other words, the (quite possibly) best unlicensed LEGO game in LEGO’s history was suddenly a single-player experience. Reviewers kept applauding but were a little bummed about that part.

Fast forward four years to the present. It’s now 2017 and LEGO City Undercover not only has co-op, it’s on Nintendo Switch, and has reached beyond Nintendo exclusivity onto PC, PlayStation 4, and Xbox One. It’s not like the LEGO formula has advanced or receded much in four years, so all the neat things about LEGO City Undercover in 2014 are still intact today.

I’d like to introduce you to Chase McCain. He’s a semi-legend of the LEGO Police, who’s quick to cheese for a fan and good-naturedly soak in bit of his own self-worth. He’s being called back in for an important undercover mission. A dangerous criminal has escaped prison, a criminal that Chase McCain had put behind bars years ago, and only Chase can stop this guy's crime wave. That guy is Rex Fury.

Rex Fury looks like he came out of a LEGO Harley Davidson box set. He’s shirtless, scarred, red-headed, and tattooed. He’s got a handlebar mustache, a chip on his shoulder, and several of the City’s most wanted bad guys doing his bidding. So, Rex Fury is at large, Chase McCain is on the case, and you’ve got an unlockable open world to play in. 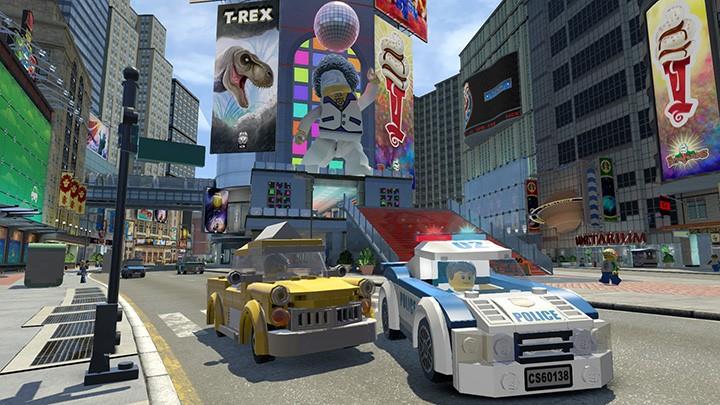 LEGO City Undercover takes advantage of all of LEGO’s unlicensed properties. That is, everything LEGO makes original for itself; all the stuff not branded Harry Potter, or Lord of the Rings, or Star Wars, etc. While LEGO City includes a few things like food trucks and RVs and dune buggies and limousines, it’s more about city services and emergency vehicles. There are police cruisers, fire trucks, ranger stations, and Coast Guard cutters. It’s all the stuff that, frankly, I was never interested in building as a kid, although, as an adult (and I use that term loosely), I find that the LEGO City sets possess an admirable workmanlike attitude.

LEGO City Undercover begins with a car full of clowns pulling off a bank heist—as classic as it is cornball—and Chase McCain having a reunion of sorts with the rest of the police force. The platforming is pretty high octane in the opening act. There are vehicle chases and foot chases, swinging between high rises and climbing rock walls, and, of course, there’s plenty of slapping cuffs on the bad guys.

One inescapable gameplay conceit of the LEGO universe is that you’ve got a lot of little round coins to collect. Like, on a scale of one to Super Mario Bros., there’s a lot. You don’t have to collect them all, but hitting a certain threshold in a mission labels you a “LEGO City Hero,” which is nice. Good to know you're efforts are being acknowledged. Earning that designation on each level also reminds a collectathon hoarder like me to chill and maybe go play the rest of the game now. It's not just a coin collection. 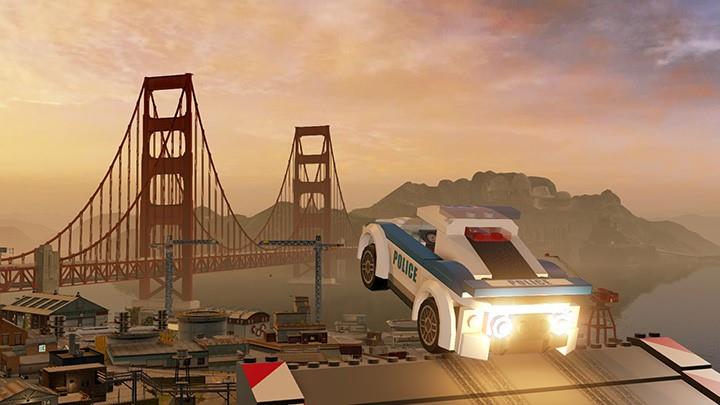 One other inescapable gameplay conceit of the LEGO universe is that you’ve got a lot of little LEGO bricks to collect, too. Although the entire world isn’t made of bricks. The roads are paved, most of the vegetation is natural, and most of the architecture is made of normal textures rather than LEGO. Having said that, there’s a lot of stuff you can punch to pieces, exploding apart little blocks all around, and running in circles to collect them. Those blocks build up into hundreds of thousands, and you’ll eventually take a chunk out of your inventory of them to build superstructures: like a ferry to run you across Auburn Bay over to Albatross Island—those are LEGO City’s versions of San Francisco Bay and Alcatraz Island. You'll see lots of familiar landmarks.

Compared to the fictional locations of Harry Potter’s Hogwarts School, or the Tower of Orthanc in The Lord of the Rings, or an Ewok Village in Star Wars, LEGO City Undercover is rooted in reality. Well, “reality.” We’re still talking about a LEGO-fied version of a GTA-fied version of things, but it’s still great to look across a dusky bay and see the Golden Gate Bridge spanning one stretch of water, or the Statue of Liberty standing tall on Lady Liberty Island, with a run through California’s Redwoods going around the far side of the bay, and Manhattan office buildings reaching for the sky.

As each of 20 districts gradually unlocks, you’ll take Chase McCain on further and further drives. The vehicle handling is, I think, intentionally terrible, where turning the wheel is an all-or-nothing affair. But it doesn’t matter because you can commandeer any vehicle “for police business” at any time, and no LEGO minifigure is going to argue. One vehicle blows up, and another one is headed your way down the road. Yoink. This is the police. 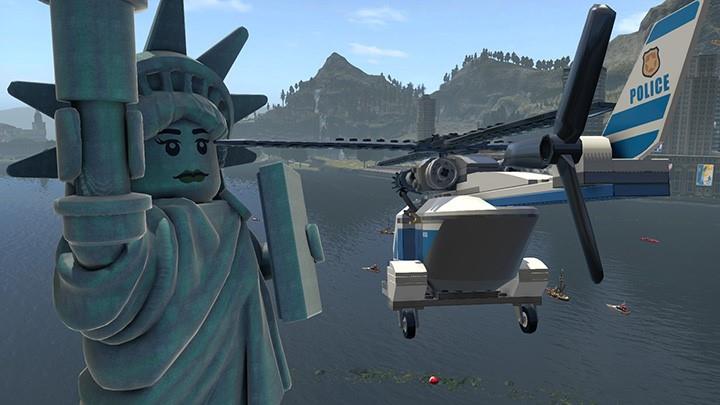 Chase McCain, being an undercover cop, collects eight different disguises, each with unique, swappable abilities. His regular cop duds equip him with a grappling hook and handcuffs, while, for instance, a miner’s outfit hooks him up with a big old pickaxe, and a burglar outfit gets him a crowbar and a stethoscope to pry open crates and finesse-open locked safes. As you can see, some of his disguises are questionable, but you’ve got to do what you’ve got to do when you’re going deep undercover.

The co-op is actually just OK. Rather than the dynamic split screen used in the Star Wars or Harry Potter-branded LEGO games (where the screen split also helps indicate where the two separated characters are in relation to one another), the LEGO City Undercover split screen is a hard vertical line down the center of your screen. Each side is equipped with a mini map that tells you where the other is located, sure, but it’s sometimes more work than it should be to find one another. This is understandable, since you're in a 360-degree open-world environment now; it's not like other LEGO games which tend to maintain fuller control of the camera and size of the playground.

When one player reaches a story beat, then a cutscene takes over and teleports the straggling player to that location, if necessary. Since Chase McCain can take on many different looks, the cutscenes default to a particular outfit the developers had in mind for that particular cutscene. Chase McCain can be disguised in-game as a female officer, but if the cutscene calls for Chase in a pair of jeans and a hoodie, then that’s what he’ll be wearing for that moment. No big deal. Would’ve been a braver choice to let the disguise appear in the cutscenes, though. 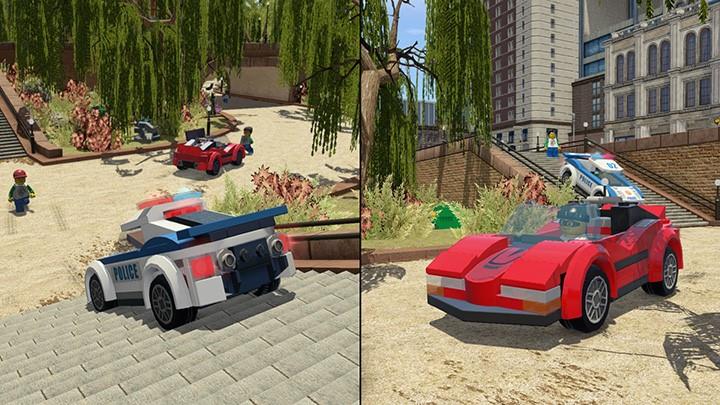 I’m also weary of fighting the camera in enclosed locations. The open world teaches you to spin the camera in 360 degrees, but that freedom is often removed during platforming-heavy scenes or when you’re standing too close to a wall or whatever. Just have to learn to go with it sometimes.

But my seven-year-old and I are having a good time with LEGO City Undercover. I personally like it much more than the licensed stuff. And the open world is way more fun than the sometimes completely arbitrary stage crafting of other LEGO games. Yes, Undercover also uses smaller sets for certain missions. But the world overall is wide open and feels great compared to the other LEGO games I’ve reviewed.

LEGO City Undercover is a slap-happy LEGO GTA. This 2017 remaster of the 2014 Wii U exclusive now introduces the originally absent co-op play, while also jumping onto the Switch, PlayStation 4, Xbox One, and PC. Easily my favorite LEGO game in years.