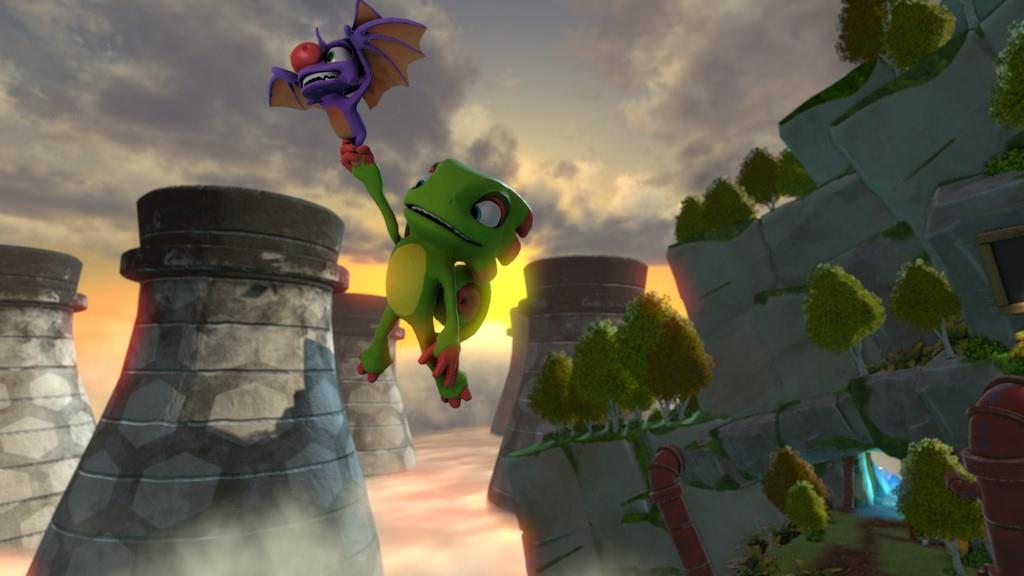 Playtonic’s Yooka-Laylee has a clear goal: try to take the player back to Rare’s heyday. And while it tries, and has some success, it fails at a lot of the things that make games enjoyable in the first place.

Yooka-Laylee is gorgeous. It is a delight to behold. Its textures aren’t perfect, but it pops and shines and giggles and glows in all the right ways. Collectibles that bounce up and down and talk gibberish, snakes that wear pants and answer cellphones, snowy mountains with slippery ice, and space speckled with stars: this game is gorgeous in the exact ways it needs to be. And the immersion doesn’t stop at its look: The score is similarly evocative, and also quite good, even if it occasionally slips into self-parody. The dynamism of the score really sucks you in, switching depending on the location, activity, situation, characters involved. The small melodies that snake in and out of a level as you take on challenges and collect pages are seamlessly interwoven with the world. Yooka-Laylee is startlingly good at getting me to love this world, its characters, writing, and conceits. I tend to roll my eyes at fourth-wall-breaking humor, but this game passes the Just Clever Enough test. When it’s not clever enough, it commits. I could spill oodles of ink on how much these character designs rule, how Yooka and Laylee are fun protagonists, even if they perhaps too closely resemble Banjo and Kazooie. Where the game missteps, however, is in some fundamentals of game development, which stinks, but its also not entirely a failure. 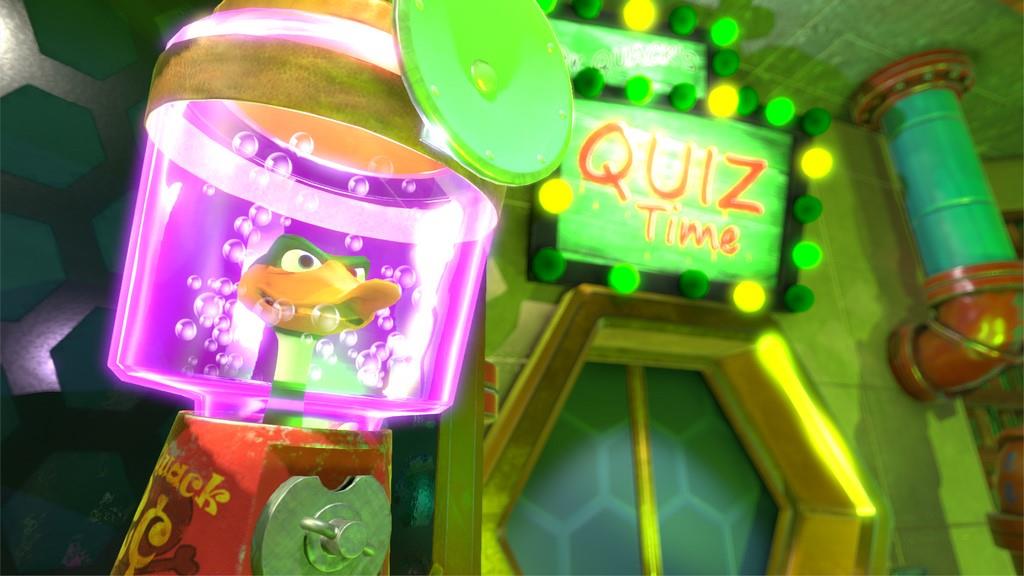 Yooka-Laylee as a game, not just a world and aesthetic journey, ranges from fun, to unremarkable, to frustrating. The fun and general intuitiveness of moving through the game space becomes strengthened or crippled as the game adds more things to it. This inconsistency makes the fun-stuff pockets of time calm down after a particularly frustrating section. For example, some of Yooka’s abilities are great, like the flying ability. It’s no accident that this ability succeeds because it opens up the beautiful world you inhabit. It’s also no accident that it succeeds because much of the often sloppy platforming mechanics become optional. But it also adds a sense of wonder that you’d imagine coming from a next-next-next-gen Banjo-Kazooie. The ability to fly through spaces that are all miraculously rendered and intractable is so, so cool. Other abilities are less successful, like anything involving shooting any projectile from Yooka’s mouth. I can’t tell if the designers thought it was a good idea or just cute to make the shooting function almost as bad as Donkey Kong 64’s, but they did it. The idea that I’d have to click to zoom into a projectile mode and then be unable to move afterward is bonkers to me. It’s frustrating for some of the puzzles and awkward to use in combat. It’s mimicking a design used for systems that did not have two analog sticks, and for no reason than it wants the triggers reserved for silly mechanics that are semi-successful. And even if it didn’t, the game’s lack of in-game solutions outside of mechanical input is such a bummer. It’s decisions like this that keep holding Yooka-Laylee back.

Most of the abilities Yooka gains are played with to a limited degree, and then just explored independently of one another rather than having a synthesis. The ones it does synthesize get a reserved chuckle then become another ho-hum part of the game. Some basic enemies, which are already, on the whole, unfun to fight, are remarkably frustrating. For example, a bee enemy keeps killing you, but you narrowly beat it through what seems like random chance. Eventually, after dying enough times, you figure out that you’ve only been able to do damage when its spikes retract. The only thing is, the hit box on these guys and on your attacks is poorly designed—it’s hard to tell if you’re going to land a hit or not, even if everything is ostensibly lined up. This idea extends to some of the platforming in the game. At times, there’s not a ton of clarity when you’ll land on a platform, or when you might fall through a crack, or fall off a ledge. It’s this inconsistency in the intuitiveness of these finer controls that kills platformers, and almost kills Yooka-Laylee. 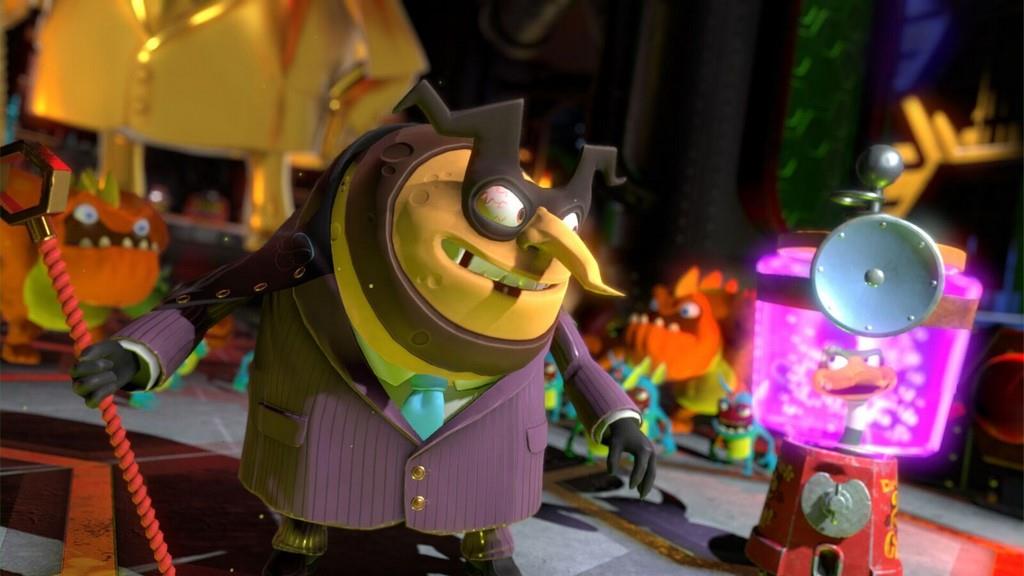 The level design suffers from a poor organization of tasks and collectibles, and poor communication of its main ideas and what matters. The levels themselves are at times over-labyrinthine, but are always a delight to explore (when the mechanics are firing off soundly). It’s a testament to the designers that these places are so fun to get around. The collectibles relate to one another in weird ways, and feel needlessly shoehorned into the levels in order to allow you access to more side adventures and gameplay. This isn’t a huge issue though, but it becomes one when the story is so poorly communicated, the dramatics of which are negligible at best. I’m not looking for The Last of Us, but if you drop a story into a game it shouldn’t feel like it was added as padding or like it's this constant nod to an older game. The characters and personalities are fun, but I don’t really know or care about any of them in relation to the game’s larger ideas. And the game doesn’t have to have a larger idea, but you can only get away with winking and nudging and going “this is just a silly game” if everything else about it is super sound. 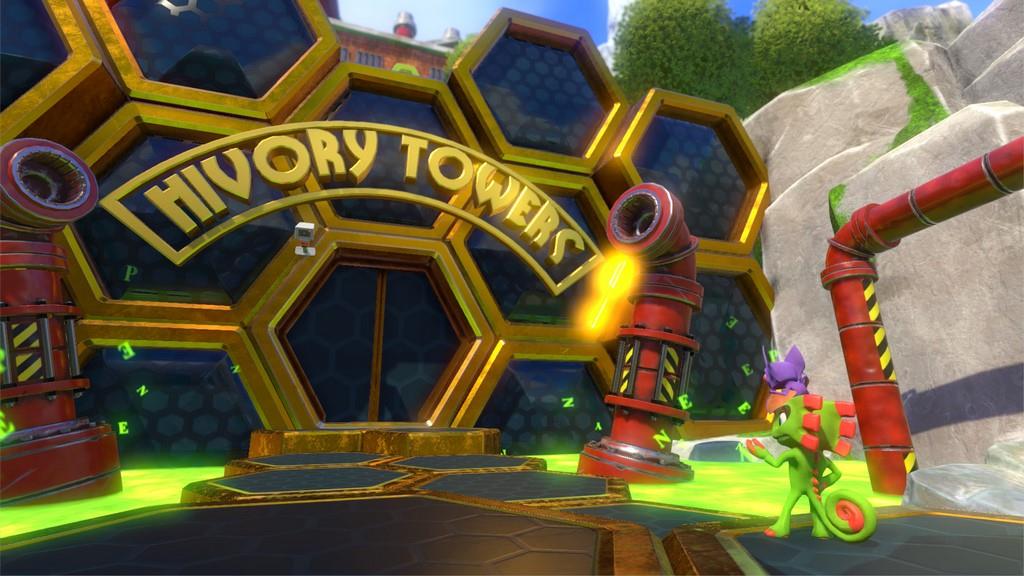 The thing about nodding to older games is you have to also shake your head “no.” You have to say, “No, most 3D platformers from the Mascot era had bland or uninteresting combat,” or, “No, these older games didn’t always have the best mechanics or level design.” But nostalgia-glasses are also a huge concern. People seem to forget that Banjo-Kazooie had stakes in it; there was a sense of danger and a sense of gloom to the affair. Banjo’s sister was in danger! He had to rescue his sister! Gruntilda was motivated by jealousy and rage. She loomed over the game, even if she was silly. She wasn’t motivated by the bottom line or fearing a board of investors, and it didn’t all feel like a big a laugh.

That stuff is silly, and self-referential, sure, but it’s also DOA if the game doesn’t hold up. I feel like that attitude ends up plaguing the very design of the game. Great purely mechanical games exist, and games with simple stories that are silly exist, but they’re motivated by something other than a throwback. Yooka-Laylee is only interested in being delightful—and it is—but that’s just not enough for what it wants to be.

Yooka-Laylee is gorgeous. It is a delight to behold. But its design and mechanics don't always match up to its ambitions.