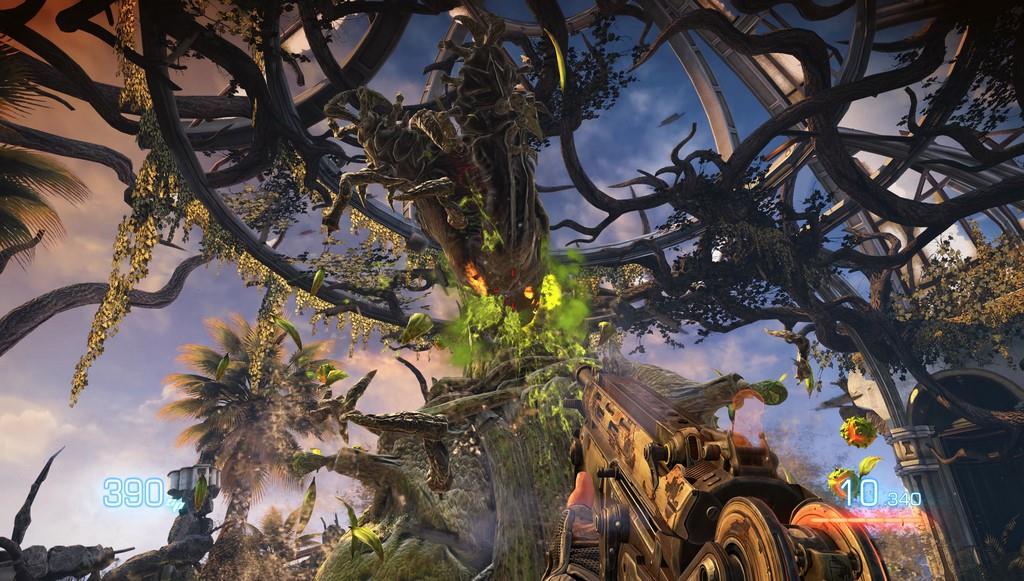 Written by Patrick Aloia on 4/6/2017 for PS4
More On: Bulletstorm: Full Clip Edition

Bulletstorm: Full Clip Edition is a rerelease of the original Bulletstorm that came out last-gen. The timing is excellent. Bulletstorm was developed by Polish developer People Can Fly, and was underappreciated upon its release: too unserious and inspired of a shooter in a crowd full of severe, uninspired ones. But with 2016's bounty of inventive shooters (DOOM, Overwatch, and Titanfall 2 come to mind) Bulletstorm started to look like that weird kid from high school who did his own thing, but was actually cooler than everyone. While Bulletstorm’s thrifty windbreaker hasn’t aged a day (excellent gameplay, pacing), his flattops aren’t so fly at the moment (flat/rote level and art design), and don’t get me started on those frosted tips (dull/troubling plot and characters), leaving me with the an overall good impression that could benefit from some self-reflection and literally anything other than frosted tips. Thanks for staying with me on that.

In Bulletstorm you play as Grayson Hunt, a defected soldier with a lack of self-control whose personality is marginally less generic than his name. Due to, uh, alcoholism—this goes more or less unaddressed throughout the game—Grayson plunges himself and his crew into the Ulysses, a ship that holds the cartoonishly nasty—in a good way—Star General Serrano, who betrayed our would-be hero by tricking him into killing innocent civilians. The plunge ultimately costs half of Grayson’s crew their lives (two guys), and 10,000 other innocents aboard the Ulysses, leaving Ishi, a young ex-pat who idolized and followed Grayson, a cyborg who is slowly losing control of his mind and body as the AI embedded in his cybernetic parts seek to dominate him. Ishi, like a rational person, hates Grayson after this stunt, but is resigned to working with him until they can get off this part Mad Max, part Generic Sci-Fi planet called Stygia. But what the game lacks in compelling storytelling and setting it makes up for in spades with its combat.

There's a huge effort to reward stylistic play in Bulletstorm, and it goes a long way. The game is less about killing efficiently than killing creatively, performing "Skillshots" that reward the player with points for doing badass moves. It's fun to do "ass-shots" and "dick-shots" on their own, but the "instinct leash" invites a whole new type of sci-fi whip mechanic into the combat that is really wonderful and unique in the genre, even today. Whipping enemies towards you and obliterating them in mid flight with a shotgun, yanking them towards massive thorny brushes, or sending whole groups of enemies flying by slamming the whip to the ground is endlessly satisfying. Every hit feel like it counts and has a lot of character to it. Bulletstorm also offers enough opportunities throughout the single-player campaign to spend the points you receive from Skillshots that there is a clear feedback loop that excites the player just enough to push forward, without overwhelming them with opportunities.

My one issue with the combat, separate from the level design, is that the enemies will occasionally populate in a way that doesn't encourage the kind of creative fun that the game thrives on. I found the sliding kick and instinct leash battle tactics inefficient when I was overwhelmed with tougher enemies who were positioned in a way that wasn't just challenging, but not fun. And unlike the new DOOM, which encourages confrontation and combat experimentation through its level design and glory-kill mechanics, there is no benefit from jumping into the fray outside of the possibility for more points and maybe being able to pull off something cool, so when its functionally hard to do, you just kind of resort to using the guns, which are great. But I can't emphasize enough how much the game really shines in its combat. Its fun with explosions, mixing and matching combat moves, tactics, and weapons. Yeah, it could use tweaking, but there really isn’t anything that plays like it, and it plays really, really well.

Unfortunately, that issue with the number of enemies and positioning is tied to the level design, which is flat, and kind of like you're playing a railshooter sometimes. You can end up on autopilot due to the simplicity of the level design, whether that's always seeking cover or just mowing enemies down. The best moments are in the levels where the game isn't afraid to put obstacles in the way that don't necessarily work to your advantage, and force you to be creative without an obvious solution. This blend is so hard to do, and Bulletstorm does it more often than not.

The overall bland art design that makes up Stygia is a letdown, too. Some of it has a real cartoonish fun, and some areas of the game in particular are really well realized. But when the game leaves the Disneyland-esque areas of Stygia, the blandness of the sci-fi world the game is building, and the plot tied to it, becomes even clearer. The standard enemies for that matter vary from tribal post-apocalyptic knock-offs to run-of-the-mill space marine. The game has some really awesome bosses and unique set pieces, like a level where you control a giant robot dinosaur is a particularly awesome and super original combat sequence, but, much like the art design, is a really inconsistent sort of thing.

Bulletstorm’s biggest issue is its poor plot and characters. The game doesn’t quite work as a pulpy sci-fi gorefest: the plot and characters, with the exception of Star General Serrano, are far too tame. And this tame plot also isn’t very good or original, and is pretty irresponsibly written. The line between hyperviolent indulgent fun and straight up worship of sadism is thoroughly blurred. To bring back an earlier point, the Bad-Ass and Inexplicably Doable Female (TM) Trishka confronts Grayson about how his whole crashing into Ulysses thing killed 10,000 innocent people, to which he replies, “That’s 5,000 less than last time." This display of callousness that would make Machiavelli cringe goes completely unexplored, doesn’t warrant a single nod from any element of the game except that Grayson just has a lot to learn in a rather generic way. Grayson regrets endangering Ishi, and ruining his life, and making "stupid mistakes," but murdering a New England township’s worth of innocents doesn't really ever get addressed. This would be fine if the game wasn't so concerned with Grayson's redemption, or if it didn't have him quit the army because he was being deceived into killing innocents. Bulletstorm game suffers from “well because he’s the good guy” syndrome as so many have before it. Also Grayson is an alcoholic and his alcoholism leads him to these decisions and this is similarly only vaguely addressed considering the story frames him as the hero. Some quippy lines and irreverent humor can’t save the bad plot and completely confusing characterization of the lead hero. There are more than a couple of good ones, but most are pretty cringe-inducing.

So, yes, Bulletstorm’s single-player campaign by itself would probably get a 7 from me, and that’s really on the strength of the gameplay, and the occasional moments the game really swept me up in its glee. But that would mean I’d be ignoring the Echo Mode. Echo Mode functions as a pure gameplay experience, stripping away the clunky story and letting you go as buckwild as possible trying out Skillshots and dope moves to rack up points. You can compare your scores with other people’s online, and if you’re looking for a community, it’s there and they’re doing awesome stuff with Bulletstorm’s combat. I don’t think people knew how to enjoy this when it first came out and I’m not sure if they will know how to now, but I really hope so. This is coupled with the new Overkill Mode, which basically has you play through the campaign with all the bonkers weapons and skillshots pre-unlocked, which is fun, but not necessarily the same amount of engaging as Echo Mode. Echo Mode bumps up the score slightly since its replay value is pretty high. There’s also a new DLC for the Full Clip Edition called Duke Nukem’s Bulletstorm Tour which you play through the story as the man, the myth, the legend himself, in a game more befitting his name than the last one released. Honestly, this game benefits from Duke’s inclusion because it takes all the bonkers, awesome stuff about Grayson and distills it so I’m not left trying to reconcile exactly what kind of generic anti-hero the developers want me to cheer for.

Bulletstorm: Full Clip Edition, even as a rerelease, still fits a bit awkwardly into what it wants to be, and I can't tell if that's due to conflicting visions or one seriously muddled one. It wants to be more kitsch than it is, more serious than it ought, and it misses the mark because the game sometimes feels like a reskin of a more generic shooter. But there are enough great things in Bulletstorm that it really won me over, and if you’re as big a fan of dumb, bonkers shooters as I am, I’d say it’s worth revisiting this underappreciated gem in the Full Clip Edition. Otherwise, you might be better off playing DOOM or Titanfall 2 to scratch that itch. Then again, you get points for shooting enemies in the ass. What else do you want?

Despite lackluster plot and characterization, and inconsistent level and art design, Bulletstorm: Full Clip Edition is still a brilliant, imaginative shooter six years later. It looks and plays even better in the current generation, with a few new goodies that are worth giving a look.