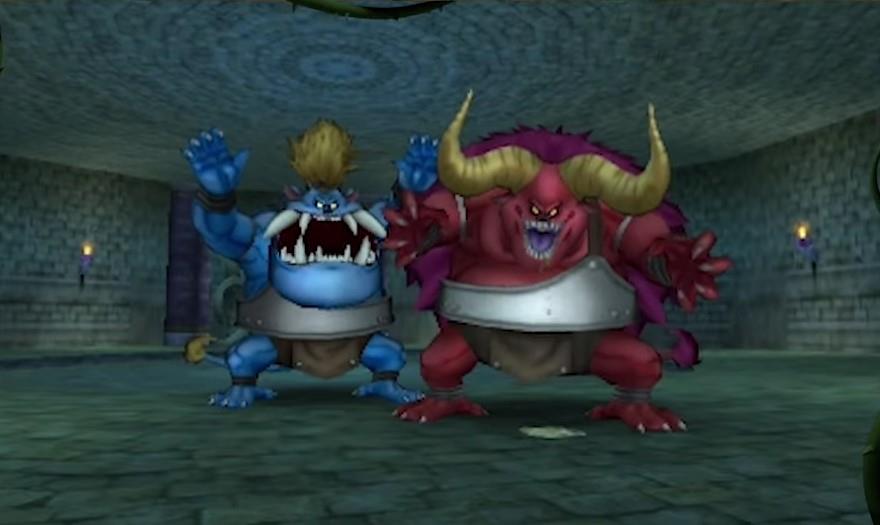 Written by Nicholas Leon on 4/11/2017 for 3DS
More On: Dragon Quest VIII : Journey of the Cursed King

While playing this game, I came to realize just how far games have come. 2016 saw the release of Final Fantasy XV, a milestone in JRPGs, and a change in formula for the Final Fantasy series in general. And of course, there was The Witcher III: Wild Hunt in 2015, which was a revolution in single-player action-RPGs.

So, with the way the gaming world is at large today, where does that put Dragon Quest VIII in 2017? I don't remember seeing many ads for it offline or online, so, to me at least, it's flown under the radar this season. But when you consider the release of games like Horizon: Zero Dawn and Breath of the Wild, it's no surprise there's been so little fanfare for this game. That's a shame, because this game, for what flaws I can find and its time-displaced release into this era of videogames, still holds up well.

This game has humor, this game has interesting characters. This game is as cute as it is serious. It's art, by Dragon Ball creator Akira Toriyama, is unique. And the environments in the world are as unlike as they are familiar to RPGs today.

Here are the positives. First: the story and the characters. Players come to these games for the people they play as, and the adventures they go on. If there isn't either of that, it's not worth playing. Luckily, this game is worthwhile in both of those respects. The protagonist is a nameless young man called the Hero who is in service to a troll named King Trode. You know the the subtitle of the game? Yeah, Trode is the cursed king. Part of his charm is his voice acting. He's basically an old, fat British Yoda. He also runs like Naruto, so how could I not love him with those skinny arms and fat body wobbling when he runs? The Hero's quest is to find the man who cursed King Trode and his daughter Medea by turning them into a troll and a horse. Starting out as the first party member is an OG named Yangus, a cockney bandit-turned-sidekick who always has the Hero's back. He's a classic tank character, and the game makes it look like they have a pretty strong relationship. The next character you meet is a magic-focused character named Jessica. The voice acting for her is great and British. She was raised in a fancy-pants family, but she was never about that life. The final party member is Angelo, a magic-wielding knight who has some great knee-high boots. 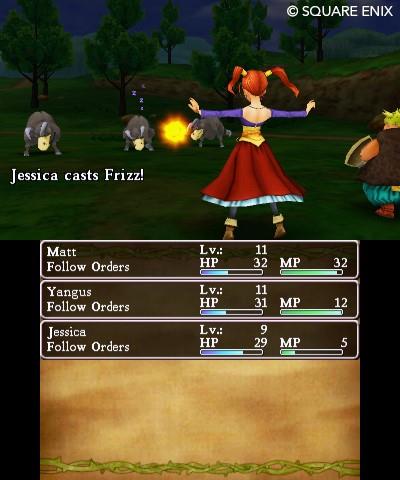 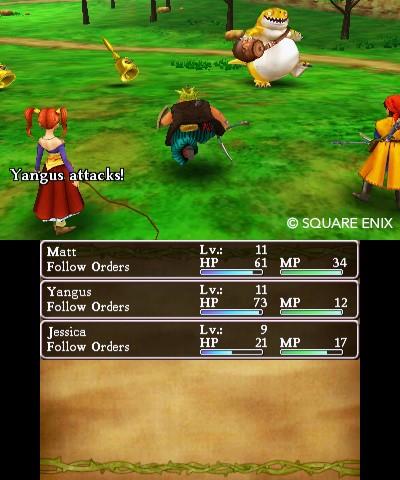 All the characters can use multiple weapons and spells for both offensive and defensive purposes. The characters can even fight using their fists. Although I can't imagine why anyone would just their fists in an RPG (hint: loot), that does make for a unique and interesting combat option. The game balances every character's ability and magic usage to make party combat effective, although player input is also hugely critical in that area. There's not as much personal exploration of the party members in this game as there are in modern games such as Mass Effect, but enough is known about them to make them compelling.

The world of this game is amazing. All the designs are unique, whether it's a town whose feature is a giant statue of a goddess, or it houses the game world's equivalent of the Pope. These are a lot like the worlds of Knights of the Old Republic, only they're all a lot smaller and more frequent. Seeing as the roads between the places are infested with monsters, it's necessary that they are like this. The towns serve as places where the party can shop for weapons and armor. items, and to save the game at the local church. Nearly every town has some story significance to it. Whether it's another clue on the party's journey to find Dhoulmagus, the primary antagonist for much of the game, or simply to help people they meet on the road. The party is fully formed on the eastern half of the world in what is ostensibly one giant prologue training the player for what's to come. But once the player leaves that continent, the world just expands. And with that come all these revelations of what the game offers, all the routes players can take, and so much more. 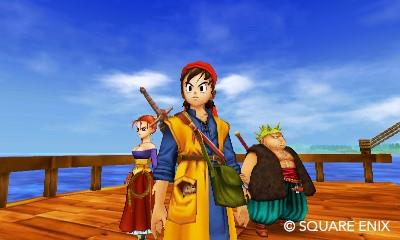 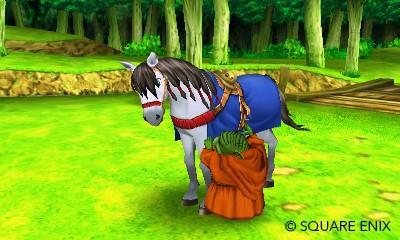 The biggest difference between this game and today's RPGs is this little thing called action. The game's combat is unapologetically turn-based, as another Square Enix series was until last year. The combat is both satisfying and a bit of a pain. Progress is my favorite aspect about this game. I get such a great feeling whenever I pass a milestone and progress the story. I breathe a huge sigh of relief when the party beats a boss without anyone dying the time before we leveled up. Then again, sometimes I just want to explore the world. Most of the time, I don't care about the hundreds of enemies that are between the party and the place I want to get us to. The grinding can be a pain, and weaving through the enemies, outmaneuvering them so we won't get into a conflict, can also get tedious.

This is the most conflicting area of the game. The combat is not scaled, but that's understandable. The player is meant to reach certain areas of the game when they are at a certain level, but what's amazing is that there is a way that the player can beat these difficult enemies, if they correctly strategize their party. The worst thing that can happen in the game is the death of the party. If that happens, they are reverted to the nearest save point, but with only half of their gold. All items and attained experience will be there, and gold is easily gained by spamming some enemies, but where's the fun in wasting the same enemies again just to get back to where I was or was heading to? Luckily there is the option of speeding up combat, which is new to the 3DS version. There is also the option of Quick Save, which is saving in the field, as opposed to the nearest town church. Essentially, the combat is satisfying, but I'm not always up for it. It can feel hampering, like a giant boulder blocking the road preventing me from progressing the story. 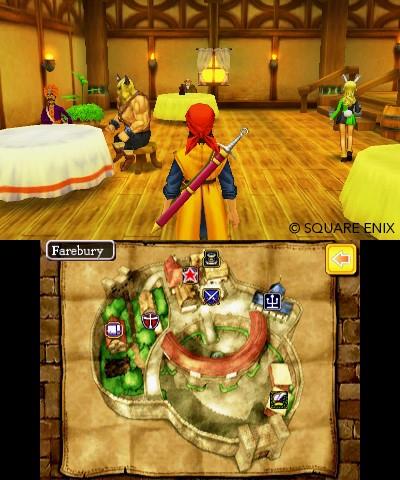 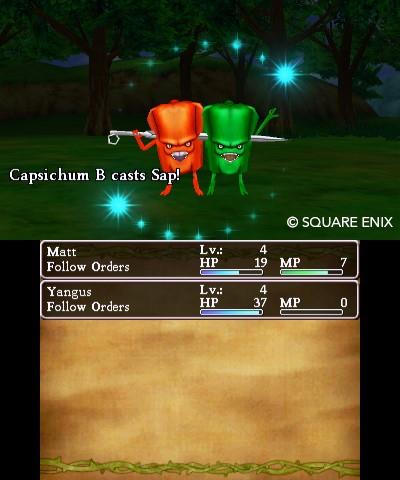 Now, for the leftover seed in the pumpkin pie. The game's treatment and portrayal of the sole female party Jessica, is problematic. And it also breaks a golden rule of classic RPGs, which is surprising. I don't know about anyone else, but I like new armor sets. So when I discovered that I couldn't change anyone's appearance when I equipped new armor to them, I was a little upset. Then when I equipped a Dancer's Costume to Jessica that raised her defense a significant amount and discovered that she was basically wearing a bra, I was surprised. For the first time in my life, I found myself questioning the logic of a video game. How could a bra protect more than a covered torso? And why was I not able to change anyone else's outfit? The audacity!

Another thing about Jessica is a skill tree of hers: Sex Appeal. Each time she reaches a new branch in that, a text states: "Jessica realizes just how sexy she can be!" This is as interesting as it is problematic. On the one hand, it is objectifying Jessica for her appearance, but on the other, it layers her character even further and even adds to her humanity. Jessica is the daughter of a noble, but she's also rebellious and tough. Is there really anything wrong with her realizing that she is also attractive? Technically no, but at what point does it stop being in service to the character, and bleed over into fan service? The function that Sex Appeal serves for the game is to prevent Jessica from being hit in combat, because monsters find her form fine. That actually helps out quite a bit, because it allows the party to get in a few extra hits.

Through all of that though, this is a great game for the 3DS lineup. It amazes me that the system can support a game this huge. It serves as a template for many of the games that are on shelves today, even if they weren't directly inspired by this title. On top of that, there are some new additions to the game, such as alternate companions, and a large sidequest devoted to taking pictures that take the player on a scavenger hunt throughout the game world. It has proven to be pretty relaxing.

This game is good. I have made good memories, and hope to make many more. I'm going to miss these characters, their quirks, their catch-phrases, and their flaws. It's a good egg.