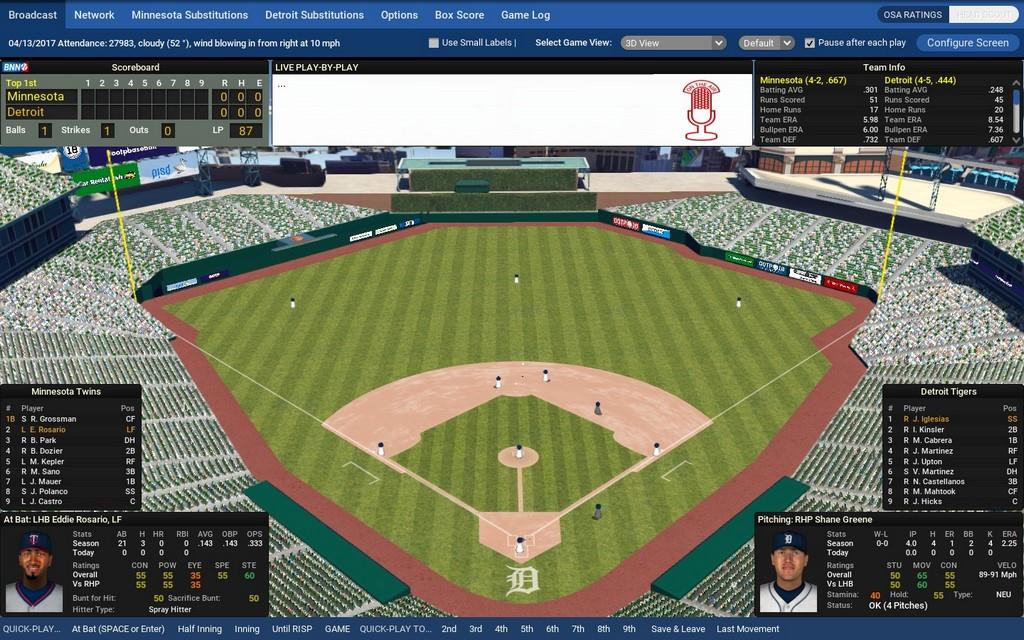 Out of the Park Baseball 18

It’s that time of year again with the 2017 baseball season underway. While I don’t watch it as much as I used to, and never followed it as closely as others do, baseball has been my favorite sport for a long time. While it’s been nearly 30 years since an Ohio team has won the World Series (I live in Ohio), I always hold out hope each season that the time will finally come where the Buckeye State can take home a world series win and not blow a 3-1 series lead and lose in extra innings in Game 7—though I’ll definitely give props to the Cubs for the win and both teams for the series itself. Then again I’m one to talk, as each year for the past several I’ve been taking a look at the Out of the Park baseball management simulation series in the hopes of taking a team to at least the playoffs. Well, let’s continue that tradition as I take a look at Out of the Park 18.

If you’re new to the series, Out of the Park has you manage a team and season in a variety of ways, such as managing an existing team from one of many leagues included, playing a historical game or series between two teams, or even creating your own custom baseball world if you’re so inclined. Once you begin with managing your own team for a season, you’ll go through the standard options, such as setting your name and which team you wish to manage from a multitude of leagues and teams. However, new to this year is a Challenge Mode which, while optional, implements a few changes to how you play. For instance, commissioner mode and the player editor are disabled, certain AI team control settings are disabled, long-term simulation (i.e. “auto-play until…”) is only available during the off season, and your achievements and season scores will be tracked in your personal OOTP online profile as long as you’re logged in, which lets you compare your career and accolades with other OOTP players around the world. If you’re looking for a more competitive management simulation experience, give Challenge Mode a try.

When going through the options to setup your career and team, you can choose to turn on Commissioner mode to give you control over other teams and edit players, which basically allows you to make things easier or more difficult for you. You can also choose to be just a manager, or to become a general manager as well. General managers have more responsibilities and actions to perform than just a regular manager. Once everything is setup you’ll go to your “office” where you can check out your upcoming schedule, work out strategies with your various coaches, and…well, basically manage your team. Depending on how in depth you want to go, you can go as far as looking at the team’s finances, various top prospects in your league affiliates, depending on which league you’re managing for, and check out scouting reports. The one downfall to the series is that if you’re someone who doesn't normally doesn’t pay attention to a team’s stats or financial situations in real life, you’re likely to get pretty lost here. That’s why I set things to give me as little responsibility as possible. I could probably do a review on just this part of the game and it would still take a while to explain everything. 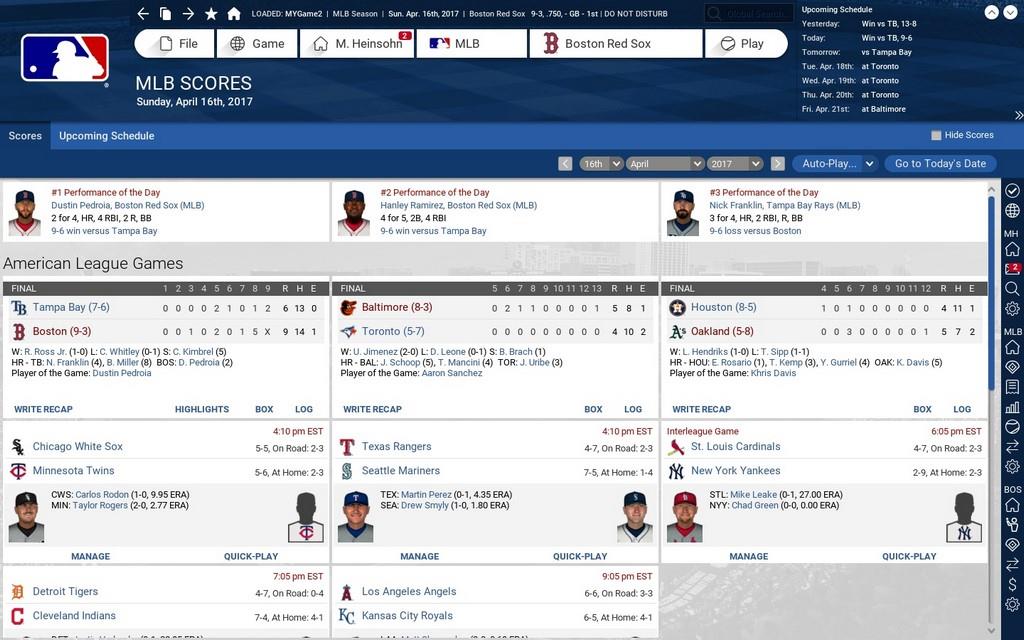 Once you start an actual game you’ll have a chance to look over your lineup before actually starting. During the game itself you’ll control most aspects of the game and there’s a lot of strategy at play here. You can choose to simulate the last pitch of an at-bat or the entire at-bat pitch by pitch. Either way you’ll choose what kind of pitch to make if on the field, or how to swing, bunt, or steal if you’re up to bat. The catch is that beyond choosing what to do you don’t have much control over the overall result. Again, strategy comes into play here as you’ll likely want to choose actions depending on the situation. On offense you may want a good batter to swing away at a pitch in the hopes he knocks it out of the park, while on defense you may want to intentionally walk someone who’s having a really good day at the plate.

If you don’t want to play the full game or maybe only control one aspect of it, you can simulate to any time during the game from a half inning to the entire game. Between games you go back to your office to continue managing your team while coming up with new strategies for the upcoming game and changing what you need to so you can improve your team. Naturally you’ll want to do your best to keep your team’s morale up and keep checking the scouting report for any potential trade opportunities. I’ll be honest, my favorite parts of the game are during the actual games as I normally don’t pay much attention to stats and such in real life; I enjoy watching the games so I enjoy playing the games. 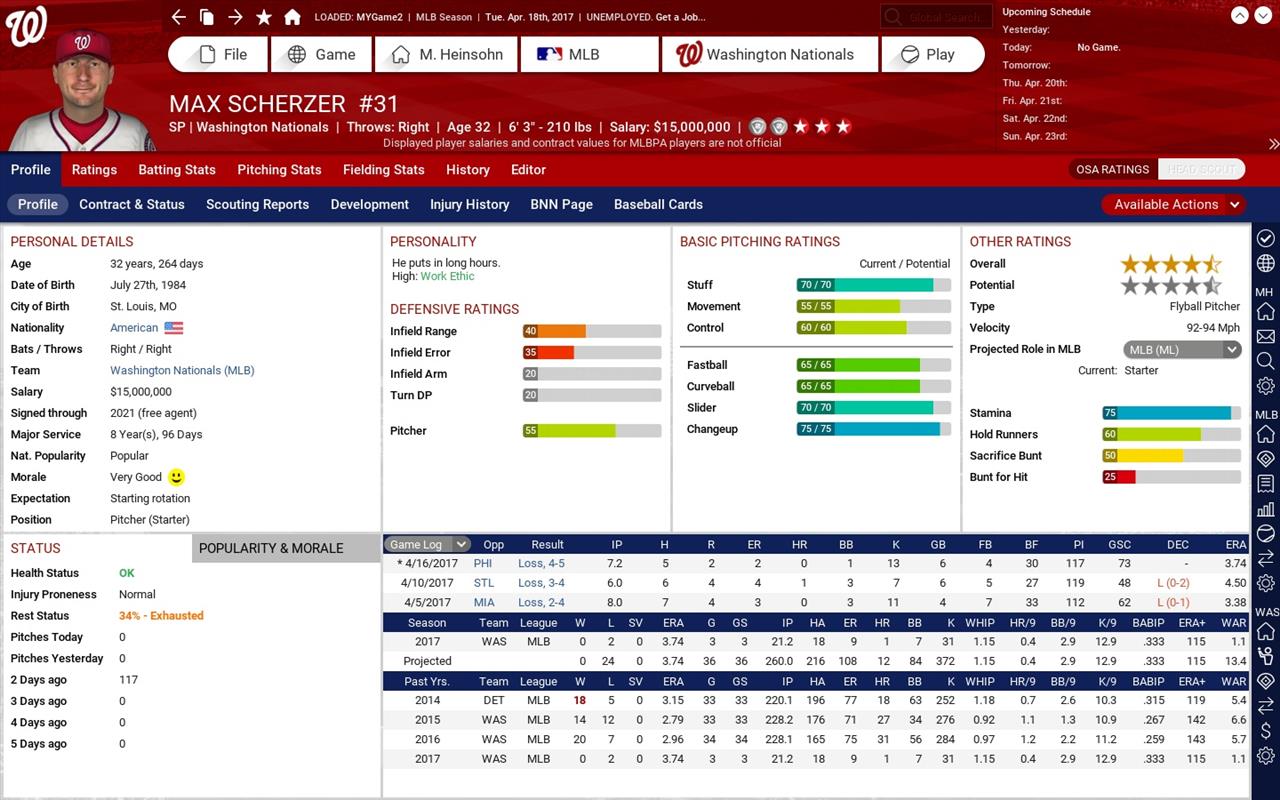 As stated towards the top of this review, there are several options on the main menu you can choose from besides just starting a standard game. You can also choose to play a game or series between two historical teams, or even play any season from 1871 through 2016. However, if you really want to go all in you can start a new custom game. You can not only create your own real world league based off of the MLB or eight different international leagues, but you can create your own league from scratch. Everything you create can be based on real life or whatever you wish to come up with, including the players and league structure. Finally, if you create a regular league you can then create a tournament or winter league.

If you’ve played previous entries in the series, especially last year’s, then most of this should feel familiar. However, there are some changes from last year’s iteration. Some of them are minor, such as having the 2017 opening day rosters for several leagues, including MLB and MILB, plus an improved AI, a redesigned injury system, and so on. However, there are a few changes that are a bit bigger in scope. One of these is that many 2017 CBA rule changes are incorporated in modern MLB games. CBA stands for Collective Bargaining Agreement and basically describes the rules of employment and the financial structure of Major League Baseball. The changes that recently took place last until December 1, 2021, and change a few things, such as no longer awarding home field advantage during the World Series to the winner of the All-Star Game, and a few other financial things. That’s how in depth this game gets when it comes to simulating the world of baseball.

Out of the Park 18 once again provides an excellent simulation experience and with the recent improvements to the AI and to keep up with the changes in the MLB, it’s hard not to recommend it to those who want to try to manage their own team or league. While no major mechanics were introduced this year, such as the 3D View that was introduced in the past year or so, the improvements and additions that are there keep things as fresh as possible when it comes to simulations. While the game can be overwhelming to someone who doesn’t follow the ins and outs of the sport, Out of the Park 18 is still an excellent experience once you learn how it works.