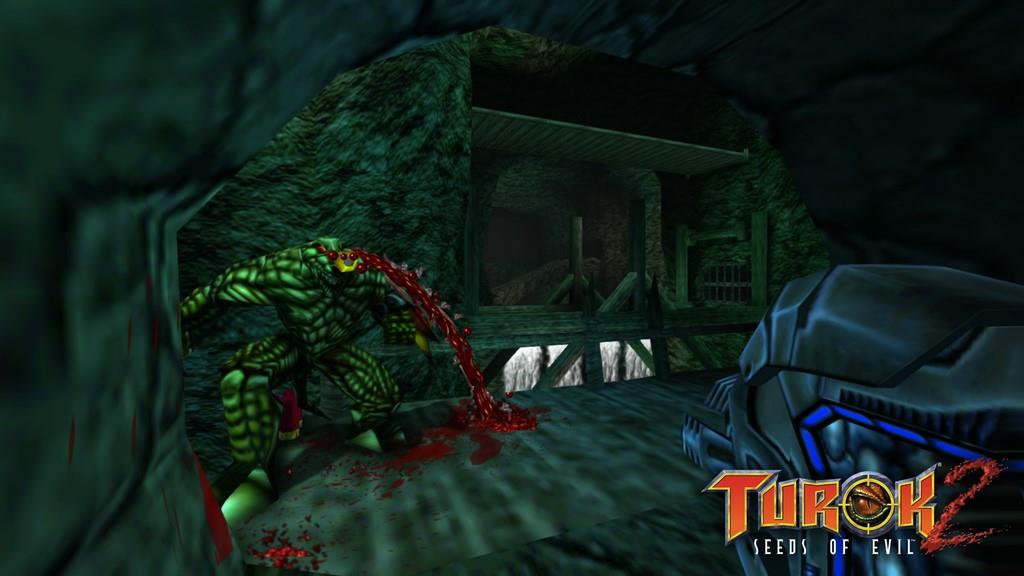 When I reviewed the remastered Turok: Dinosaur Hunter last year, I thought it was a fascinating time capsule of late 90s console FPS design. Situated tragically between Quake and GoldenEye 007, it was at once simplistic and way ahead of its time. Turok 2: Seeds of Evil then was Iguana Entertainment’s 1998 rebuttal to GoldenEye. Seeds of Evil was a shooter that built massively on the first Turok but for its time was a little too ambitious. On release Turok 2 had a lot of new features and implemented a streamlined update of the first game’s rather clunky gameplay. That said it suffered from atrocious framerate chop, murky lighting, rampant distance fog, and its fast-paced action was a little more than the N64’s intermediate, admittedly awkward controller could handle.

Much like Rare’s 2000 follow-up to GoldenEye, Perfect Dark, 1998’s Turok 2 flew a bit too close to the sun and paid the price in playability and fluidity. But also like Microsoft’s 2010 HD remaster of Perfect Dark for Xbox 360, Turok 2 Remastered finally lets this ambitious shooter off the chain to achieve its true potential. Night Dive Studios has done their typical impeccable job in polishing Turok 2 up to modern standards, so fans and newcomers alike can experience this game the way it was meant to be played.

Seeds of Evil takes place an undisclosed time after Dinosaur Hunter. The game gives no backstory about what happened to Tal’Set after he defeated the Campaigner and seized the Chronocepter, so there isn’t any kind of transition from the first game to the second. Turok 2 begins with the new Turok, Joshua Fireseed, jumping through a portal into the Lost Land. He is greeted by an extraterrestrial woman named Adon, who fills him in on what’s been happening in the Lost Land.

The story is even cornier than the original game and Turok’s Native American heritage gets even less emphasis this time around, but honestly I love this kind of story. It’s pure late 90s comic book scifi, a genre where anything goes as long as it’s fun. Turok 2 stands alongside Space Channel 5, Half-Life and the aforementioned Perfect Dark in that the plot is silly and bombastic, but most importantly the gameplay is relentlessly fun.

Turok 2 consists of only 6 levels, which may not seem like much but these levels were positively massive for their day. Compared to GoldenEye, Perfect Dark or Duke Nukem 3D’s levels, which could be finished in around 10 minutes, A Turok 2 level takes roughly an hour to complete, and that’s if you know exactly where to go and what to do. Each level contains a multitude of objectives to complete, from rescuing captured children to destroying minibosses and activating beacons. Failing to complete these objectives will kick you back to the beginning of the level when you try to exit, so this is where Night Dive has made a major improvement by adding objective markers to the HUD.

The level design is a healthy mix of linear and open-ended, funneling you along a general forward path but allowing for a decent amount of exploration and encouraging hunting for secrets. The levels are so big that they almost feel like miniature open world sandboxes, and earlier levels contain areas and secrets that can only be accessed once you have acquired abilities from later levels. One of Night Dive’s most welcome additions is a simple quick-save option, allowing you to save your progress wherever you are. Turok 2 originally had a checkpoint system where you would jump out of the level and talk to Adon. You can still use these portals if you really want to, but the quicksave makes the game much more enjoyable than the previous Turok. These checkpoint portals are still in the game though, and helpfully Adon will refill ammo, health or warp you to any other checkpoint in the level.

Turok 2 not only improves upon the level design of its predecessor, but also tightens up—and greatly expands upon—the FPS gameplay. While the velociraptors and other miscellaneous dinosaurs return from the first game, the human enemies are largely replaced by the Primagen’s mutant, cyborg dinosoid army. For the late 90s, enemy variety and behavior is impressive; there are multiple classes of dinosoid, from quick, berserker melee fighters to grenade-tossing bruisers and even snipers. The cyborg enemies will even activate cloaking devices to evade your gunfire or self-destruct, predator-style, when they’ve taken mortal damage. In addition to the rank-and-file soldiers there are also minibosses and the occasional undead. Nearly every enemy type will dodge and take cover, which was almost unheard of at the time the game was released.

A colorful opposition calls for an equally eccentric arsenal, and this is where Turok 2 really delivers. A few holdovers from the first game appear—the pistol, the Tek bow, the shotgun and grenade launcher—but this time nearly every gun has a more powerful counterpart, and Turok 2 throws in a few off the wall weapons for good measure. The pistol can be swapped out for the 3-shot-burst Mag 60; the shotgun is supplanted by the meaner, semi-auto Shredder, which fires ricocheting flak shells. If you truly need to rock-n-roll the Firestorm cannon is essentially a minigun crossed with a plasma rifle, a ferocious weapon that literally minces entire rooms of dinosoids. Then of course there is the infamous Cerebral Bore, a freak alien weapon that fires a homing projectile which drills into an enemy’s skull, cores out their brain and then explodes.

As you can imagine, Turok 2 is a pretty violent game, even when compared to contemporary M-rated titles like Perfect Dark or Resident Evil 2. A well-placed headshot will shatter a dinosoid’s cranium, limbs can be blasted off with a close-range shotgun blast, and explosives produce some fairly generous gibs. Dying enemies splatter the red stuff across nearby walls, and corpses invariably bleed out into growing puddles of crimson plasma. The second level alone begins with an open-ended sequence where you ride an armed, armored triceratops, allowing you to ventilate, frag and impale the fleeing, terrified dino mutants. It surprises me that such a gory, grisly game showed up on a Nintendo console back in the day, but in any case it’s viscerally satisfying and a lot more fun to play than the foggy, clunky Dinosaur Hunter. 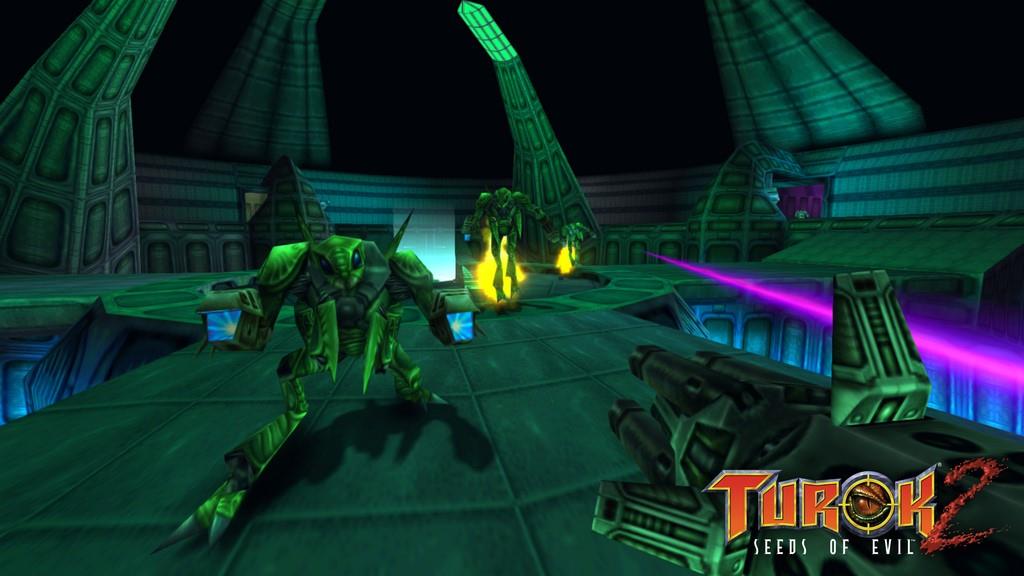 Turok 2 is just more fun in general, in part because it’s a better game but also because Night Dive did a real bang-up job on the port. It runs without a hitch on modern operating systems, and this smoothness extends into ease of use and flexibility in menus, options and conveniences like quick save and HUD crosshairs. Night Dive have also spruced up the somewhat blocky 1998 visuals by adding bloom, enhanced particle effects and optimized physics. Naturally the game supports widescreen HD and ultra-HD resolutions, anti-aliasing and the ability to eliminate the original game’s ubiquitous distance fog. Night Dive even included the option to swap between the game’s N64 soundtrack, or the enhanced CD music included in the game’s rather janky late 90s PC port. It’s those extra goodies and details that push a modern remaster over the top and demonstrate the love and dedication of the developers.

When it was released nearly two decades ago, Turok 2 bit off way more than it could chew. Its action was too fast, dynamic and violent for the hardware it was running on, but now that it finally has room to breathe and the conveniences of modern systems and interfaces, Turok 2: Seeds of Evil can be just as gleefully bloody and entertaining as Iguana Entertainment originally intended. Unlike its predecessor, which was cumbersome and tedious even on current-gen hardware, Turok 2 is definitely worth the $20 asking price and is yet another example of why Night Dive Studios is the master of resurrected nostalgia. Don’t be surprised if this prehistoric FPS becomes your latest guilty pleasure.

Delightfully old school and satisfyingly violent, Turok 2: Seeds of Evil can finally meet its true potential thanks to Night Dive Studios. Framerate chop and cloying fog have been replaced with tight action and a host of modern conveniences that will make you yearn for the good old days of first person shooters.