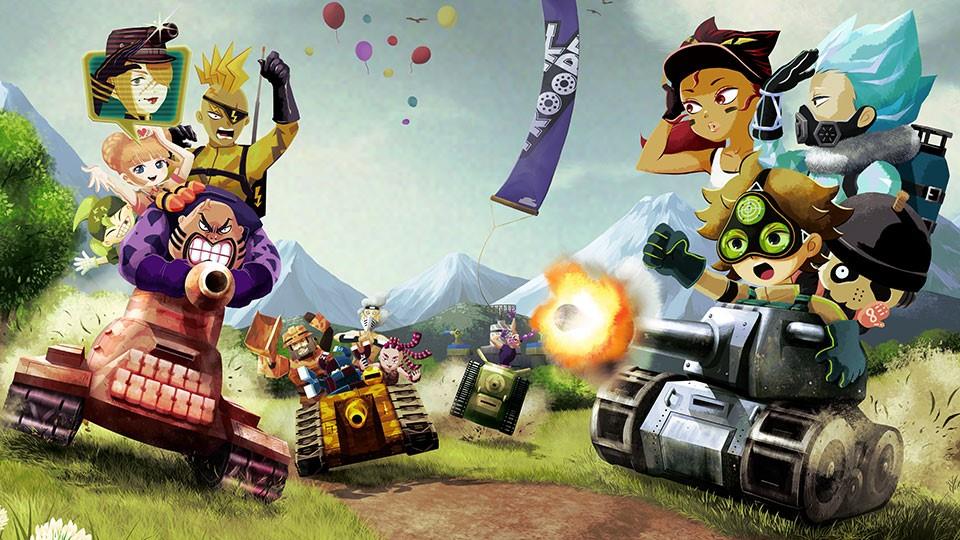 Tank Troopers is not a big game, and it knows that. But it does have some serious muscle packed into its tiny frame. The biggest amount of content in this game comes in the single player modes. The first, Take Orders, consists of thirty objective-based missions. The objectives you get here are quite the variety, ranging from a race against bot tanks, straight-up battles, popping balloons, and shooting at giant bouncy balls to get them into the goals a la Rocket League, or escorting bombs to bases, as well as tower defense.

The other big focus, in both the single player and multiplayer aspects of the game, are the titular tank troopers. These consist of thirteen characters, each with their own special power-ups. Whether it’s healing, faster movement, reload speed, paintball ("Feel the paint!" is my favorite expression from the game) or huge damage increases, this is a cute but functionally important addition to the game. In the first half of the game I didn’t feel the need to deploy them as much, but later, they certainly came in handy. Sometimes the troopers can serve as a bit of a cop-out, especially with Medica, who heals at a pretty fast rate. But then, when you’re facing off against a boss who can destroy you in one shot, or surrounded by smaller tanks who take bits of your health off that can offset that healing, I think you could say that things are balanced.

Nintendo follows tradition here in searching for the next big innovation in this game. Here, it’s all about motion controls. Now if that turns you off, don’t worry, you can disable them. Really, motion controls don’t play a huge role in this game, it’s simply another challenge for the player to fight through. The motion controls perform two functions in this game: to aim, and to swivel the turret. I’ve spent a lot of time with the game, having to complete it for this review, so of course I have a different perspective than someone who may want to just get the game—controls and all—immediately, and if they don’t, they just give up on it. What I’m saying is that this game takes time. It seems that the developers knew they couldn’t just give players missions to run through willy-nilly, so that’s probably why the game has a time limit. Speaking of which, the time limits range from a minute and thirty seconds to ten minutes, so you get plenty of room. Sometimes the time limits aren’t a bother, and sometimes, especially towards the latter half of the campaign, it can be a pain.

What follows are a few experiences I’ve had in the game, all from the single-player mode. They were full of triumph, disappointment, frustration, and everything in between.

So, for the first big boss battle, I was dropped into a huge desert arena, with tall swivel turrets on all four corners of the map, along with explosive barrel drums, as well as some destructible and indestructible walls that made for a small-scale, spread out obstacle course that required quick maneuvering in case I got caught in crossfire. And, starting out, the colossal tank was within visual range, if not firing range. It started racing toward me, and I needed to get out of its way before it shot me. Sometimes, I got out of the way in time. Sometimes, it destroyed me. I came up with an idea: instead of just pelting this huge tank with my tiny tank’s shells, chipping off its health one or two percentage points at a time, I could use the assets the game gave me! I went with Big Gunnar, this guy whose upper body was almost as big as my tank. He provided a huge damage increase that bought me about five to seven percent of damage on the tank, rather than the one or two percent I had been dealing before. Of course, I also had to account for reload times of both regular shots and Big Gunnar shots, which were roughly the same, but I also had to compensate for the trooper’s limited time with me, as well as his own reload time. And with all of that, all I had to do was dodge the tanks around me, as well as the huge turrets that a ton of stopping power, and avoid running into the explosive barrels as well as the immovable barriers, and just keep an eye on the colossal tank. It was a foolproof strategy, until I died. And I died many times. Eventually, I got to a point where I just had to throw strategy to the curb, and just go at the boss like a mouse to an elephant. For some reason, the boss was more or less stuck on the rim of the arena, trying to go back and forth, but blocked in some way. I pretty much just exchanged between Big Gunnar and regular shells, and eventually, I beat him. This was a mix of my previous strategy, and a bit of just pure, dumb luck. And really, that’s a common thread in this game. 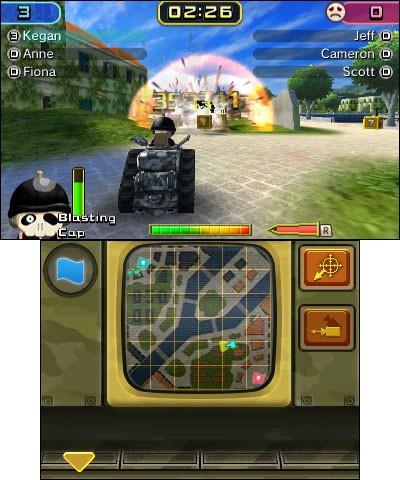 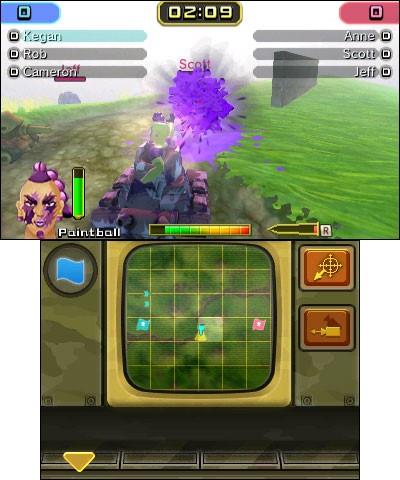 As I’ve said before, later on in the campaign, things get difficult, absurdly difficult. One mission had me playing tower defense with about four AI tank allies. There were roughly four openings where the enemy could get in. And the enemy could spawn anywhere. Sure, I had a minimap that showed me where they were, but when I had no idea what type of tank was spawning where, I couldn’t really account for how I would set up a defensive strategy. By this point in the game I was using my troopers as much as possible—it’s at least very difficult without them—and they helped out a great deal. I had three minutes for this one, and the tanks came at the base hard. There were many times when I was defending one part of the base from an attack, and I would lose because an enemy would get in from another way, whether for my AI companions lacking in defensive skill, or for absence of any defenders at all. And yet, by sheer luck, I won with the help of those same wild card, sometimes lackluster defenders. I had just defended one end of the base, and there was about twenty seconds left on the clock. My allies were at the other side of the base, and were clustered together. There was one enemy left, and the blip was in my allies’ area. I let the clock run down, and I won. Through all this tense running and gunning, I won by chance. It was an interesting time, to say the least.

What’s also interesting is the mission structure. This became apparent in a subsequent mission. This time, I was attacking not one, but four bases. And I was attacking them by myself. The enemy AI that was defending the base I was attacking was more effective than my previous companions, and yet, I beat that mission quicker than I had the previous one. This particular mission mixed a boss tank, turrets, and pushing a giant bomb towards each base, in addition to the time limit, of course.

Still, for all the flaws with the single player campaign, the game is pretty fun. The tanks are small and cute. It definitely feels aimed towards a younger crowd, but that doesn’t mean a different sort of crowd can’t enjoy it. 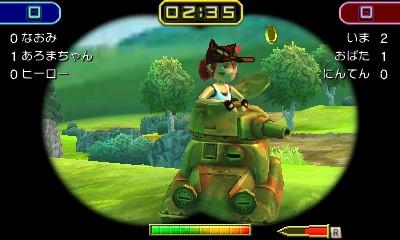 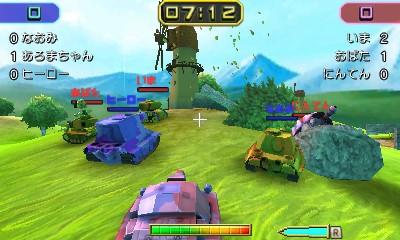 There is another aspect of the single-player campaign that adds a ton of content and replay value. It’s called Custom Tank. In that, you are allowed to purchase up to thirty-six tanks, of all shapes and sizes. You can also customize them with up to thirty-four paint jobs. Going back through missions with giant artillery pieces can be fun, but it takes a lot of commitment to the single-player in order to accrue all the funds required to get the entire tank arsenal and paint jobs.

Multiplayer comes in two forms: download play for those who don’t have the game, and traditional multiplayer. Both allow for six-player matches, and have three game modes: free-for-all, team battle, and bomb battle. In the first two modes, the objective is to destroy other players’ tanks. In bomb battle, players have to push or shoot the bomb over to the opposing base. Download play only has one map, and multiplayer has five. Truly, the more the merrier with multiplayer, as it can be a good bit of fun, provided the players take time with the controls.

Tank Troopers is neither a great game, nor a horrible game. It’s a niche game aimed at a wide audience that has its upswings and its downturns. Mission dynamics are diverse, with enemies both larger and smaller than you, or faster and slower. Weather plays a role, and your tank troopers are a pretty interesting bunch. Tank Troopers is not a big game, but it definitely has some muscle behind it. It can be really frustrating at times, and greatly rewarding at others. My tip: have patience with it.

Tank Troopers is neither a great game, nor a horrible game. It's a niche game aimed at a wide audience, and has its upswings and downturns. Mission dynamics are diverse, with enemies both larger and smaller than you, or faster and slower. Weather plays a role, and your tank troopers are a pretty interesting bunch. The game is frustrating at times, and greatly rewarding at others. My tip: have patience with it.