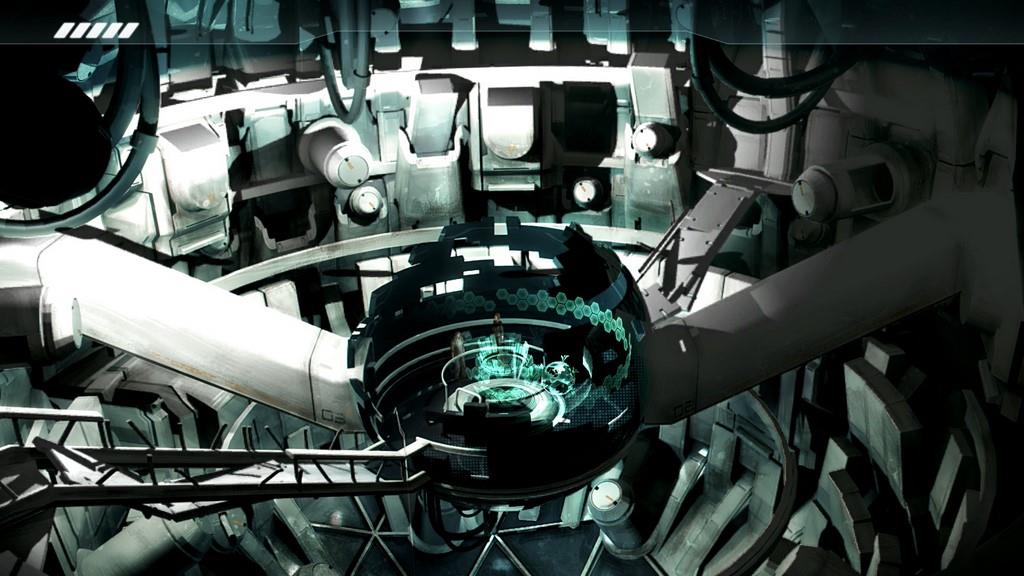 Divide should’ve been my jam. It has a near-future artstyle. It has that old school isometric angle that conveys such enormity in some of its scenes. It has noir-like lighting, noir-like X-Files music, and noir-like detective work to be done.

Well, in theory it has all these things. Divide is one of those video games with vision but little direction. It has promise but limp execution. Ideas with no idea how to bring them together. Divide is an exercise in missing the mark. Not through negligence or incompetence. Not through laziness or apathy. But from forgetting the ironic Golden Rule of gaming: Don’t waste my time.

Divide isn’t a time waster. It wastes your time.

You are David. Widowed husband of a distant wife. Loving father of an adolescent daughter. Man who’s stuck in a non-story for so long that it’s easy to forget all those things. Where Divide wants to be a lonely experience, it ends up being an empty experience. Where it wants to be a dungeon crawl, it ends up being a dungeon crawl back and forth. And back. And forth. Where it wants to be sci-fi, it resorts to mind-numbing bleeps and bloops, very neat holograms, but ultimately does little more than turn a twin-stick adventure into an endless runner, congested with a computer-login equivalent of barrel bashing.

Divide wants to blur the line between truth and lies, but that’s giving itself too much credit. There’s a Rubik’s Cube of misdirection, red herrings, and dead ends, but that’s more in the level design, not so much in the narrative. David is inexplicably transported to another time and place. But there’s so much padding in the level design, and so little progress made with every conversation, that it’s strangely easy to forget the goal. The mystery it wants to unfold left me wondering aloud why I could or couldn’t unlock certain doors or computers—rather than unfolding the mystery of how to get David back to the time and place he’s from. 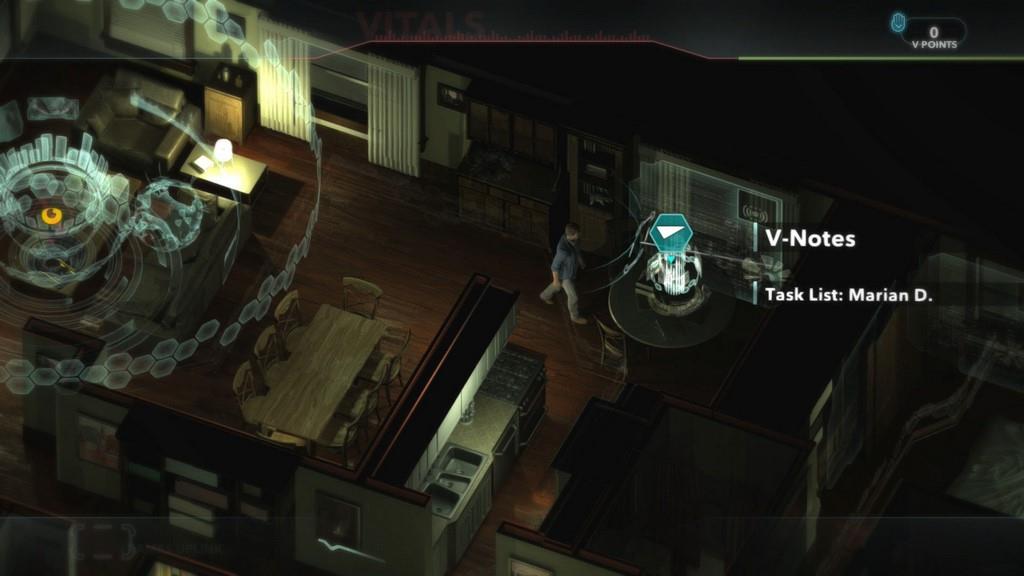 The gameplay is a baffling mixture of too many fake check-in points and too few save points. In-game, David scans check-in points around the map that award Vestige Points. These V-points unlock bits of in-game advertising and diet propaganda to read. Actual save-game points are hard-locked to locations on the map. It’s easy to play 15, 30, or 45 minutes and never see a save point anywhere. If you try to quit the game, it’s very good at telling you how long it’s been since your last save. That’s a good feature! But hey, life happens. If you have to quit a game, and you haven’t come across a save point in awhile, well, you’re out of luck. You can replay those 15, 30, or 45 minutes again when you load up your game again.

The fake check-in points typically award you points of a different nature—but sometimes not. It’s not as visceral as breaking barrels, but I appreciate the hacker-lite aesthetic. These check-in points would be a clean way to delineate where I’ve been on the map (checked checkpoint, I’ve been here; unchecked checkpoint, new area), but that’s not how it works. In fact, I’ve played hours and hours of this game and can’t figure out how it works. Sometimes I’ll backtrack to a location—there’s so much freaking backtracking in Divide—and a checkpoint will be grayed out. I used it. I’ve been here before. That’s good to know. But sometimes the checkpoint isn’t grayed out. It’s unchecked, even if I know I’ve been here before. Even if I know I’ve been here a dozen times already. Is that a mistake? Or is it the developers resigning to the fact that there’s entirely too much grinding for fake points in order to unlock the next door to the next part of the map...so I can grind more fake points to unlock the next door? I can’t find a pattern. 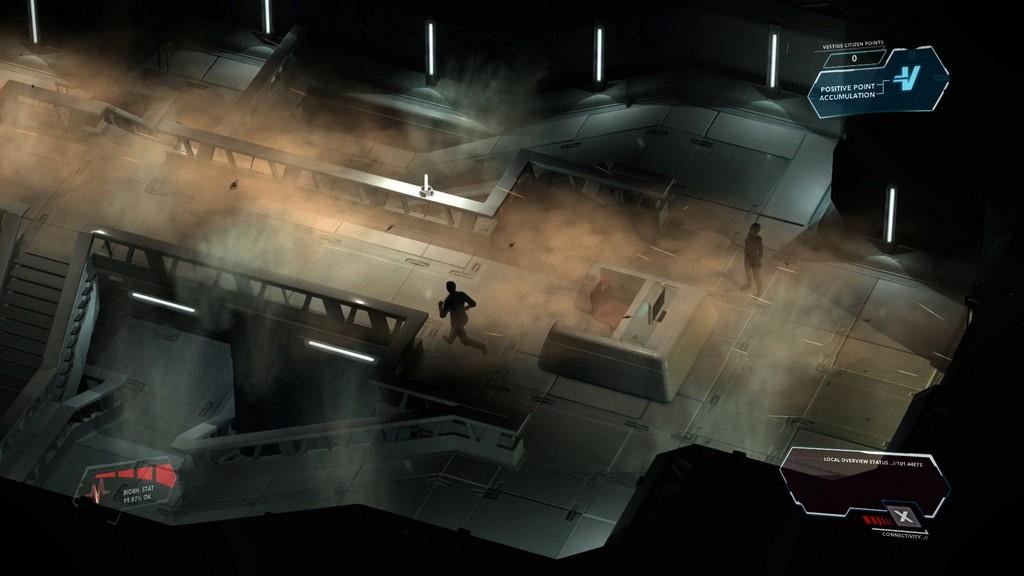 The architecture is fun for a few minutes. But the environments are so samey, so utterly cut-and-paste looking, that it contributes to the feeling of always being a little bit lost in Divide. The map is vague and only just so helpful, but lookalike hall after lookalike room after lookalike stairway all contribute, again, to that feeling of always being a little bit lost. It’s exhausting. The level builder goes out of their way, in some rooms, to overdo the presence of stairs, bannisters, overpasses, and underpasses. Some entire rooms feel like meandering flights of stairs, broken up with awkwardly placed cubicles and inexplicable piles of immovable containers. It's like somebody invited drunk M.C. Escher to a Future Architects of America mixer. It’s not the kind of puzzle game I thought I’d signed up for.

Aside from the three-quarter isometric view, an occasional static adventure game scene may come into play. They're reserved for low-action scenes, filled with dialogue or basic walk-and-talk moments in the narrative. These are nice. I don’t mind them. They’re often visually stuck in some concept-art limbo stage of development, which is weird, but okay.

From the beginning, it's obvious that the main character, David, isn't a soldier. He’s a stay-at-home dad. I think. It’s not obvious. Regardless, it makes sense that combat wouldn't be his forte. But the combat system is so entirely messy that when I was faced with two security droids, the HoloLens feature kept shutting down and reactivating the same robot over and over rather than shut both robots down. The aiming is iffy, the hitboxes are iffy, and the entire system is better designed for searching crates than fighting droids. 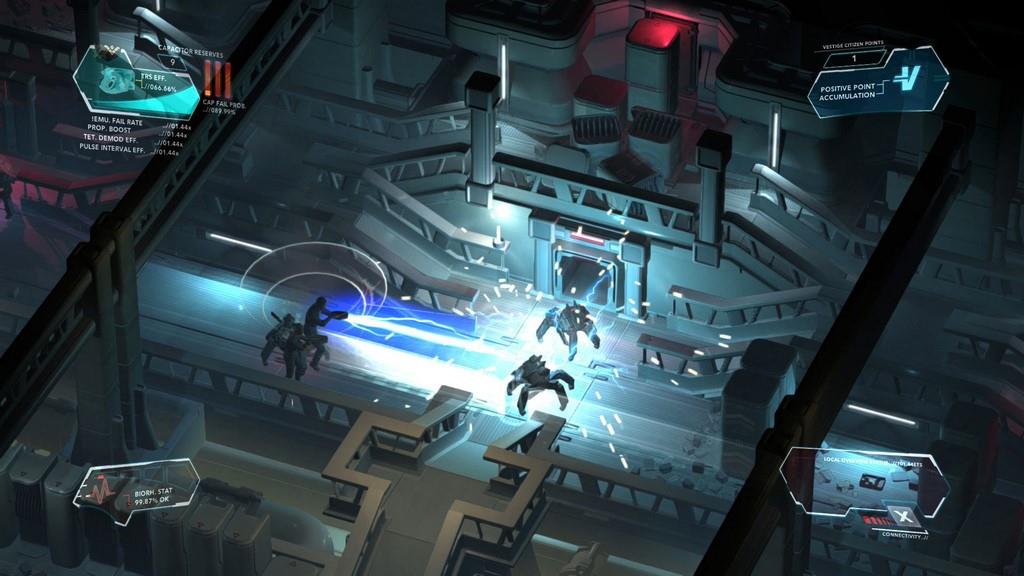 For a game that suggests it's less about violence and more about storytelling, there isn't much story to tell. Overly long story bits make little to no progress. You're just not ever getting anywhere by talking to anyone. That’s somewhat consistent with the gameplay, however. It’s kind of a bummer.

A majority of the writing appears to have gone into the dull radial menu codex. I mean, if “This sensor detects changes in return voltage and alters the frequency until the discharge is appropriate for the target’s physiology” is the kind of writing that gets you worked up into a narrative lather.

The environmental storytelling is likewise weak. There are corridors and computers and vending machines and crates. There's no writing on the walls. No lifelike details scattered on the tabletops. Nothing to make it worth searching around, except for the purely gamified exercise of acquiring V-points to spend on opening crates to acquire points to spend on unlocking computers to spend on…

The game fetishizes HTML garbledegoop more than I do. That much is clear. I mean, I'm not sure how much of a programmer’s high I'm supposed to get when I get a “../Dispenser Info Log” that starts popping off about my “////…##########...//[LeachFarm Extract Tool]...:” Is that what digital decay is supposed to look like? Is that encryption software? I wouldn’t know. 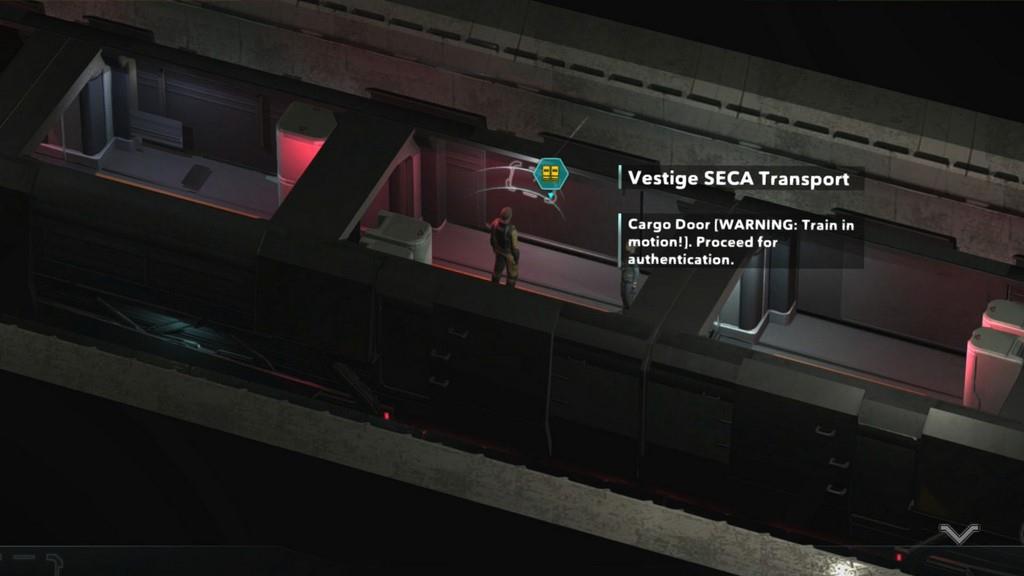 To tell you the truth, half off the invisible inventory items sounds like some gizmo Marvin the Martian would be fretting over. “At last, after 2,000 years of work, the Illidium Q36 Space Modulator!” Marvin says. Well, in Divide’s case it's a Service E-Laser Tetonic Demodulator, but I'd say that's pretty close. I feel like I’m missing something by not nerding out on all this. What’s “Tetonic” mean again? Does it have anything to do with Grand Teton National Park? If it does, it’s not telling me.

Bug-wise, there are a few. I even got indefinitely stuck on some invisible geometry while looking for a save point. There was no getting out of my stuck spot. The game was kind enough to inform me I'd be losing 22 minutes of gameplay if I exited now. Nice.

Hours in, I was still uncertain of what I was doing. Search every crate, collect every V-point, extract every hashtable. I knew to do that much. But what it accomplishes? It unlocks the next door, sure. But otherwise? Who knows. Still can't help but feel Divide is wasting my time. 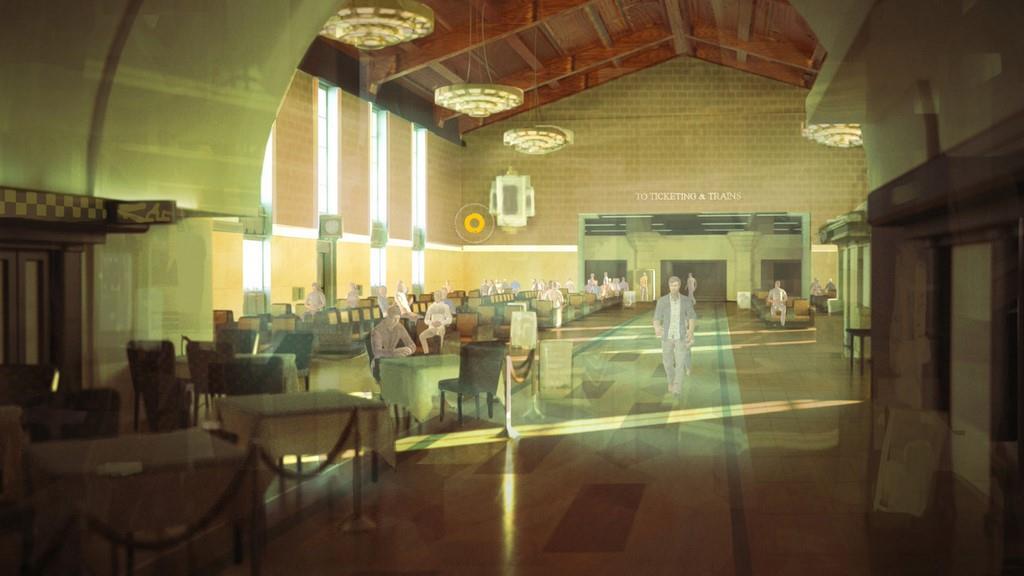 Every upgrade, whether it's an additional “ablative armor puck socket” or whatever, is a random find. Find an upgrade in a Freight Offices locker here, an Autolabor Routing crate there. I guess it’s nice they skipped drawing up an endlessly branching tech tree, but I’m not sure this was a brave solution. It simply made it unclear what was being upgraded, why it was being upgraded, or how much I benefited, specifically, from such upgrades.

Kurt Vonnegut once said, “Every sentence must do one of two things: reveal character or advance the action.” While Vonnegut was obviously talking about books, I think it's rather applicable to video game writing as well. There's too much padding in Divide. Too much fluff. Too much do-the-same-thing, over and over, ad nauseum, that —as Vonnegut instructs—neither reveals character or advances the action. You know what? I would even accept silent, revelatory moments as “action” in the case of Divide. The game certainly wants to feel lonely. It wants to feel inwardly contemplative. But it's not either of those things. It's a computer terminal mouse crawl. It's a point-and-clicker that reveals it's world in painfully dry emails and corporate-speak memos. And yet, sadly, those emails and memos often have more character in them than the David specifically, and Divide as a whole.

Divide doesn’t excite, doesn’t surprise, doesn’t reach out, and doesn’t look in. It tests my patience, wastes your time, and can’t keep its eyes on the prize. The cool architecture is basically copy-pasted to death. And the gameplay, which is thankfully short on bullets, is still rehashed ad infinitum. It's a twin-stick shooter that removed the gunplay but replaced it with little more than checkpoints and crate scrounging. It often feels like there’s no end in sight.