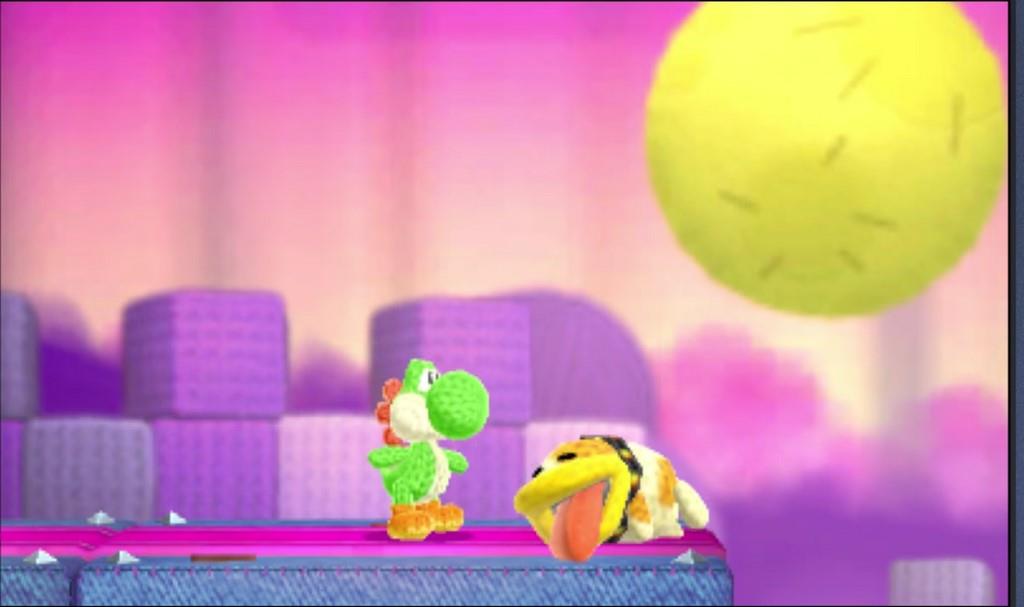 When Yoshi’s Woolly World was announced for the Wii U, my initial thought was that it would be the Mario Universe equivalent of Kirby’s Epic Yarn. That’s fine for the most part; Kirby’s Epic Yarn was an okay game but I found it a little too easy. When gameplay was shown prior to its release, I thought it resembled Super Mario World 2: Yoshi’s Island and Yoshi’s Story. That got me a bit more excited for the game, but I never picked it up. Then Nintendo ported it over to the 3DS. If it worked okay (mostly) for Super Mario Maker and Hyrule Warriors, would it work out for Poochy & Yoshi’s Woolly World?

The story starts with Kamek turning all of the Yoshis on Craft Island into bundles of yarn and scattering them throughout the island. It’s now up to Yoshi to save his friends. It’s a simple story but that’s really all it needs to be for something like this. The game takes place over six worlds with eight stages in each. The goal of each stage is to make it to the end while collecting any hearts, flowers, yarn bundles, and beads that you come across. Each of these items have a purpose other than just collecting everything: hearts give you health, flowers open up extra stages, beads let you create patches to make things a little easier on you, and stamps can be used to craft your own Yoshi.

If you’ve played past Yoshi games, such as the aforementioned Yoshi’s Island or Yoshi’s Story, then the controls and mechanics should come pretty naturally to you. Yoshi has the ability to eat enemies and turn them into yarn balls to fire at enemies and other objects to uncover various secrets. He can also flutter in the air by holding the jump button after jumping and, with good timing, you can almost remain in the air indefinitely. The controls are rather solid and as I was playing it did feel like I was basically playing a sequel to Yoshi’s Island, just without a screaming Baby Mario on my back. Graphically the game looks great. Granted there’s only so much you can do when porting a Wii U game and, while I’m not a huge stickler for graphics, Nintendo did a pretty good job on the look of the game.

I mentioned the various items you can collect in each stage and what they’re used for, but didn’t go into detail. Throughout the game you’ll get notices that you can create new Power Patches. These let you spend beads to create patches to take into a stage that will give you some added benefit, such as resistance to fire, or all yarn balls being bigger than normal. Very useful if you’re having difficulty in a stage. Collecting all five flowers in every stage in a world will unlock an extra stage at the end of the world. Then there are the two collectibles that I kind of question: the bundles of yarn and the stamps. Each stage has 20 stamps that are hidden behind various beads (you don’t have to collect a certain number of beads to get them, just the bead that has the stamp) and after collecting so many, you unlock new patterns you can craft with. Craft what exactly? Other Yoshis. Collecting all five yarn bundles in a stage will unlock a different Yoshi that you can play. There are over 50 Yoshi’s to unlock, plus you can craft 10 of your own and pass them around via Streetpass. 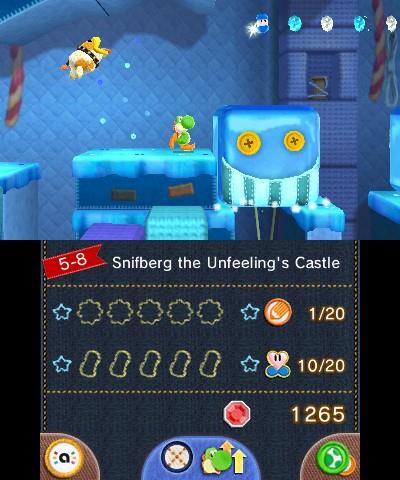 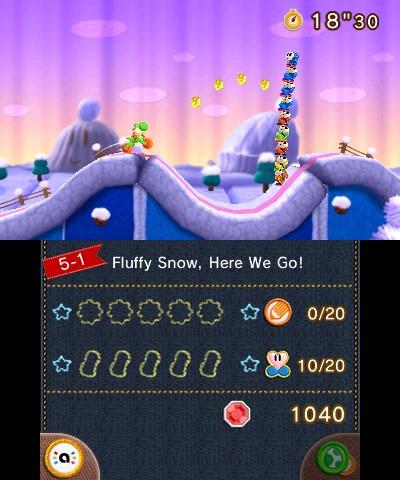 However, this is one of my minor qualms with the game: the different Yoshis are purely for aesthetics. Now don’t get me wrong, I understand why this is part of the game. It’s nice that the game lets you unlock the different Yoshis and create your own to add a bit of customization to the game. With the customization you can either use the patterns you unlock from the stamps or go all out and decorate your Yoshi however you wish. My minor complaint lies in the fact that the yarn bundles can sometimes be pretty well-hidden (same with the flowers). Getting them all can mean a lot of searching around. Add that the “reknitted” Yoshis don’t do anything different or have any differing qualities to them, and it doesn’t give me much purpose to go back and 100 percent the game—other than provide the challenge of finding them. Then again, creating a Yoshi using random doodles is pretty entertaining and, again, does add some customization.

Even though this is a port of the Wii U version, there is that whole “Poochy” part of the title. An addition to the 3DS version are several stages in which you control Poochy during endless-runner stages to collect beads. You’ll unlock one stage per world, and completing these stages will give you three missions to complete, which adds a bit of replayability. Basically these stages can help you build up beads to purchase the power-up badges. However, while this addition is pretty nice, there’s one thing that was removed that’s real puzzling: this version has no multiplayer. That is extremely puzzling when you realize that in addition to unlocking over 50 more Yoshis, you can still swap between the green and red Yoshis between stages, making the removal of multiplayer even more puzzling.

The only other minor complaint I have is the difficulty. The game offers two modes of play: Mellow and Classic. You can switch between them on the fly. Mellow mode is definitely made for younger players. Yoshi now has wings giving him the ability to infinitely hover in the air. You also get three mini-Poochies that act as yarn balls for attacking, plus they can sniff out various secrets in each stage. If you want to keep the infinite hover but not use the mini-Poochies, you can actually turn them off by using the touchscreen. It’s also easier to collect the stamps because each bead that hides a stamp is clearly shown. If you’re playing on Classic Mode, a lot of the challenge in the game is simply finding all of the items as they can be in some painfully hard to find places. There were several times even in the first couple of worlds where I noticed I missed a flower or yarn bundle and don’t remember ever seeing it in the first place. 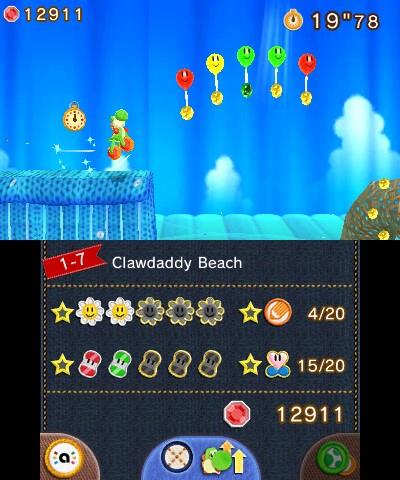 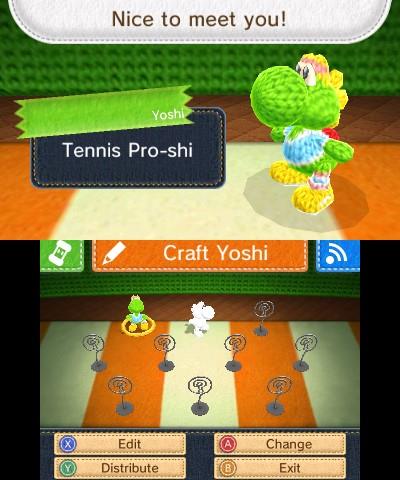 I like a challenge, however, so I played the game on Classic Mode without using any power-up patches and didn’t have too much trouble. There were the occasional frustrating moments, such as finding a dead end and having to jump in just the right spot to reveal a secret cloud you need to hit to progress through the stage, having to find a certain strand of yarn to eat but the strand blends into the background too well, or even trying to progress vertically up the screen and having something drop on your head that you didn’t see coming until it was too late. Other than that, though, the game didn’t present too many difficulties. Even the bosses weren’t too difficult. You essentially can’t get a game over. When you die you just go back to the last checkpoint. Even still, there’s no penalty outside of losing any flowers, stamps, and yarn bundles you’ve found, but you keep all of the beads you’ve collected. Even Kirby’s Epic Yarn penalized you by taking away beads when you died, and those were less useful than they are here.

All that said, though, Poochy and Yoshi’s Woolly World is still a fun game. The graphics aren’t too bad for a port of a Wii U version, and the difficulty can seem easy for veteran gamers, but younger players might have a bit more of a challenge on their hands. The Mellow Mode is great for younger players who might have a difficult time, but it still doesn’t completely hold your hand. The bosses, while not too difficult, are fun to fight, even if it’s not too hard to figure out how to fight them. It does befuddle me that multiplayer wasn't included, since you still start off with two Yoshis you can swap between, and Poochy is in the title. If you haven’t picked up the Wii U version of the game yet, the 3DS version is worth checking out. But be warned that the few differences might not be enough of a reason for Wii U owners to also pick up this version unless they want to play it on the go and don't mind missing out on multiplayer.

Poochy and Yoshi's Woolly World is a nice port of the Wii U version, though anyone with the Wii U version might not find enough to warrant picking up this one. The difficulty is easy for veteran gamers but could be challenging for younger players. That doesn't, however, stop it from being a fun and casual game that will remind you of Yoshi's more classic outings.