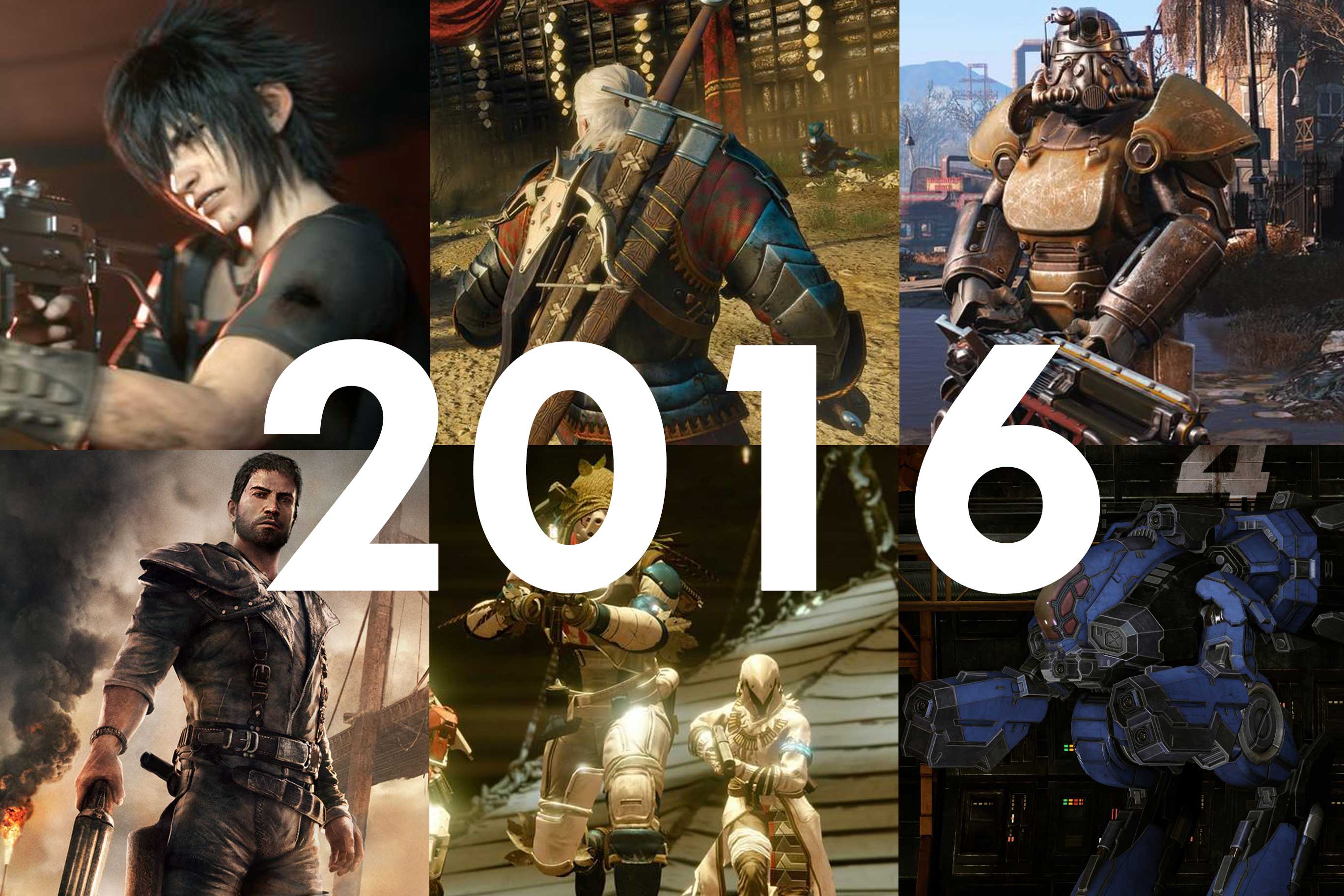 Looking Back at 2016: The games we played the most

Today we are talking about the games that we played the most in 2016, regardless of when they came out. These games are either things that have been in our backlog for a while or games that have enraptured us in some way.

John Yan
Fallout 4 - I can’t believe how many hours I’ve actually put into this game. It’s not my favorite Fallout (that honor belongs to New Vegas), and Fallout 4 certainly has its problems. The dialogue system was a step back. There were so many missed opportunities, otherwise. But I do love the world that Bethesda has built, and their DLC kept me busy the past year. I can always fire up the game for a quick radiant quest, or just go about building up some settlements.

7 Days to Die - If I had discovered 7 Days to Die in 2016, this would definitely be the game I would've played the most. I’m not one for survival world-building games, but 7 Days has a lot going for it, and a few of my coworkers play it as well, making it a fun, social game. I bet this will be the game that holds me over in 2017.

Sean Colleli
Hard Reset -  It’s short, sweet, and about as close as you can get to playing a modern Blade Runner game, outside of maybe the Deus Ex series. Plus after thoroughly enjoying Flying Wild Hog’s Shadow Warrior 2, I wanted to revisit their freshman effort. And what an effort it is. The game is brief enough to finish in a few days but the action is tense and unrelenting, reflecting the best qualities of classic shooters with enough modern enhancements to keep the experience fresh.

And man, the setting is habit forming for a cyberpunk geek like me. The environments are literally dripping with atmosphere; rain-streaked future noir cityscapes that perfectly channel Terminator, Robocop, and the aforementioned Blade Runner, not to mention the games those films inspired, like System Shock 2, Perfect Dark, and Omikron: The Nomad Soul. Hard Reset might not be particularly deep, and its plot is a bit obscure (in a delightfully foreign film kind of way), but it manages to be both hauntingly beautiful and addictive like the best 90s FPS. I really hope Flying Wild Hog is working on a sequel.

Chapel Collins
This is a tie between The Witcher 3: Wild Hunt and Star Wars: The Old Republic. I have troubled histories with both The Witcher and SWTOR. I had been trying to get into the Witcher 3 ever since its release date last year, but for whatever reason, I just couldn't. I would get bored or distracted and inevitably move on to something else. But it finally sunk its claws into me this year, and I marathoned the rest of the game and most of its DLC. It's almost the exact same story with SWTOR. I've played that game off and on for years, but this time I was playing with a buddy and I got totally sucked in. It probably has as much to do with The Force Awakens and Rogue One films as anything else, but I had Star Wars fever this year and SWTOR hit the spot.

Nathan Carter
Dragon Age: Inquisition - I managed to pick up the game of the year edition of Dragon Age: Inquisition on PSN for like $15. Man, have I been missing out. I wasn't really a fan of the first two Dragon Age games but I am in love with Inquisition. I feel like everything came together beautifully for this game. The characters are all fantastic, the combat is great and the story is phenomenal from what I have played so far. Yeah, I agree there are an overabundance of fetch quests but at least they are still fun. Plus you get to sit on a throne and decide whether or not to execute prisoners. Amazing stuff. The bigger series that I played, however, was the Phoenix Wright series. I played through all five of the previous games in the series right before Spirit of Justice came out. I am now in love. This is some of the best storytelling, some of the best characters, and some of the best character development I have ever seen—not just in a visual novel, but in gaming, period. Maya Fey is now probably one of my favorite video game characters of all time.

Russell Archery
If it has the word "Borderlands" in the title, I probably played it this year. I keep telling friends that I normally have to be in a certain mood to play a certain game. With 321 games in my Steam Library right now, and only having finished fewer than 20 of those, plus with all of the physical games I own across three decades of gaming systems, I have no shortage of games to play. However, no matter what kind of mood I'm in, if I can't think of anything else to play, I plop in a few more hours of Borderlands. In 2016 I finally completed Digistruct Peak solo with Maya (I know, I know, a lot of people have probably done that) and unlocked OP1 in Borderlands 2, though I'm still trying to learn how to take down the raid bosses solo outside of Terramorphus. Borderlands 2 is my go-to game when I just need to unwind. I am eagerly waiting for Borderlands 3.

Aidan Kelly
The Elder Scrolls V: Skyrim - I played a lot of Skyrim last year. Every few years we all return to an Elder Scroll game for "quick" 200+ hour playthrough. Skyrim has always had a special place in my heart since it was the first Elder Scrolls game I've ever played. Much of the credit goes to the fantastic modders and mod teams working in Steam Workshop, Nexus Mods, and Mod DB who manage to deliver top quality mods with little negative impact to the game and a huge positive impact on the community. The mods that are available for Skyrim have ensured that I will never, ever play vanilla Skyrim again. Why would I? Last time I loaded up modded Skyrim I was faced with fighting Havel, Ornstein, or Artorias somewhere East of Windhelm. It was cool, though. Master Chief backed me up.

Matt Mirkovich
Final Fantasy XIV - This one continues to eat up my time. This year I put a ton of work into learning the Astrologian class. The patches continued to improve the raid content as we got closer to the end of the year, and the newest expansion, Stormblood, looks like it's going to be an amazing addition. There's still a lot of jobs I could work on going into 2017, so when we revisit this at the start of 2018, you'll probably still find this game in that list as well.

Undertale - At the start of the year I started playing Undertale because I had heard so many good things about it. And during my entire trip to Japan and China, I had this game open and running. I fell in love with the characters, the story, the soundtrack, and especially those endings. I just could not put this game down until got that "best" ending.

Kinsey Danzis
Rise of the Tomb Raider - I always found myself coming back to two games in particular, but out of the two, I enjoyed Rise of the Tomb Raider more. I will literally follow Lara Croft to an early grave, so it wasn't a surprise to anybody when I decided to make a completionist save and replay the entire game earlier last year. It's really a gorgeous game; it has crisp and realistic graphics, hypnotizing music, more tombs (thank God), and just the right balance of reality and the supernatural. If I wasn't a devoted fan of the franchise, this game would have been my gateway. As it is, I can't wait to see Lara's next encounter with Trinity.

Rob Larkin
Destiny - No question on this one, it's Destiny by a long shot. As a matter of fact, I'd wager I played more Destiny this year than all other games combined. By the time I began my journey in the game there was a load of content—from the vanilla missions to The Taken King—already waiting for me. Only to be followed by a game-changing April update, a few regular holiday and multiplayer events, and the full-featured Rise of Iron expansion in the Fall. Add to this my joining a dynamic clan of like-minded people that played daily and Destiny ended up consuming my 2016. Here we are in 2017 and, truth be told, Destiny was still the first game I played when returning home from the holidays.

Randy Kalista
Mad Max - Sometimes I need a driving game, but I burnout on the automotive minutiae. Sometimes I need a beat ‘em up, but I burnout on the beating ‘em up. But if you take those two things and mash them up with a sandy, dusty, dirty open world, well, now you’ve given me a happy place to teeter-totter between the two. Mad Max’s cast of outrageous characters doesn’t get old. This is one time I’m bummed that I listened to the critics in 2015 and thought this would just be a middle-of-the-road experience. User reviews—which rated Mad Max well and above the critics—weren’t being loud for the sake of being loud. They were shining light on a standout open-world entry in an admittedly well-worn genre. Took me a year to push past the sub-70 Metacritic and, in 2016, to finally get at one of 2015’s most gorgeously desolate and face-pounding action games.

Chuck Husemann
MechWarrior Online - MWO continued to be the main game I played during the year. Piranha has done a solid job of releasing new content and game modes which kept the game fresh for me. I will admit to spending a bit more than I would have liked to on the game, but I don't regret any of the purchases as I've gotten more enjoyment out of this free-to-play title than I have from most $60 games. The cycle of creating and modifying a mech, taking it to battle, and then tweaking it based on the results of the battle is something that works for me on a lot of levels.