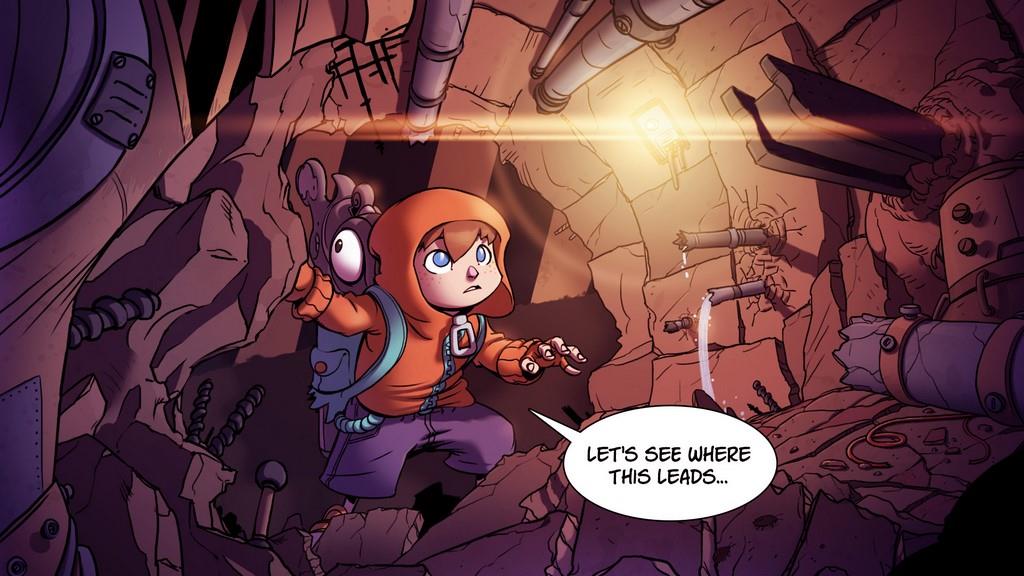 Over all of the years I’ve played video games, my favorite genre has always been platformers.  Growing up on the classics such as Super Mario Bros. and Mega Man, I’m always drawn to new games in the genre when I see adds or videos for them.  Rise and Shine is a game I’ve seen commercials for quite a bit while watching Adult Swim, which is fitting seeing as that’s who made the game.  Being someone who’s into side-scrolling platformers I was eager to check it out.  The more I played it though, the more I started having second thoughts.

The game begins with the world of Gamearth being invaded by the Space Grunts from the planet Nexgen and a kid named Rise finds himself in the middle of the war.  A legendary warrior gives Rise a gun called Shine which will give him infinite respawns should he die.  Before he dies, the legendary warrior tells you to take Shine to the king.  That’s pretty much the gist of the plot.  More things to open up along the way but the main goal is pretty cut and dry.  The game pretty much tells you how to play as you go along and collect items but there is a tutorial option that tells you the controls.  The game can be played with either a controller or a keyboard and mouse, but this is probably the first platformer that I feel more comfortable using a keyboard and mouse.

While Rise and Shine is an action-platformer, it utilizes somewhat a twin-stick shooting style that is hard to get the hang of on a controller.  If using a controller you use the right analog stick to aim Shine and the right trigger to fire.  Normally that’s fine, but the enemies tend to be kind of small at times, not to mention constantly moving and firing at you and since you can either shoot enemy projectiles out of the sky or move and dodge them altogether, it can make for some pretty tricky aiming.  After the first couple of scenes where I died constantly every few seconds, I switched over to a keyboard and mouse and for me it worked a lot better.  Holding down the right mouse button aims while the left mouse button fires, and I tend to get a bit more precise aiming with the mouse, but it can still be hard to hit certain enemies.

As you progress through the game you’ll come across different power-ups to use with Shine such as electric bullets to use against various mechanical objects or guided bullets that you can control within a certain range.  These can be used to solve puzzles, some easier than others.  With the guided bullets, there’s one puzzle early on that you have to guild the bullet through some narrow passages and hitting anything will force you to try again.  If the bullet ever goes outside of the circles you have to keep it in, it harmlessly falls to the ground.  It’s an interesting idea for an action platformer and can also be used to hit enemies that might be harder to hit due to their location or other obstacles in the way. 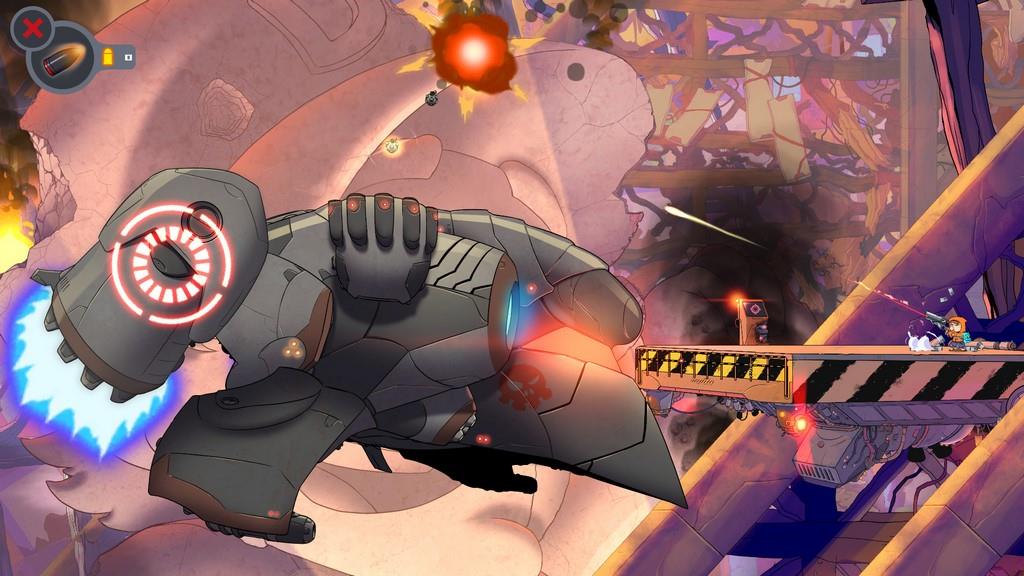 Speaking of using Shine, the combat in this game kind of feels hit or miss at times.  As stated, the way combat works is by aiming first with the right mouse button or right analog stick, depending on your control method, then firing a shot.  It’s nice that you get that 360 degree range, but it can be hard to hit some of the smaller enemies.  On top of that, there are times where there are so many enemies coming at you that you’re bound to take damage.  Rise can hide behind rocks and such to take cover and then pop up to fire at enemies, but that cover can be destroyed by enemy fire and depending on what enemies you’re facing that might not take very long, so you don’t have much time to form a strategy about which enemies to focus on first.

There’s one thing though that kind of gives me an overall mixed reaction with Rise & Shine: the difficulty.  The first few scenes aren’t all that bad as they get you used to the game and you find your first couple of power-ups so you can get the hang of switching bullet types or properties.  However, that’s where the difficulty spikes up a bit.  Several scenes in I hit a proverbial brick wall as I kept getting majorly overwhelmed by enemies.  Rise is able to take cover behind the occasional small rock but as stated that can be destroyed leaving you defenseless.  Now in this case I’ll admit I was a bit too stubborn on what to focus on first and once I corrected that, I was able to survive that section of the stage.  Rise’s health does slowly fill back up over time if he’s not taking damage, but in a huge firefight that’s probably not going to happen unless you still have some cover left to duck behind.  Add in that you might have to constantly switch back and forth between bullet types and properties, meaning that depending on your control setup you might have to almost stop moving entirely, and it just complicates matters even more. 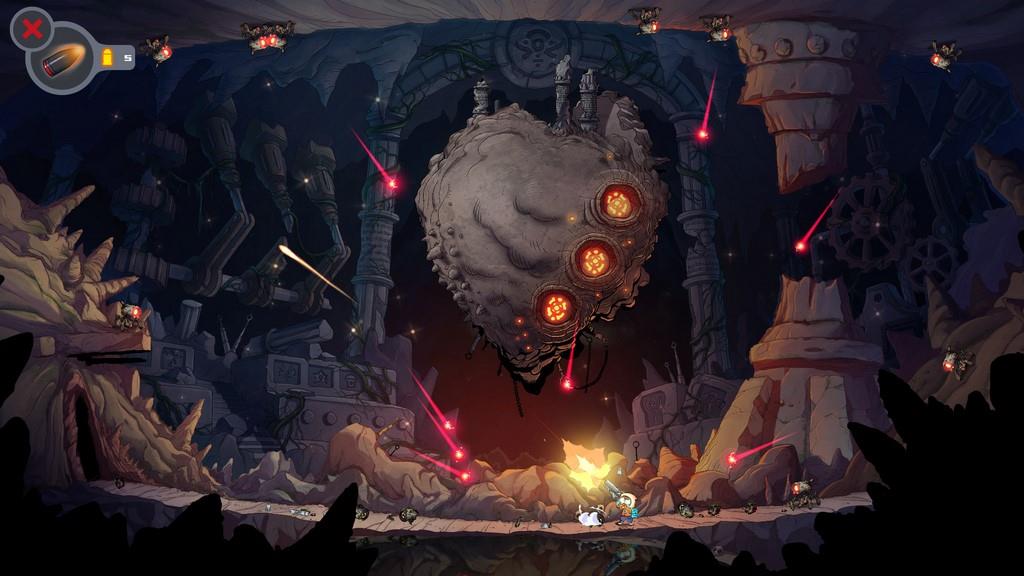 Then you have a couple of stages where the aforementioned issues kind of compound themselves.  In one stage you have to jump start the heart of a colossus by shooting small enemies to charge it up before swapping bullet types to finish that part of the fight.  However, the screen is pulled back some which can make it kind of hard to see where you’re at, plus it makes the enemies harder to see.  You also have to keep track of where the enemies’ projectiles are going towards while making sure you’re aiming at the right spots to take them down and it just really complicates things sometimes.  A couple of stages later you have almost the exact opposite; you’re in a flying ship during a shoot-em-up segment and the ship is a pretty big target.

Overall, Rise & Shine is a good game, just difficult.  The art style looks great and there are a lot of video game references seen throughout the game from games such as Duck Hunt, Final Fight, and Ghost & Goblins just to name a few.  While I’m terrible at aiming Shine I did get used to it after a while.  My biggest issue though is the difficulty combined with how short the game is.  While it did take me a few hours, namely because I can be pretty stubborn on how to strategize for how to survive a firefight, I’ve heard of people clearing the game in around two hours.  The game only has just over a dozen stages and once you know what you’re doing it’s not too difficult.  However, the difficulty does spike part way in so it’s almost like they compensated for a short game by spiking the difficulty early on.  Still, it’s not a bad platformer and if you’re up for a challenge, Rise & Shine will gladly give you one.

Rise & Shine is a good action-platformer though its main shortcoming is how short the game can be.  Once you get the hang of things the game can be finished in a few hours, but if you’re looking for a challenge the game’s difficulty spikes about a third of the way in and it just gets harder from there.  If you're up for a challenge, this is one to check out.