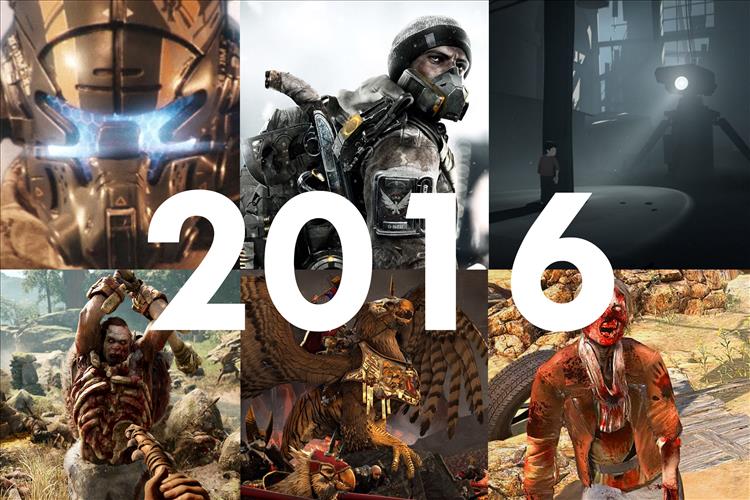 Looking Back at 2016: The biggest surprises of the year

Today we discuss the biggest surprises of the year. These games either weren't on our radar or turned out much better than we expected.

John Yan
Arizona Sunshine — Oh no, not another wave shooter for the HTC Vive, I thought. But then the game was delayed. When it did come out, however, it blew me away. Vertigo Games turned a zombie wave shooter into a zombie survival adventure game that surprises the hell out of me. Yes, the developers tried to do a bad thing with locking part of the game if you didn’t have a certain CPU. But Vertigo fixed the issue quickly, and I hope they and others learn a lesson about trying to hardware lock parts of a game. The game itself, though, is a blast to play. Its unforgiving aiming system forces me me to improve my targeting skills if I want to survive. Playing co-op, while buggy, is a great time. And the horde mode, with up to four people, is an amazing experience, when it works.

Sean Colleli
Far Cry Primal — Ubisoft has become the poster child for lazy sandbox games and, in a lot of ways, Far Cry Primal is the perfect example. It copies many of the gameplay elements, and even whole sections of the map, from Far Cry 4, so I fully expected Primal to be another franchise churn-out. Instead, Primal is an excellent game in its own right. Ubisoft puts far more thought and care into this spinoff than I ever expected. The result is a game that’s just as dear to me as the riotous Far Cry 3: Blood Dragon. It also helps that I’m an amateur anthropology nerd and Far Cry Primal scratches that itch perfectly.

For starters, Ubisoft hired ancient linguistic experts to work back known archaic languages to reconstruct three dialects of Proto-Indo-European. That makes history nerd Sean very happy. But it also works remarkably well for the game, imparting a culture, depth, and dignity to early humans that you don’t usually see in fiction. I think it’s pretty cool that one of the caveman cultures worships the Venus of Willendorf. Nice attention to detail there. The story is simplistic but appropriate: you must reunite your scattered, starving tribe before the other tribes kill/eat/sacrifice you, and, in the process, there’s a lot of stark, but not distasteful, kill-or-be-killed violence. Nobody ever said Mesolithic living was easy. Thankfully this gets Far Cry away from the increasingly political, convoluted, and somewhat preachy conflicts of the previous games. I don’t mind stories with a lot of gray morality, but a Stone Age break is refreshing.

The various changes to gameplay work very well, too. the switch from guns and jeeps to arrows and mammoths fits the series well, complementing my already stealth-heavy approach to any Far Cry game. The focus on nature as a persistent, terrifying, and ultimately empowering force—once you learn to tame the biggest animals—made me feel appropriately primitive and closer to Mother Earth. All these changes make for a very different-feeling game, to the point that I don’t mind so much that Primal's Takkar has a caveman grappling hook that is functionally identical to Far Cry 4's Ajay Ghale. I bought Primal for full price thinking I would regret it, but now I’m hoping Ubisoft gives us a sequel.

Chapel Collins
The Division — I know a lot of people didn't dig it, but I had a lot of fun with The Division. I was 100 percent sure that it was going to be terrible. Based on a lot of what I read throughout the year, a lot of people think it was. And maybe it is. It certainly has its issues. I usually don't even disagree with people when I read their complaints, but it struck a chord with me and I really enjoyed my time with it.

Nathan Carter
Hitman — Hitman goes episodic and it's amazing. I loved it so much I gave Season One a 9.5. It goes back to what made the original Hitman games so great, plus it is insanely replayable. You can play through a level 100 times and it will be different every single time. Combine that with all of the challenges, opportunities, and online contracts and you can sink hundreds of hours into this game and it will still feel fresh.

Russell Archery
Mighty No. 9 — For me, this one will be a little controversial, but I'd have to say Mighty No. 9. Wait! Before you start pelting me with rotten fruit, let me explain. Mighty No. 9 had a bit of a rocky start with the release date getting pushed back about a year-and-a-half from the original projection. There were problems with backers not getting their codes on launch day (be it incorrect codes, codes for the wrong platform, or just not getting them at all), plus we're still waiting for info about the physical rewards. Needless to say, the launch was a disaster. The game received "meh" scores overall with a 52 average on Metacritic for the PC version. Honestly, though, I enjoyed it. The game's not perfect, but I think it's a lot better than people say it is. So why is this my "Biggest Surprise of 2016"? I think it's a combination of things between just how bad the launch was, how bad a lot of people say it turned out, and how much I did end up enjoying it. Granted it's not for everyone; I'm not going to sit here and say that it's better than Mega Man. Honestly though, considering how much people constantly rag on it, I still enjoy Mighty No. 9.

Aidan Kelly
Total War: Warhammer — The guys at Creative Assembly figured it out. Let's forget Atilla ever happened, and imagine that Rome II was as good as we had hoped. All that aside, Total War: Warhammer provides a refreshing perspective into grand strategy. Multiple factions of different races, magic powers, magic beasts, and a phenomenally large universe from which to draw upon for lore and history. The battles are so smooth and the fighting so brutal. Cavalry charges can visibly bend a line of infantry. Trolls and giants can obliterate the ranks in moments. The campaign has been improved sevenfold. Loading times between turns has been minimized and the map itself is more compact, but takes longer to traverse. By this I mean there is less of the map to traverse, but the parts you do cross are varied and important. Mountains, deserts, plague lands, rivers, swamps, and subterranean highways add to the complexity that is Total War: Warhammer.

Matt Mirkovich
Overwatch — Well, I couldn't use Overwatch for best game, but I am using it for Biggest Surprise of 2016. I actually went in totally blind, with no hype, and now I'm close to completing my first 100 levels (lap? prestige? What term are we using for this game?). The competitive seasons have only gotten better with the character buffs, nerfs, and patches, and I am having a blast with the latest iterations of D.Va and Symmetra. And we've already received two new heroes in Anna and Sombra, along with new maps, so I feel like my money has been well-spent on the base game. Those loot boxes, though...not so much.

Also, indie developers in general surprised me last year. There were a lot of great games released in 2016 by individuals and small teams. It's a shame that a lot of them were lost in the collective flood that Steam experienced this past year.

Kinsey Danzis
Hitman — I wasn't sure about the episodic style of Hitman, and I know I wasn't the only one. However, it had definitely eased those doubts as early as the second or third episode. Pair that with the complex AI, open-level gameplay, and the fact that you can hit people in the head with coconuts, and the game really got me hyped for the start of Season 2. And that's not even touching on Santa.

Rob Larkin
Total War: Warhammer — I'm going to go ahead and put Total War: Warhammer in this spot. If only because there have been so many Total War games, most of them good, and so many Warhammer games, most of them less so, but this was just the prefect marriage of the two franchises. It makes so much sense when you think about it. but I wasn't thinking when I jumped in. And really, the union is spot on. So I was pleasantly surprised by how well it worked.

Randy Kalista
Inside — I was surprised by Inside. I mean continuously, jaw-droppingly surprised. It kept me off balance and on on my toes for every single one of its deliberate, cinematic, orchestrated hours. Why is this bumbling kid driven inexplicably into some kind of black box project? To save himself? To save someone else? Is he cutting cords, or is he a marionette? The questions linger and are presented with the pace and timing of an expert indie film director. Inside’s innocuous title holds double and triple meanings, too: Getting inside the dark government facility, getting inside the heads of the scientists and brain dead experiments, and getting inside the last, barely recognizable blob of humanity held captive within. That last one won’t even fully make sense until you play through the holy-hell twist of a final act.

Charles Husemann
Titanfall 2 — I was a bit wary that Titanfall 2's single-player campaign was going to be some weird multiplayer mash-up, like what the DICE team did with earlier Battlefield games. Instead we got one of the best first-person shooter single-player campaigns in recent memory. Sure it was a bit short, but there was no filler, and it featured one of the best time traveling levels since Singularity hit in 2010.

Inside — It's hard to tell where an art studio will go after having a lot of success with their debut. Sometimes they get it right—but more often they don't—and the results are disastrous. Playdead actually did the rarer third option which was to release something that was even better than the original game. Limbo was great, but Inside took it to another level, especially with the what-the-hell-just-happened third act. One of the great things about Inside was that it helped anchor Playdead's worldview and style of making games.

What games surprised you in 2016? Leave us your thoughts in the comments.