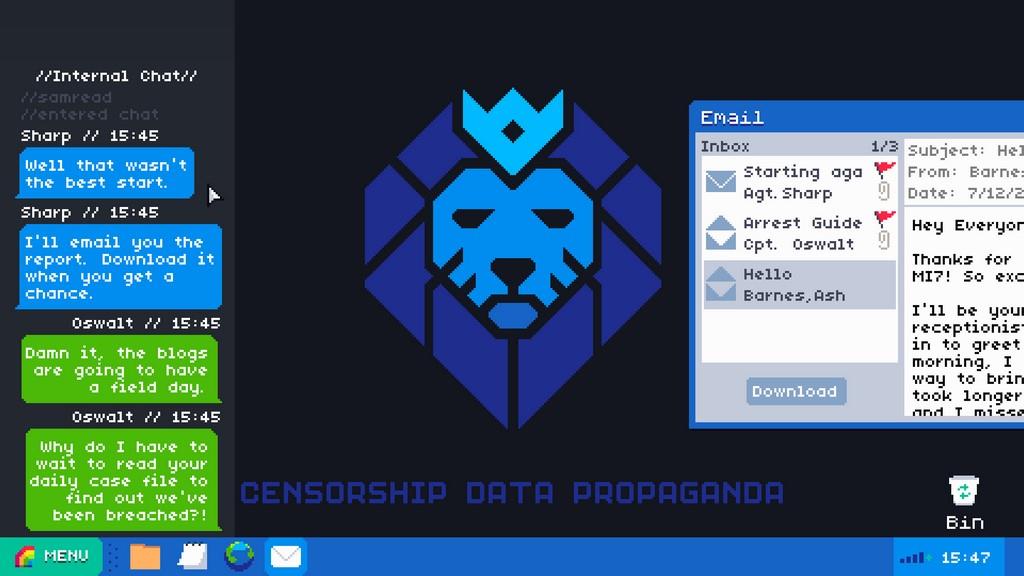 I'm going to ask you to trust me on this, okay? Just hold my hand and trust me as I say something that by all rights should be completely false: you're going to get a blue screen of death in Mainlining, and it's going to be a good thing. In fact, thanks to developer Rebelephant and Sam Read, it's going to lead to a hidden gem of an indie gaming experience.

No, I'm not losing my mind. The game starts out with your entire desktop crashing—but you see, it's not your desktop. It's the simulated desktop of a guy named Oswalt, an agent of MI7 who's tasked with bringing a network of cyber-criminals to justice. You assume the role of this agent, navigating his desktop (and even others, as the game progresses) in order to dig up buried identities and the evidence needed to send them to trial. You have a varied toolbox at your disposal that expands as you play—including a comprehensive catalog of citizens, a phone tracker, and a document locking/unlocking system—but the most important of these by far is Mainline, MI7's hacking software. If you ever had a childhood dream of typing away at a computer, inputting hacking codes and commands that appear in glowing green text against a black background, then I have some good news for you: that's exactly what you get with Mainline. And that's just one aspect of the game. 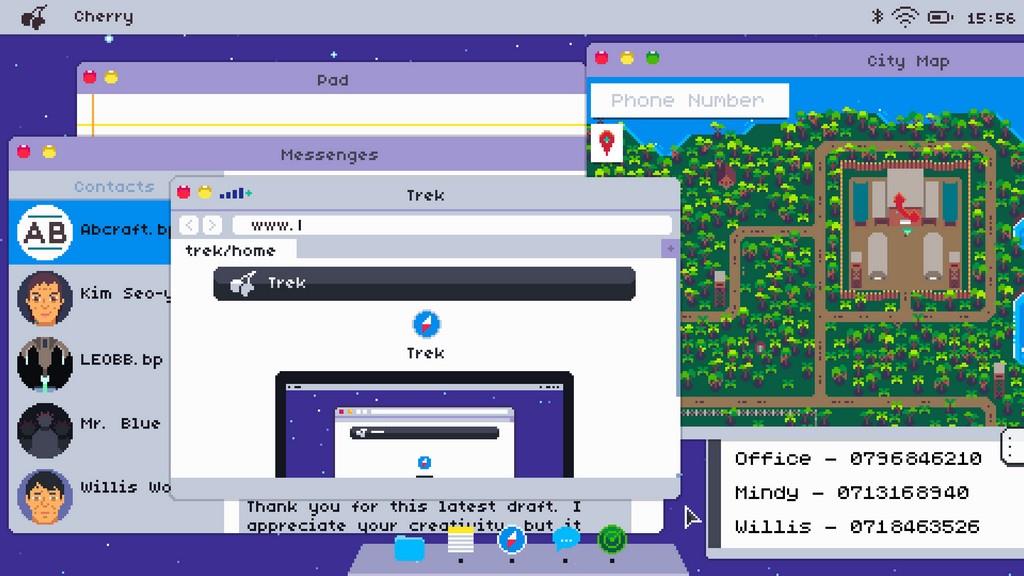 As a heads-up: Mainlining is not yet complete. The copy of the game I played lacks the final few chapters—which Rebelephant plans to release a week or so after launch—so some of my comments here might be a tad off the mark once we have access to the full content. I'm talking specifically about the morality of the game (because, at the end of the day, you're basically working for a censorship agency, and that's definitely a hot-button subject in many areas of the world today) but I'll dig more into that later.

Morality aside, I had a great deal of fun with this game, because I definitely had that aforementioned childhood dream of hacking for justice. One of the great things about this game is its immersion factor, which is more important than one might think for a point-and-click game that literally takes place on a desktop computer. Namely, there's no quest log. You get your objectives from a constantly updating chat between yourself (Oswalt) and your colleagues (mainly someone named Sharp, but occasionally someone else as well), and they're rarely stated outright. You know you have to dig through files to find something incriminating, and you're given initial guidelines (that, by the way, are very realistic for a professional chat system), but other than that you're largely left to your own devices. Your exploration of hard drives and IP addresses is your own decision—which could be a blessing or a curse, depending on your point of view. Personally, I think it's great; agency hackers in real life don't have someone holding their hand and leading them to the goal. 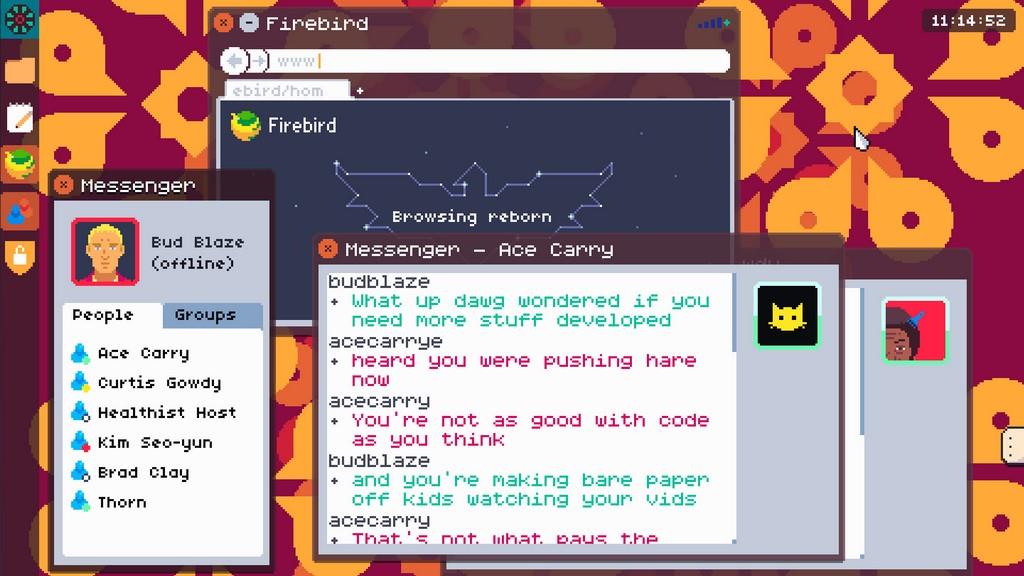 I will admit, though, that there were times where I wish someone would have held my hand, and that's because of the specificity needed for an arrest attempt. To catch a cyber criminal, you need three things: their name, their location at the time of the arrest, and evidence. Easy enough, right? Well, not always. There was one perp that drove me up the ever-loving wall. You see, you're only allowed to submit one piece of evidence per arrest, which sucks when you know you have a solid case across, like, three other pieces of evidence. Even worse, there isn't a pool of incriminating documents that you can pull from; there's only one that works per perp, so sometimes locating it can be an ordeal. I knew it was this guy; the game pretty much tells you. But every time I tried to arrest him, the game told me I was wrong. It took a solid couple of hours before I accurately matched up the guy's location to the right piece of evidence—which, to be fair, was due in part to my own idiocy, but it's definitely frustrating when you have an impenetrable case against someone and can't use it because it's spread across documents. I found myself muttering "Well, if it were in real life..." more than once.

Back to immersion, though. I know I mentioned the whole objective/chat thing (which also has an element of humor, just so you know), but there are also a bunch of little details that make it seem way more realistic. For instance, tutorials are disguised as various elements of Oswalt's desktop, such as documents and setup menus. Your email inbox (because yes, you have a simulated email) not only shows case files necessary for gameplay, but also purely immersive elements such as an award announcement, IT emails, and a very long chain of flirty emails from your new receptionist. You can dig up documents that are absolutely not necessary for gameplay, but may very well be on someone's computer just for the heck of it (including but not limited to ridiculous fanfiction and terrible screenplay ideas). It's nowhere near as comprehensive as it would be on an actual computer, but come on—that's near impossible to achieve in a game, especially if you're someone like me who has roughly a thousand documents in my drive. The level of immersion is just right for a game like this, because it doesn't bury your incriminating documents under a mountain of useless data but also doesn't make the experience boring and simple. 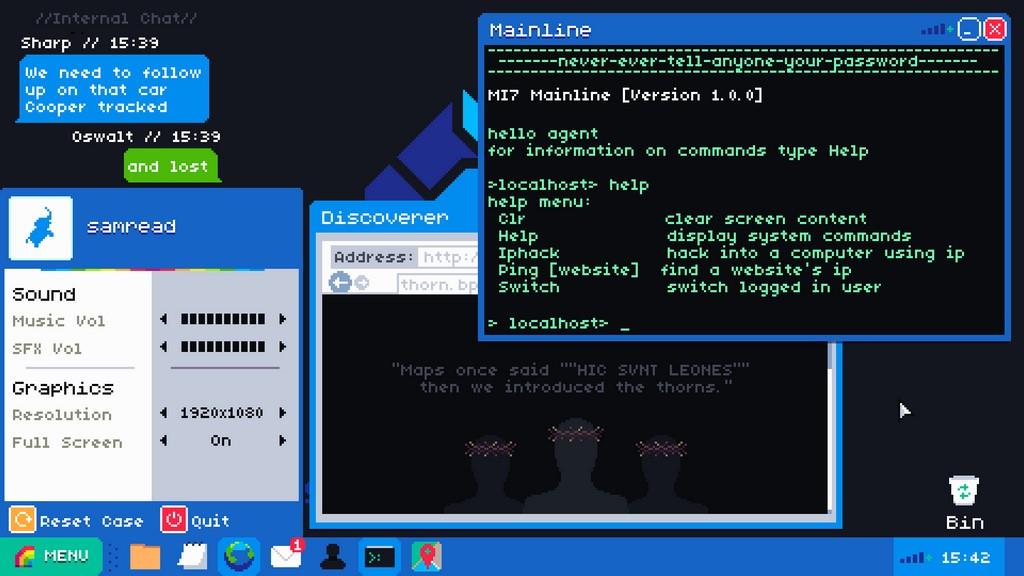 At the end of the day, you're a hacker trying to arrest people by rifling through their digital documents without a warrant or anything, and that's where the aforementioned morality issue comes in. Again, I didn't have access to the entirety of the game, so there could be some profound message about privacy and the importance of online security acts being made in moderation in the final few chapters, but right now it's a little gray. Your desktop background literally says "Censorship Data Propaganda" which, regardless of your personal politics, is definitely relevant to certain current events. Even a newspaper in the game (because each arrest, failed or successful, is marked with a small news article) gets critical of the reach of MI7. However, I can't count this as an element of non-immersion, because it's still relevant to the premise of the game; the fact that an element of the game itself drew attention to the questionable methods of MI7 indicates that Rebelephant is aware of the morality issue here. Just bear this in mind: if you're expecting a game where you are 100% undoubtedly the hero, you probably won't find what you're looking for with this. Take that with a grain of salt, though.

Now, I hate for my last point to be a negative one, especially considering how much I loved playing this game, but there were a couple glaring issues that I encountered (which, in all likelihood, will probably be patched soon). The first and most glaring one was something that cost me a couple of hours of gameplay before I realized what was happening; there is no save option, nor does the game autosave at checkpoints. Whether or not this is an intentional function, I haven't yet heard, but it's massively inconvenient to have to play the entire game in one sitting—and it's even worse when you're forced to restart the game entirely due to that second glaring issue I mentioned. When I alt-tabbed (mainly because there were a couple of important emails I was waiting on that day), I reentered the game only to be met with significant display glitches. Jagged white flashes popped up here and here on my screen, sometimes bearing distorted snippets of other elements of the game, and they wouldn't go away until I restarted the game (and lost all my progress). I also encountered a few issues where the game straight up crashed, mainly due to me closing windows in-game and attempting to re-open them (though if you just minimize the applicable windows, you can avoid this bug). However, Rebelephant is aware of these issues, so I doubt they'll go ignored.

Even considering the bugs, I've never had so much fun with a point and click game before. The controls are intuitive, the background music is accurate yet minimal enough to not be a distraction, and it all comes together to draw you into a truly immersive experience. And yes, I'll admit that I felt super cool typing commands into the Mainline software and piecing everything together. I would recommend this game to anybody, and I can't wait for Rebelephant to release the rest of the content.

Mainlining kills two birds with one stone, fulfilling a childhood fantasy and just plain being a great game at the same time. If you're looking for a unique sort of puzzle/mystery game, definitely give this a try; it's obvious that Sam Read and Rebelephant have worked hard on this, and the result is a truly enjoyable game that's fun for fans of many game genres. Well worth the money.