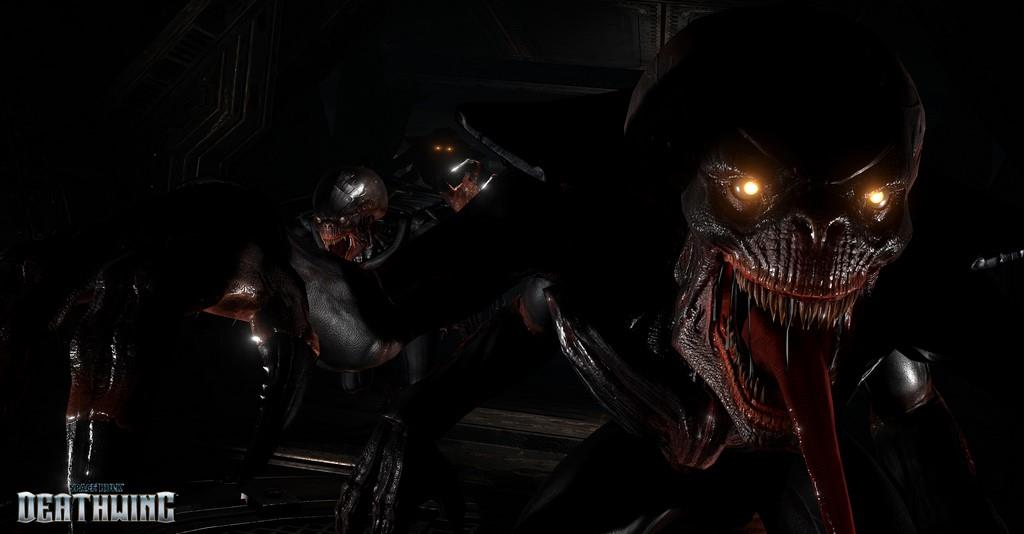 In Space Hulk: Deathwing we play as a Librarian enlisted in the Dark Angels, a company of Space Marines. Players will use a mix of violent weapons such as the Bolter, Flamer and the Thunder Hammer. What sets Librarians apart from their brethren is their ability to tap into and channel Immaterium. The power of the Warp enables Librarians to use psychic abilities to purge the darkness of xeno filth. Hellfire is my favourite psychic ability. It does exactly what it says on the tin. Librarians can also Warp to an armoury back at headquarters. Here your brethren help to heal and re-equip you for the fight ahead.

During combat you’re in charge of a small but elite squad of Space Marines. You can equip them as you see fit, just make sure to think of what environments you’ll be fighting in and take a balanced load out. Or don’t. You’re a Space Marine, a genetically modified super soldier. I spent the majority of combat using melee weapons. There is a satisfying crunch whenever you hit things. Really satisfying. Early in the game, before the cannon fodder becomes too tense, most melee weapons will produce a horrific spurt of xeno blood. Besides using standard Space marine weaponry, you can find relic weapons scattered throughout the levels. These relics, such as the Honour of Caliban, the Sceptre of Power and the Blades of Silence bring honour to the Empire with every kill. Once found, the relics can be equipped from your personal armoury back at HQ. As you progress you will unlock new psychic abilities, find new relics and experience some great example of Warhammer 40K lore

To help in your endeavours, your armoury is outfitted to with a considerable repertoire. Your squad can be equipped with close, mid and long range weapons to cover whatever environments you’ll be engaged in. My favourite early game weapon, while the ads are still relatively squishy, was the Heavy Flamer. A burst of flame spewed forth by the Heavy Flamer dominates squishy ads. Auto cannons chew groups of enemies to shrouds of mist and the Force Sword can block and even parry enemy attacks. You’re not invincible though. As the game progresses you’ll meet different strains of Tyranids. The Scythe Strain and Hybrids with rocket launchers are death incarnate. The rocket launcher troops especially. At least with the Scythe xenos you don’t have to worry about them until you actually meet them up close. If there weren’t other ads to deal with, one could be more wary but Stalker strains will appear between the flashes of your gun muzzle as they close in to do damage. 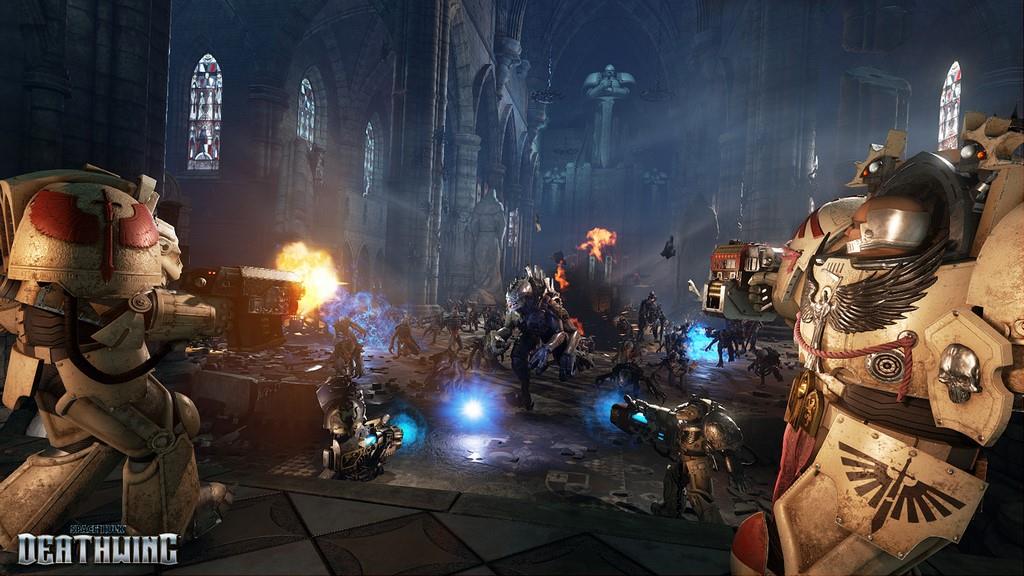 In true Warhammer fashion the game is laced with scenes of brutal gore, inhuman scientific experiments and blood streaked corridors. The level design is a credit to the game. It does a fantastic job at strengthening the Warhammer 40K atmosphere. To purge the xeno filth you and the guys, elite heavily armoured super soldiers, must merrily navigate the intricate paths of the space hulk. The space hulk is grouping of scuttled space ships collected and grouped by The Empire. You’ll be fighting on more than one ship. With a collection of ships this expansive there are a number of sectors, levels and side paths to choose from. I found it very tedious to traverse the corridors of the ships. Sure, there were bursts of glorious Cathedral design and pulsing engine bays but most of the dirty work is done in the corridors. Endless miles of corridors. A Space Marine is quite large, and doesn’t move very quickly. Sprinting should be used over very short distances and it expires quickly. You don’t have to go it alone though. Don’t forget you’re in a squad, and should make use of them when the opportunity arises. Your brethren Space Marines can unlock, hack and lock doors to slow down or funnel ads into kill zones. If things get rough and you need to heal, you can request medicinal attention from a Brother via the lovely order menu. Easy and intuitive, the order menu makes it second nature to put the foot down and dish out some orders. 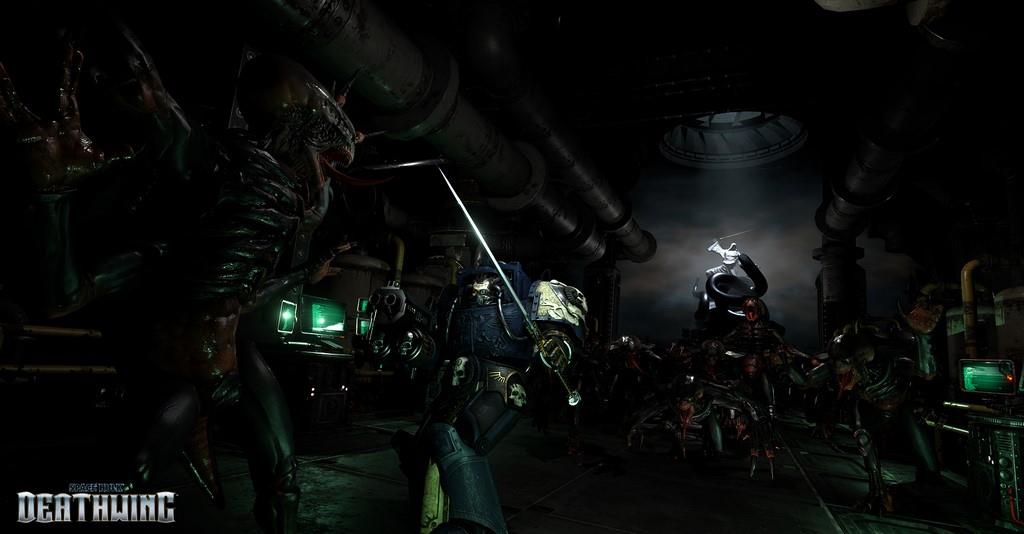 I had a feverous hope that Space Hulk Deathwing would deliver unto me a feast of brutal and immersive gameplay. I really did try to like this game, I wanted to like this game but the narrative wouldn’t let me. The biggest problem with Space Hulk Deathwing is the lack of a story worth fighting for. Orders are delivered via your Terminator suits HUD but most significant things that happen in the game are told to you from these comm channels, and not shown. The gothic majesty and violent battles don’t create any big moments during the solo missions. Without a way to efficiently deliver the story, and no big moments to set it off the campaign leaves no memorable impressions. The multiplayer, where you can squad up with three others to form a team of four does however. I had much more fun playing the co-op campaign than I did the solo campaign. Laying waste to an endless horde of xenos through the gun muzzle flashes and shouts of camaraderie between you and the gang does, deliver the moments. Really, I don’t recommend the solo campaign, if you’re to play this game it should only ever by the co-op campaign. Not only does it spark the potential big moments, it makes going from waypoint to waypoint endurable. I’d also keep the Warhammer 40K Wiki close by. From the get go you’re bombarded with 40K terminology. Immaterium, the Warp, Librarians, Chapters and the Dark Angels. The Dark Angles are warrior monks whom were separated from the Empire centuries ago. The Fallen, another term for Dark Angels, are the focus of Deathwing and its Terminator troops of super soldiers. As a member of Deathwing, you’re privy to some of the secrets detailing the existence, cause and nature of Dark Angels.

The PVP multiplayer has a slow pace, and can be quiet buggy. It butchered the whelping knot of hope ferreted away in my sub conscious. Every objective was an insane struggle. Objectives send you and the squad to opposite sides of whatever sector of the ship you’re in and back to the starting point. The boredom grows and grows until every corridor feels claustrophobic and familiar. I mean it. Expect to check the map quite frequently, and to navigate pointless obstacles on the way to the objective. You can spend most of your time checking the map to find a way around doorways and corridors blocked by debris.

When you eventually do get to purge some xenos, don’t expect too much difficulty at first. Instead be prepared for waves and waves of cannon fodder. The enemy AI is stupid and unimaginative. The enemy rarely uses cover and unless you ignore the big blinking Alien-esque radar on the bottom of the screen you shouldn’t be ambushed on your travels. Saying that, later in the game said cannon fodder like the Hybrids and Warriors can whittle your health away while you deal with the bigger ads. A Broodlord, though rare, is a big problem. Couple a raging Corporaptor Primus, Broodlords, with Hybrid Rocker Launcher minions and you’ve got a fire fight…that you just don’t really care about. That’s the problem with Deathwing. It’s hard to care about any of it. The amount of time wasted wondering corridors and navigating pointless player obstacles is too time consuming. I dare say it was a grind.

While the first fleeting hours of Deathwing was enjoyable, the proceeding remainder of the game is dull, anti-climatic and uninspiring. If you've got a group of friends ready to squad up in honour of The Empire than great. At least you won't be driven mad by the endless traversing of dim light corridors. Keep the Wiki open and at the ready, for any incoming comms will be difficult to chew on if you're listening as a newcomer to the series. The Wiki is well worth a read, even if you don't plan on playing the game. The lore is savoury dand rich like a thick gravy. The general gameplay is pretty crispy though, and often burnt at the edges.