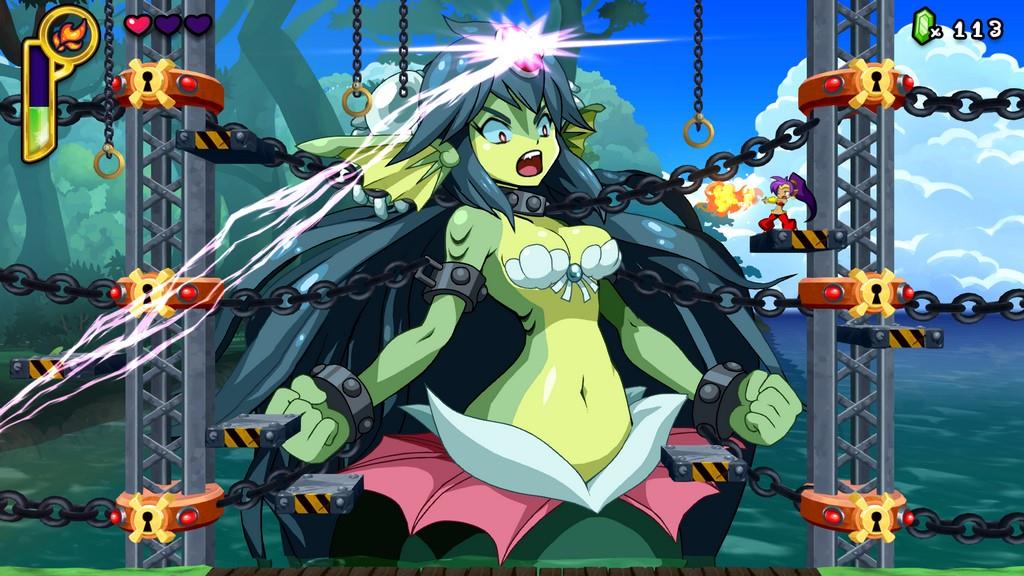 I’m a sucker for backing Kickstarters. This year has been kind of unpredictable with releases though. From the colossal disappointment that was Mighty No. 9, to Frequency’s anemic release, I’ve had some reservations about backing any more projects. Thankfully there have been some spots of light in the darkness. The previews I’ve been receiving on Cosmic Star Heroine are promising, and then there’s Shantae: Half Genie Hero, from the team at Wayforward, home to some of the most creative people in the industry, and the love for their genie mascot shows in their first ever high definition release.

Shantae’s been keeping an eye on Sequin Land for some time now, with moderate success. Sure for every time she gets rid of Risky Boots, there’s a problem caused by Rotty Tops, or one of the various Barons who are out to cause trouble. Suffice to say, there’s always something that’s harassing Scuttle Town, and the mayor’s had enough. So he’s brought a new genie in to help protect the town. Meanwhile Shantae’s running errands for her uncle, and actually doing something about all the ne'er do wells that have designs on the town. Literally everyone that Shantae has dealt with in the past makes an appearance in Half Genie Hero across the game’s six stages.

This game is a little bit on the short side, and you’ll be replaying a lot of areas as you complete quests to help Uncle Mimic create his device that will assist Shantae in protecting Scuttle Town. There’s plenty to explore ,though, and the stages are dense with content. Initial passes through the levels will feel pretty linear, but once you start unlocking transformations, you’ll see that these levels are packed with secrets and items to find. The first playthrough took me a little more than six hours, which is a decent timetable for the price, and once you complete the game there’s plenty of unlockable content, along with additional content that’s coming at a later date. Hopefully the model that Yacht Club Games is using for Shovel Knight proves to be just as successful for Shantae, provided the stream of content is at a good clip. What is present in the game, though, is excellent from start to finish. You just have to get used to seeing the same locations multiple times.

You’ll also get plenty of transformations that will allow Shantae to navigate the levels in different ways. The monkey transformation gives her the ability to climb walls, while the crab form allows her to descend into the watery depths. The elephant transformation is great for clearing out large breakable stones, and the mouse form can navigate through tight spaces. There are a few other transformations as well, and all will have utility in some form or another as you attempt to go for that elusive 100 percent completion trophy. 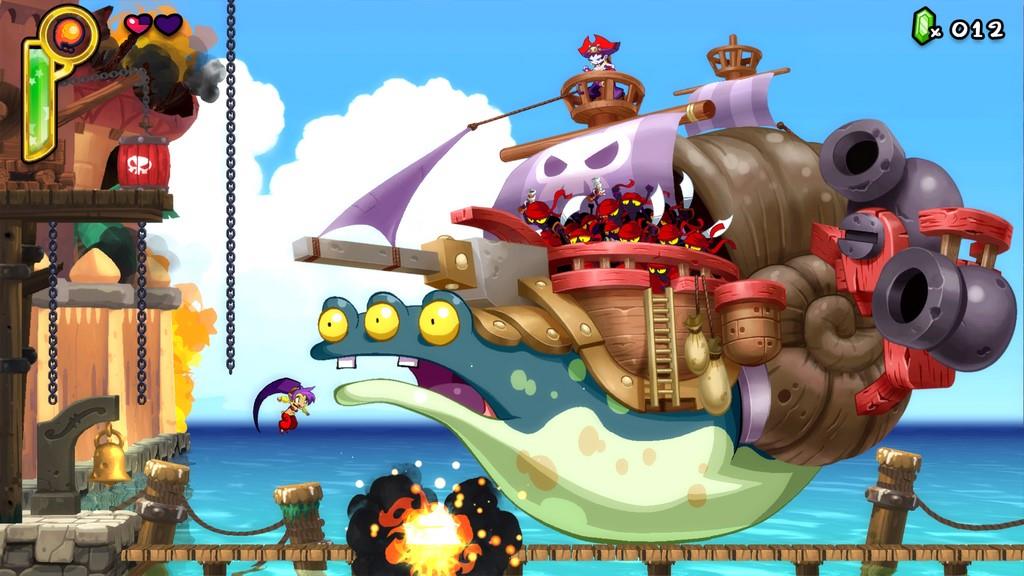 Visually, we knew this game was going to be something special. Wayforward is if nothing else, known for their excellent animation in all the games they work on. Shantae: Half Genie Hero is the team’s first true HD effort, and it shows from start to finish the dedication that goes into making a game look this good. However these looks come at a cost on the Vita, as frame rate drops are a regular occurrence. On the PS4 this is less of an issue, and, in fact, the post-production of effects make this game look even better. Every piece of animation in this game is fluid, and the characters are downright charming. The soundtrack is equally excellent, with quality tracks provided by Jake Kaufman. He fit the theme perfectly with a wide variety of genres. Christina Vee also does a great job of voicing the titular heroine, along with a few other characters. Though it’s kind of a bummer that there wasn’t more spoken dialogue in this game.

If there’s anything I’d dig at this game, it’s that it’s a little too by-the-book for Shantae standards. We knew that the conversion to HD visuals was going to take the bulk of the work. And while the level design is excellent, players are going to see the same places a number of times throughout their adventure. The unlockable content is nice, but it still takes place in the same world. However I would like to shout-out Wayforward for including all the Shantae fanart in the gallery. That was a nice touch.

For the money you spend, you’re not going to find a platformer that’s a better overall package than Shantae: Half Genie Hero. The adventure is a little on the short side, but it is, from start to finish, a solid experience. The new HD visuals are a treat, and the amount of love that this game exudes from its development team is a testament to the quality that Wayforward puts into their releases. I can only imagine how much more content a full-priced game would contain.

Wayforward's heroine has come a long way from her GameBoy beginnings, and she's still got some great adventures in her yet. The gameplay is on point, and the visuals are top notch. The experience is a little on the short side, but fun throughout.