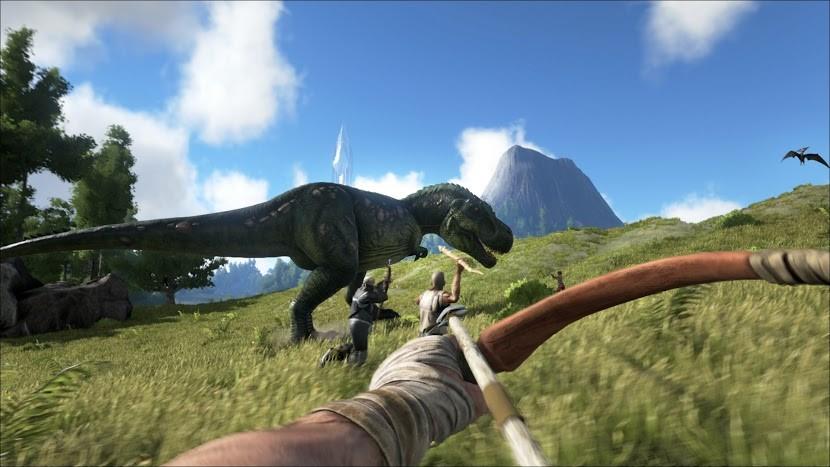 Between H1NZ, Rust, Day-Z, and more, there is a plethora of these survival-type games. I really haven't played that many of them except for the Day-Z mod for ArmA II when it was first released. I died. A lot. That said, it was fun for the short time I was alive every time I tried to play. Aside from that, I really haven't found a survival game that I found all that interesting. ARK: Survival Evolved piqued my interest when I learned that it included something that these other games did not have: dinosaurs. Yup, rather than zombies, you have dinosaurs you have to worry about. That and the deadly environment itself. I got a chance to check out the early access version of ARK: Survival Evolved on PS4.

The goal of ARK is pretty much in the name itself: survive. After joining a server, you create your character, male or female, and are then dropped into a random location on the map with nothing except a pair of underwear. There you go. You are on your own. As soon as the game starts you are left to your own devices to find food, materials, and other things in order to survive. Of course with these games, there is also the presence of other players that you need to take into consideration. During your journey you encounter other players who are trying to survive, just as you are. This is where things can get interesting. For the most part, if you are a new character with nothing, other characters will probably leave you alone. However, if you've got some decent equipment on you, other players may try to kill you to take your gear. After all, they are trying to survive as well. This adds a whole trust element into the game. You really need to think if characters you run into can be trusted or not. During my journey, most of the other players I ran into actually helped me out a bit by giving me food or smaller weapons to get me started.

Of course there are the jerks that killed me within five minutes of me showing up.  When you die, your character is essentially deleted. As in, gone forever. You lose anything that you picked up along the way. If you leave a server you can come back right where you started and with all your equipment. Luckily the game does include PvE (player vs. environment) servers, too. You can play on those servers and not have to worry about other players killing you. These servers are where you will easily be able to find other characters to team up with and help you out. Most of my deaths were due to the environment. Either I couldn't find clothing when it got too cold, or I loaded into a map at night and couldn't find food or water. Go outside when it's nighttime, wherever you are, and you can literally see nothing. This probably means instant death if you are loading in for the first time. 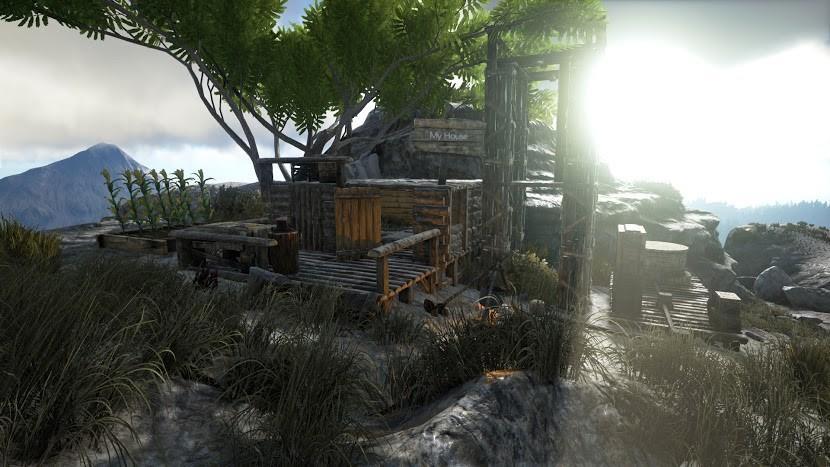 There is also the expansion called Scorched Earth. Rather than appearing on a island with a jungle, as in in the normal game, the Scorched Earth map drops you into the middle of a desert. There you will worry about things like heat and thirst. Usually what I did with my first 10 or so characters was try to venture out as much as I could and explore the area. I didn't try to do much crafting because I wanted to survey the land and try to put together a plan of attack. Rest in Peace, Jerry, Matt, Mary, Stacy, and all of my other characters that were brave enough to go out alone to get the lay of the land.

Of course one of the big selling point of this game is the fact that you can fight and tame dinosaurs. Here is a pro tip: Don't even try fighting dinosaurs unless you are high level or have a group of people with you. I made that mistake the first time I found a dinosaur and, well, wanted to see what would happen if I attacked one. The results were what you would expect. So, if you see them, run away. You will be doing this a lot. Some of the smaller dinosaurs can be taken down with makeshift spears and axes, but the larger ones will destroy you instantly. The best way to try to tame a dinosaur, or to take one down, is to work with a team. There was one time where I saw someone running away from one of the smaller predator dinosaurs. I jumped in and we killed it together. Moments like that are really where these open world survivor games shine brightest.

Keep in mind that this isn't a review because this game is in early access right now. Because it's not finalized, this game has currently some very unfortunate bugs and glitches. First of all, the menu system needs a lot of attention. Simply selecting a server when starting a new game is a chore because it seems like your button inputs don't work at all. I have had to hit the X button 20 times or so just to select what server I wanted. The other problem is that there are some serious frame rate issues. Of course this is all early access. The game technically isn't finished, so I can't fault them that much. ARK certainly has its issues, but I have hope that a lot of them will work themselves out as the game gets closer to its official release. As it stands, there is certainly a lot to do in ARK--granted the cards are in your favor and you don't have to deal with jerks if you play on the PvP servers. If you play on the PvE servers, there is a lot of fun to be had even with the game's current glitches.