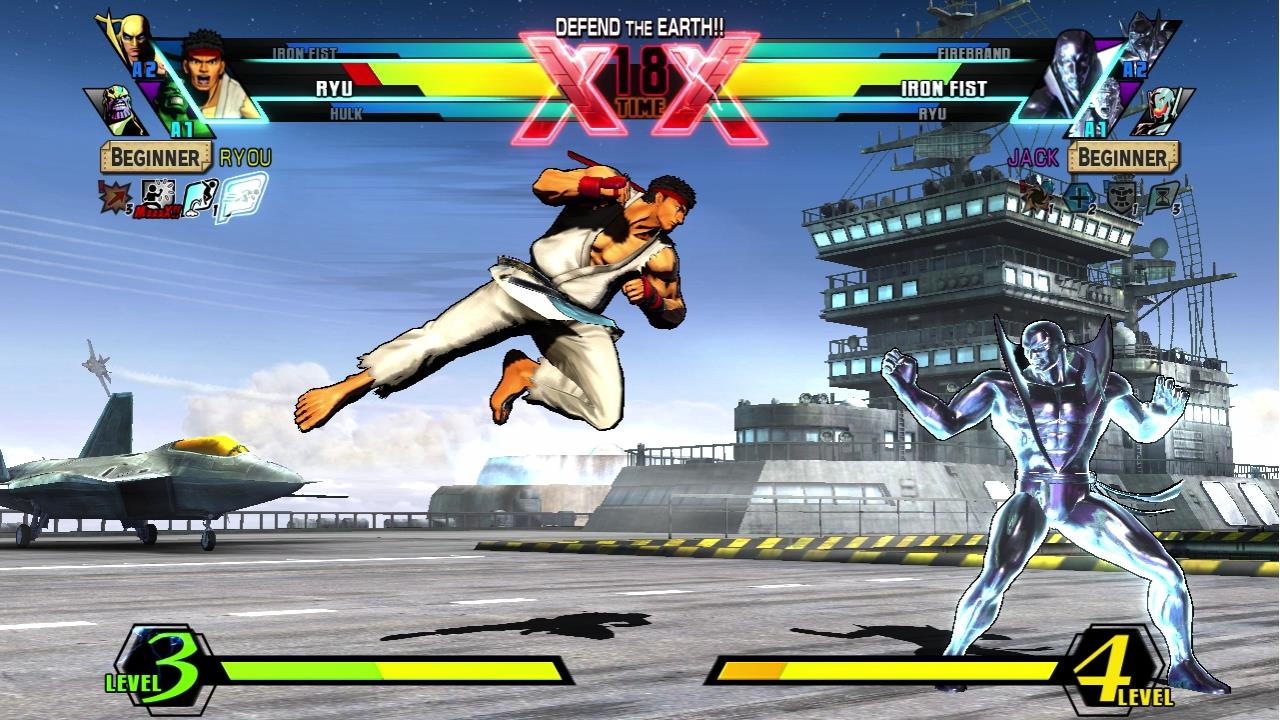 Capcom recently announced that Marvel vs. Capcom Infinite, the fourth game in the Marvel vs. Capcom series, would arrive sometime this year. Now, PS4 and Xbox One owners will be able to check out the third entry in the series, as Ultimate Marvel vs. Capcom 3 has been released on current gen systems, complete with all of the added content and DLC that was released years ago. I love Capcom fighting games. It feels familiar but it also changes up the Capcom fighting formula enough to feel fresh. At the same time, it's one of those fighting games that is incredibly easy to learn but very difficult to master. It's perfect for new players and seasoned veterans, too. How does Ultimate Marvel vs. Capcom 3 hold up after all these years? Pretty damn well.

As the name would suggest, Ultimate Marvel vs. Capcom 3 pits various characters from Capcom's biggest franchises (Ryu, Chun Li, Chris Redfield, Dante, Felicia, Viewtiful Joe) against Marvel Comics' biggest franchise (Wolverine, Dr. Doom, Spider-Man, Iron-Man, X-23, Thor, Phoenix, Storm). A personal favorite of mine would be Phoenix Wright from the Ace Attorney series, who was one of the new characters added in the Ultimate update. Even though he is listed by himself, he is essentially a tag team character. His assistant and best friend Maya will show up in a variety of his attacks.

This is a port of the Xbox 360 and PS3 versions of the game with beefed up graphics, which look even more beautiful, and the game now runs at a smooth 60 frames per second. This version could also be considered the "game of the year" edition, I guess you could say, as it includes all of the added content from the previous version, including the additional costumes which were only available as DLC when the game was released years ago. With the characters added in Ultimate and the added DLC characters, there are a whopping 50 characters to choose from with 25 from each side. It will be pretty easy to find a set of favorite characters to fight with. 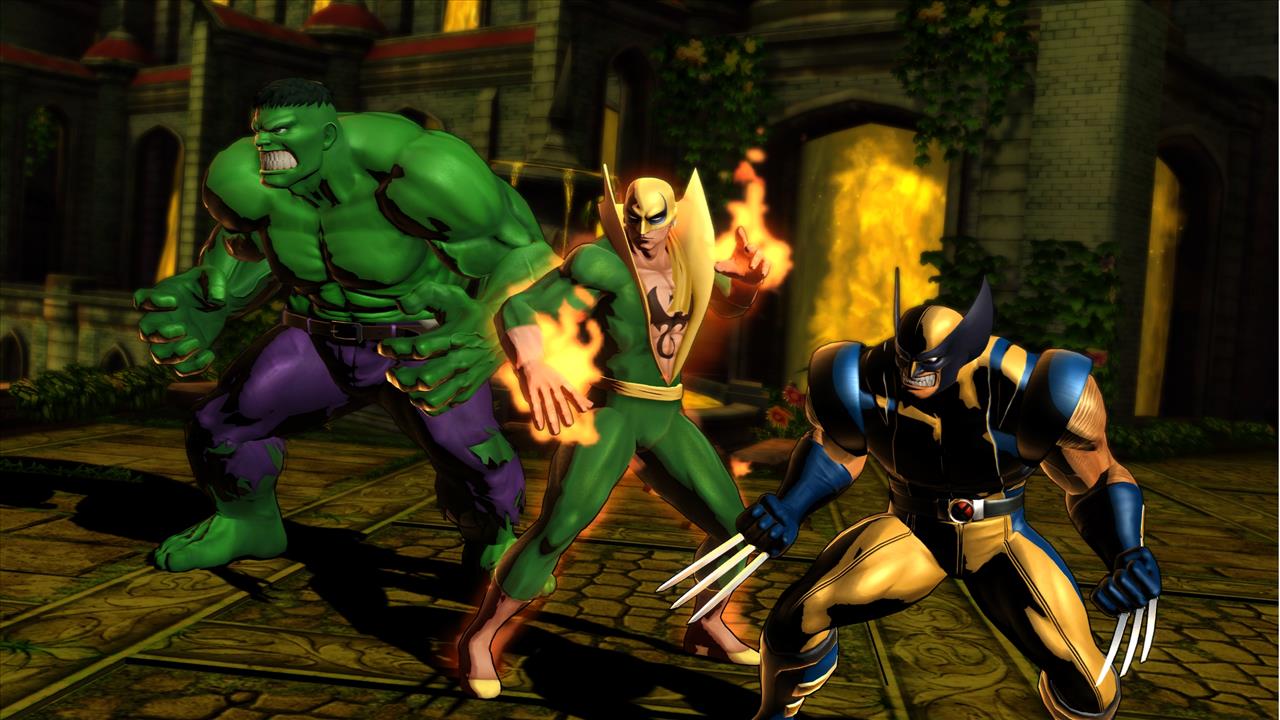 Ultimate Marvel vs. Capcom 3 main battles are 3v3 fights where you select any three of the 50-character roster to form a team. The main fight is one on one. But there are a variety of assist attacks where you can call in one of your partners to help you out, including brutal triple-team attacks which dish out ridiculous amounts of damage, if you time them right. Each character also has ultra moves that put out crazy damage. The goal is to knock out all three of your opponents, so it's incredibly important to keep an eye on your health and swap out if you need to. The final attack that each team has is the ridiculous X-Factor attack. The X-Factor gives your team a huge boost. You take less damage, deal more damage, and also regenerate your health while it's active. With assist moves and X-Factor, you can easily 100-to-0 your opponents almost instantly. Thankfully it is usually used as a last resort and can only be activated once per match.

The main difference between Marvel vs. Capcom 3 and other Capcom fighting games is that button inputs and combos are simplified—compared to their other games like Street Fighter. The first time I played this I was using Chun Li and was trying to do Hikokens and Spinning Bird Kicks with charging moves and was wondering why they weren't working. That's because almost all of the characters in the game use the stand-quarter-circle or dragon punch inputs for moves, and there are only three attack buttons: light, medium and heavy. This makes sense because compared to their other fighting games, Marvel vs. Capcom 3 is an insanely fast fighting game, so fast that it even may become disorientating to play. There are times where there is so much stuff flying all over the screen, characters tagging in and out, and combos are being unleashed with such furious velocity, that I completely lose track of where my character is. 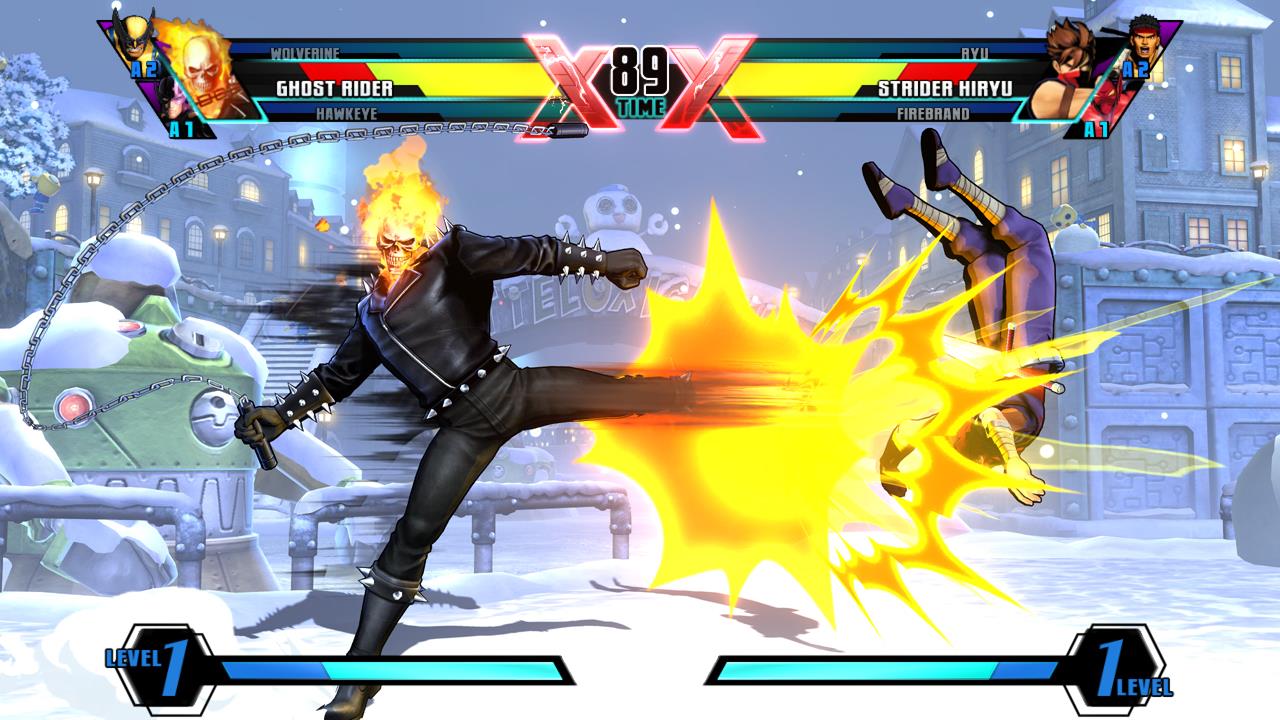 One of the biggest complaints about the first release of Marvel vs. Capcom 3 is that there weren't a lot of game modes included at launch. Ultimate Marvel vs. Capcom 3 fixed this by adding additional game modes in the initial launch via DLC. This port of the game has all of the new modes already in the game and includes an arcade mode in which each character has their own ending. A trials game mode, which is pretty much your standard combo challenges, and Heroes and Heralds, a game mode where you will probably spend most of your time if you aren't into arcade mode. The Heroes and Heralds modes contains two separate modes. Online and offline. In the offline mode, you choose whether you want to fight for the heroes or the heralds. Regardless of what side you choose to fight for, you can still form a team of any of the characters from both sides. Basically, you are fighting for territory, as you will see a grid of fighters with varying difficulty levels. Winning these fights will earn you skill cards which you can bring into battles to give you advantages over your opponents. Some of these cards will give you extra meter at the start of a round, reduced damage, and increase the rate at which you gain meter. Online mode, however, is completely different. For me, I spent a majority of my time in this mode because collecting the cards does become addicting. It's always fun to complete a fight knowing you are going to earn a rare card. In the online mode, you choose again whether you want to fight for the heroes team or heralds team. In this mode, you will face off against other players online in quick matches where wins and losses will contribute to your team's total stats. All of the online players who choose either heroes or heralds are all working together. At the end of the week a winner is determined. Being the winner for the week will earn you metallic skins and cards.

Aside from the technical update of 60 FPS and 1080P, this is the exact same game that was released originally on the PlayStation 3 and Xbox One. If you weren't into the game back then, there isn't anything new here to get you into the series. If you missed out on the game years ago, then this is a great way to try it out; the last gen versions have pretty much vanished into thin air since the digital versions have been removed, and disk copies are hard to come across for cheap. With this latest release, it also pumped some more life into the game as you can easily find someone to play online—whereas it could have taken awhile on last gen systems as most people have moved on. Regardless of the fact that is is just a straight port, it's a port of a great game that many more people will get to try out.