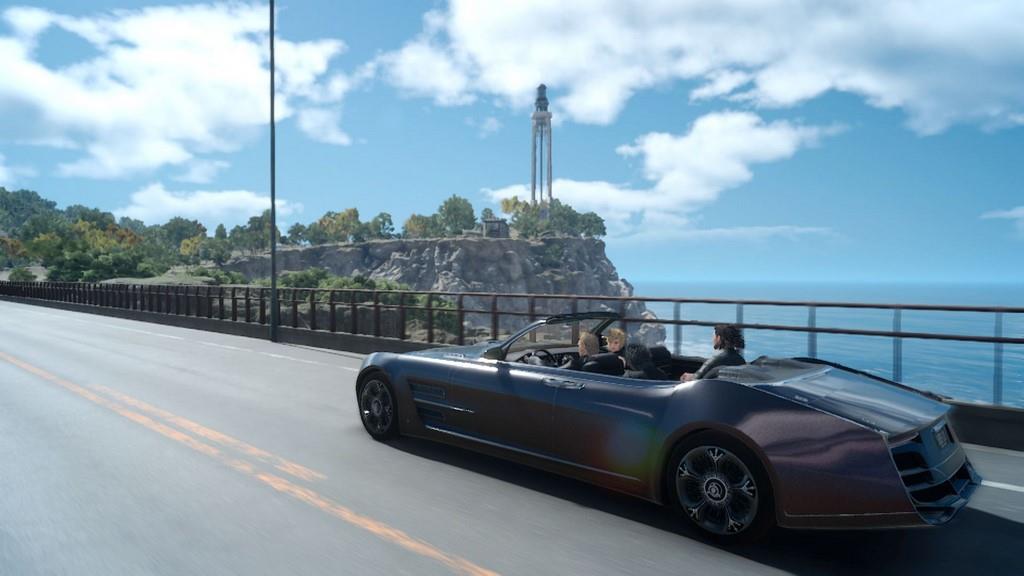 So let’s talk story. You’d think after ten years, this thing would be buttoned up and pristine. Unfortunately that’s not quite the case. As Prince Noctis Lucis Caelum, you set out on a mission to meet with the Oracle, Lunafreya, who will help Noctis claim the power that will stop the Empire that has sacked his kingdom, murdered his father, and stolen the Crystal that provides protection to the city of Insomnia, the last holdout against the Empire’s march toward total control of the land of Eos. There’s a lot of gaps here and there that can be filled in with the add-on movie: Kingsglaive. But certain character motivations seem to flip for almost no particularly good reason, the common one being, ‘I didn’t like what the Empire was doing.’ The culmination of the story also feels a little bit rushed, but the ending was pretty touching, and this is one you definitely want to stick around through the credits for.

The story moves along at a good clip, and starts with players having access to a pretty wide-open space that gets progressively bigger as the story continues through the game’s fifteen chapters. At a specific point, the narrative becomes a lot more linear, and at that point there are a few moments that drag, particularly in chapter thirteen, which SquareEnix has acknowledged and is going to patch in the future, which is a bizarre action to take, because nothing is fundamentally broken. But the ‘dungeon’ of chapter thirteen takes a rather long time to complete, so it’s cool to see that the developers are actively finding ways to tweak the game to make it better, but for this review, I went through the ‘long’ version of this, and yeah it got to be a bit boring after a while, but it was a small piece of a much larger experience. A lot of Noctis’ adventure is spent chasing after Lunafreya, while fulfilling quests throughout the land, whether it be acquiring the powers of the six gods, finding the weapons of King’s past, or tracking down a zu egg for the best way to enjoy a cup noodle dish, there’s plenty to see and do, and the world is absolutely gorgeous, with a few notable exceptions.

Visually this game is absolutely without peer. This is one of the best looking games out there right now (the game gives you plenty of still shots to prove that point), and SquareEnix has crafted a beautiful world full of great visual landmarks, and towns that look like postcards from parts of Europe or South America, and then there’s the food porn that you’ve been seeing everywhere. It’s a shame though that this game exhibits a lot of the same issues you see in other open world games. You’ve got a lot of texture loading and flickering, issues with reflections on the water (which is really prevalent at Galdin Quay), and the framerate isn’t that great, even with the game set to ‘Lite’ graphics on a PS4 Pro. There’s a patch that is expected before the end of the year that will take advantage of the PS4 Pro hardware, but it’s a bummer that it wasn’t available out the box. To top it all off, there’s a massive day-one patch that players had to pull down. Which begs the question, what about that two month delay so that we didn’t need to have patches on the disc when it came out? Considering that the patch unlocks the very helpful Ascension skills for ‘Wait Mode,’ it’s disappointing to see that even the most venerable series is falling victim to the ship and fix attitude of development.

The Yoko Shimamura soundtrack is a marvel. Full of variety, and yet familiar with that Final Fantasy sound, it has a memorable battle theme, the Chocobo theme this time around is great, and has a nice low-key arrangement when moving at a slower pace. And then there’s that intro, featuring the haunting vocals of Florence Welch, of Florence and the Machine, covering Stand By Me set to the Final Fantasy theme. I only wish that song had more presence throughout the game, along with the other songs she produced. The voice acting by the English cast is quite good, with Ray Chase delivering an excellently angsty Noctis, and the rest of the bro-trip companions fitting perfectly. Robbie Daymond’s Prompto is a good comedic relief, Adam Croasdell as Ignis has the right balance between retainer and brother. And Chris Parson’s gravelly Gladiolus balances out the cast. I was a bit thrown off after watching Kingsglaive, and hearing Lunafreya voiced by Lena Headey, because I thought Amy Shiels was an excellent selection that could have done both roles. But if the English cast isn’t your bag, then the Japanese cast will fill in just fine.

What’s really a blessing and a curse is how wide open this game. There’s just a wealth of content in Final Fantasy XV, especially in the post-game. The main campaign can take a little under forty hours to complete if you’re quick about it, but that means you’ll be a little underleveled by the time you return to Insomnia to claim the throne. So you’ll be partaking in a lot of side-quests and hunts. The side-quests provide you a mechanism to see all that the world has to offer, while hunts are there to make you fat stacks of gil. It’s unfortunate that you can only queue up one hunt at a time, because a lot of your time is going to be spent driving Noctis and his pretty boy retinue from point to point. But you can fast-travel, which is a definite boon. But sometimes the drive is pleasant, just queue up one of the many Final Fantasy soundtracks, or fresh beats from the likes of Afrojack, and set off and see the sights.

You’re also going to be fighting a lot of enemies in your adventure, and this new combat system is an interesting path for the franchise. It’s both interesting and infuriating. Throughout the entire game you’re controlling only Noctis, so in combat he’s really the only person that matters. If he loses all his HP, then it’s game over. But with how combat works you more or less have two health meters. When you have hit points, then combat proceeds as normal. When your hit points hit zero, then you have a limited time before your hit point cap starts to decrease, and when that hits zero, then you’re forced to use a Phoenix Down to resurrect yourself or a party member, and if you’re out of curatives, then it’s game over.

Now, when you’re actively fighting, the circle button is held down to ‘blitz’ enemies. This means you’ll be continuously attacking them with whatever physical arm you have equipped. You can slot in magic as well, and they act like consumable grenades that can do massive damage, but need time to recharge and can harm your party members. You can also dodge attacks at the expense of Noctis’ magic points by holding the Square button, or Warp-strike to enemies using the Triangle button. So a lot of fights involve holding either button, swapping between the two, warping to the next enemy, and then dropping curatives as necessary. It’s really free floating and fast, but I never felt like I was doing well in battle until I was massively stronger than standard enemies in the field. Items are an absolute necessity this time around which feels weird for a Final Fantasy game, it’s almost like there’s no strategy involved, outside of swinging with the weapon that your enemies happen to be weak against. Also, what’s up with the Empire? Do they have the latest in LoJack technology installed on Noctis that he doesn’t know about? There are drop-ships that love to just happen by overhead while you’re in the middle of fighting something else, and drop off more enemies to join the fray. 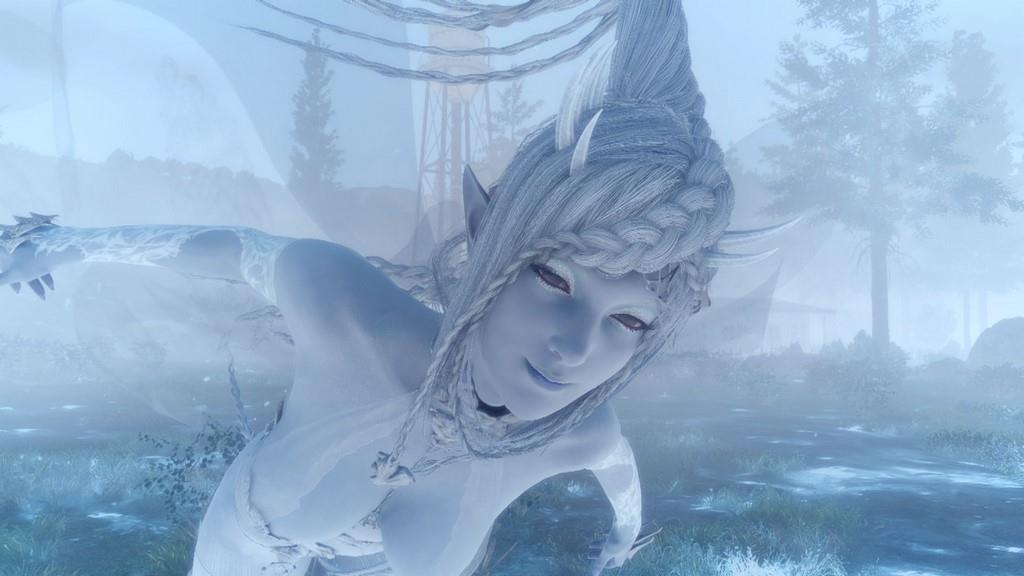 This game is also full of infuriating design decisions. The biggest one? The X button. This button is used for interacting with objects, but it also serves as the jump button, and even at hour seventy, I’m still jumping when I mean to interact with something. It’s incredibly annoying. Then there’s the Ascension system. This functions like the Sphere, Job, and whatever other grid SquareEnix has used as a skill tree to date. You earn new skills in exchange for AP, which you get from leveling up, and can earn more by unlocking Ascension points that give you AP for long car drives, chocobo rides, fishing, and myriad other events. The problem is that by the end of the game, you’re incredibly far away from being able to fill out the Ascension grid. Even at level cap, I still have well over six thousand AP to acquire to fill out the grid, and these supplemental AP gains are miniscule, so expect to grind for AP to earn some of the Limit Break skills, or top tier magic abilities. Another thing that this game does a poor job of, is letting you know what’s safe to sell. I carried a ton of items with me throughout the game, unsure of what treasures I should sell, and which I should hang on to. Yes the quests are there that give you a specific item to obtain, but some items are incredibly rare to come by and may have a secondary purpose, like the Oracle Ascension Coins, don’t sell those, save them for later. On the flipside, there are fun diversions. Justice Monster Five is a pretty cool mini-game, and fishing is a ton of fun and can yield some very useful items.

Final Fantasy XV was a game that SquareEnix needed to get out there, it’s been in development hell for what feels like forever. And now that it’s here, and it’s definitely a great game, but you can tell that the development period has had an effect on the overall quality of the game. But I’d be remiss if I said I didn’t enjoy myself from start to finish. Hajime Tabata has done an amazing job in saving this project, while at the same time moving the franchise forward, but there were definitely some cut corners in order to get this game out by the end of the year. If you’re a fan of Final Fantasy games, then you already have this. If you were waiting for reviews, I’m torn between telling you that you should be playing this game right now, and that you should wait for a final package with all the DLC that’s planned for the future, because I think that’ll be the true game, when all is said and done. But for a base game that’s out now Final Fantasy XV tells a great story of friendship, responsibility, and brotherhood. For me, the wait has been worth it.

Ten long years have culminated in a game that's a bit rough around the edges, but enjoyable. Kudos to Hajime Tabata for getting this thing done. For me it was enjoyable throughout, and I'll be seeing this one through until I have the platinum trophy, but I think that feat is reserved for only the most dedicated franchise fans.