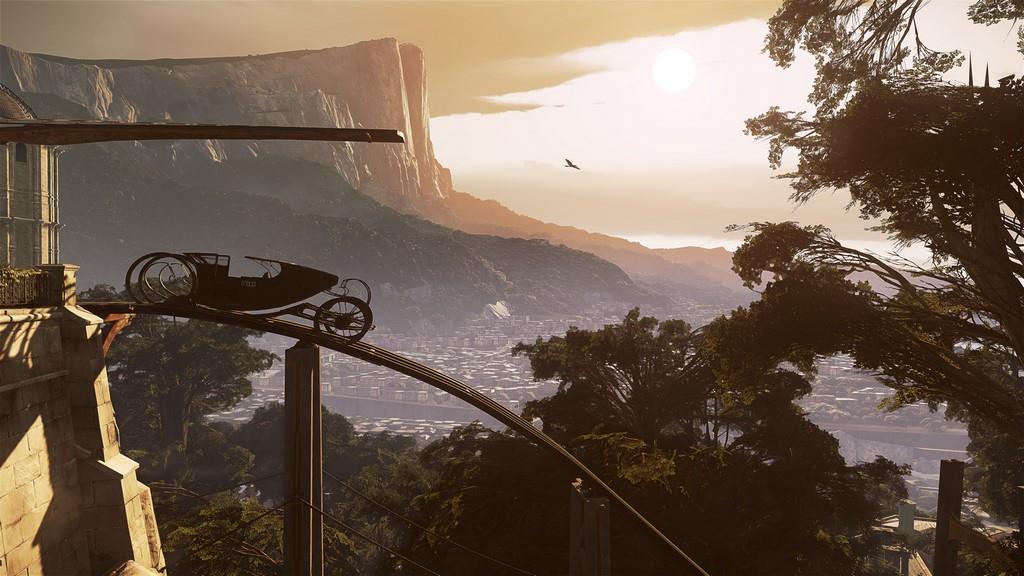 Dishonored 2 got off to an inauspicious start for me. Booting the game up on my PC with a portrait oriented second monitor, I was surprised to see the strange resolution that looked like some bastardization of 800 x 600. There’s been a lot of reports of the PC version being buggy, and this was the first step in a long process that involved a few reboots, a few driver updates, and even disconnecting my second monitor to get the game to realize that it needed to load on the proper display. A few minutes of troubleshooting, and I was ready to get this game started, albeit with an already sour taste in my mouth.

With all the issues surrounding the PC launch revolving around the visuals, I have to say that this game isn’t perfect, but it look damn good. The evolution of visuals from the Void Engine makes Dishonored 2 one of the most attractive games of the year. But it’s not without a few hiccups here and there. They include some reflection issues, texture shimmering, errant lighting issues, nothing horribly game-breaking, but disappointing regardless. The visual design that went into reforming Dunwall and the new realm of Karnaca provides a sight that is at times breathtaking, as you sit off the coast on the Dreadful Wale, the ship that serves as your base of operations, you’ll see the windmills that power Karnaca, the palace of the Duke of Serkonos, and other landmarks that make this southern jewel of the empire, sparkle. Each new location ups the visual ante, as you explore the coastal gem of what was once Emily Kaldwin’s empire.

The young charge that Corvo Attano had to save in the first Dishonored has now come of age and as empress has navigated Dunwall through the rat plague that threatened to destroy the empire. Fifteen years have passed, and now the throne is usurped by Delilah Kaldwin, long lost sister of Emily’s deceased mother. You are given the choice to play as either Emily, or her father, Corvo, as you travel to Karnaca to discover the origins of Delilah, and hopefully find a means to stop her. I need to park it right here and also give props to the casting of this game, as the casting for this game for all of the enemies and side characters was just excellent. Vincent D’Onofrio as Luca Abele gave just the right amount of snark to the role, while Rosario Dawson played a great Meagen Foster, who guides Emily and Corvo on this journey to reclaim the throne. 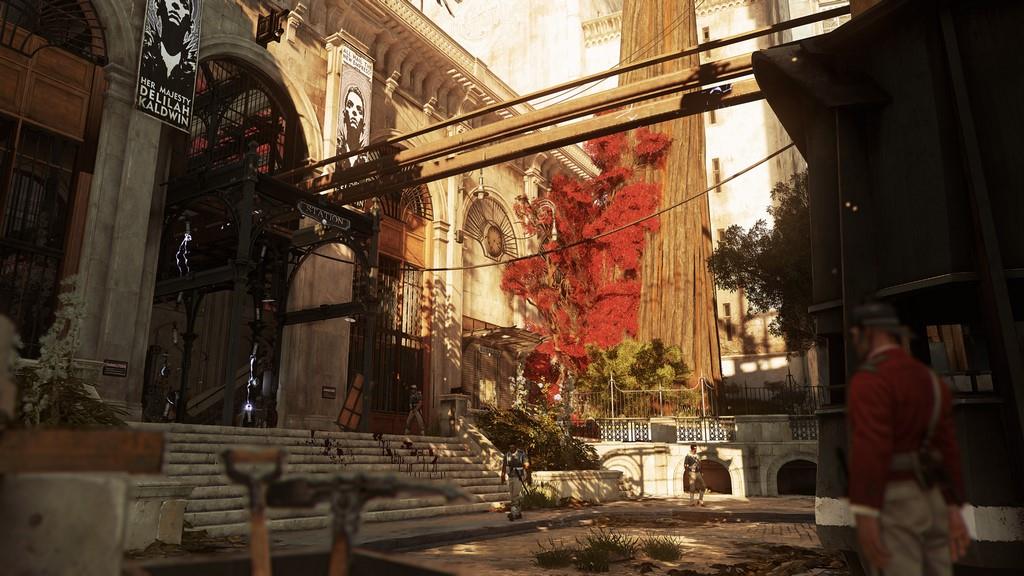 Each new area of Karnaca that you explore will introduce you to one of the schemers that helped Delilah rise to power. You’ve got the mad inventor, Kirin Jindosh, who values intellect above all, and challenges people to enter his home. His villa makes for one of the most striking set-pieces in gaming, with rooms that shift and maneuver in unnatural ways. Then there’s the Dust District, a part of Karnaca that is under constant assault by winds that carry the detritus away from the silver mines and deposit it on the town. Here you’ll skulk around two warring factions in order to make your way to the home of Aramis Stilton, the man who runs the mines, but his home has fallen into such a sad state, and you’ll have the ability to shift between the present and the past in a really unique way. You’re given a lens that allows you to see into the past or present, depending on your location, and you can shift between the two timelines, which allows you to sneak by guards, enter hidden rooms, and find the clues that will help you to defeat Delilah. You’ll also have the choice in how to deal with these people, much in the same way you did the first Dishonored. Will you show mercy? Or is revenge your ultimate goal? The path you choose will ultimately affect the ending you receive and once New Game Plus gets patched in, you’ll be able to carry your character over a new playthrough. It’s kind of a bummer that it’s not present at launch, so it’s not really a factor in this review.

In your travels you’re going to find a ton of side-quest content as well. Bone charms and runes are littered throughout Karnaca, along with altars to the Outsider, as his influence permeates everything going on in the story. These are what fuel your powers, and ultimately it behooves you to find them. I don’t regret for a second that I padded out my game clock by looking for runes and bone-charms, some of the skills you get are literal game-changers. Corvo and Emily don’t share powers, so they play differently from each other. Both have skills that aid in mobility, and elimination. Emily’s powers are a fun addition to the skills that Corvo carried over to the original game. Her Domino skill allows you to link her victims together, take one down, and the rest follow. It’s a great way to save on sleep dart ammo, and offers up some creative ways to take down foes. This game will push your creativity to the test, and it does a great job of giving you all the tools you need to do some rather elaborate takedowns and kills. At the outset though, the game can feel a little tough, the sword-fighting is a definite last resort option and so you have to take care that you don’t get swarmed with enemies because once more than two show up, and all you’ve got is a sword, you’re going to have a hard time surviving. 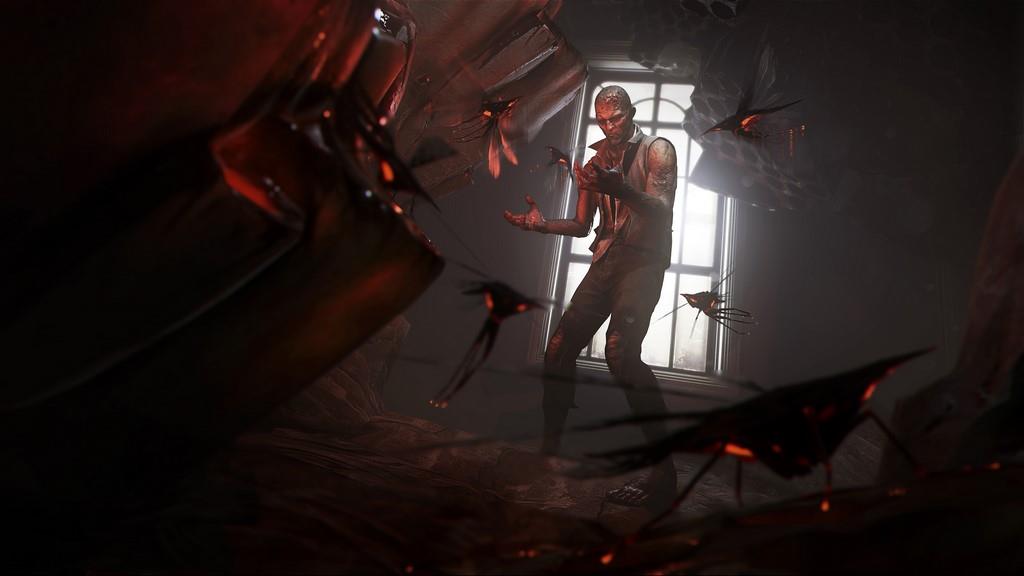 This game isn’t without its fair share of issues though, and some of it stems from the use of those powers. On a number of occasions I used Emily’s Far Reach powers that allows you to travel a short distance, but sometimes I’d be launched a much further distance than expected, and when you’re trying to make pin-point landings, having that go bad usually results in a cheap death. And while her Domino skill is a blast to use, it has a strange habit of launching enemies at a terminal velocity, so while I meant to put enemies to sleep, they’d sometimes get launched against a wall, and to their deaths. And while the game isn’t totally rigid in requiring no deaths for the best ending, it’s going to give achievement hunters a bit of a problem.

So start-up shenanigans aside, how is Dishonored 2? Quite good actually. It builds upon the playground feel of the first game, giving you plenty of tools to succeed in being the merciful empress, or the revenge driven royal protector, or vice versa, and both play to a satisfying conclusion. The new visuals driven by the Void Engine make for an utterly beautiful game, once you get past the hiccups of setting everything up. And the New Game Plus feature that’s coming soon should add even more replay value to an already deep experience, and is a move in the right direction after such a messy launch.

Dishonored 2 was a pain in the ass to get running initially, but once I did, I was able to settle in for a really fun and rewarding adventure. It's a fantastic sequel that does a great job of building on the strengths of the first game and providing a few new wrinkles that make the game feel as fresh as the first one did a few years ago.