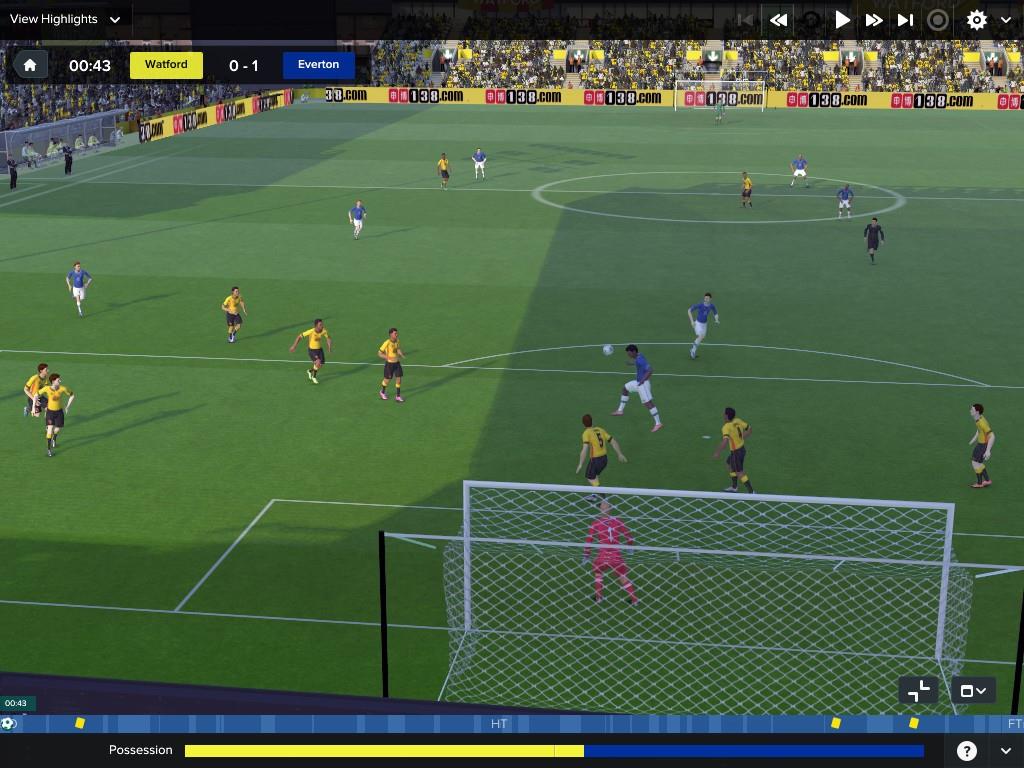 Over the past few years I’ve taken a look at a few different sports management simulators, mostly consisting of the Out of the Park baseball series as well as Basketball Pro Management 2015.  While the games themselves are pretty good, they also proved that I’m terrible at running a sports team.  Granted I do know a lot about baseball, but very little about basketball so my run as a manager there was doomed from the start.  However, I recently received the opportunity to redeem myself with Football Manager 2017.  At first I was thinking that taking a football team to the playoffs can’t be quite as hard as a baseball team.  Then I realized that this isn’t American football, but rather Soccer.  While I’m not the biggest soccer fan, I’m up for just about anything so let’s take a look at Football Manager 2017.

When you first start up the game you’ll have a few game modes to choose from including Career, Fantasy Draft where you can pick your own team and challenge friends online, Online Career which lets you start a career and have friends join you online, and Create a Club where you create your own team.  As with most sims that I review I went ahead and started a Career because since I have very little knowledge of soccer, trying to draft a fantasy team will only end up in complete failure.  When creating your manager this game goes a bit further than other games by not only gathering your info such as name, date of birth, hometown, the team you wish to coach, and so on, but also lets you customize what you’ll look like including the kind of suit you’ll wear and what it looks like.  After that you’ll further customize things by choosing what kind of coach you’ll be, either a more hands-on coach or one who tends to delegate most tasks to your assistant coaches while you work on the more tactical aspects of the game.  After that you’re still not done setting things up as you’ll have the chance to meet with your assistant coaches and set up some more preferences as to what you’ll control and what you wish to delegate to your assistants.  After that, it’s time to finally begin the pre-season.

If you’ve played other sports management simulation games then you should have a good idea as to what goes on prior to the first match of the season, or pre-season in this case.  Each day leading up to the first friendly match of the season will have you performing various tasks such as managing finances, doing a couple of press conferences, looking at various players for possible transfers, forming strategies, and responding to any incoming messages.  However, unlike past sims that I’ve played, Football Manager 2017 gets pretty deep into what all goes on behind the scenes.  As stated you can set certain tasks to be performed by your assistant coaches or leave them to yourself.  I left very few actions to myself as I’m not all too familiar with the ins and outs of soccer, and even still I had to take care of at least a couple of actions each day leading up to the first game.

While I don’t have many complaints about the game, I did come across a bug early on that I want to bring up.  During the game you’ll get a notice about an event that you must respond to (the grey continue box in the upper-right corner of the screen will turn red and say Must Respond when clicked).  About half-way to the first game of the pre-season I had to have a team pep-talk to introduce myself to my players.  The problem was that the game kept saying I couldn’t have a Team Meeting during the pre-season, but I couldn’t progress until I had one.  I ended up having to quit out of the game and go back in to proceed.  The only other thing I did was verify the integrity of the game’s cache within Steam and it somehow worked.  I’m not sure what caused the bug but it was almost game breaking.

Anyway, once it’s time for a game you’ll select which players you want to have on the field, set any strategy and tactics, give a pre-game pep talk if you with, and then proceed with the game.  However, even then you’re not done with active duties.  During the game you’ll manage any team or individual pep-talks to help keep team morale up, change up formations and tactics, and pretty much react to whatever is going on down on the field.  If you’re short on time however, you’ll be happy to know that you won’t have to watch a full ninety minute game of soccer.  After the first few minutes the game will fast forward to any major highlights such as goals, saves, substitutions, and other noteworthy moments.  While you can change the speed of the action on the field during and between highlights, I didn’t see a way to turn it off so you can actually watch the entire game play out.  I may not know much about soccer but I do like to watch a game now and then.  Once the game is done you can take care of any post-game duties and then proceed to the next day. 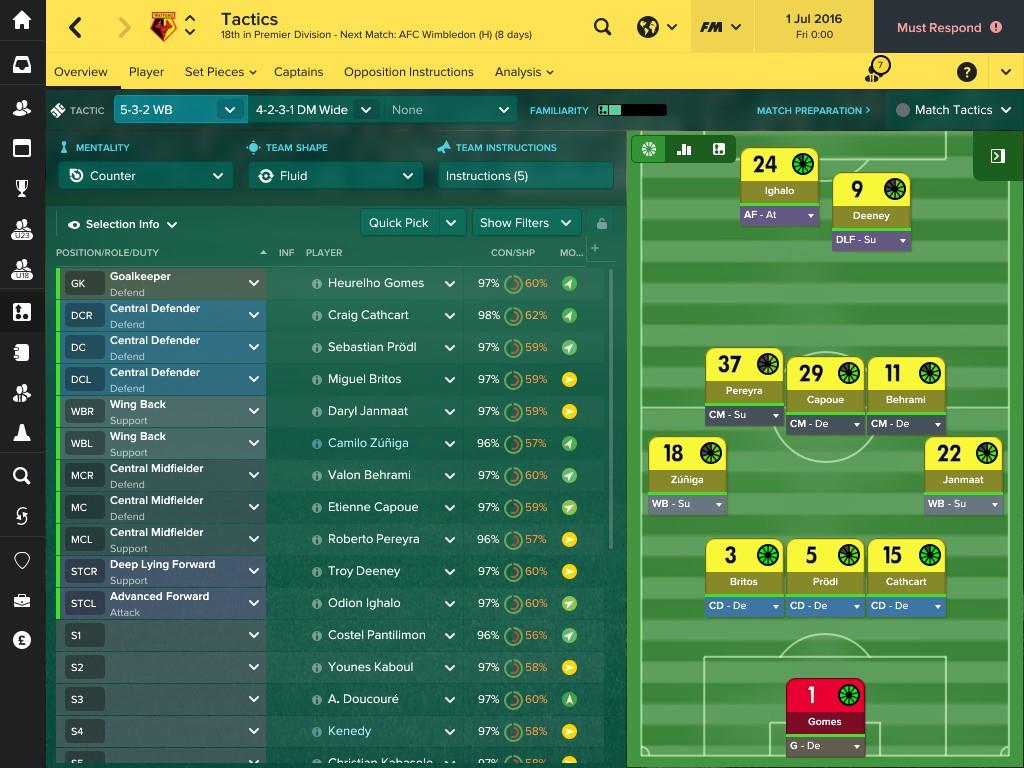 I mentioned earlier that I didn’t have many complaints about Football Manager 2017, but there is one I’d have to bring up outside of the bug I mentioned earlier.  This game is definitely for people who are really into soccer.  With the Out of the Park simulation series I didn’t have too much trouble getting things going, managing things behind the scenes, and making some important decisions.  Part of that may be due to having more knowledge about baseball than I do with other sports, but I don’t follow it as much as other people do, so I don’t pay attention to things like trades and strategies, and strategies in that series aren’t all that complicated.  Here though things are a lot more complex.  You’re essentially doing the same things, but it’s a lot more involved.

The biggest area where I’d shoot myself in the foot if I went through an entire season would probably be the decisions made during the game.  You get feedback from your assistants during the game as to what’s working and what’s not and you have to change up your strategies on the fly.  If the players are taking too many shots from long range, change things up to work more up close to the goal.  Is one formation not working?  Alter the formation to help with your defense.  With Out of the Park and the way baseball works in general, I can instruct how to pitch and swing, but then I can take a few minutes to decide what’s working against a certain player and adjust accordingly, whether it be on offense or defense.  With Football Manager 2017, you have to come up with those decisions on the fly.  You can’t just sit back and watch the action, you have to react to it as it’s happening.

While Football Manager 2017 is definitely not for me, it is a great simulation game for fans of the sport.  If you’ve ever wanted to take a shot at managing your own soccer club, this is a great way to do so.  Beginners or non-soccer fans taking a shot at the game might feel overwhelmed by everything there is to do, even if you delegate most of the difficult tasks to your assistants.  Soccer fans will also want to check out the Fantasy Draft option to draft their own teams and challenge friends online where they’ll have a lot more success than I would.  There’s also Football Manager Touch 2017 available for PC/Mac/Linux, iOS, and Android that essentially streamlines the experience and has you tackling the essentials of the game.  In the end, Football Manager 2017 is a great management simulator for soccer fans to check out, but if you’re still a little weary, you can always download the demo to check it out first.

Football Manager 2017 is an excellent soccer management simulation game for the bigger soccer fans, but causal fans or those who only watch a game here or there might find things a bit complex.  That’s not a bad thing as the game is pretty deep in what you can do and manage at any point, but it can be a bit intimidating you don’t usually play any other soccer video games where you have to do just the basic management functions for your team.  If you’re unsure, definitely check out the demo first.