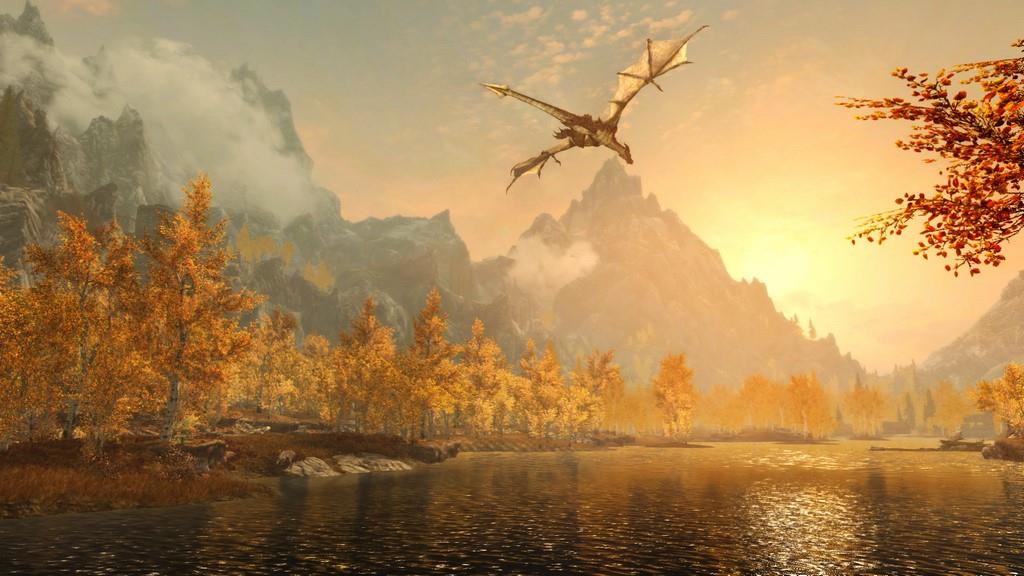 Written by Randy Kalista on 11/9/2016 for PS4
More On: The Elder Scrolls V: Skyrim–Special Edition

So, how does Skyrim fare in a post-Skyrim world? Not bad.

Skyrim Special Edition ports the high-fantasy role-playing game from last gen’s Xbox 360 and PlayStation 3 to this gen’s Xbox One and PlayStation 4 (and, to a lesser extent, ports it to up-to-spec PCs). The special edition comes with all three of its add-ons: Dawnguard, Hearthfire, and Dragonborn. That’s nothing new. What is new is that it comes with a raft of technical improvements—and mods.

Now volumetric god rays cut through the trees and across the peaks, remastered art and effects sharpen up-close textures and thicken the underbrush, a dynamic depth of field sharpens your visual focus, and screen-space reflections, among other things, make for shinier spell effects. But the biggest selling point is the inclusion of mods on console. PC players have had access to Skyrim mods for as long as Skyrim has been around. But developer Bethesda is trailblazing as far as the putting mods on PlayStation and Xbox is concerned. It’s no small irony that the company that introduced the concept of paid downloadable content (remember Oblivion’s $2 horse armor?) is the same company pioneering mods on console, free of charge.

But here’s where the divide between Xbox One and PlayStation 4 begins. On PlayStation, Sony only allows a small space for mods (1 GB), and those mods may only recycle assets within Skyrim’s existing toolset. In other words, no external assets can be downloaded onto PlayStation 4. On Xbox, however, Microsoft allows a larger space for mods (5 GB), and those mods may introduce all-new elements to the world of Skyrim. This is where you get your Thomas the Tank Engine dragons, your Randy “Macho Man” Savage dragons, etc. Both Sony and Microsoft must be trying to keep it clean, however, since nude mods haven’t automatically become the #1 through #8 top mods you can already download.

Most last-generation games would be relegated to a mid-tier pricing scheme, buried somewhere in download-only online game outlets. But not Skyrim Special Edition. This is a full-priced ($60) game with prominent ad placement in online stores, and stand-up display cases in brick-and-mortar retailers like Best Buy. Could another game from 2011 do that today? Dragon Age II? No. The Witcher 2? Nuh-uh. Dark Souls? Okay, a Dark Souls remaster could pull it off, but that’s about it. Skyrim is peerless.

Knowing that doesn’t make a 2016 review of Skyrim Special Edition any easier. On one hand, even when I take Morrowind into consideration, Skyrim is probably my favorite Bethesda game by a fair margin. On the other hand, could we have addressed a few more of these bugs in the subsequent five years since the original release? I would've hoped so. But that doesn't seem to be the case. I get it that the “possibility space” in Skyrim is exponentially larger than in pretty much any other open-world RPG you could name. There are so many systems stacked on systems. It’s a veritable house of cards. It sometimes feels like one heavy sigh could send the whole thing toppling.

A priest might clip through the daedric cage he’s shackled in. Your companion might put on expensive mage robes when, at heart, she’s truly a warrior and couldn’t cast a fireball to save her life. Everyone in the inn might be floating a foot to the left of their barstool. Shadows may disappear entirely when you step indoors. When I’ve tooled around with mods, I’ve crashed to the home screen twice in 20 hours or so. That’s not great. There’s a disclaimer that mods, by their very nature, mess with your game. So, losing a few minutes of gameplay will sometimes be the cost of doing business when it comes to mods. The mods are still fun to employ, though, even in their constricted state on PS4. If you have the choice, pick up the Xbox One version of Skyrim Special Edition. The breadth and scope of mods on Xbox One already blows the PS4’s out of the water. That’s coming from a person that enjoys his PS4 very, very much. 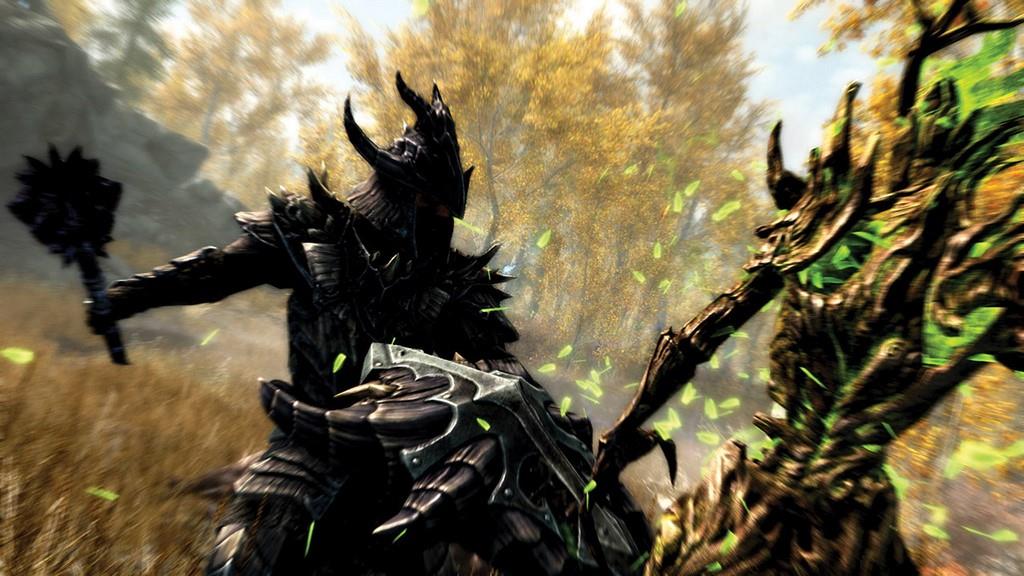 There are more harmless bugs as well. People can sleep with their eyes open, pathfinding can force non-player characters to teleport around, and every person I fistfight stands back up at the end of the fight and walks through the nearest loading-screen door they can find. I have to run after them to collect the bets I placed on myself. Dude better have my money.

Things that aren’t bugs, per se, can still contribute to a negative quality of life in Skyrim. One stray bolt of lightning, one misplaced swing of the axe, or one arrow off target can bring down the wrath of every person within 100 yards. The only thing Lydia loves more than being “sworn to carry your burdens” is blocking every doorway she can find. And you can slaughter every citizen in a town, but taking that book off their shelf still constitutes stealing. I mean, fair warning from the local authorities, I guess.

Hovering over these glitches and lording them over Bethesda misses the point of Skyrim. Skyrim is the high-water mark in "go anywhere, do anything" gameplay. You can be the Dragonborn of prophecy, or you can skulk in the sewers and eat Skeever tails. You can resurrect the glory of the Companions, or find out if the thieves guild really exists. You can side with the racist Nords or the occupying Empire in a nobody-wins civil war. You can hear out the vampires or you can decimate them. You can build a home, marry a spouse, adopt a child, bring home a stray dog, or kill a chicken (at serious risk to your life). You can hoard everything, sell everything, run a one-man crusade, or unite a people. You can climb the city-government ranks of every two-bit king, or, I don’t know, go diving for shipwrecks off the glacial north coast. Be a warrior, a rogue, a mage, or all three. Go wherever the wind blows you, or stick to the beaten path. It doesn’t matter. And yet, the unique storyline you carve out for yourself in Skyrim, of course, matters.

Like I said, the possibility space in The Elder Scrolls cannot be matched by any game out there. Strangely, Skyrim has very little competition in this area.

And so it begins—again. Starting with that slow wagon ride down into the doomed town of Helgen. Only this time with those thick sun rays cutting through the mist and the trees. This time with bluer than blue skies. This time with darker shadows, longer lines of sight, and thicker scrub brush and wildflowers underfoot.

When you step outside after that requisite dungeon crawl, the wow factor just hasn't died down much after all these years. Only this time you see more lava rock strewn along the path to Riverwood. More tufts of grass lay thicker across the plain. There are even new signposts in places there never were any before, pointing the way to cities and towns.

I’ve played last-gen’s Skyrim off an on for the past five years. In fact, I’ve never really stopped playing it; I’ve simply slid other games in between my regularly scheduled Skyrim time. Let me tell you, Skyrim Special Edition is a slightly new world. I won't say it’s like Dorothy arriving in the land of Oz, but the desire to make the comparison did come to mind. Skyrim is prettier. I’ll give it that.

I’ve played several hundred hours of vanilla Skyrim. Yet I’m still thrilled with this remaster. I’m wasting lots and lots of time just angling for screenshots in the peach-colored dusk. I’m stopping and staring at monuments and environments that I’ve run past a thousand times over the last half decade. I’m marveling at weapons and armor that should’ve bored me to death by '07 or '08. I’m running along roads that are at once familiar and yet wholly refreshed. Considering the introduction of mods and the leap to this-gen technology, Skyrim is still pretty great. If you love Skyrim, there’s room to love it just a little bit more. But if you can’t stand paying a second time for a video game full of that classic “Bethesda jank,” then buyer beware. Not enough strides were made on Bethesda's part to fix long-standing gameplay glitches.

How does Skyrim Special Edition fare in a post-Skyrim world? Conceptually: Not bad. Technically: It could use work. The game should've cleaned up some more of its long-standing "Bethesda jank." But the rugged plains, the jagged peaks, and the deep forests of Skyrim are still a sight to behold. These stories, and finding your place in them, is still worth the price of admission.