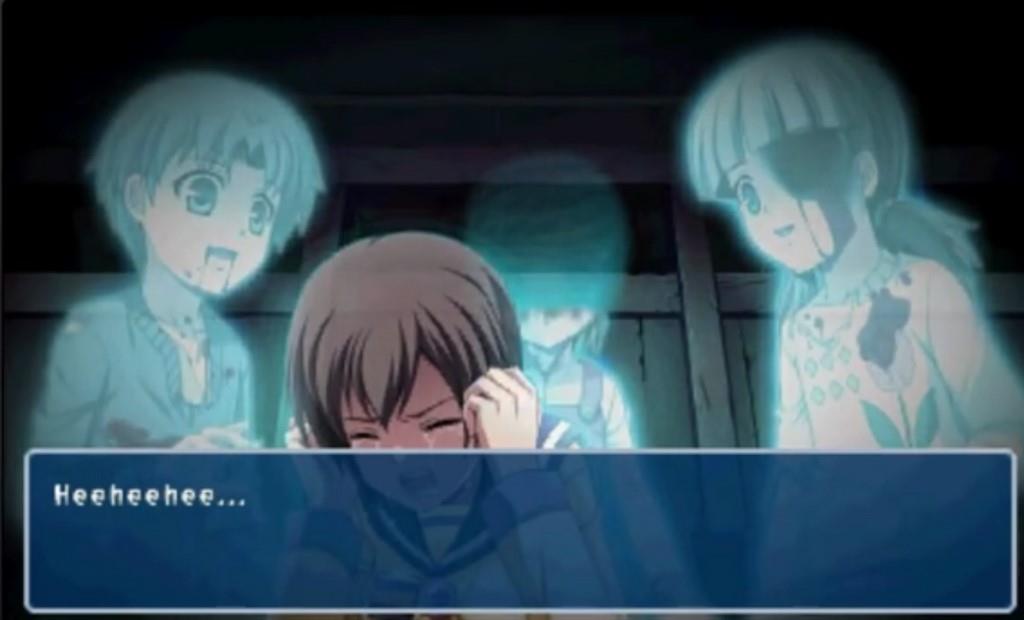 It’s spooky Halloween time! And that means it’s time to play some scary games, and only the spoopiest will do! So let’s just check out one of the most bloody disgusting, disturbing, and downright horrifying games out there, Corpse Party! Does this sound familiar? It should, I reviewed this game when it first came out on the PSP, you can check out the original review here. So what does Corpse Party on the 3DS offer that the PSP doesn’t? Not a whole lot to be completely honest. There’s some improvement to the visuals, the obvious 3D implementation, and a little bit of clean-up to the UI and translation. But the experience is virtually unchanged, which means that 3DS owners can finally get their hands on one of the best horror games out there.

Corpse Party captures everything that makes Japanese Horror, well, Japanese Horror, little ghost children, dilapidated elementary schools, excellent sound design and acting, and some simply messed up imagery that makes Heavenly Host Elementary School one of the most terrifying places to find yourself. The story follows a couple of classmates who have just finished a late night at the school telling ghost-stories, and to cap the night off, a charm of friendship, and suddenly, an earthquake, and when the students wake, they find themselves in Heavenly Host Elementary School, and the fight for survival begins. There’s plenty of ways for the story to play out, with plenty of bad endings along with the ‘best’ path, which is anything but. The kill count is high, and the deaths are gruesome, and if you’re not careful, you can add to the growing number of spirits that haunt Heavenly Host. The five chapters will take a decent amount of time to clear, and hitting all those endings will extend the play time by a fair amount.

One of the improvements that the 3DS version holds over the PSP original, is some slightly improved sprite-work. The characters are now more detailed than before and have a bit more expression to them. The 3D implementation however is kind of weak, it’s mostly reserved for some of the anime still shots, although some of them did get a little bit of lazy animation (though it doesn’t make Seiko’s death any less disturbing). The new animations for the characters also helps to sell some of the horror, and having the options immediately available on the lower 3DS screen means you’re not getting much reprieve while looking at the inventory. The audio of Corpse Party is also equally good as it was on the PSP version. The quality of the acting, and the sound effects really help sell their effects on the story. However, the audio cues are even more pronounced than they were in the PSP version, causing distinct moments of hitching when the audio comes in or goes out, this winds up having a real negative effect on the ambience of the game. 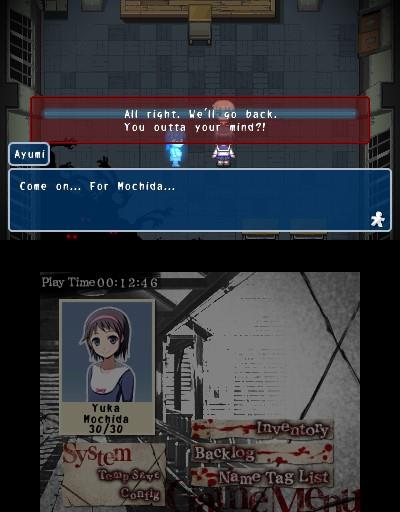 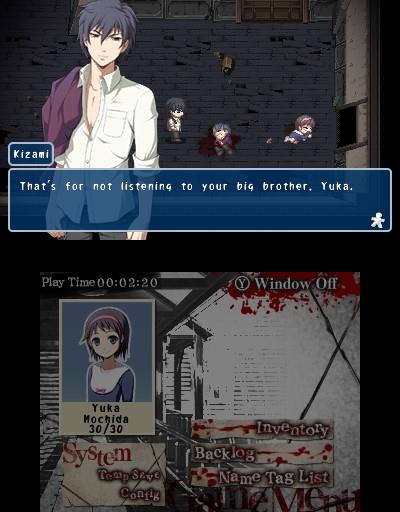 XSeed is known for their translations, and this game is kind of infamous for its ‘buttered poopers.’ Beyond that though, XSeed has cleaned up a little bit of the translation, and really goes for the heartstrings with some of the tragic deaths that happen throughout the game. They also make some of the bad ends a bit more gruesome, so if you’ve played the game before, you’re going to see some slightly different text. There is also the ability to scroll through the text by holding the X button which is a very welcome addition as it made getting some of the other Bad Ends that required specific steps a lot more cumbersome than they needed to be.

And that’s about it, Corpse Party for the 3DS features a few improvements over the PSP original, but also has a few issues of its own. It’s still just as bloody disgusting as it was the first time around, and I still feel like it tells one of the best horror stories in games. But the gameplay is really hampered by those obvious audio cues, and the lazy inclusion of 3D stick out as the most obvious negatives of this port. But if you haven’t had a chance to play Corpse Party yet, and you don’t own a Vita or PSP, then now is definitely the time to check this game out, and then, probably just leave that plot dangling, the sequels aren’t too great. But that first trip to Heavenly Host Elementary School is definitely the spookiest. It’s time to go back to school.

Corpse Party is finally available for Nintendo fans, and it's not the most optimal experience, but the game is still horrifying nearly five years later.