When is a game, not really a game? What qualifies a title as a piece of interactive media? Well with Hatsune Miku: VR Future Live, Atlus and Sega are really pushing it on whether or not this is a game. More a slightly interactive concert than a game, VR Future Live is going to appeal solely to those PSVR owners who’ve never been to a Hatsune Miku concert (whether it’s due to location or cost, though one could argue if you can afford a PSVR, you can afford a concert), or to those fans who absolutely must have everything related to the virtual songstress.

The crux of the VR Future Live experience is to watch Miku dance on stage to a selection of songs divided up into stages that can be purchases separately. One stage will get you six regular songs and a seventh ‘encore’ song that you can only get by interacting with the game. Although interacting might be a bit a misnomer. Your controller functions like a concert glowstick, that you must shake in time with the prompts. There’s an occasional call-out as well where the game expects you to shout along with the virtual crowd. It’s a cool thing to do at the concert with other fans, but doing it in the privacy of your own home feels like a very isolating experience, much like the rest of the game, you’re just watching a performance piece that’s always going to be the same. That’s the only knock I have against the virtual songstress, everything is perfectly choreographed, the songs have no improvisation to them, it’s a very controlled experience, not much different from the real thing to be honest. If you happen to max out the Voltage of the show, you’ll get a special one-on-one encore with Miku.

Visually the concert isn’t that much different than what you’d pay a ticket for, with the exception of the arena that the game places you in, and the effects that trigger throughout the performance. You’ll occasionally see a massive hologram of Miku on stage, or see the platform she’s performing on move about the venue. The Miku model will change to the outfit that corresponds to the song, and as you keep checking out performances you’ll unlock more module cards to collect. The frame-rate is perfectly solid throughout as all the effects are going off mid-show, and the extra effects help set it apart from the live experience. The Miku model is also the same one that’s used at concerts and in the games, so all her movements and mannerisms are going to look mighty familiar.

The music is either going to be your bag or not, but the songs in the first stage contain some of my favorites, Love Song, Weekender Girl, and Satisfaction. So if you’re a fan of Miku and the music, then you’re going to find something in each of the stages available for purchase. At this point I can’t tell if you can make a custom playlist or are locked into the songlist of each respective stage, so just be aware that custom playlists might be off the table. Other stages will bring in the other characters like Kagamine Rin, Kagamine Len, Megurine Luka, MEIKO, and KAITO. The game also features 3D Surround Support, which makes location everything during the show, and you are able to place yourself at select spots throughout the venue to get the best view of the show. 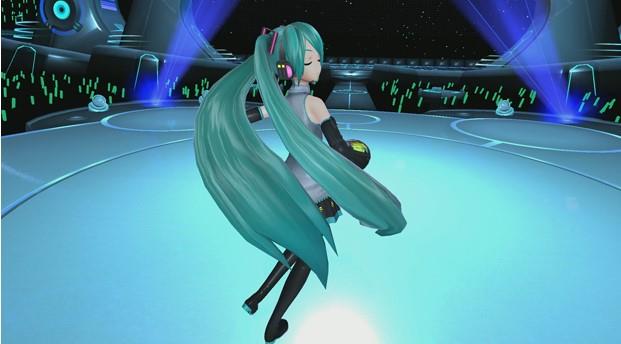 The seven songs per stage means that the experience is going to be over pretty quickly, it takes a little over thirty minutes to see everything, and whether it’s worth the fifteen dollar price tag is going to be up to each fan. Given that a ticket to a show like Miku Expo runs about the same cost as picking up all of the stages, and you can experience them whenever you like, the cost might be worth it. There’s a little bit of interactivity to it, it looks pretty damn cool as a showcase for how immersive an experience can be, but seeing your controller randomly drift off into space on a regular basis kind of ruins that. I’m torn on this, I was super excited at the prospect of it, but the final product is just too sterile an experience, and I feel like I might have a better time just playing the games on PS4 or Vita. A lot of people are going to be left shaking their heads in confusion at Hatsune Miku: VR Future Live, and others are just going to dive right in. I count myself among the latter, but don’t totally recommend this one.

Hatsune Miku: VR Future Live is a bit of an odd duck, it's not a game in the traditional sense, but it's an interesting experience. The PSVR seems like the perfect home for Hatsune Miku, hopefully we'll see a proper game in the future.