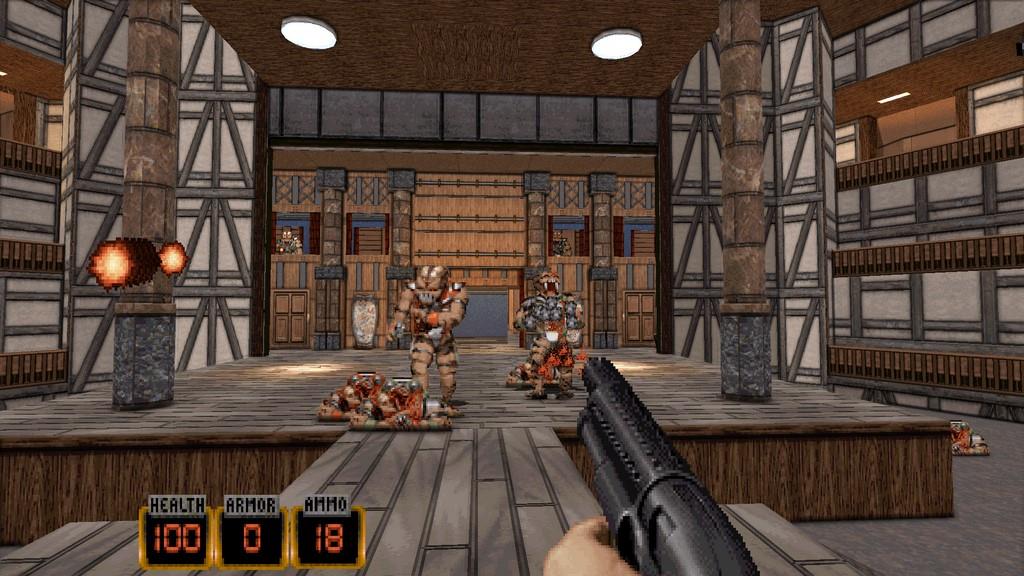 It seemed like the 90's were all about pushing as many boundaries as possible and seeing just how much everyone could get away with before someone stepped in and said "that's enough". The 90's were edgy, hell, just look at the WWF Attitude Era, or Jerry Springer, Mortal Kombat, Doom, Girls Gone Wild. Then there was Duke Nukem 3D. Ill never forget the first time I played Duke Nukem. My parents were pretty much okay with most of the things that I was into including Mortal Kombat and the WWF, but as soon as Duke flashed a stripper some cash and said "shake it baby", yup, that game was forever banned from my household. Here we are 20 years later and man, have things changed. One thing has not changed however and that is the how important Duke Nukem was to videogame history. Another thing that hasn't changed? This game is still amazing.

For those unaware, Duke Nukem 3D was one of the pioneers of First Person Shooters and paved the way for modern FPS games. Just like Doom, which you can draw a lot of comparison to because they are incredibly similar. There isn't much of a story here. In fact, the entirety of the story is essentially, kill anything that moves. Each level plays out like a labyrinth where you have to activate switches, collect keycards, kill enemies, find the exit, rinse wash repeat. Duke Nukem has been released so many times over the years that I really don't need to get into all the intricate details of the gameplay. You know what it is. What I do want to discuss however, is how this game will easily stand the test of time, probably forever.

Often when doing these kinds of reviews, the question I always ask is "how does it hold up today" and a lot of the time, the game in question will still be great but will feature old, outdated, control schemes or designs. This isn't the case with Duke Nukem because in my opinion, the design of this game is perfect. There is just something about this game and other classic FPS games like Doom that just can't be duplicated to this day. Hell, I could probably make the argument that these games are actually puzzle games since every level is laid out like a maze. That, in my opinion is what is so much fun about this game is that constant feeling of entering a new area, picking up new items, encountering new enemies and blowing said enemies away. Every gun packs a punch and every kill is incredibly satisfying. 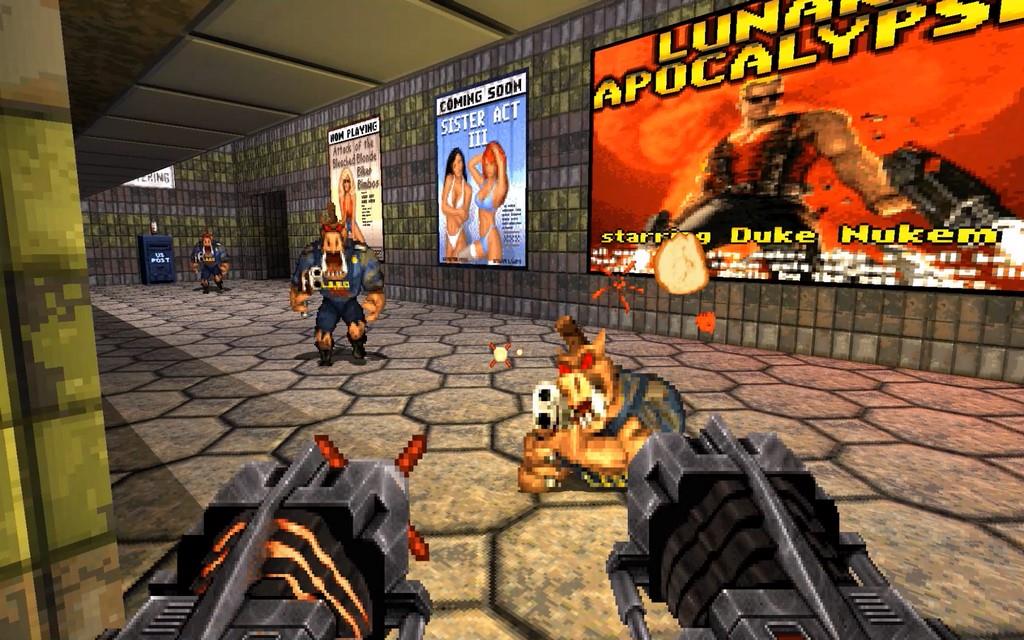 The other great thing about Duke Nukem is about how the game perfectly raises the difficulty just a bit as you progress through each level in the game. As you complete levels, you will start to notice that the game will slowly start to introduce newer and tougher enemies your way. The game will also start piling more enemies into the levels so you get to a point where you never know what is going to be behind the next door or around the next corner. You are low on health, ammo, armor and you have nothing in your inventory. You go through the next door, praying that there will be a health pack and... nope here are 10 pig cops that blow you away instantly. If you think the game is too easy, there are also multiple difficulty levels which will add harder and more enemies earlier in the game. I have so many of these levels completely memorized at this point and I think it's still as much fun knowing exactly what is coming up ahead as it is not knowing.

Even if you know what's coming, you still got the fight itself to worry about. Make sure you get your circle strafing down because you are gonna be doing it a lot, constantly dodging enemy fire from every direction. Thankfully, if you are playing this game for the first time and are having difficulty, you can utilize the rewind feature that will let you rewind to any point in time since the time you started the level. If you consider that cheating then you can utilize the save game feature that will let you save at any time. If you don't want to do any of that, you can always tough it out and replay the entire level. 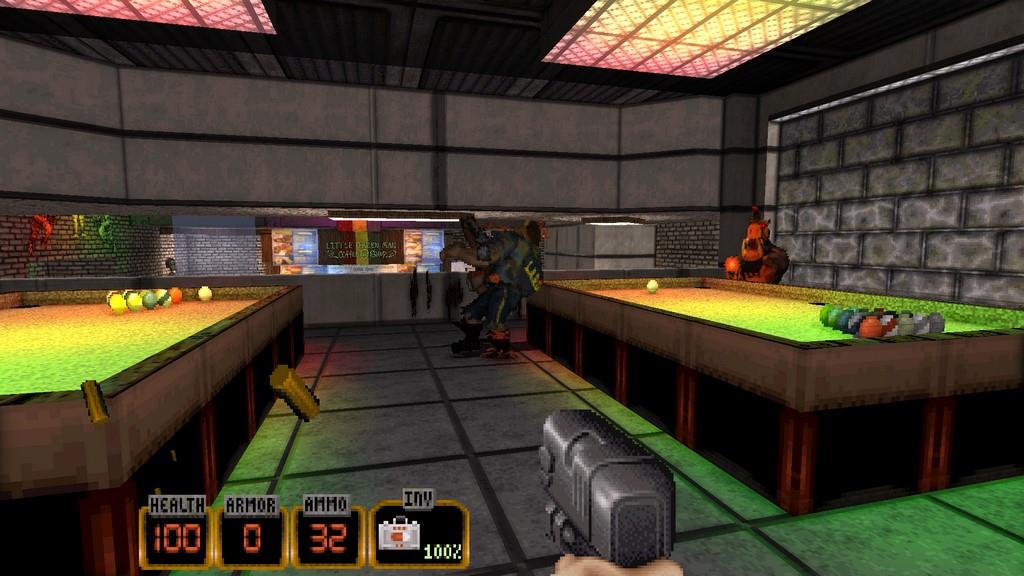 Now that I have raved about Duke Nukem 3D itself, the 20th Anniversary edition of the game comes with some extra goodies as well, but for those who have bought the game a bunch of times over, there probably isn't anything really here that will keep you interested or make you want to purchase the game again. For this edition there are new presentation settings including the option of picking between the classic HUD or a brand new one, which looks really nice and I opted to use the new one. There is also the option of using the brand new voice acting from Duke Nukem voice actor Jon St. John who has redone all of his lines in the game.

You can also opt for the classic voice over. The other cool addition is the option to play through the game with developers commentary enabled. Throughout each level you will see speech bubbles that you can click on that will give you short audio clips from the devs about certain parts of the game. This is pretty awesome in my opinion and I wish more games did this. It's such a joy to listen to these guys just talk about the design process. The one thing that will probably be the most inciting to Duke fans is the addition of a fifth episode which features levels that were designed by the original team members who worked on the original game 20 years ago. If you didn't tell me that these were brand new levels, I honestly wouldn't have known because these new levels fit perfectly within the original game and also add a new weapon to the game, the incinerator. The only complaint I really have to make about this re-release is that for whatever reason, the sound effects sound of lower quality that usual. Not exactly a game breaker but it is something worth mentioning.

Whether you love it or you hate it, Duke Nukem 3D was a groundbreaking, revolutionary game and is still a very important part of videogame history. The Duke Nukem 20th Anniversary Edition is a solid port of a fantastic game, but if you are a Duke fanatic that has already bought the game tons of times over, there probably isn't going to be much here to make you want to buy it again. For those who haven't played the game in a long time, or have never played the game before at all, this is a pretty good place to start. Duke Nukem 3D still holds up to this day, and aside from some weird sound issues, it's a pretty solid port of the classic game.

It's violent, it's lewd, it's offensive, it's Duke Nukem and it's amazing. Hail to the king, baby!