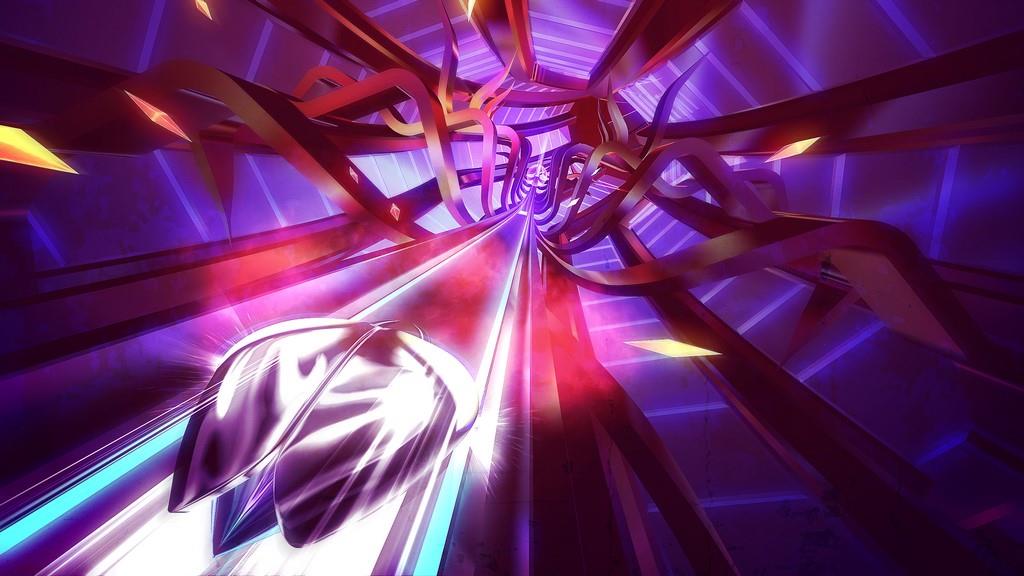 Sometimes it takes something really simple to sell me on a concept. And in the case of music games, things are rather complex these days, the latest Guitar Hero dropped a new control scheme on us, Rock Band is as hard as it’s ever been, and Konami’s music games continue to push the limits of human hand-eye coordination. So going into Thumper, I thought, ‘Here’s something nice to ease myself into, for when I need to relax or something.’ Then the game came around and reminded me that this is rhythm violence, nothing was going to be easy, especially after that deceptively simple tutorial that made up the first stage. No, Thumper is going to kick your ass, and this is one of those games that can totally get away with that and I’m fine with it.

You’re a beetle, flying along a rail, and there’s an enemy named Crakhed, who’s always there to try and stop you at the end of each increasingly difficult level. If there’s one thing Drool didn’t skimp on, it was the difficulty. And it’s a nice steady progression. Each level starts off teaching you a new core concept, and by the fourth level you’ll start to see some flashes of games past that the ex-Harmonix devs worked on. All the while the steady drum beat marches on, giving you a feeling that this is what you need to anchor yourself to at all times, lest you slam into a wall. The punishing difficulty is offset by the game’s very liberal checkpoint system. If you find yourself stuck in an area, you’re going to be hitting your head against a wall at times, but should you choose to leave and come back, that challenge is ready to pick up right where you left off, and considering how long some of these levels can get, it is doubly appreciated.

Thumper’s controls are rather simple as well, with only the X button in play, and the analog stick (or face buttons if you choose). X allows you to tap the beats that appear in the lane, and augments your turns so you can go sliding around corners. Tapping up and X allows you to clear obstacles set in your path, and the smart design of both the music and the physical tracks gives you ample time to see what’s coming and tap out the rhythm the game expects you to deliver. Should you happen to hit a wall or barricade of some type, you can always regenerate your little beetle shield at the end of a section. This game ultimately is difficult, but fair, and it’s the type of game where after you screw up, you can get down on yourself, because you know you can do better, you know you can beat this, and that winds up leading to sessions lasting much longer than you possibly expected. Hell, as I type this, it’s a little after one in the morning, I got so lost in trying to clear the last stage before writing this that I lost track of time before ultimately giving up, for now.

Thumper’s visuals are striking to say the least. Your space beetle avatar carries a nice sheen to it, while flying through some of the most colorful visuals out there. It’s nothing that’s going to showcase the power of the PS4, but it is damn nice to look at. Just watching the track unfold around you, as tendrils unfurl from the track, and enemies fly around you evokes a sense of serene beauty that comes crashing down as the drum beat relentlessly pounds on. The ‘freedom’ of playing this game in VR is also interesting, since you can look around a bit more freely, just be careful that you’re not the type of player to lean into your experience too much, lest you lose sight of the track. The music of Thumper is also a big draw, with a lot of industrial clangs and drum beats, this game conveys power through music, and it needs to be heard on the best possible systems. Headphones are great and all, but surround sound is really the best way to experience this, especially if you’re in VR. 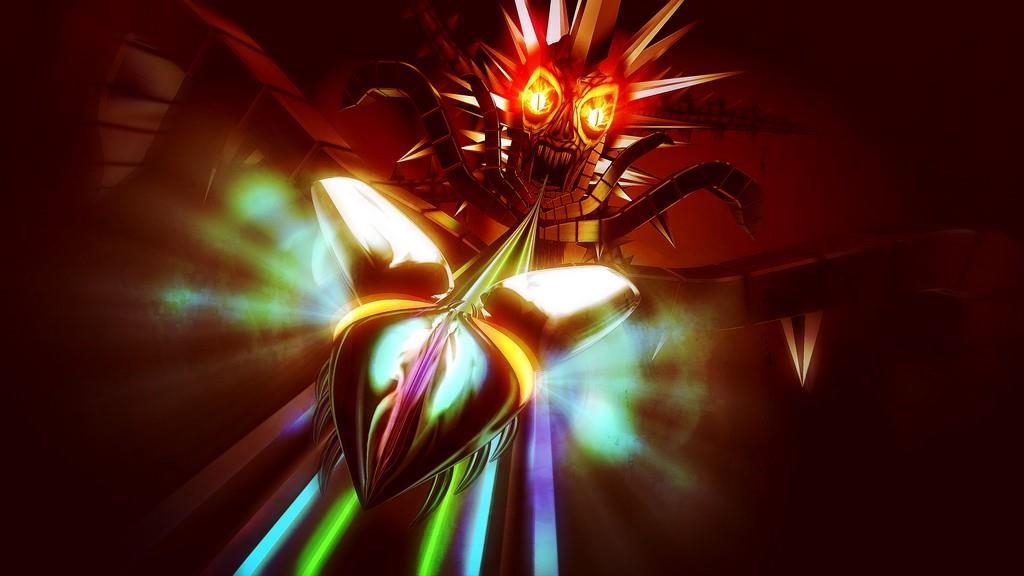 As a launch title for the PSVR, and between this and Rez Infinite, music game fans are definitely in for a treat. The team at Drool has done a great job of taking the simple concept of that old handheld game, Simon, and using their existing knowledge of music games to create a memorable title that appears insurmountable at times, but when you see that explosion, and Crakhed is no more, it’s a rush that isn’t replicated by many games. Even without the PSVR experience, Thumper is a game that is a must for any PS4 library, simply because there’s nothing else like it on the gaming landscape right now.

Thumper isn't just a great PSVR launch title, it's a great game overall. It doesn't pull any punches, and is relentless in its 'rhythm violence' and that makes it one of the most satisfying games out there. Now to try and S rank these songs.