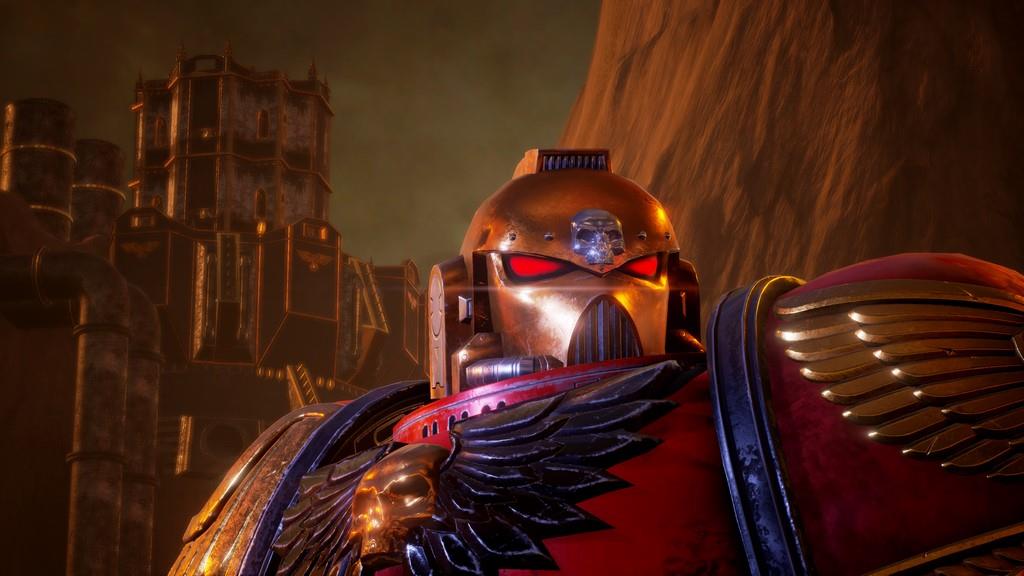 Up until recently the only Warhammer I had experienced was binge watching the amazing CGI cuts scenes on Youtube. Due to this I was able to experience Eternal Crusade from the eyes of a scrub. The game does a great job at delivering a universe wracked with turmoil and anomalies. The MMO does a fantastic job at delivering content to new and old fans alike. Players have a wide range of factions to choose from. The Space Marines, the infamous Chaos Marines, Eldars and Orks. Although the game is released, some factions are yet to be fully utilized by the developers. The Orks especially.

The Eternal Crusade is set on Arkhona, a planet in the center of a void of systems on the edge of Segmentum Obscuras called Kharon system. A few thousand years ago mankind covered the entire planet but recently representatives from Ordos Xenos visited the planet to find its inhabitants obliterated. If none of that makes sense to you, as it didn’t to me before I did my homework, have no fear. Take it as a good omen. An omen prophesizing the victory of mankind under the Emperor. Or take it as a sign that the Warhammer universe has a rich interstellar universe full of heroes, villains and stories waiting to be explored. Something I feel this game certainly does deliver on.

Our story begins after the loss of the Inquisitors. Factions vie for control of the planet located in a system with three suns locked in orbit. Imagine that for a supernova. Each map is around the same size as a map from the Battlefield series. Players are introduced to the planet via The War Map. At the moment The War Map is just a place to view territories controlled by the different factions. However there are talks that eventually players will be able to coordinate meaningful attacks in particular states. At the moment however players cannot choose which map to play on. Instead they are assigned to maps. This doesn't feel great considering the game was in Early Access for months. I would have preferred if the developers had simply left The War Map out until it was polished. You can expect to see the game stagger frequently in this fashion. Where the Warhammer universe should shine in exquisite majesty, the game holds it back through unpolished work and poorly implemented mechanics. Have faith in the Emperor, Space Marines. Perhaps we will see such majesty with future updates.

Each of the major factions have their own particular chapters and parties. I think the factions and their individual choices are a great representation of combat within the Warhammer universe. Troops with low powered ranged weapons come equipped with high powered melee weapons and vice versa. I like that it’s not just a firefight, and that friendly fire is also to be considered before pulling the trigger. Once melee units get close to their ranged counterparts the contrast is violent and ferocious. The friendly fire mechanic makes it impossible to spray and prey when the brawl kicks off. When playing as a faction the player can choose a loadout befitting the various chapters and parties of the universes lore. As a Space Marine players can choose from Ultramarines, Blood Angels, Dark Angels, Space Wolves and Imperial Fists. The other races are populated by factions equally as important to the lore.And it isn’t just the Space Marines. Those of us ignorant to the light of the Emperor should take the time to read up on the factons of each race. It’s important to fight in numbers, or to make use of the numerous upgrades players unlock with the in game currency. This in game-currency is not to be confused with Rogue Trader Credits, the games paid-for currency. At the moment the premium weapons don’t seem to deliver a huge advantage over the weapons purchased with the in-game currency. 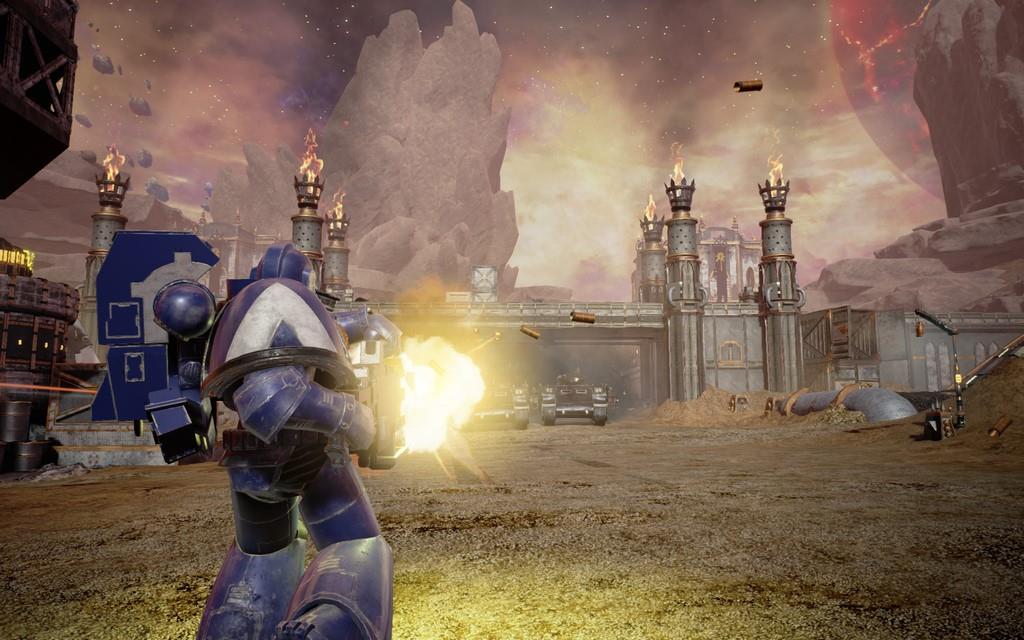 So! Lets recap; we’re on planet in a solar system with three suns, its population massacred, the genetically modified super soldiers sent in to stabilize the planet were also slaughtered and now multiple races vie for control of the planet’s surface in brutal and violent combat.

Each faction, whether it be the Ulatramarines, Night Lords or Deathskulls, have their own military traditions and histories within the Warhammer universe. It’s important to be aware of the epic deeds and valiant efforts of the factions we choose from. From this knowledge comes a fantastic Warhammer experience enjoyed by both new and loyal fans. Without it, it’s just a clunky MMO shooter. Earlier I said the maps used are around the size of those seen in Battlefield games? To navigate these maps vehicles are provided in game. At the moment there are only APC’s and tanks available which are little more than glorified taxi’s. As the developers have put it the game is 90% pvp and 10% pve. There are some instances where players can join a squad to eradicate the Tyranid infection from ‘dungeons’. That’s it though. That’s all the pve so far. It looks like the developers want to kepe it pvp focused. I can appreciate that, but I’d like if at some stage in the future there are some enhanced PVE events pertaining to the universes lore.

Aesthetically the game stumbles heavily on clubbed feet. It looks good, if it were a game brought out in the middle of the PS3/Xbox 360 life cycle. Although the race factions are individualized through the lore of the universe, their character models are pretty bland. The character animations are boring. Even the awesome jetpack, yes the jetpacks, look as clumsy as a donkey after a bottle of moonshine. Melee weapons are dominant due to the awkward cover system, friendly fire and slightly unbalanced weapons.

It is the small things which hold it back, which is also the annoying part about it. Why a game that spent so much time in Early Access on Steam, with a rich universe to draw from can be so unpleasant to play is stupendously frustrating. Instead of wanting to play just one more match in the small hours of the morning, I was forced to bear and grin the unjust torment. In defense of Eternal Crusade I really enjoyed playing as different factions and races. It was spectacular to dive into a universe rich with history and tragedy combined with the violent combat I expect from a Warhammer game.

You have to wonder what could have been when playing Eternal Crusade as the game has some bright spots but the sum is not nearly what you get when adding up the parts.