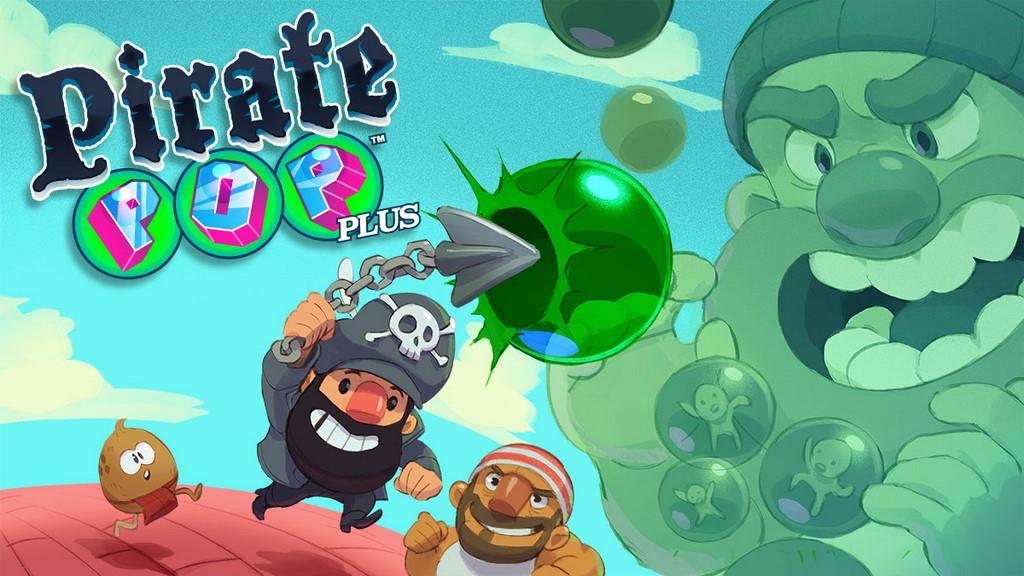 Over the past several years we’ve seen a lot of indy and homebrew games made in the 8-bit style of classic systems such as the NES and Sega Master System and have seen some pretty good success.  Games such as Battle Kid, Axiom Verge, and Mighty Gunvolt not only look like classic games but offer similar challenges as well.  However, there aren’t too many games that will take that one step further…or backwards in a technological sense, and replicate the look and feel of a classic handheld game.  There are a few here and there but not nearly as many as their 8-bit counterparts.  Today I’m taking a look at Pirate Pop Plus on Steam to see if something so simple can work in today’s world of 3D gaming.

Pirate Pop Plus is described as a mix between the classic arcade game Pang (also known as Buster Bros.) and a Mega Man boss.  When you first start the game you’ll notice that it bears a striking resemblance to a classic Game Boy game with its green and black color scheme.  The game’s frame also looks like an old Game and Watch game for those who remember those.  Pressing the buttons mapped to the D-Pad and action buttons will make the buttons move on the frame, similar to if you were actually holding the system in your hands.  While it’s just an aesthetic thing, It makes it look like you’re playing an older handheld gaming system.

As for the game itself, you play as Pete Jr. as you shoot a grappling hook to pop bubbles thrown at you by a pirate who appears in the center of the screen from time to time known as the Bubble Pirate.  The bubbles start off a one giant bubble but once you pop it, the bubble splits into two smaller bubbles.  Hitting one of those will split it again, before one more hit will pop it for good.  Once you’ve had some time to deal with the bubbles on screen, the Bubble Pirate will pop up again and throw more at you, but he’ll also come along and activate some magnets along the walls, ceiling, and floor.  This is where the “Mega Man boss” aspect comes in as the gravity will change depending on which magnets activate.

Since this is a classic-arcade-style game, Pirate Pop Plus is all about obtaining a high score.  As you continue to pop bubbles with your grappling hook you’ll begin to notice numbers coming off of them such as x2, x3, and so on.  So long as you pop a bubble without missing a shot, this multiplier will continue to increase until you miss a shot.  This is probably the most effective way to increase your score, but not the only way, nor is it the only way to pop bubbles.  As stated earlier the Bubble Pirate will occasionally come along and change gravity.  As you get drawn in another direction, you can actually bounce on any bubbles you come across to score more points and the more you jump on before hitting the ground, the higher your score, similar to the classic Super Mario Bros. games.  Keep in mind though that you can’t jump, so this is the only way to bounce on the bubbles.

Thankfully, your grappling hook isn’t the only weapon you have…well, sort of.  As you play you’ll get the occasional item drop such as fruit to increase your score, temporary invincibility, a clock to stop time for a few moments, hearts to replenish your life, and a couple of power-ups which are very similar to those in Pang.  One such power-up will allow you to shoot multiple grappling hooks and will attach to the other side of the screen and wait for something to run into it (the normal hook will disappear when it hits the other side).  Another power-up forgoes the grappling hook altogether and gives you a machine gun with limited ammo, each pickup giving you fifty shots.  I’m honestly not sure what determines when items drop and what they do drop, but I had one game in which I had the machine gun and just kept getting ammo drops to where I had around two hundred shots. 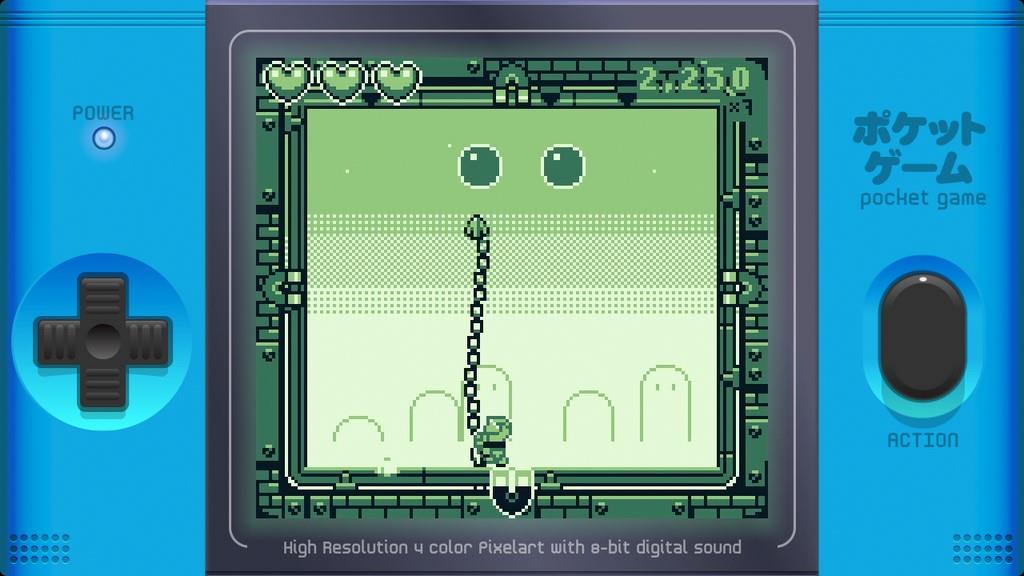 There’s one more item you can get and it’s probably the most important item in the game: coins.  Coins can be obtained throughout the game in a couple of ways, such as a random drop or by shooting the Bubble Pirate when he pops up from time to time (and you have to be quick, he doesn’t stick around for long), but the easiest way to get coins is by just playing the game.  After the game is over you’ll get to put your initials into a high score table if you scored high enough, just like a classic arcade game.  However, depending on how you did you’ll also get a certain number of coins, and the coins have two uses.  The first is spending them in the shop.  Most of the items are purely aesthetic such as different colored faceplates, backlighting, and d-pad colors, but you can also purchase a few more characters, each of which have their own stats to help change up the game a bit.

The second use for coins is…well, getting more coins, but at a steep cost.  When you start playing you have two modes: Normal and Hyper.  Normal mode is just your standard game.  Hyper mode however will double the difficulty but also double the points you’ll score, and as stated earlier the higher the score you obtain, the more coins you get.  However, there are two catches to this: it costs twenty-five coins to play Hyper mode and you only get one heart.  While the game doesn’t start out any harder, the difficulty does increase a little quicker than the normal game.  I did luck out though and get a couple of treasure chest drops which contain around ten coins each, so that combined with my pitiful score actually netted me around twenty coins. 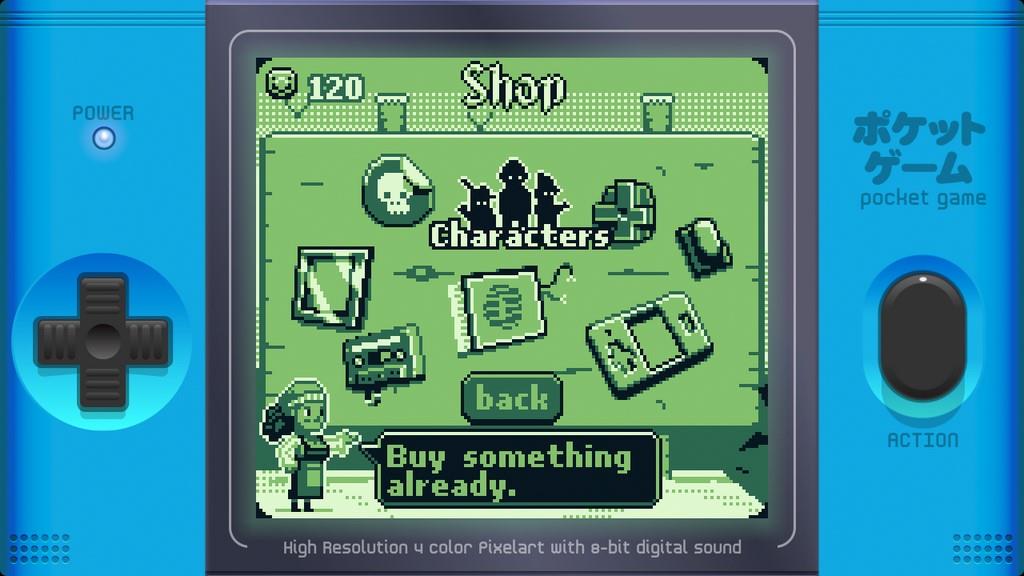 Pirate Pop Plus is pretty enjoyable if you’re like me and enjoy games from the classic handheld systems.  There really aren’t too many flaws with it but the one that people will likely bring up is that there’s not much to it.  The game does have achievements to obtain, but unless you know how to get them you have to spend coins to unlock hints on how to obtain them.  You can’t even look at them on your Steam library page to see how to get them; they just give a description of the item the achievement represents.  The other problem people might have is that the game is really short.  From what I’ve played there doesn’t seem to be an end game.  I’ve hit the Bubble Pirate multiple times and it seem that he never permanently goes away.

For five dollars you’re getting a game that plays like a classic arcade game, but if that’s not your cup of tea you might want to hold off on this one.  If you’re someone who wants a game with a lot of longevity where you’re not just doing the same things over and over again, five dollars might seem like a lot.  On the flip side of that, Pirate Pop Plus is still really enjoyable and it doesn’t take that long to go through a full session, but even Pang had on going levels where things changed now and then.  While PPP does have levels, nothing really seems to change outside of the difficulty going up, unless it changes further down the line than the stages I got to.  Bottom line, if you’re looking for some classic arcade-style fun, Pirate Pop Plus is definitely one to pick up.

Pirate Pop Plus is a game where fans of the classics will likely enjoy it, especially fans of Pang and Buster Bros.  If you’re not normally fan of arcade-style games, you might want to check out Pang first, then decide if five dollars is worth spending on a game that resembles Pang with a couple of other mechanics thrown in.