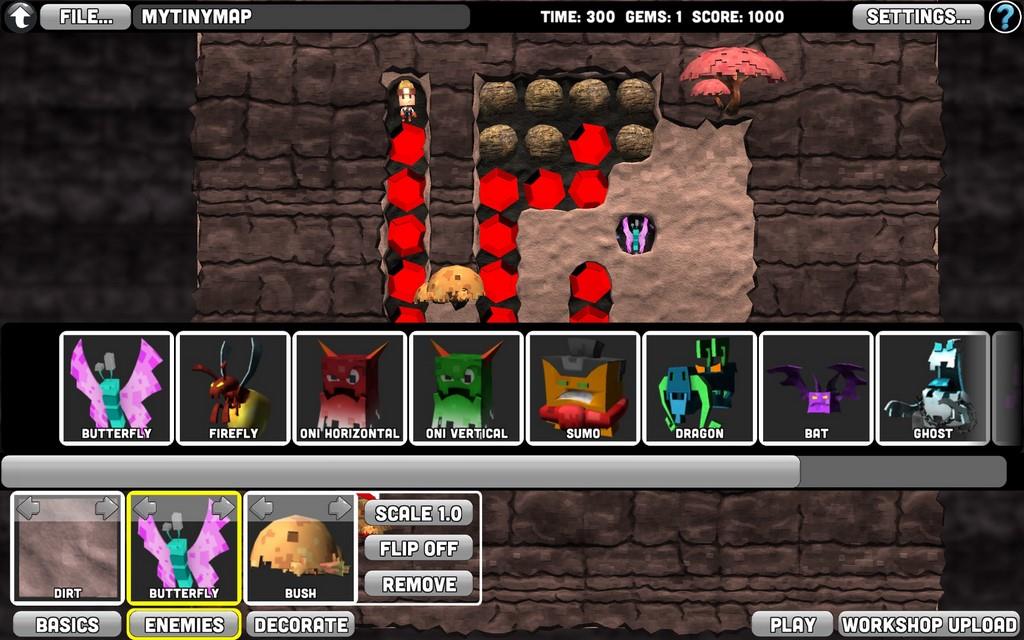 Boulder Dash is a classic game that I wasn’t too familiar with other than that it had been around since 1984.  I’ve only played the NES version and quite frankly it wasn’t my best game.  I didn’t know back then that Boulder Dash was released on multiple computer systems and consoles including the NES, Game Boy, Amstrad, Amiga, and just about any other classic console and computer you can think of.  Two years ago Boulder Dash 30th Anniversary was released for iOS and Android to celebrate thirty years of Boulder Dash, and now that same version has arrived on PCs and Mac.  Today I’m taking a trip back in time with Boulder Dash 30th Anniversary on Steam.

If you’ve never played Boulder Dash, it’s a simple concept for a puzzle game; you play as a man named Rockford as you dig your way through multiple caves while gathering gems and finding the exit.  The game takes place from a top-down view meaning you can move in any of four directions, but strangely the gems, boulders, and stones you find can fall down on top of you and the latter two can crush you.  Beyond that, the game has three different ways to play: without a timer for more casual play, with a timer if you like the classic Boulder Dash, and making it so the gems can crush you as well if they fall on top of you for the truly sadistic…actually it’s not really all that bad, it just takes some different thinking to solve the puzzles.  There’s also a level editor where you can create new levels and download others from the Steam Workshop.  However, I’m not very creative when it comes to making new levels so I stuck with the ones that came with the game, but you can create whatever you wish within the confines of a 24x24 grid and change the stage settings however you wish.

The game is split up into multiple worlds with about twenty puzzles in each.  The first world acts as a tutorial for those who have never played Boulder Dash, or if you just need a refresher.  That being said, the first world is rather easy as it eases you into the game’s mechanics and power-ups which range from dynamite to blow up rocks and certain walls, to freezing the action on screen for a few moments to allow you to get around enemies or even ignore gravity for boulders so you can push them out of your way easier.  Each of these power-ups have a limited use though so you have to save them for when you really need them, especially the dynamite.  Quite a few times I’ve hastily used a stick of dynamite before realizing I didn’t need to.

As you dig through the caves you’ll come across the occasional chest.  Once you complete a stage the chests will open and can contain many types of items from power-ups to special items used to unlock new characters to gold bars which can be used if you mess up in a stage or they can be used to purchase new characters.  Some chests can include two or three items while some rare chests can have up to ten items inside.  If you know where the chests are in a stage, simply replay the stage to rack up some items, especially the power-ups.  As far as I can tell, the chests are re-collectable and in the same spots in each stage.  However, that means that you may have to grind a bit to get more power-ups and to get higher scores on a lot of stages, you might have to use those power-ups quite a bit, so this can get a bit tedious. 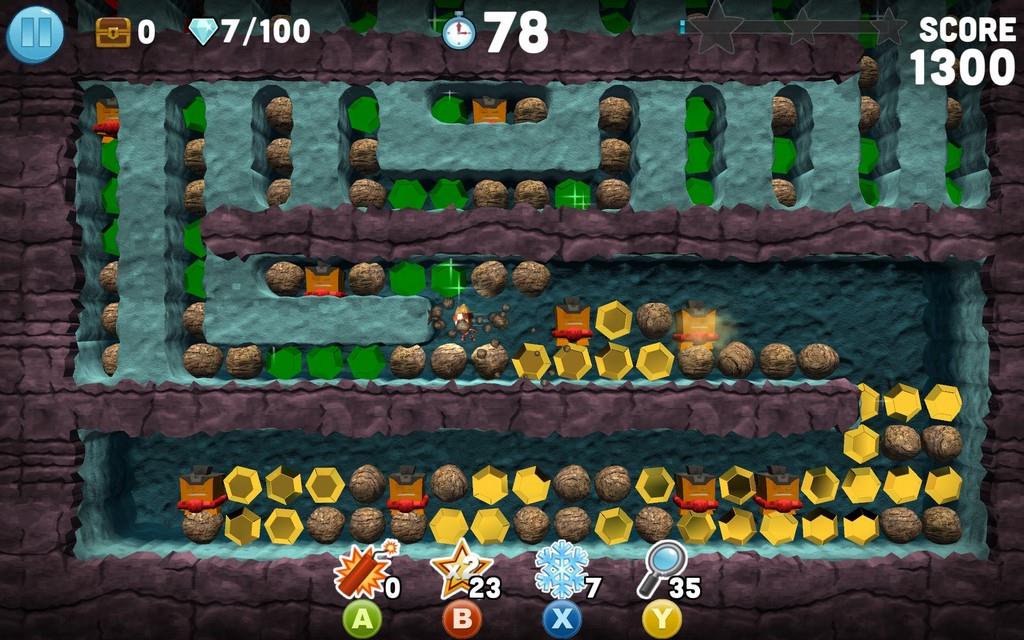 Each of the characters have their own special traits…well, except for Rockford himself as he’s pretty much your standard run of the mill cave digger.  Other characters will give bonuses such as more speed, which honestly sometimes isn’t too noticeable.  I didn’t have the chance to unlock everyone as some characters require a lot of item grinding to get what’s required to unlock them, so some of them might have better and more noticeable abilities.  As stated you can use gold bars to unlock some characters, but also to revive you while in a cave.  If you get crushed or run out of time in a cave, you can spend a couple of gold bars to keep going, or you can opt to just restart the cave entirely.  I tend to just restart the cave not only because it lets me keep the gold bars to unlock characters, but any items you used in the cave are reset if you restart it.

While the main goal is to get through each cave, you won’t get very far if you just make a beeline for the exit and the reason for this is two-fold.  First, each stage requires a certain number of gems to collect to open the exit.  Most of the time there are more gems than the amount required, sometimes out in the open and sometimes certain enemies will turn into gems when defeated.  However, the second reason is that you can earn up to three stars in each cave depending on your score for that cave.  Later worlds require a certain number of stars to open up.  Getting three stars in each stage of the first world isn’t all that difficult as long as you try.  Once you hit the later stages though, you’ll have to find some creative ways to score more points to earn those stars.

Boulder Dash 30th Anniversary has a very arcade-like feel to it which makes sense considering that the series debuted back in 1984.  It starts out simple to ease you into the game before throwing anything really difficult at you.  Graphically the game’s okay.  I was expecting a bit more in terms of modern graphics, but what we got is okay, especially considering that this game first came out two years ago on mobile devices, so you have to go with what works.  I really don’t have many nitpicks about the game aside from the occasional loot grinding, but there is one in particular I need to briefly address: the controls. 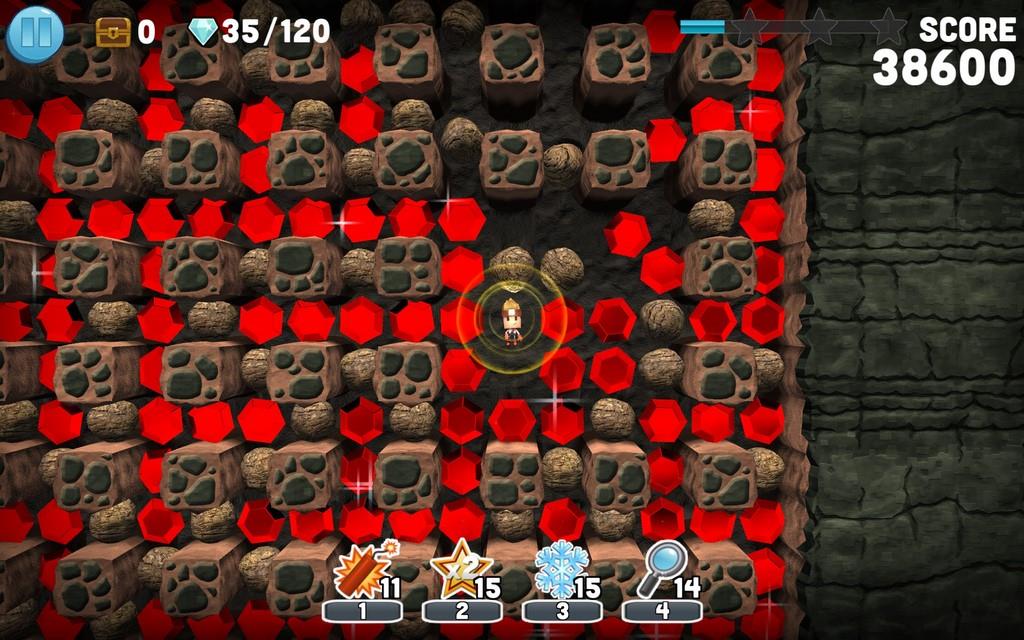 I mentioned earlier that you can move in four directions.  That’s fine and it makes sense, but the issue lies in trying to change directions too quickly.  Picture each cave on a grid and when you hit a direction on your controller or keyboard, you move one grid space in that direction.  Now let’s say you’re moving to the right and you decide to go down at an upcoming block so as you approach it you hold down.  The problem is that if you haven’t moved fully into the upcoming grid square you’ll double back to the space you just came from before going down.  This is quite the nuance and has caused quite a bit of frustration as I’m trying to get through a cave as quickly as I can and I just happen to change directions too quickly and end up getting crushed because of it.

Overall though, Boulder Dash 30th Anniversary is an enjoyable game, especially for those who liked the older arcade games of the 80s.  The game starts out rather easy but begins to get more difficult after the first world.  It also pushes you to do your best on each stage instead of just gunning for the exit since you have to earn enough stars to open up the later worlds.  If you need an even harder challenge, the two DLC packs currently available should take care of that with classic levels from 1984 as well as some new incredibly difficult stages (both packs can be previewed in the main game).  If you’re into arcade-style puzzle games, you’ll likely enjoy Boulder Dash.

Boulder Dash 30th Anniversary is a great way to celebrate Rockford’s thirty year trek through the caves.  While the game looks like it belongs on a mobile device (which makes sense given this was originally released on iOS and Android) and the controls could be a bit tighter, the game offers up plenty of challenge even within the early worlds.  Fans of arcade-style puzzle games will definitely want to dig into this one.