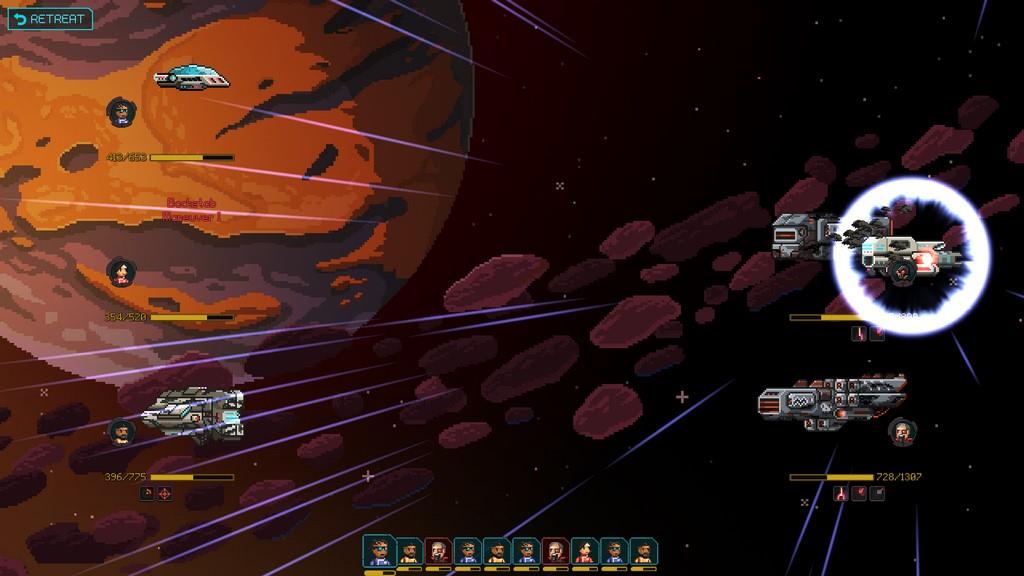 Fans of science fiction gaming have taken a bit of a drubbing this year. Star Citizen, once the beacon of hope for scifi simulation gaming, has disappeared into a black hole of broken promises and crowdfunding misappropriation. No Man’s Sky dropped out of hyperspace not with a bang but with a tepid, squeaky farting noise, missing dozens of promised features (not the least of which was multiplayer) and carrying a star freighter’s worth of crashes and optimization issues. After being publicly criticized by publishing partner and Sony exec Shuhei Yoshida for overpromising, the game’s developers went social media MIA. Even Mass Effect, once the paragon of scifi gaming, seems content to issue delays for the long-promised Andromeda and occasionally drop trailers full of hype but devoid of gameplay.

Mind you, fans of dystopian scifi have been well taken care of, with Deus Ex Mankind Divided and of course hefty updates still dropping for Fallout 4. But what if you crave something a bit less depressing? Something more optimistic, dare I say cosmic? Well then, perhaps I can direct your attention to Halcyon 6: Starbase Commander. Here’s a plucky little indie title from studio Massive Damage, a developer that delivered its promised game on time, under budget and didn’t blow its donation money on stuffed crust pizza and illicit pharmaceuticals. What’s more, Massive Damage put the game out on Steam Early Access, so that fans could test-drive it for a small fee and give invaluable feedback during development.

In concept, the mere existence of Halcyon 6 might seem charmingly naïve in a post-Broken Age and Mighty No. 9 indie gaming scene. No missing features, no bait-and-switch Kickstarter shenanigans, no disappearing developers. Halcyon 6 is an honest-to-God  scifi strategy RPG that came out humble yet polished, not horribly broken. That in and of itself is a minor miracle when you consider that the basic HD remaster of decade-old Bioshock dropped in mid-August, with less graphics options and more bugs than the original game did in 2007. It’s even more miraculous that Halcyon 6 is a pretty amazing little title in its own right.

The story is straightforward, but recalls the glory days of Mass Effect, Wing Commander and Freelancer. In the distant future humans have established the Terran Republic across the stars, thanks in part to an ancient derelict space station named Halcyon 6. Humans have used the mysterious technology of this station to advance and spread prosperity across the cosmos, but a relentless new alien menace, the Chruul, have appeared from outside known space and are laying waste to the once-thriving Terran colonies.

With the Terran fleet in ruins, the human race on the brink of extinction and your commanding officer dead, it’s up to you to rally the scattered Terran forces and unlock the secrets of Halcyon 6. Its hidden power is your last hope to save what’s left of humanity and fend off the Chruul, not to mention space pirates and other hostile factions who smell blood in the water. 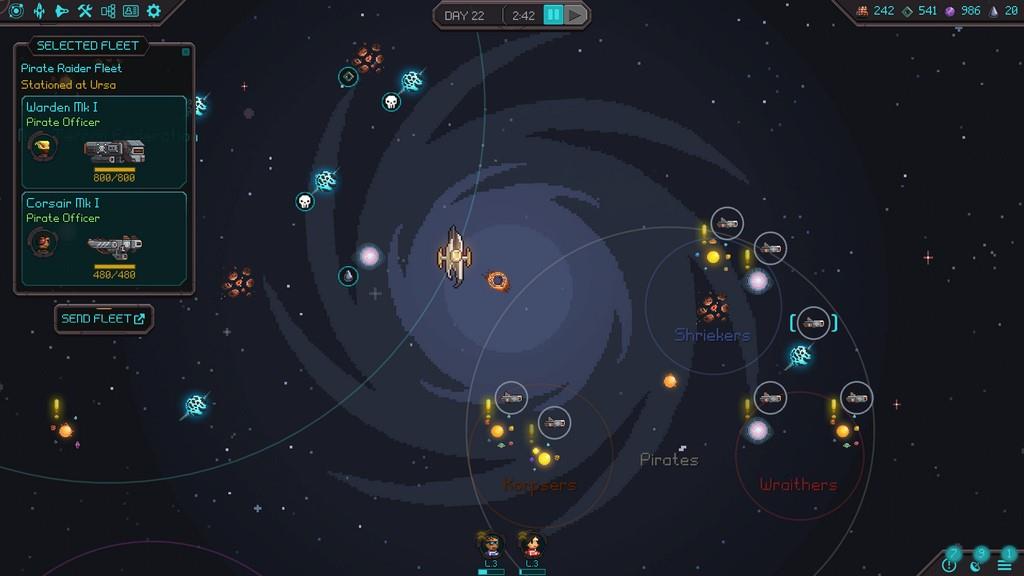 It’s an invigorating start to a scifi RPG as you watch the Terran fleet go down in flames during their first encounter with the Chruul. As the admiral’s ship burned after a valiant space battle, I got the same desperate feeling I had back in 2007 when the Reaper menace first showed itself in Mass Effect. Halcyon 6 balances this dread with lighthearted lore and a rather self-referential sense of humor. Once I got past the initial dire start I realized to my relief that this game has more in common with Douglas Adams than it does with Commander Shepherd. There are a lot of subtle, amusing references for longtime fans of science fiction films and books. Star Trek fans in particular will appreciate the winks and nods to both the Trek canon and aesthetic, as it feels like you’re serving in a slightly more playful and tongue-in-cheek version of Starfleet.

In terms of gameplay, Halcyon 6 is both complex and elegant, marrying several complimentary genres into one effective scifi experience. At its core the gameplay is appropriately centered on the Halcyon 6 space station. You start the game with no fleet, a weary skeleton crew and a damaged, mostly unexplored station. As you send search parties out to reclaim dark sectors of the station you will gain resources and open up areas for building tech; fans of the XCOM series will find this very familiar. This opens up the ability to construct starships, train and promote crewmembers to command said ships and build factories that make the station more self-sufficient.

At the start however you will have a mere pittance to work with, so building resources quickly is imperative. Resource management is broken up into salvage for building, dark matter to fuel hyperdrives, crewmembers to man stations, and energy, which is provided by generators and needs to be managed in and of itself. With such scarcity at the beginning of the game you will have to build a ship quickly and make contact with local mines and colonies. These outposts are understandably nervous with all the pirates and hostile aliens around and they’d prefer to just evacuate to your station, but if you promise to protect them they will stay at their post and provide you with resources and fresh recruits. 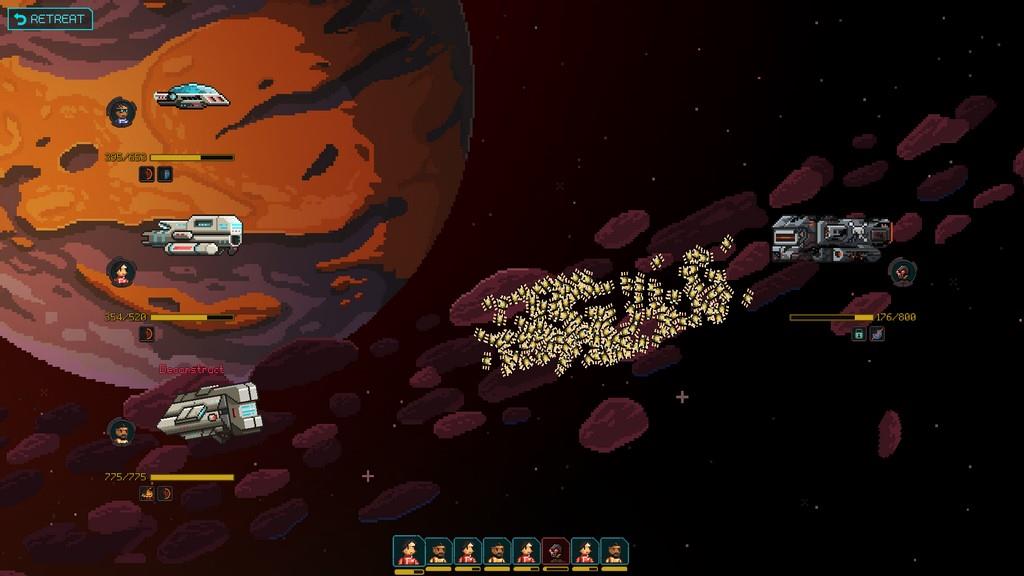 To be honest this was the only drag I ran into because it makes the beginning of the game slow-going. You can’t establish regular trade routes to these outposts so you must send ships to shuttle supplies back and forth, and once an outpost mines to capacity they won’t mine any more until you do a grocery run and pick up what they already have. This was tricky early on because I only had a couple ships built with my paltry starting supplies, so having them running errands left my station vulnerable to pirates. This was a pretty big concern because the galaxy map plays out in real-time.

Like any good RTS, Halcyon 6’s main map can be paused, resumed or fast-forwarded at will which allows strategic flexibility. For example let’s say that your ships are off collecting resources and exploring new solar systems when some space pirates come knocking. That abandoned dark matter outpost might look tempting but it’s a better idea to reroute your tactical starship to return home before the pirates break down your door and do a lot of damage to the station. The same can be said of balancing exploration against defending your more vulnerable outposts. The galaxy map adds a substantial layer of risk-reward strategy.

The combat, however, couldn’t be farther from an RTS, which I really appreciated because RTS combat has always felt impersonal and more than a little bit “go outside and play with your friends” antisocial to me. Instead of faceless, hapless little troops and tanks milling about on a tin-soldier diorama you get a very solid turn-based combat system in Halcyon 6. This applies to both starship and ground combat. It’s nothing groundbreaking—the similarities to Final Fantasy are pretty obvious—but it’s a refreshing change from the RTS galaxy map. In space you’ll usually command a fleet whereas on foot you have an officer flanked by a couple redshirts, but the same mechanics apply. 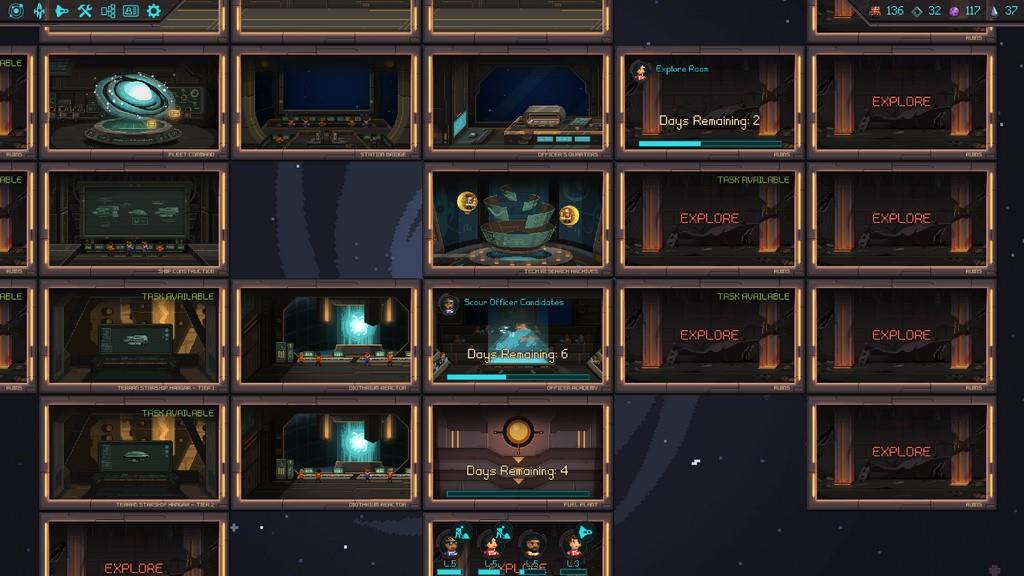 As expected you’ll take turns deploying attacks and special moves against your enemies, and different officer classes have different special abilities while your redshirts have pretty basic attacks. Like I said it’s nothing phenomenally innovative but it works and generally feels more flexible than the standard five-man-band JRPG party setup. The double-edged sword on that is you can actually lose crewmembers in the field. A dead redshirt appropriately isn’t a huge deal and will diminish your overall crew count, but losing an officer feels like Spock or Geordie just abruptly bit the dust on a random away mission, especially if you’ve gotten to know that officer over a long stretch of the game. It helps that Halcyon 6 does a good job of randomizing its unique characters and providing them with amusing, compelling names and backstories so each promotion and addition feels significant, and each loss hurts.

There’s also a real aspect of mystery and exploration to the game as missions are, to an extent, procedurally generated. This isn’t the pie-in-the-sky letdown kind of procedural generation from Star Citizen or No Man’s Sky but a very workmanlike, randomly-generated system of missions and planets. It reminds me of a roguelike but without the whole “start from the beginning when you die” bit. This randomness adds a genuine sense of the unknown to the galaxy and compelled me to take that extra risk and go that extra lightyear to land on that uncharted planet at the edge of space. It’s such a compelling mechanic that I can’t believe there hasn’t been a Star Trek game in recent memory that has done it, outside of maybe Star Trek Online.

Speaking of Star Trek, Halcyon 6 shares a lot in common with the older Trek games in terms of production values. I’m not talking Elite Force or Bridge Commander but even older, as in the Interplay point-and-click adventures. Upon booting up Halcyon 6 and visiting my station’s control center I was immediately reminded of the Enterprise bridge from Star Trek 25th Anniversary or Judgement Rights. The sprite art in Halcyon 6 is very 90s but it’s beautifully done and distinct, like someone took a modern Mass Effect-influenced spin on those old DOS Star Trek games. The music has that tasty wavesynth midi flavor as well and fits the art style beautifully. 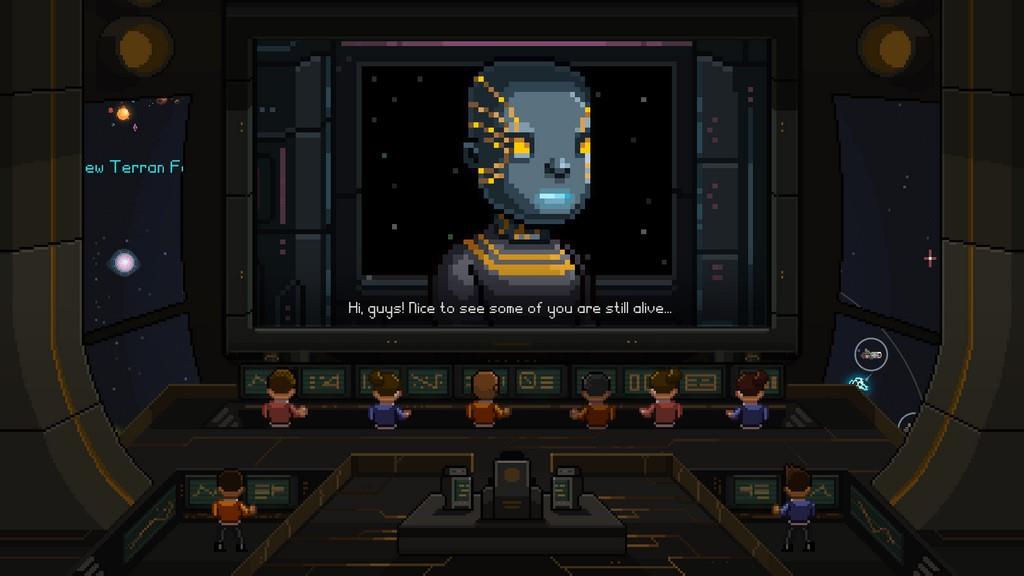 To be honest I’m just scratching the surface of Halcyon 6; I’ve only covered the very basics of gameplay, mechanics and plot in this review. By going retro (and doing it well, I must stress), studio Massive Damage allowed themselves to pack the game with content and really flesh out its universe. This game is huge and for $20 you get a hybrid RTS-RPG with exploration elements and a compelling original universe and story. If you want broken promises and an overpriced desktop wallpaper generator, get No Man’s Sky. But if you want an RPG and a scifi story you can sink your teeth into, Halcyon 6: Starbase Commander is your game.

An addictive mix of strategy, RPG, exploration and storytelling, Halcyon 6 is slow to start but should satisfy anyone craving a deep, retro-affectionate science fiction adventure.