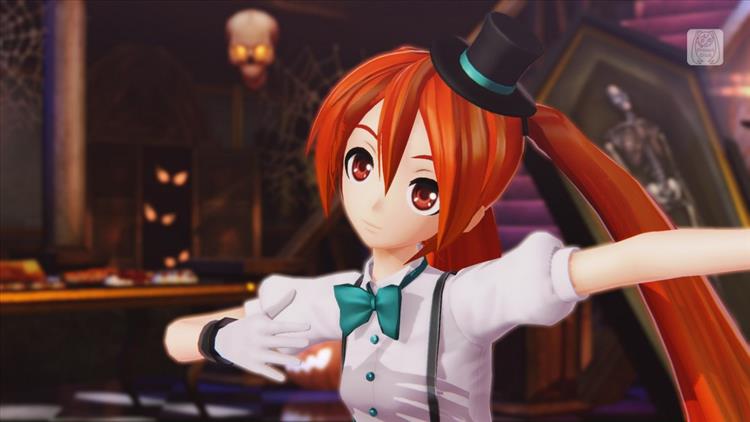 I think at this point I might be all Miku’d out. Even though we’ve been receiving Project Diva games at a good yearly clip, this might be the one that breaks my fandom of the series. It’s not that the music is bad, or that the gameplay has lost any of its luster, instead it’s due to the change in gameplay mechanics that forces players to endure a roulette of module chasing, while cutting the songlist down significantly. Does this mean that Hatsune Miku: Project Diva X is a bad game? Not by any means, but it definitely feels like it has its priorities mixed up.

For those who haven’t tried any of the Project Diva games yet, it’s a music game by Sega that features the titular vocaloid, Hatsune Miku. She is the mascot of the vocal synthesizer software, vocaloid, and is as endearing as anything else cute that migrates out of Japan. She’s used to supplant musicians who can’t afford vocalists or who just want to try out something new, and with no real licensing restrictions behind the software, users are able to compose an incredibly wide variety of tracks using her voice as a stand-in for real world vocalists, although based on her popularity lately, one could say she’s just as much a vocalist as she is software.

So this time around we’ve got a tracklist of a little over thirty songs, five of which are medley tracks of songs from old versions of Project Diva games (since the series has been running since about 2009). Compared to previous releases, this is an incredibly truncated songlist, and while every song is new, not all of them are stand-out tracks. There are some familiar track makers though, you’ve got KZ (livetune), Ryo from Supercell, Deco27*, and Mitchie-M just to name a few. Along with a couple of old tracks that have finally made it to the Project Diva series, like LOL -lots of laugh-, and Raspberry Monster. The songs are slotted into various genres, though the game boils them down to five major groups, Classic, Cute, Cool, Elegant, and Quirky, which kind of runs the gamut of what these songs can be classified as. What’s also surprising is the almost complete lack of songs by other vocaloids, I get that this is Miku’s game first and foremost, but fans of Rin, Len, Luka, Kaito, and Meiko are going to be sorely disappointed if they expected more than one or two songs from each character.

The story mode introduces you to each cluster, one at a time, which means you’ve got a very linear progression through the songlist, though this time it doesn’t feel like there’s a real ‘Boss’ song, one that’s so difficult that only the most skilled players will clear, nothing seems to match Sadistic Music Factory or 2D Dream Fever in terms of epicness or difficulty (well, sort of, you’ll see when it unlocks). One thing I do appreciate though, is that you can access all difficulties of a song in Free Play, rather than clearing each difficulty for a song to unlock the next one up. But in the story mode, you’re forced to play through every song in the game at Normal difficulty to start, which is a two button mode, making it a bit boring to slog through each song to earn the required Voltage to move on to the next cluster.

Voltage replaces the overall scoring mechanic in Project Diva X. Each song has a Voltage requirement to clear it, which can be augmented by the modules, or costumes and accessories you can unlock. Here’s where the gatcha mechanic that’s well known in Japanese games of chance rears its ugly head. Clearing the ‘Chance Time’ portion of each song with reward you with a costume module, and each song has a specific module for a costume, which is considered rare. Some modules can augment the rate at which you earn Voltage, others can improve the drop rate of rare class, or new modules, however there are plenty of extraneous modules that are just costumes from previous games, and while they are some of the better ones for boosting your Voltage or drop rates, it’s still a crap shoot on which module you’re going to get, and duplicate drops are extremely common. I also find it kind of shady that players can outright buy an unlock of all the modules, for those that don’t want to spend time grinding out that one module that comes from that one specific song. I tried to get the Raspberry Monster module for almost two hours, replaying the song over and over, and while I had gotten really good at the song, and earned a bunch of accessory modules, I was still miffed that I had spent that much time on one song. It kind of bums me out that some really good songs can be made unpalatable by the need to play them over and over. In previous games, players points would be banked and once a song was cleared, that module was available for purchase. I actually liked the Project Diva F 2nd approach where modules and accessories were tied to achievements with a specific song, but Project Diva X’s method, not my particular cup of tea.

Visually, this is one of the best Vita games out there, as it has almost always been, each iteration of the Project Diva series on the Vita gets progressively better in the visuals department and this game is no exception. The camera has also received a bit of an upgrade though it does that wild flailing shot while focusing on the character’s face that can be a bit barf inducing (seriously got sick of that back in the Rock Band days), but it’s a lot more dynamic and the movements of Miku and company have been expanded for more complex moves, giving each song a bit more of a unique identity.

Project Diva X is in a weird space for me. On one hand I still love the music, the gameplay, the difficulty, and the visuals are just icing on a tasty cake. But the shift in focus to make players collect modules is a curious one, dressing up Miku is certainly something to do, but it never felt like it was the focus of the game, so to see that become such a big factor to the experience is curious at best and frustrating at worst. Collecting all of the modules is something of a fool’s errand for everyone but the most dedicated of fans. The smaller than usual songlist is also a bit of a downer, they could have padded out the song list with some older songs and I would have been perfectly happy with that, just to give each category a bit more variety, but hopefully that can be resolved with a bit of DLC maybe? I don’t know if players are going to have the stomach for paying for it though after already shelling out the normal asking price for less songs than before. Ultimately I hope Sega can make some shifts back to the previous games and make it less of a random chance hunt. But otherwise there’s still plenty of fun to be had with Project Diva X, it just feels like we’re getting less bang for our buck.

Less bang for your buck is the best way to describe Hatsune Miku: Project Diva X. You've got a truncated songlist that has to be milked for modules, giving this series a grind game that it never needed to have. It's still got some great music and the presentation is as excellent as ever, but it still feels like we've been shortchanged somehow.