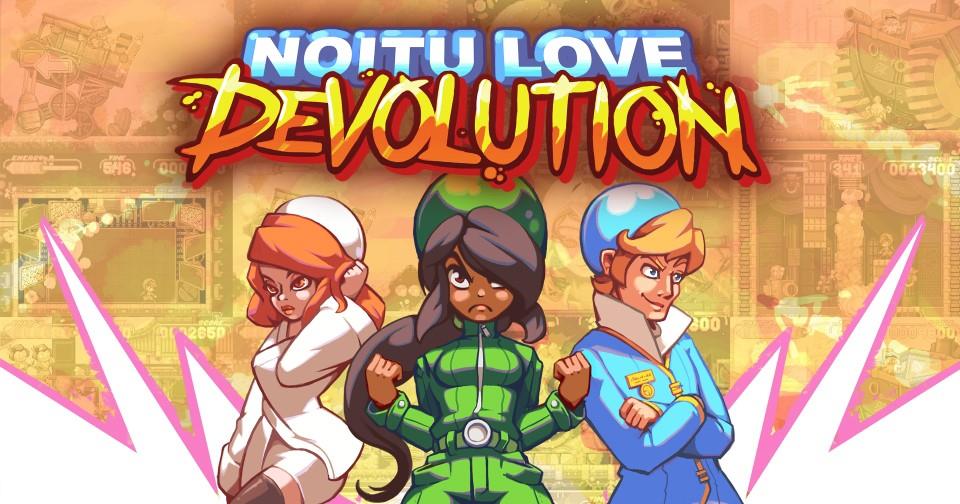 Written by Russell Archey on 9/15/2016 for WiiU
More On: Noitu Love: Devolution

Some games are not too difficult to complete but are meant to last a long time, to give you plenty of enjoyment with little frustration.  Other games tend to be rather short, but offer plenty of challenge to make it seem like it’s taking longer.  Today I’m heading towards the latter end of that spectrum with Love: Devolution.  The game is for both the Wii U and 3DS but while both games are the same game, each has a different feel due to the controls used.  While I’ll be reviewing both versions of the game, this review will focus on the Wii U version.

Believe it or not, this is actually the second game in the series, and it’s not even the first release of the game.  The original Noitu Love was released on PC back in 2006 with Noitu Love 2: Devolution released in 2008 with a Steam release in 2012.  Four years later and we’re getting the game in the Wii U and 3DS.  That’s nice, but it leaves me wondering why the original didn’t come out on any of these platforms unless I somehow missed it.  I did dig up a copy of the original PC release of the first game, but now I’m getting off track.

Noitu Love: Devolution takes place nearly one hundred years after the original game where the titular character defeated a group of robots known as the Grinning Darns and their leader, Darnacus Damnation.  Darnacus had attempted to use machines known as Evomatics to turn everyone into monkeys because…well why not?  Now in the present day the Grinning Darns have returned, and on top of that a cyborg duplicate of Noitu’s co-worker created by Darnacus has been reactivated.  Now it’s up to a new team known as the Green Helmets led by Mr. Almond to stop the Darns and get to the bottom of why they’re still around.

The Wii U version has two ways of controlling the game: using a combination of the D-Pad/face buttons and tapping the touch screen on the game pad, or using a Wii remote and nunchuck.  For the game pad it kind of reminds me of Kid Icarus: Uprising on the 3DS where you use the face buttons or D-pad to move around and tap the touch screen to attack.  The main difference is that Noitu Love: Devolution is a 2D platformer and it can take some time to get used to the controls.  Then again you can always use the Wii remote and nunchuck which is kind of like the Steam version where you move a pointer around the screen and press a button to attack.  Given my propensity for bad Wii remote aiming since I’m left handed (I use the nunchuck in my left hand), I tended to stick with the game pad.

In each of the game’s seven stages you have to make your way to then end while taking out various Darns in your way.  Each stage will usually have at least one mini-boss, typically two or three, then an end-of-stage boss that usually has some unique way to take them out.  When using the game pad attacking is done by either rapidly tapping the touch screen to melee attack enemies or swiping either up, down, left, or right to perform a special attack.  Tapping an enemy that’s at a distance will usually target them and move you right up next to them, allowing you to keep up a constant attack and increase your combo multiplier for a higher score.  You can also hold down on the touch pad for a couple of seconds to charge up a ranged attack or to even grab an enemy, but I never got the hang of grabbing enemies and usually just defeated them using normal attacks. 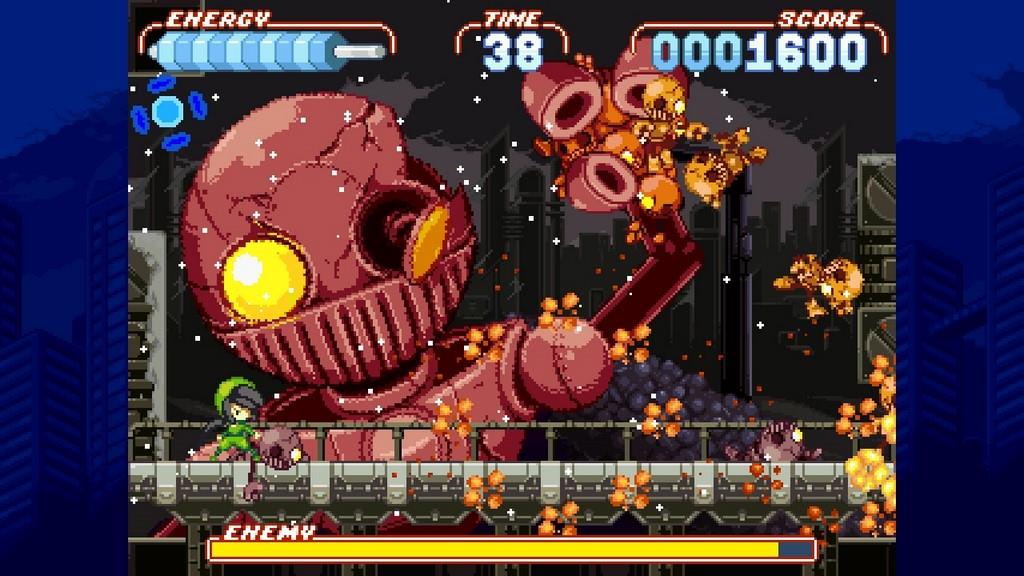 When it comes to difficulty it’s kind of hard to say one way or the other.  On one hand the default difficulty can provide a challenge if you’re not used to the controls, but once you get the hang of them you’ll be flying through the game in no time.  Case and point, my first time through the game took just over an hour while the second time took a little shy of fifty minutes.  On the other hand, there’s also a Hard difficulty which adds more enemies as well as making bosses and mid-bosses tougher to defeat.  As easy of a time I had with Normal difficulty, that’s how hard of a time I had with Hard difficulty.

That’s not to say the game isn’t worth it.  I couldn’t find a price point for the 3DS version but on Steam it’s only $4.99 so I’d guess that the 3DS version will be around the same, and for that price I’d say it’s worth it.  The difficulty options remind me a bit of Mega Man 2 where there’s a Normal and Hard difficulty, but they might as well be labeled Easy and Normal.  Normal difficulty more or less gets you used to the controls while Hard difficulty is the real deal.  Needless to say a run-and-gun tactic won’t work quite as well and you have to start implementing some strategy at the very first mid-boss.

I won’t get too much into spoilers but I mentioned earlier about a Darnacus creating a doppleganger of Noitu Love’s co-worker.  Beating the game will unlock the doppleganger, known as Rilo Doppleori, as a playable character.  You still have to tap the screen to attack with her, but she has a ranged attack instead of having to get up close and personal.  This is both a help and a detriment as she can attack from a distance, but you can’t tap an enemy to auto-target and close in on it.  It’s a unique way to play through the game once you have the main game down and need a new challenge. 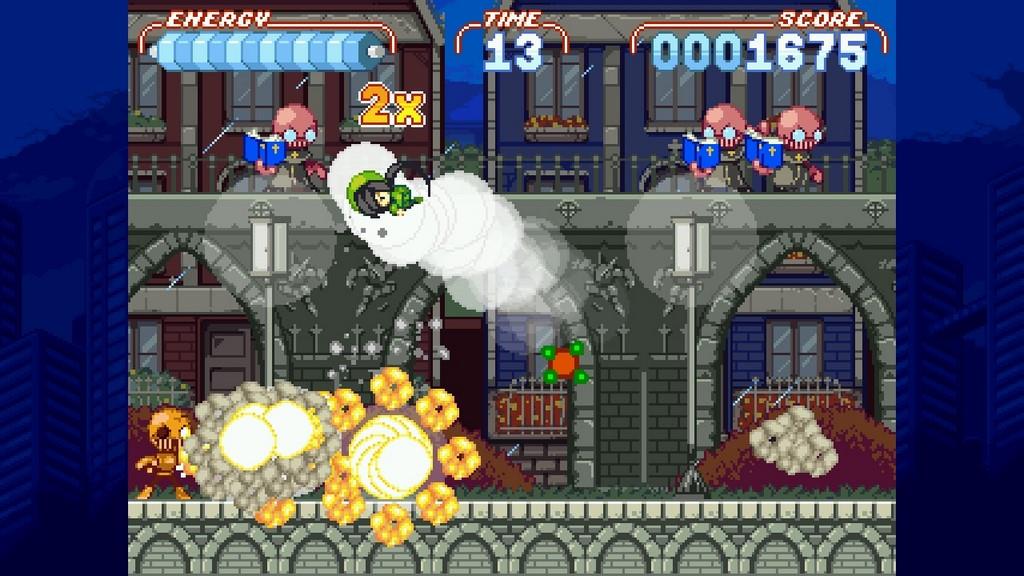 It took some time for Noitu Love: Devolution to grow on me as my first impression of it was that it was too easy.  Once I got past that and checked out Doppleori and Hard difficulty my thoughts on it changed.  There is some replayability in terms of getting a better score or just wanting a higher challenge.  Honestly, I never beat the game on Hard difficulty so I’m not sure if anything else can be unlocked, but that’s part of why my impressions changed; the Normal difficulty is like the warmup to get you used to how the game works, while Hard difficulty is the real deal, and for five dollars you’re getting a game that’ll last a while.

With the 3DS version I had to give a bit of criticism to trying to hold the 3DS steady while tapping the screen over and over again, and possibly even breaking out the 3DS stand that came with Kid Icarus: Uprising to help out a bit.  I didn’t have to worry about that with the Wii U version because while it is a bit bigger and bulkier than a 3DS, I typically rested it on my lap while playing.  That said the game does have off-screen play…which is good because you won’t be looking at the TV while playing this one since you’re always looking at the touch screen to see what you’re doing.  Of course if you want an added challenge you can play while just looking at the TV…or you can try to use the Wii remote and nunchuck.

Beyond that, Noitu Love: Devolution is an enjoyable game no matter which system you play it on.  In fact, I ended up tracking down the original game for the PC to check it out, though I prefer tapping a touch screen as opposed to giving my mouse and index finger a workout.  The visuals and audio work well for the game and it does provide a decent challenge once you move onto Hard difficulty.  If you have a few dollars lying around in your eShop account and like these types of games, you’ll likely want to give Noitu Love: Devolution a shot.