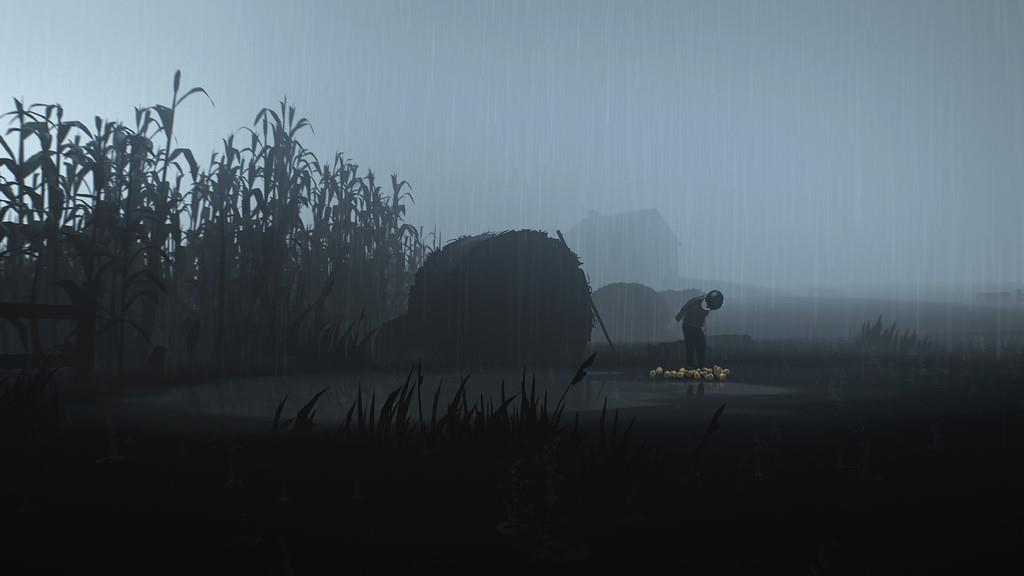 I’ve never played anything quite like Inside before. Considering its simple control scheme and never-too-dense platforming puzzles, it seems strange that that’d be true. But you’re a boy, eight or nine years old, maybe. Prepubescent anyway. You’re dressed in a simple red longsleeve shirt or sweater, black pants and black shoes, possibly dress shoes. One pant leg looks like it was hemmed too high. One sleeve is pushed up to his elbow. The boy, at any rate, doesn’t look ready for adventure. He isn’t dressed for it.

What is he running to? Or from? The marketing PR says that a young boy is drawn further and further into a dark project. So with nothing more than left to right movement, a jump and an action button, the marketing PR is strangely vague but disturbingly accurate. You’re drawn further into something. To save yourself? To save someone else? To shut this dark project down? Who knows. The uncertainty is thick as fog and weighs a ton.

The world is color drained. Color does punctuate certain scenes, but never in a warm, loving manner. Color, aside from your red sweater, is seemingly unsafe. There will be a red light in the distance, and you’ll push the boy the make sure he gets further along.  So you’ll run. You’ll see his head turn slightly to look at something taking place in the background. There’ll be an unmarked van. Men with guns and flashlights. Dogs. Possibly worse. Probably worse.

So you’ll make him run. “You can do this, buddy. Keep moving” But you’re never 100 percent sure he can. Or, more accurately, you’ll become increasingly frightened of what it means to keep moving him forward. What happens if you successfully take him to the center of this dark project? Do you really want to know?

Inside takes place in coldly scientific locations. There’s the broken-down aesthetic of rats-in-a-maze going on. Heading from deciduous woodlands to crowded cornfields to big, blocky warehouse-sized buildings makes it feel like a Middle American spin-off of Half-Life. There’s a massive, weird, government-sized experiment in the works, but your role is a big huge question mark from beginning to end. 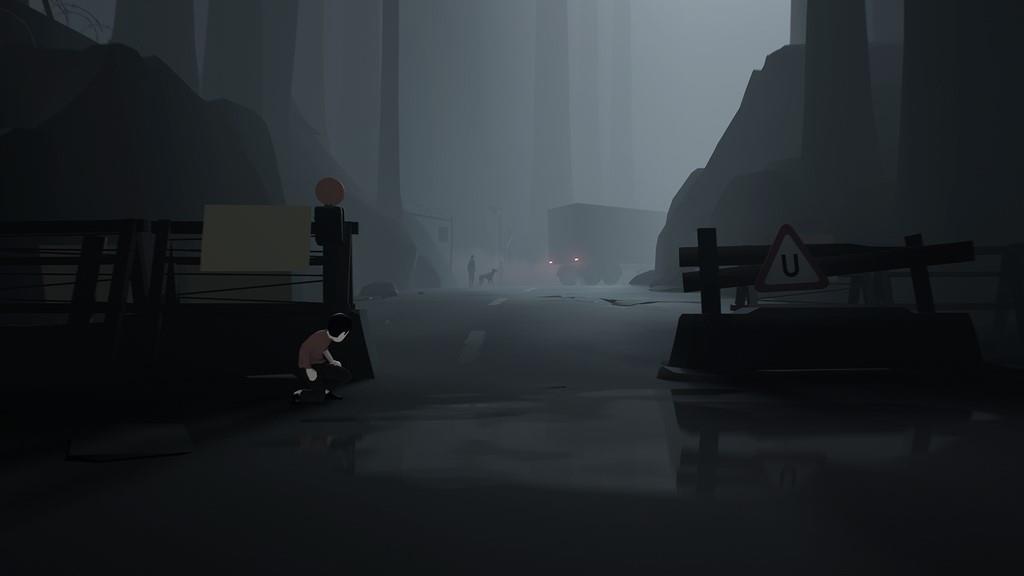 So you run. You don’t run like you’re one of the Super Mario Bros., or Sonic the Hedgehog, or Ezio Auditore from Assassin’s Creed. You run like you just got your face slammed into the hall lockers by a middle school bully and you’re just trying to make it home without breaking your marching band instrument. You have a slumped posture. You always seem to be looking over your back. You look beaten, frail and afraid from the start. But there’s a determination to push forward. There’s an impetus to keep you running, which is something that can’t be explained in “gameplay” terms. You’ll just know that it’s your only option, no matter how bad that option may be.

Because the world is menacing. Sometimes it’s just a single, sharp, angry red light on a building in the background than you keep your eyes locked onto, all the while urging the boy on. The kid isn't some parkour prodigy. He slips, he stumbles, he struggles to regain his footing; he doesn’t have hit points, a health bar or a regenerating shield. He’s just a kid. All you know is that you have to get him through this.

But he has a tendency to make you feel smart—with a hint of desperation and cold sweat. You feel smart solving these puzzles, like you just might be able to survive in a similar nightmare. You’d probably be wrong. There are too many things you aren’t prepared for in Inside. Rarely do the puzzles feel unfair, though. Sure, there’s a little bit of the developer’s previous work to be found here. Remember Limbo? There were times in Limbo when you wouldn’t know what hit you until you saw, oh, great, now there’s a giant spider leg impaled through my chest; I guess I start this section over. There’s less of that never-saw-it-coming kind of stuff in Inside. But there’s some. It won’t make you angry, though. It’ll make you smarter. It’ll make you take in your surroundings better. It’ll force you to climb that ladder, swing off that rope, or take that leap, and to not screw around while doing it. 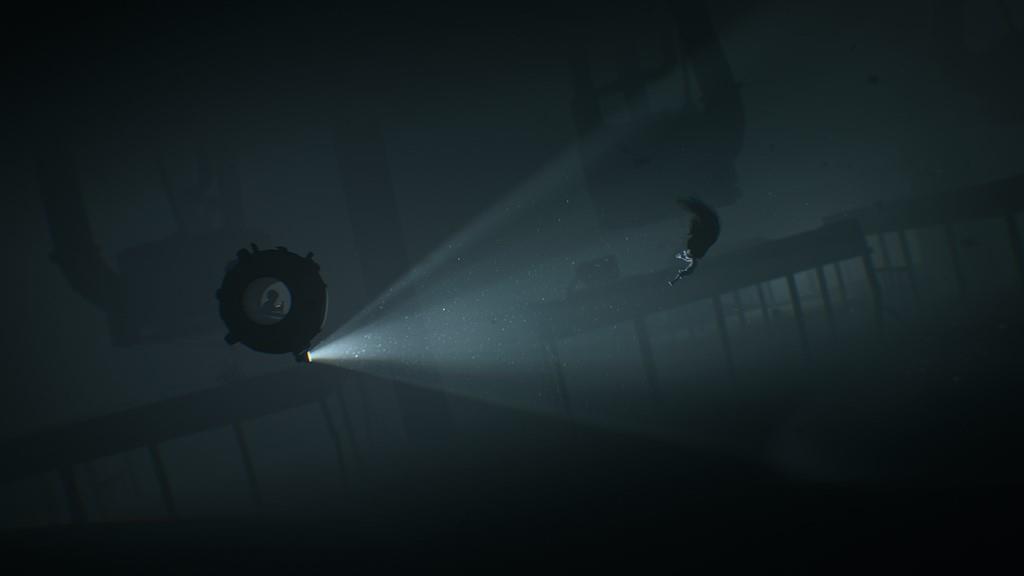 The imagery in Inside can be so cold, so uncaring, that it seems impossible you haven't already had this repeating nightmare since you yourself were nine years old. The place is populated with brain-numbed people that just can't seem to die. Men compelled to move forward only because something is pushing them from behind, or pulling them from the front.

Moment to moment, I know how to progress. What I don't know is if I want to.

After you complete one puzzle and move on, you'll have learned to fear certain things. Spotlights, for instance. Or booming sonic explosions. Or dogs. Man, do not let yourself get caught by those dogs.

Those flashlights in the beginning—wielded by men with guns—induce so much paranoia early on. From that point forward, every single light you see will sew a fearful intensity into every scene, even if that light does nothing. Even if it was just a little light escaping a cracked doorway, or just a railroad signal, or just some other mundane light that ends up doing nothing, you’ll have already learned to be afraid. 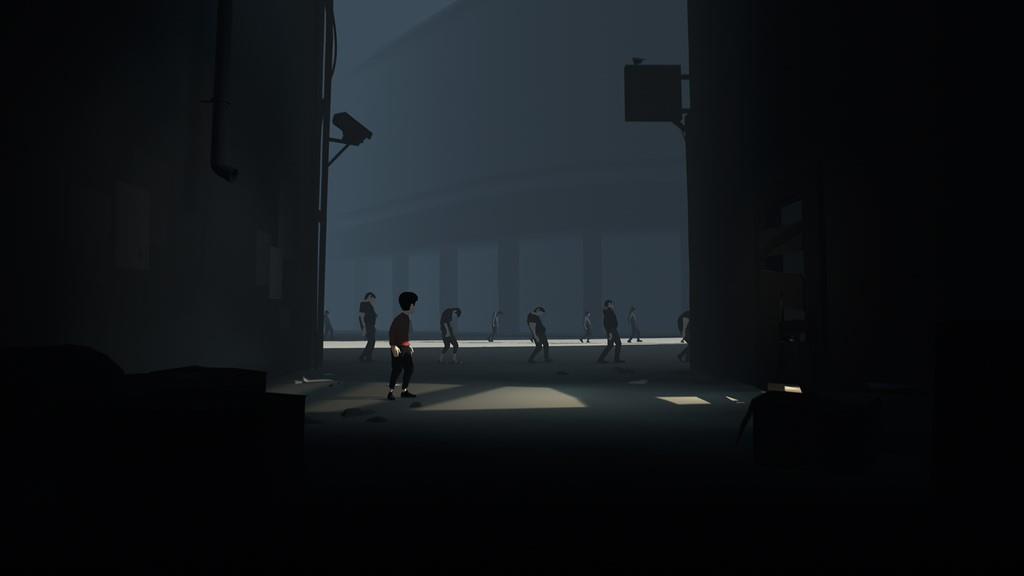 Because you see how afraid this kid is. You see the way he clutches his chest when he nearly drowns, wiping water from his face. It made me, more than once, give a video game character a little breather. Not because I needed one. Well, maybe I needed one. But I gave the little guy a breather because I thought he could use one. That’s a level of empathy I developed for this boy that I’m just not used to developing with any character, let alone some character I just met. I’ve run around with role-playing characters for hundreds of hours that have evoked less from me, and Inside is only a few hours long. It’s only three, maybe four hours. But it’s such an intensely crafted three or four hours. It’s such a cinematically paced three or four hours. You won’t even mind, though, because nothing would be gained by fluffing it up to 10 or 12.

To make it so you don't even recognize patterns in the puzzle layouts, Inside might not even be abiding by the Rule of Threes. The so-called Rule of Threes is a term suggesting that things are funnier, more satisfying or more effective when done three times; it supposedly helps a listener remember things easier. But Inside challenges that theory. Inside does things twice. Maybe only once. So you feel like you just barely know how to work out a situation, and then it never shows it to you again. You can't ever fully catch on. You can't get stuck in a loop. You can’t get bored. You can’t do one thing so many times that you tell yourself, Oh I know how this goes. Inside, as far as I can tell, ignores the Rule of Threes, and it’s better for it.

No one explains why in the world this lever opens this door while moving that crane. But it doesn't have to. Everything is possessed with a normal purpose, only made horrible through your plight. Also—and this is a directorial trick—it often doesn't show you the next room you're hurling into. The camera snaps to attention in the next room only after you're already falling further into it. It gives you a tiny adrenaline-laced shot of “Oh no!” before allowing you a second to take in your all-new surroundings. 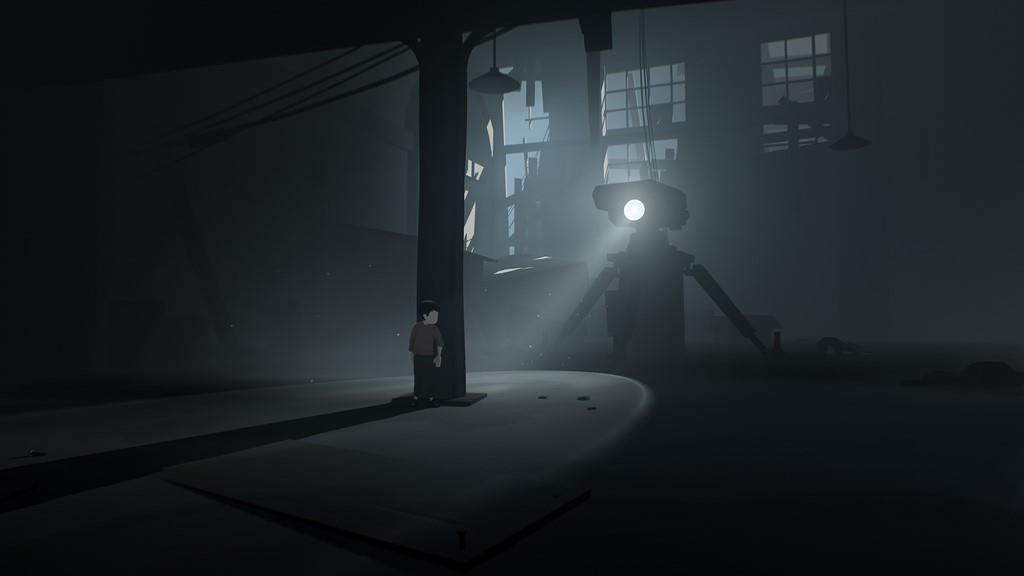 More than a few times, my jaw dropped as one more piece of this physics-based Twilight Zone pulled back a little more of the curtain. Up becomes upside down, down becomes right side up. But only in the most disturbing ways. It'd look like a neat David Copperfield magic trick if the fear of capture and death wasn't so imminent.

There’s also the wanton abuse of battered human bodies. They’re just grotesque in their slipshod, skin-slapping humanity. Or inhumanity. Is there even a human left in these husks? Again I’m asking myself, am I here to save these floppy sacks of brain-dead humans? Am I to become one myself? “Just keep running, kid,” I kept telling the boy on my TV screen. “One way or the other, we’ll get through this.”

The main thing I learned by the end of Inside was that I was wrong. Or, at least, I wasn’t completely right. I didn’t know what to expect, but I didn’t expect that. Despite how wide-eyed I got by the end, Inside riveted me for every single minute. It’s dark, its gallows humor is bone dry, and its monochrome construction will make everything else disappear, and make this boy’s mission the only thing that matters.

This is a game that will still be talked about five years from now—even 10 years from now. Inside was pretty much three hours of me shaking my head, clutching my chest, and realizing every few minutes that my mouth was hanging wide open. It’s an analog science-fiction thriller, and so good that it’s impossible to improve upon. It’ll get right inside you.