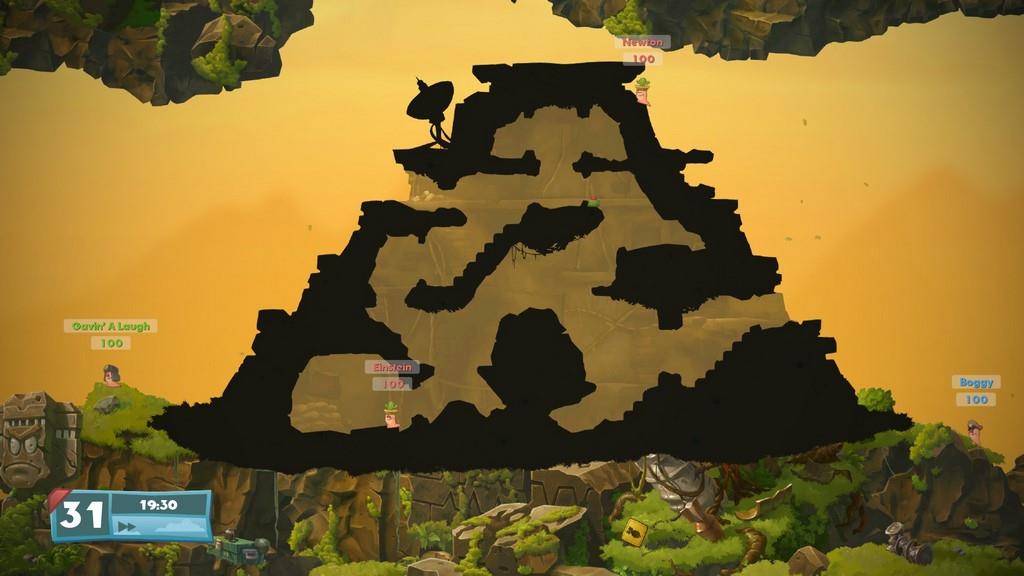 It seems like the Worms franchise has been around forever, and in gaming terms it practically has. The concept debuted on the Commodore Amiga in 1995, and over 20 years later Worms WMD marks the 23rd distinct iteration of the game. This time around we're back to the tried and true formula that has kept the idea running for two decades, only with an upgrade to the tools of war.

At it's heart, Worms WMD is a turn based combat sim between two opposing forces on a two-dimensional map. The forces are made up of worms (what else?), the maps are destructible, and nearly every weapon causes some sort of destruction. Giant concrete donkeys crush a hole straight through the map down a vertical path. Satellite lasers obliterate large swaths of territory. Bazookas, mines, grenades, and the like all open up pockets of empty space where buildings or foliage once stood. Everything, even bullets fired from small arms, chips away at the solid ground where you once could stand, and therein lies the entire strategy of the game: choosing the right weapon for the job from the arsenal at your disposal at any given time.

The trajectories, areas of effect, and power behind each weapon is unique. But it's not always the case where it's best to go big or go home, and not just because your weapons only have limited uses. Large explosions can create chain reactions with already laid mines and barrels that desolate the terrain you may soon be needing to traverse or worse yet, might bounce bite and bite you if you're at too close a range to the blast. There are a few vehicles thrown in like tanks, helicopters, and mechs, but it is often as important to be able to retreat them to safety at turn's end as inflicting pain during the round. All this is done under a timer of about a minute per turn. There's enough time to get done what needs doing, but it does add a bit of pressure. Also you'll only be able to get off one shot per round. So once you select and fire your weapon, the timer will automatically bump down to about 5 ticks left, just enough to make a recovery dash to cover or position that chopper over solid ground again.

There's little barrier to entry here. For those unfamiliar with Worms, or just needing to brush up on the new weapons, there is a thorough set of tutorial levels to introduce you. The tutorials now only teach, but are timed and gamified themselves to keep players striving to complete them in the gold time. There is also an entire second level of tutorials, the "Pro" levels that unlock once the initial offerings are all completed. 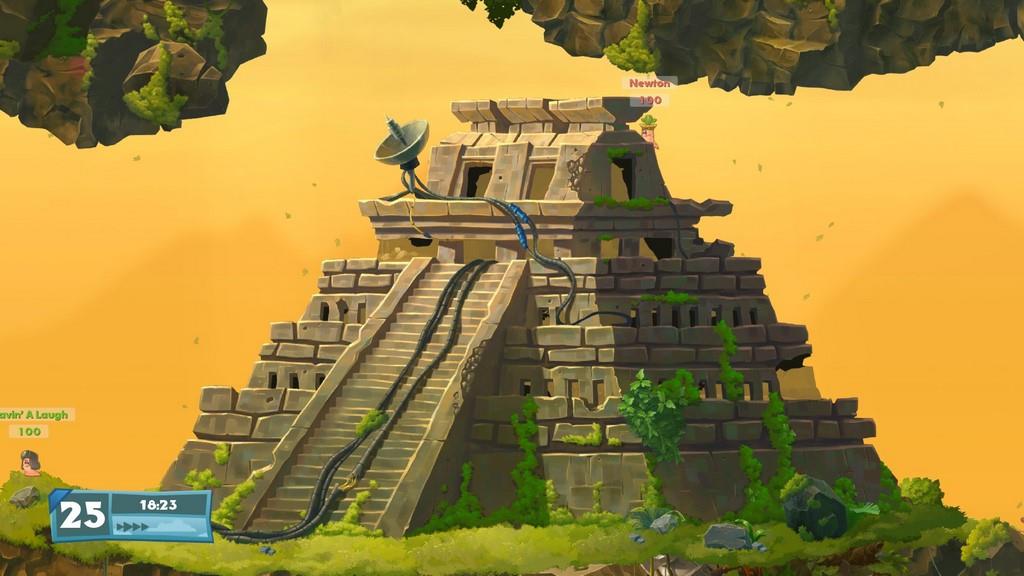 Once the action starts you'll quickly find this is a game that doesn't take itself too seriously. Your troops are worms for crying out loud. There are plenty of wacky weapons and hijinks in store such as the aforementioned Concrete Donkey, exploding sheep, and even Monty Python's Holy Hand Grenade of Antioch (bud sadly I never caught sight of the Killer Rabbit of Caerbannog).

You've got tutorials to get started, a pretty decent amount of single player levels, and along the way there will be wanted posters opening up challenge levels that ramp up the difficulty a bit for a particular boss battle. There's also local multiplayer as well as ranked and unranked online multiplayer and private lobbies. There's plenty of levels and challenges on offer to keep you busy for quite a while.

I do have a few criticisms of the game. Firstly the control scheme is way too touchy for a control stick. Directional controls are used to both traverse your worm right to left and aim your weapon up and down. With careful aim under a constant timer at such a premium, I found myself frequently frustrated when carefully aiming up a shot, delicately nudging the reticle up to down under my thumbstick when my thumb would ever so slightly veer right or left and the my worm would trudge a few paces in that direction. The change in position would completely throw off the entire aiming process and force me to reset my sights, undoing all that delicate work done previously. Best advice: abandon the control stick and use the directional pad on this one, problem solved. 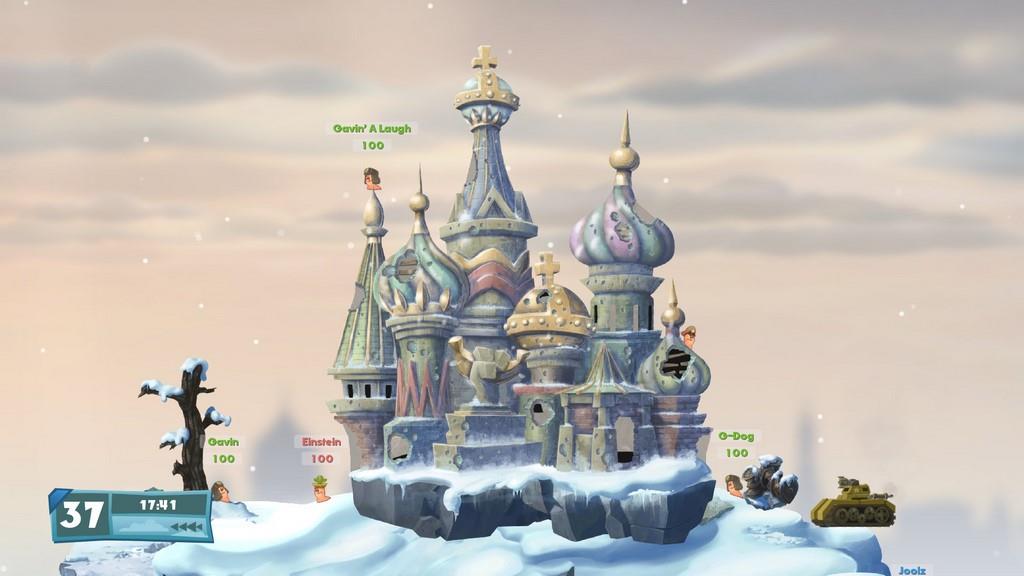 My major complaint, however, is in the general pace of the game. I get that other users in multiplayer are going to want to use their whole time allotment, but there is no easy or intuitive way to skip though actions in single player. Both when on the attack or waiting on your opponent to complete theirs, the game just labors along slowly. I'm sure the AI can't be taking that long to compute the next actions, so there's no reason not to just dedicate one button to skipping ahead when it's not your turn, just as there is when a replay of a big turn is triggered. You can sit back and enjoy a second showing of the carnage just wrecked, or you can skip back to the game itself by hitting a button. That;s what is also needed on the dead time waiting for an AI opponent to plod along into position with their worm, slowly switch weapons, and then carefully aim their own shot. 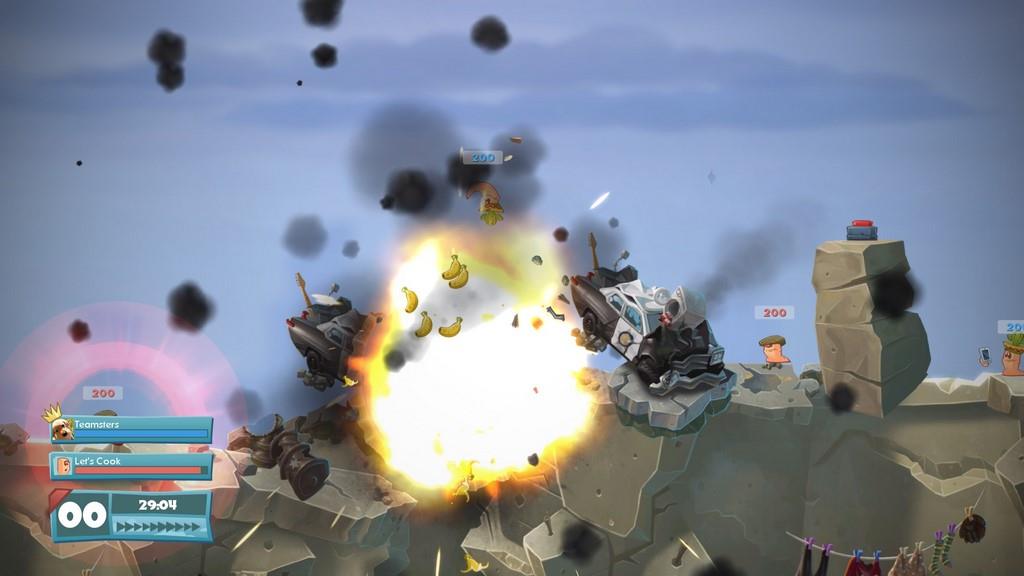 Lastly, I'd also mention that one little niggling leftover that has plagued worms games from the start: the hero pixel that stops armies in their tracks. The environments in worms are fully destructible, but they don't really have any component of gravity or physics. So there might be a small obstacle in the way, and a recent blast may have seemingly eliminated the blockage, but you approach to pass and find that one little hanging pixel in the top corner just outside of the blast radius that survived. Head high and nigh impassible, your worm (or worse yet tank) has been stopped in their tracks. Unable to duck under, jump over, or go around in the two-dimensional world, the only way past is to back up and waste another turn clearing this leftover with the most precise follow up blast. Granted the destruction wrecked by weapons over the terrain prevent this game from implementing any real type of physics based destruction, or else every map would crumble into the seas after a few turns, but I'd love to see just a bit of cleaning up in the game engine that would recognize some minimal threshold of unconnected territory after a blast and go ahead and just absorb that hero pixel along with the rest of the chaos.

Over the years Worms has tried a few times to freshen up its franchise by changing the formula a bit, sprinkling in 3D, and other gimmicks. Worms WMD is a back to the basics effort that proves the original formula is the best one. There is nothing broken about the gameplay. While it could use an injection of pace, it delivers a great experience both offline and in online multiplayer.