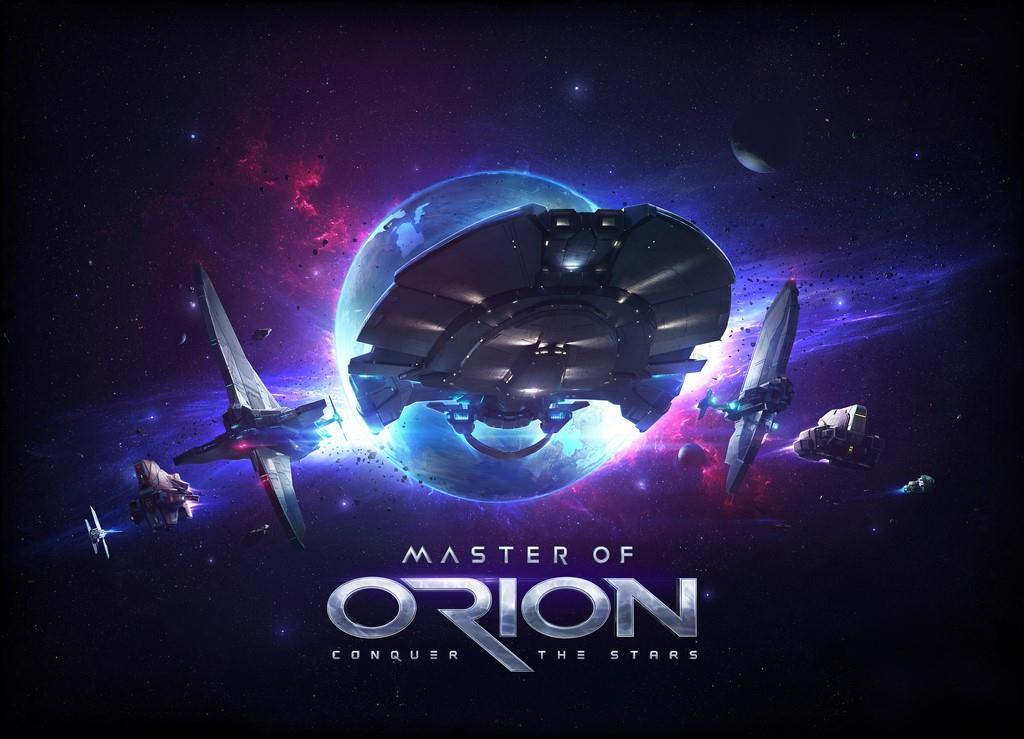 Master of Orion: Conquer the Stars features ten classic races from the MoO universe. These are Alkari, Bulrathi, Darloks, Humans, Klackons, Meklar, Mrrshan, Psilon, Sakkra, and Silicoids. Each race has a leader that the player will control the race as. These leaders are our insight into how the selected aliens look and act.

I was delighted at how the game makes each race so individual and unique. The Silicoid, a race of ancient geode beings whom watch as other races and civilizations come and go in a blink. They don’t need food in order to survive but have a terrible rate of reproduction. The Psilon are a humanoid race of highly scientific beings. Our narrator tells us they prefer to avoid combat and devote their time to studying science. The race characteristics are true to this. They receive a considerable research bonus from their population but are incompetent as armed boots on the ground.

From the New Game menu players are introduced to each race, their history and their characteristic traits. The game does a great job at building relationships between the player and the alien races. The traits of each race vary wildly and have considerable effects on how you plan to play. Said traits are the make-up of every race in the game. Our buddies the Silicoids don’t need to worry about food but have slow reproduction so colonizing planets will take a long, long time. The Psilon are like the nerds. Their super smart but can’t defend themselves. In come the Bulrathi. The space hippies devoted to saving the universe. The Bulrathi have a +50% ground attack bonus. Don’t mess with the hippies.

There is no defined story line in Master of Orion. Instead the player creates the history of the universe as they play the game.  As cheesy as it sounds MoO does such a good job at delivering this experience and I would recommend it for this alone.You can count your lucky stars the reboot is so pretty. Literally, count the stars. Yellow, brown, blue and red stars make up the universe we play in. This is important. Earlier we said each race is subject to their individual traits and characteristics. When it comes to choosing which planet to coloniae first look for what color star your home system is. This gives you an indication of the ideal solar system to look for.

Red stars normally produce rich planets but can support little life on the planets. Ideal for the Silicoid, the geodes whom don’t need food to sustain life so they can take advantage of the rich minerals on the planets surrounding the red star. If Human, look for yellow stars like our own sun. These planets are fantastic at supporting life and have a decent amount of minerals on them. That’s the easy side of colonising. The ideal solar system won’t always be so easy to colonize. Whether it be pirates, alien races, giant space squids or distance more oft than not you’ll spend a while searching for that ideal system. I wasn’t joking about the space squid. Other factors to consider are the gravity and the biome of the planet. Races whom cannot adapt to the gravity or biome of a planet will suffer heavy penalties. Those who are well suited to the conditions will prosper if shepherded correctly. 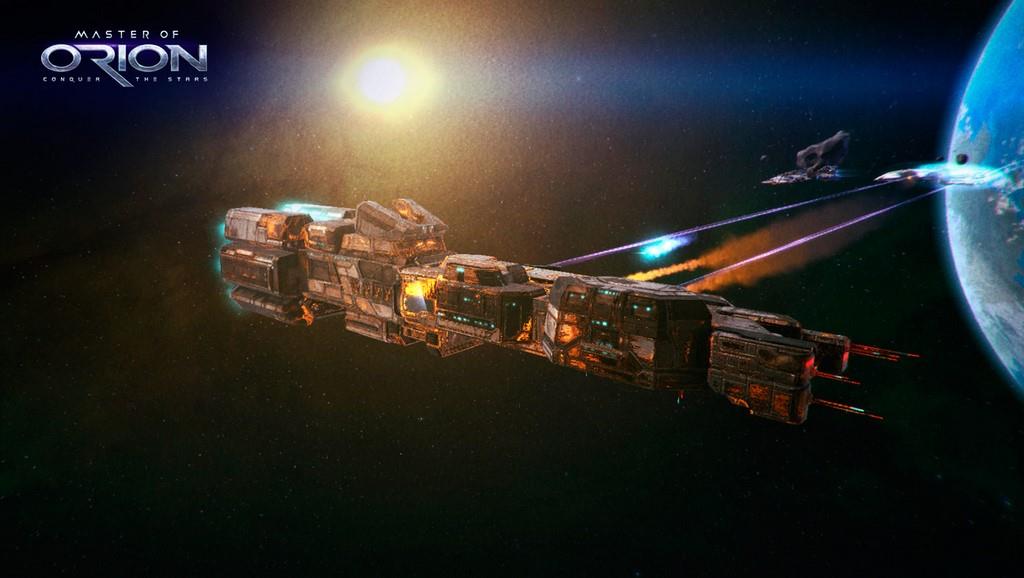 Master of Orion is a turn based 4X strategy game. Ships can make one move per turn. Choose each order wisely as sometimes it can mean the survival or death of a colony. I learned this early. A Psilon ship entered my airspace. I had stretched my fleet too thin on a gamble to scramble for colonizable solar systems. The Psilon ship bombed my fresh pop and erased it. Protect your colonies with Star Bases or Missile Batteries. Otherwise you’ll be forced to spend another 10-12 turns waiting for a planet to produce a colony ship. Ships and buildings are created by planets after a number of turns. The number of turns depends on the number of production units the planet produces.

A planet rich in minerals, such as one orbiting a red star, could produce a ship faster than one orbiting a yellow star. This is susceptible to planet size and population available. So every ship can move only once per turn. Each ship requires a number of turns to produce. Each production center has a buyout option. It can be costly but sometimes vital to buyout a ship or building. Especially in the middle game when credits are easy to accumulate but ships are not. Especially when enemy fleets are jumping into your home system.At first I was wary of one move per turn. Recently I have been playing Stellairs and Hearts of Iron IV.  Neither of this games are turned based and I love it. So naturally I was worried if I would take to the slower pace. Instead I was charmed by the one move one turn system. The pace of each single player campaign is blistering. Once you get the hang of the UI, which is gorgeous and well designed, the game suddenly becomes streamline. The UI does all the micromanaging and instead allows us to stare at the universe and ponder which system will fall next.

The game allows players to control ships during combat or auto resolve. During combat the player controls the engagement, movement and speed of each ship or multiple ships from a top down view. The battle is displayed through a radar which I really enjoyed. I felt like I was an admiral on the bridge of a space crusier watching the battle unfold on the ships radar. I flet like Admiral Adama. I prefer to auto resolve battles to keep momentum during a campaign. Although ships can only move once per turn they can indeed move and attack in the same turn. They can also attack defending fleets and then bomb planets. Although Space Factories, Scouts, Colony Ships are available there are six offensive ships available. Frigates, Destroyers, Cruisers, Battleships, Titans and  Deathstar DoomStars. Yes  Deathstar DoomStars. The first five ships are self-explanatory. DoomStars are exactly what they sound like. These are planet sized ships designed and used to blow up entire planets. 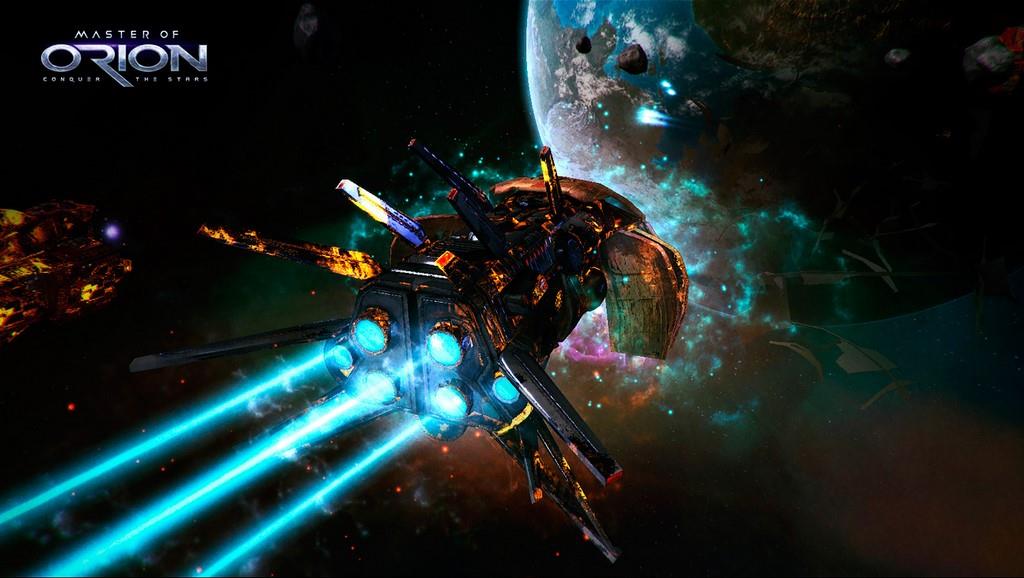 The research trees are fantastic. Depending on how you choose to lead your race, you can sprint down a tech tree to unlock warp gates,proton missiles, or the technology to terraform an entire planet. I’m a big fan of Stellaris and the research available but Master of Orion stole my heart. When choosing a tree to commit to its important to take into account what strategy is best for your race. The Bulrathi should focus towards terraforming and improving their ships through new weapon systems. Psilon should focus on trade and defensive platforms. Research is important because it ensures your survival.

Space pirates from each universe will become harder and stronger as the game progresses. Eventually, around 30 turns in, they’ll outmatch your starting frigate in terms of attack and defense. That red and purple number you see over ships are the attack/defence values. You don’t have to have superior firepower to survive. Like the Psilon you could focus on defensive strategies and planetary shields. This won’t stop hostile races from attacking you, but it will buy you some time until your allies arrive.

The diplomacy in the game is fantastic. Really really solid. If you’re allied to say the Bulrathi whom are at war with the Silioids. Flirting a trade treaty with the Silicoids will upset your allies and they might act accordingly. If you capture spies you have the option to deport or kill them. I deported the first one I found much to the delight of the Alkari whom had sent the spy. The second time I found him on the same planet I executed the spy. Its important to at least have an agent conducting counter espionage on your primary planets. The spies in the game are lethal, overpowered even. They are able to stop planets producing research points for 10 turns, or incite a planet to revolt so the original controlling race is powerless for 20 turns. Don’t think the AI will take all that easily. As I played as the Humans an unknown race caused a nuclear spill on Sol Prime, my home planet. Lovely.

If Master of Orion had the flashy space battles we’re accustomed to nowadays I’m sure I’d feel a lot different about the reboot. I love it for what it is, and that unlike other games it doesn’t try to be anything its not. One negative for the campaign was the like of AI included. Even on the biggest maps players will only face off against 5/6 AI races. Because the game does such a good job at creating clandestine operations and the diplomatic consequences I would have loved an overpopulated galaxy. The reboot is massively entertaining and often quirky at times. The game stays true to its traditional roots and does a fantastic job in such a competitive market.

Although it doesn't supply intense space battles like Sins of a Solar Empire or Stellaris it doesn't have to. Instead Master of Orion delivers an exciting universe where every action has a diplomatic action or consequence you can act on. The AI does a fantastic job at staying true to each races individual strengths and weaknesses during a campaign. The game is so well designed. Micromanagement and nitty gritty work is made effortless. Just look at how players control pops on each planet. The screen is never cluttered with useless data and comedic relief is delivered through news highlights of a galactic news network.