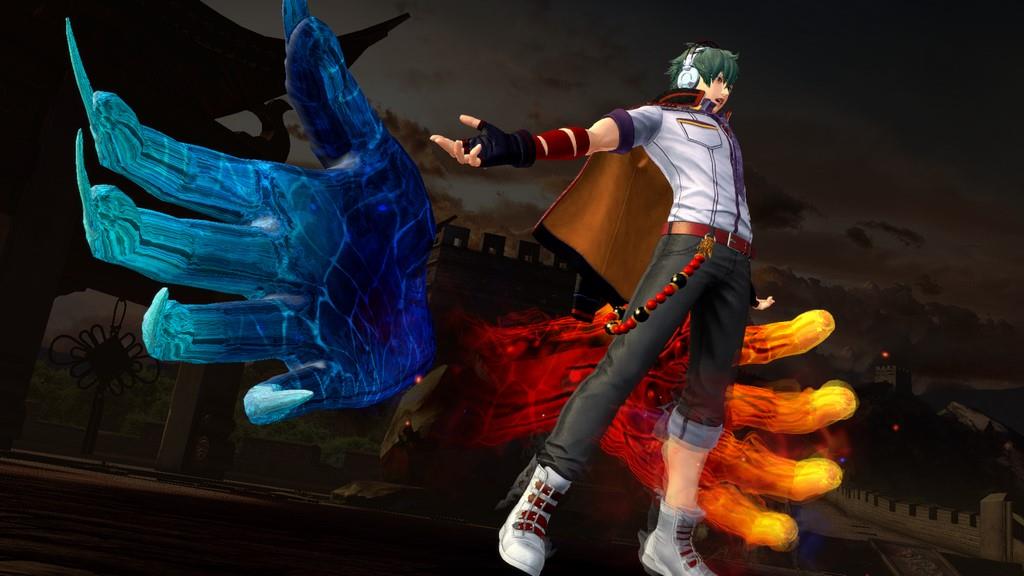 It’s been a minute since we’ve had a King of Fighters game grace the consoles. The venerated franchise that has come and gone as often as SNK’s existence in the game space, has finally received a new entry nearly five years after the excellent King of Fighters XIII, and now it’s on the next generation of consoles, giving it a fresh new look. Well, sort of, 3D models were used in the PS2 era for King of Fighters Maximum Impact, which wasn’t as well received as the series standard was to use 2D sprites at the time. But with King of Fighters XIV we return to 3D character models, and the early showings of this game looked rough. Would the gameplay hold up with the change in visual style? Could the speed and finesse required to execute be maintained? I think we can all breathe a collective sigh of relief when I say, yes. However…

One of the most jarring things about King of Fighters XIV is its visuals. The 3D character models for the most part have transitioned into 3D fairly well, though Kyo has taken on a bit of a younger pretty boy vibe. Some of the new characters seem to have a bit more attention given to their looks than others, with standouts like Sylvie Paula Paula, an obvious homage to Japan’s export of strangeness, Kyary Pamyu Pamyu. The models themselves may be lacking a bit in minor flair and details, but the animation more than makes up for it. The backgrounds have also been given the 3D treatment and for the most part look good, though I miss the sprite work of the last two games. If there is something to fault this game for, it’s for its lack of visual consistency, and what I mean by this, you have three different visual styles going on. The in-game visuals are used throughout the menus and some story elements that take place between characters in some particular match-ups. Then you have the 3D CG visuals that are used for major cut-scenes, mostly starring the game’s antagonist, Antonov (who is a great fake heel), and then finally you have the endings which are told in 2D anime style cutscenes. It’s just bizarre that you’d have three different mediums telling the story in one game. The music and audio are great, with a lot of the sound effects retaining that King of Fighters style, and the voice cast has a lot of returning characters, so it’s good to see that things haven’t changed that much.

In terms of content, this game is without peer. For all the hand-wringing that has gone on about Street Fighter V’s lack of content, SNK went nuts. There are 48 characters plus two hidden boss characters that can be unlocked. This gives you plenty of choices when formulating your team, or you can go with one of the sixteen pre-built teams. With those characters, there’s plenty to learn, so there’s the requisite training mode, but also an online training mode that you can use with friends, perfect for when you need to have someone help you set-up in the lab, but you’re not local. Then there’s the mission mode which contains five challenges for each character, a survival mode, and a time attack mode. On top of all of that, whenever you play something you’ll unlock something from the rather expansive gallery which features works from the humble beginnings of KOF, all the way to the latest art assets, along with music, and the CG movies that you unlocks through the story, along with the endings.

In the online modes there’s plenty of each access to find a match, though over the course of this review, we missed the window to play matches with the Atlus staff that was populating the servers, so I cannot vouch for the net-code this time, though claims are that it has been improved. The online menus feature ranked matches, free matches, and online replays, where you can browse replays that have been uploaded by other players, and there’s a handy quick link to Live from Playstation where you can catch live footage of KOFXIV or video clip highlights. If you’re the type of player to get totally immersed in King of Fighters, then this game has more than enough content to keep you covered. The story may just be like your typical arcade mode, but it’s something people have been clamoring for since Street Fighter V’s release and we still don’t have it, so kudos to SNK for keeping with the gameplay experience players know and love. 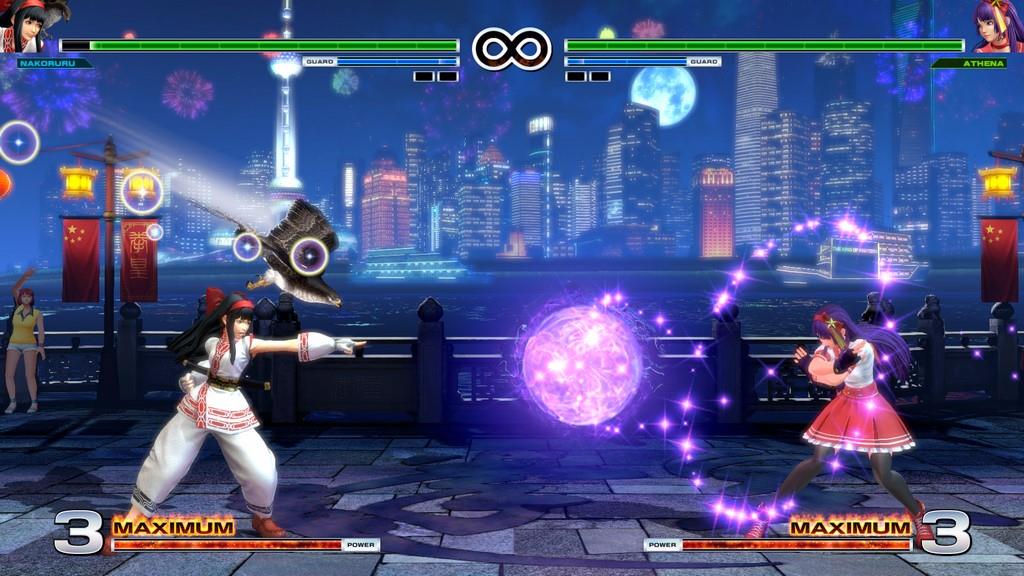 If you’ve never played a King of Fighters game before, let me break it down, there’s only four attack buttons, light punch, hard punch, light kick, and hard kick, assigned to the four face buttons, so playing with a controller is pretty easy. There’s also a few technical moves like hopping, which is shorter than a normal jump and is used to close the gap over some ground based projectiles or used to bait out anti-air attacks. Normally spammed, the hopping has actually had a slight change to prevent it from being used as such. What’s also a strange change is the properties of sweeping your opponent. Now a sweep will knock an opponent back, unless in the corner, so now it can be used as a mechanism to push your opponent, though if used in the middle of the stage, it operates more as a hindrance as it sets the game back to near neutral range and you can’t capitalize on it as much. Then there’s the climax system which allows you to cancel moves, into super moves, into climax moves at the cost of a good chunk of your super meter. The combos you can pull off can be utterly devastating, but can cost a ton of meter, so they’re not going to be a regular occurrence, but when they show up, they usually turn the tide of battle.

And that’s King of Fighters XIV. In a nutshell, it’s a no nonsense fighting game experience that’s ready to go, right out the box. In an era where it’s more common to patch in features post launch in order to make a release date, it’s good to see the Atlus and SNK were committed to players receiving a completed game on the disc, what a novel idea. I’m not totally sold on the visuals, but that’s purely a personal preference. I thought the sprite work of the last two games was something to carry a legacy on, but that’s obviously not the intended direction for SNK. Still, this game is loaded with content, and offers plenty of characters so you’re bound to find someone that fits your playstyle. The new characters that they’ve added definitely give this game a fresh feel, while retaining some of the classic characters that we’re all familiar with, and with such an expansive roster, it’s surprising that it feels so balanced. Though I’m sure that will change after a few weeks of online play. If you’re a fan of King of Fighters, then there’s no reason to miss out on King of Fighters XIV.

Visual inconsistency aside, the newest entry in the King of Fighters proves to be one of its best. The gameplay and mechanics are as solid as ever and there's plenty for newcomers and old guard alike to enjoy.