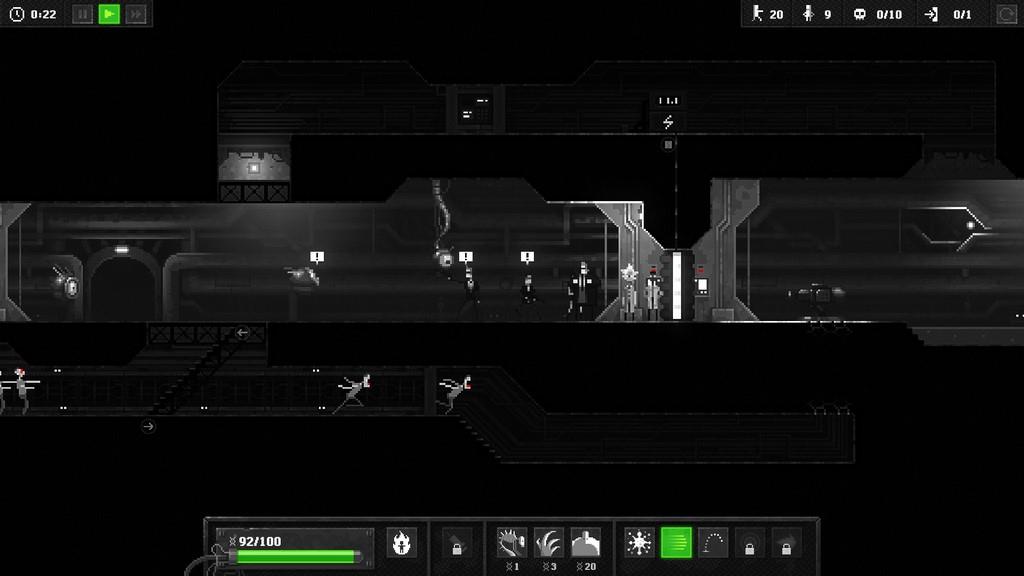 Zombie games are a dime a dozen. We passed peak zombie a long, long time ago. Games with 8-bit pixel art have also been done to death, often under the pretense of being “retro” or “arty” but let’s be honest, it’s because 8-bit graphics are cheap and easy to do. For every game that looks like Enter the Gungeon or Mercenary Kings, there are ten samey NES rip-offs. There are dozens of pixel-art zombie games cluttering up the Steam store right now, so what could one more possibly offer that the rest don’t? Well, gameplay genre for one, but it’s a stretch with a game like Zombie Night Terror, and your mileage may vary.

Remember Lemmings? The quirky puzzle game made by DMA Design way back in the 90s, before they were Rockstar Games? Well imagine Lemmings but with zombies and you’ll have a pretty good picture of Zombie Night Terror. The game consists of 40 levels where you must infect civilians, grow your horde of ghouls and then direct them through numerous obstacles in order to turn or kill a certain quantity of the humans in the level. This combination of genres seems brilliant on paper and initially it is, but the execution leaves something to be desired.

You start each stage with a limited number of syringes with which to strategically infect various humans around the level. Early on you can be fairly random about it, but after a level or two the humans start arming themselves. It might seem tempting to infect a human standing next to a guy with a shotgun or a katana, hoping that your fresh zombie will take out the threat, but more than likely the armed human will get wise and waste his newly-undead buddie in short order. It’s better to infect in an area full of unarmed humans and grow a small horde, so that you can overwhelm any armed humans with numbers.

Of course, this is just basic strategy and the game’s difficulty ramps up quickly. Levels become more complex with barricades, locked doors, fatal drops and weak floors that require a certain number of zombies to crumble. As the levels—and the humans—get more dangerous you can escalate by mutating zombies with powers that unlock the farther you progress. Mutations add new strategy to the puzzles, allowing you to turn one zombie into a conductor of sorts that directs the rest, give zombies the ability to leap over gaps, or inflate and explode. I ended up using the exploding zombies quite a lot, as not only do they blast apart obstacles but they infect every nearby human and grow your horde even more.

Naturally you have a limited number of infections to use, dictated by a power meter at the bottom of the screen. The only way to replenish this is by collecting barrels of toxic sludge, which are fairly scarce and tricky to get to in each level. By the time I hit a level where numerous infection types were needed and the armed human population started shredding my humble horde of undead, I realized this was less of a zombie game and more of a puzzle game under a thin coating of zombie guts. 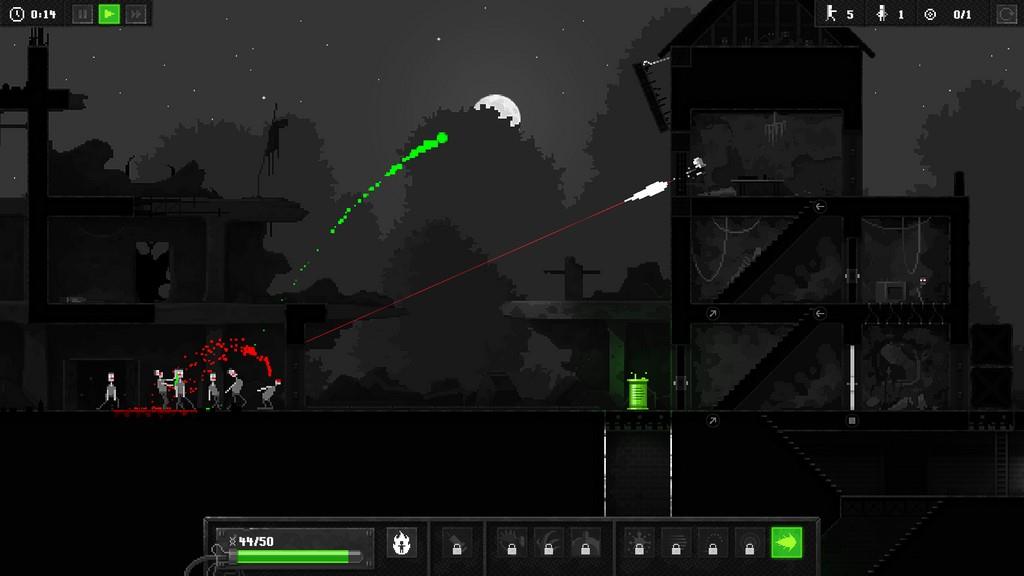 That’s not necessarily a bad thing but this game does make it difficult for newcomers to dig into it. To put it simply the difficulty ramps up too quickly; by the third level I was getting frustrated and actually wishing for a tutorial. Zombie Night Terror gives you a hefty toolbox of tricks and mutations but it doles them out slowly, and doesn’t do a very good job of telling you how to use them or in what circumstances. This leads to a lot of trial and error, which would be acceptable if the game had a reasonable save system.

Except that it doesn’t. The only way to progress and save your game is by beating the current level. With levels getting bigger and more devious early on, this turns into a real headache. No checkpoints, no mid-level marker, and certainly no quicksaves—you mess up, you start the level over. I can understand this kind of punitive difficulty on an old-school platformer or even a shooter, but in an environmental puzzle game? The whole point of a puzzler like this is experimentation, but Zombie Night Terror punishes you for doing anything except the obscure method to beat the current level.

This discourages clever solutions to the puzzles because you’re too worried about screwing up and starting a long, arduous level from scratch. This also complicates the game’s incredibly difficult special objectives. Each level has an extra goal to accomplish in addition to beating the level—something like kill all the humans or don’t lose any zombies—but I quickly ended up ignoring these extra goals. Going level to level is annoying enough as it is, and completing the bonuses requires true feats of zombie circus coordination, so only the truly dedicated or masochistic will even attempt these extra objectives. 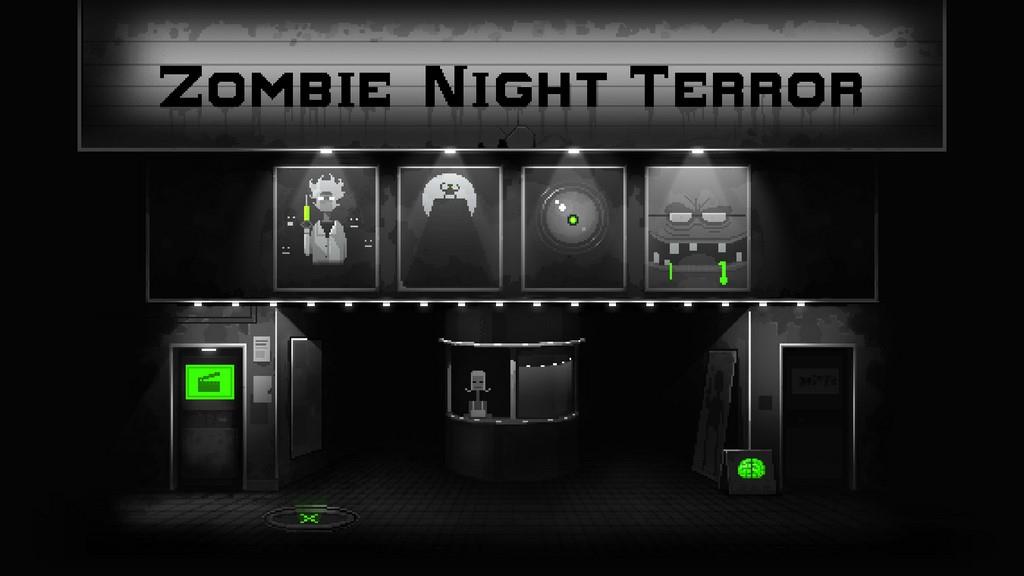 The game’s stubborn and obtuse nature makes it challenging to appreciate its production values. I enjoyed its clever use of low resolution characters and a limited color palette—lots of grungy grays, browns and predominantly black, with splashes of red and neon green. That said this is far from the first game to use a retro graphical style, and it can’t come close to the dynamic 16-bit carnage of Broforce or Not a Hero. The visuals here are intentionally limited, (dare I say restrained for a zombie game?) and the effect is appreciable if not outstanding.

Zombie Night Terror’s graphics get the job done, and that’s basically what I can say for the whole game. $12.99 for 40 levels isn’t bad, but there are puzzle games and zombie games for the same price or less that offer more content and more intuitive gameplay. If you’re itching for an environmental puzzler like this, I’d revisit Lemmings first. Zombie Night Terror is worth having for its strange mix of genres, but it doesn’t push either concept far enough to be truly enjoyable and its difficulty hampers the experience. I’d give it a try, but wait for a sale first.

Zombie Night Terror mixes the tired undead genre with the puzzle gameplay of the Lemming series, oddly enough. It works for the most part but the game is too difficult and obtuse for its own good. There is an enjoyable puzzler here, just expect to deal with some trial and error frustration along the way.